Read When the Dead Online 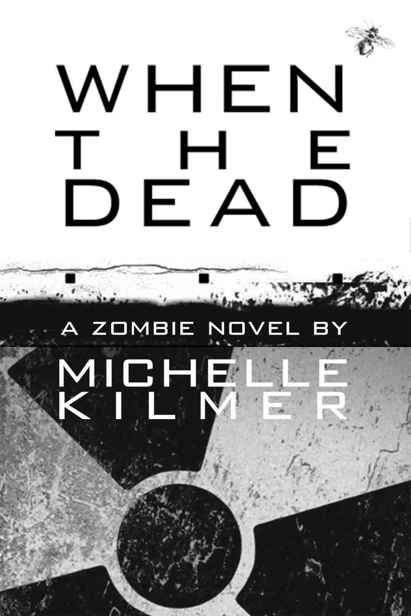 A Zombie Novel by Michelle
Kilmer

Any similarities to persons
living, dead or undead is purely coincidental.

the first type of person

who will do anything to survive,

my family and friends for the love
and support,

my editors Rachel and Rebecca
Hansen and

To my father who, in his time with
his children,

encouraged us to be creative,
unique and intrepid,

And to my wonderful husband

The Plague
in Pixels

Ben on the
Third Day

One for You
and Two for Me

No Blood on
Our Hands

Love in the
Dead Air

Our Own
Little World

Let it All
Out

(Below the)
Surface Wounds

Another Stab
in the Heart

A Glass of
Courage

Smoke on the
Horizon

Picking up
the Pieces

The Best Way
to Go

Versions of
the Truth

Out of the
Bag

The Trial of
Jeff Brown

It All Adds
Up

It
starts with a cold sweat then a swift drop in body temperature that makes the
teeth chatter. The skin feels itchy and hot but the insides are dying from the
cold.

Then the numbness starts in the extremities. Finger tips, toes, up
through the feet and hands into the legs and arms and finally the core. It
cannot be rubbed out as the hands do not work anymore.

It reaches the chest and the ability to control the breathing is lost.
Just before the last breath of air escapes the lungs, numbness reaches the
head.

The
eyes go crazy, the tongue limp. One cannot call out for help as the head falls
on the chest. There is but a single moment for the dying self to think a final
thought . . .

“I can’t
understand what they’re saying,” Edward said as he slammed a fist down on the
radio.

“You
could try another station. That sounds like French they’re speaking,” his wife
Moira suggested. She had wanted a television for a long time but Edward
preferred the way the voices came floating from the speakers into the apartment.
This meant that in the current situation though, they had to rely on the radio
show hosts graphic descriptions to give them any idea of what was going on in
cities across the globe.

“The
other stations keep replaying the same stuff. It’s not getting any better; only
worse,” Edward grumbled.

“Then
there’s nothing we can do but make some tea and wait to see what happens next.”

“It’s happening everywhere,” Isobel said to her mother over the phone.
She had spent the morning reading news articles online. She had watched a clip
of someone succumb to the infection on a CDC table, surrounded by plastic and
strapped down like a criminal or lunatic.

“Things will be ok, Isobel! They have a carrier. It really is only a
matter of time. If they can study it, they can find a cure or at least a
vaccine. Try to keep this thing from spreading any further.”

“It’s too big already. The world is fucked. I’ve got to go.” She hung up
the phone not knowing it would be the last time she’d speak to her mother.

“On
and on for three days, man; can’t they talk about something else?” Vaughn
turned off his television angrily. “Could have been aliens, maybe the
government, maybe bio-terrorists? Shut up.” He chucked a drained beer can at
the black screen. “Just fix it and forget it!”

Vaughn
was alone, as he often was, unless he paid for company. He was talking to
himself. He probably couldn’t even pay someone to listen to him. Especially
when he was drunk and that was most of the time.

“Couldn’t
be bio-terrorists, they’d a laid claim to it. Been proud of the trouble they
were causing. Pretty fancy stuff making dead people come back to life. It has
to be the government; only group with enough funding and closed doors to pull this
shit off.”

The infection was quickly spreading. It had reached terrorist groups and
government groups alike. It lay in thousands of sickbeds, it rode the bus, and
it lived next door to many already. No one was immune from this unstoppable
plague.

The number one cause for the spread of the disease was denial. It made no
sense
to anyone. News media could be blamed for the lies with headlines
like
It’s impossible!
,
Death is death, the final breath
, and
People
don’t come back. They stay wherever it is that they went
.

The Haunting of the Gemini by Jackie Barrett
Uneasy Relations by Aaron Elkins
Irrefutable Proof: Mars Origin "I" Series Book II by Abby L. Vandiver
Paris Is Always a Good Idea by Nicolas Barreau
The Straight Man - Roger L Simon by Roger L Simon
The Cockatrice Boys by Joan Aiken
The Worst Street in London: Foreword by Peter Ackroyd by Rule, Fiona
Watchers of Time by Charles Todd
Stay With Me (The Montgomery Brothers) by Chase, Samantha
Living Silence in Burma by Christina Fink