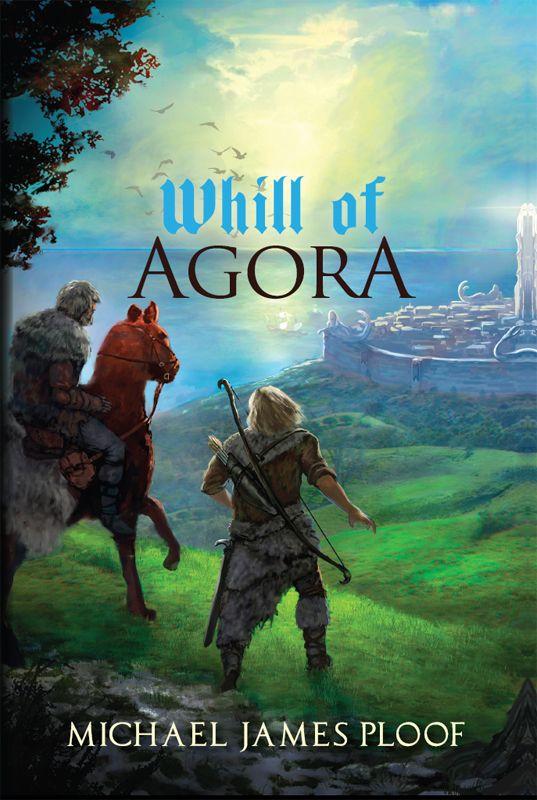 I would like to thank John E Barron III, who for years listened and encouraged the making of this story. His enthusiasm to see the work finished and his support in the publishing of the book were vital in making this a reality. I also thank my son Devin, who spent many late nights with me working out the kinks in the story.

This finished work I dedicate to my children, Devin and Destiny.

Chapter One: The Travelers

Chapter Seven: Farewell to the City of Light

Chapter Nine: An Ocean of Mystery

Chapter Eleven: The Road to the Mountain

Chapter Thirteen: A Tale of Betrayal

Chapter Fifteen: The Dwarves of Dy’Kore

Chapter Seventeen: The Maiden of Elladrindellia

Chapter Twenty-Four: The Meeting of the Kings

Chapter Twenty-Six: The Drums of War

The tale of the Battle for the Ebony Mountains

T
he full moon lingered like a magnificent pearl in an ocean of black. Fresh snow gave a faint crunch as the riders’ horses made their way down the old road. Cold, tired, and hungry, Whill and Abram rode silently toward Fendale.

Usually they would make camp with the setting of the sun, but not tonight. The storm they had encountered the previous two days had set them back many hours.

“We should still be in time for the Winter’s End Celebration,” Whill said.

“As long as we do not wander into another of those damned storms, we should be plenty early,” answered Abram as he scoured the woods. Something was on his mind, but Whill did not bother wondering what; he had thoughts of his own. Like the feast they would enjoy the next night, and the music. The Winter’s End Celebration of Fendale was always a great treat. It had been going on as long as anyone could remember. People came from all surrounding towns and villages to take part. Abram had brought Whill when he was only eleven years old, and Whill had marveled at all the dancers, jugglers, acrobats, and animal tamers that had performed. The knights of Eldalon had put on a mock battle, and Whill sat in awe for hours watching them dual and joust. He had read their history in the books Abram had given him as a young child. To see them in person had been a surreal experience. The celebration had lasted all day and long into the night. The food had been fit for kings, and the children had received candy. Whill, now nineteen years old, was no less excited than he had been when he was eleven.

“Do you think that King Mathus will attend this year?” wondered Whill. Abram did not reply. He lifted his hand, motioning Whill to stop. Whill gently slowed his horse and was about to ask what was wrong when Abram put a finger to his lips.

Whill surveyed the surrounding forest, but he saw nothing but the silhouettes of trees and the darkness beyond. Pine branches bent under the weight of the snow, as did the birches, which in some spots bowed down almost to the road. It was a world of white and black, shadows and moonlights. Minutes passed, and still Whill neither saw nor heard anything. He looked over at Abram, who sat like a statue upon his steed. Something indeed was wrong. Abram was not suffering from his usual excess of paranoia: it was too quiet. Lost in his thoughts of Fendale, Whill had not noticed, but now he did. In an almost inaudible whisper, Abram told him to ready his bow. Whill did so as silently as he could, with a sudden and intense feeling that someone was watching, waiting. He resisted the urge to turn and look, but sat as still as he could, bow in hand, his arrow ready. Abram had also readied his bow, and with a quick dart of his eyes he indicated a part of the woods in front and to the left of himself. Whill peered at the spot and at first saw nothing. Then he spotted sudden movement beyond the trees. It was a strange black shape, quick and silent, darting from behind one tree to hide behind another. It moved like a shadow, and Whill would have mistaken it for one if not for the moonlight reflected in its eyes. Whill’s horse gave a whine and began to stir, now alert to some danger. With a jerk Abram turned to scowl at the scared beast, and as he did the forest erupted with movement.

His heart hammering in his ears, Whill kicked the flanks of the horse, which was eager to comply. Even as it began to speed into a full gallop, Whill saw five black wolves dart out of the woods in front of them with alarming speed. Without looking he knew that more raced at them from behind. Before he could think he let loose an arrow at the closest wolf. With a cry the beast went headfirst into the snow, an arrow protruding from its neck. Even before the blood could flow, Whill had pulled another arrow as Abram took down another of the approaching pack.

Instead of scaring the remaining beasts, the fall of the two wolves only seemed to infuriate them. Baring teeth, they charged ever faster toward the riders. In unison Whill and Abram let loose their arrows and dropped the two closest wolves. Whill reached for another arrow to take down the last wolf when suddenly two more wolves jumped at the legs of Abram’s horse. Teeth snapping, they bit fiercely at its legs. A terrible cry issued from the horse as another wolf attacked its front legs. Distracted by the attacking wolves, they had forgotten about the oncoming wolf, which was now upon them. The wolf jumped up, jaws snapping, into the face of Whill’s horse. Whill struggled to stay mounted and lost hold of his bow. His horse reared, almost throwing him to the ground. Alert to his trouble, Abram shot the wolf in the side as it rebounded and prepared to lunge at the horse once more. Whill was now facing the right side of Abram’s horse, whose legs were being ripped apart by the other three attacking wolves. Abram’s horse jumped and kicked, trying to throw off the beasts, but they were too many. Whill drew his sword, ready to charge, when another wolf attacked his own horse from behind. He turned to see the wolf clawing its way up his horse’s back, and with a swift blow he chopped its head clean off. He turned, and to his horror he saw Abram’s horse go down under the wolves’ relentless attack. The three attacking wolves then lunged forward as one onto Abram. Jumping from his horse, Whill could not see Abram, only thick black coats of matted fur thrashing and jerking where Abram had been.

With a cry Whill attacked with his sword. In a frenzy of slashing metal, blood, and flying fur, he killed the wolves. In his fury he barely heard a low growl behind him. He turned to see a nightmarish sight: six more wolves less than ten feet away. They stood, hair raised, teeth bared, ready to attack. They uttered low, menacing growls, all except the largest, which barked ravenously at him. Whill knew why they hadn’t yet attacked. They were afraid.

Not knowing if Abram was alive or dead, Whill was not afraid but angry. Rage welled in him and erupted into a primal scream. The wolves tensed and backed a step. “Come on!” he screamed, challenging the wolves. “Come on!”

The wolves backed up, confused, looking at each other, at Whill, and at one another again. Their mouths were closed. Then the large wolf answered Whill’s challenge and charged straight at him, drool falling from his open mouth, and lunged for Whill’s neck. Whill dropped to his knees, and as the wolf passed over him he gutted the beast from neck to tail. The wolf landed in a dead heap. Another charged, and Whill thrust his sword and impaled the beast with a sickening crunch. Heaving the limp wolf to the side he ran at the remaining four, eyes wild, his own growl now echoing through the forest.

With their leader dead, the wolves quickly retreated in the presence of this fearless foe. Whill ran after them, actually wishing they would fight. He was so enraged, he had forgotten about Abram.

As the wolves ran for the forest, Whill returned to his fallen friend. Abram’s horse lay dying. Abram was pinned under the animal’s great weight, and three more dead wolves lay atop him. Whill heaved the wolves off and was devastated by what he saw. Blood covered every inch of Abram’s face. Whill knelt next to him, tears in his eyes, and began to wipe the blood away. Abram moaned and opened his eyes. Then, to Whill’s surprise, he smiled. “I thought we were in trouble there for a minute,” he said.

“Knock it off,” Abram grumbled, swatting his hand away. “I’m hurt but I’m not dying. The blood is mostly from the wolves. Now help me get out from under this poor horse.”

Whill heaved the saddle in an attempt to lift the horse enough to free Abram’s leg, but to no avail.

“Don’t bother. My leg isn’t broken. Just help me pull it free before those damned wolves get their courage back.”

Whill pulled on Abram’s leg above the knee. With many grunts and curses from Abram, the leg came free.

Whill now saw the wounds on Abram’s arms. Shreds of fabric hung from his sleeves, his hands were scratched and bloody, and large puncture wounds covered his hands and forearms where he had tried to fend off the beasts. Whill was amazed that Abram’s leg had not broken, but he guessed it was on account of the soft snow. He took some extra shirts from his bags to use as bandages, and a bottle of redclove.

“You did well,” said Abram as Whill began tearing the cloth into strips.

“Not well enough. You’re a bloody mess, and the horse is dead.”

“Stop being negative. It doesn’t become you.” Abram returned the smile. “You killed many wolves and haven’t a scratch. That’s quite a feat for any man.”

Whill began applying the redclove to Abram’s wounds. A quick hiss escaped Abram’s mouth as the liquid touched his torn flesh. Redclove worked well on such wounds but burned like a hot brand.

“Besides, we still have your horse,” said Abram through clenched teeth. “She can carry us both, and we can get a good bit of money for those wolf hides.”

Whill marveled at the way Abram could always find good in anything. Whill thought of the time their boat had sunk in the ocean. With no land in sight and their cargo lost, Abram had said, “Well, at least we still have our arms to swim to shore.” Whill had almost drowned laughing. Now he could only smile and thank the gods that Abram was with him. To lose Abram would be to lose his whole world.

God's Not Dead: Evidence for God in an Age of Uncertainty by Rice Broocks
I Was a Non-Blonde Cheerleader by Kieran Scott
Willows, Jennifer - Lust for Life [The Moreland Brothers 2] (Siren Publishing Allure) by Jennifer Willows
The Girl from the Garden by Parnaz Foroutan
Vision of Seduction by Cassie Ryan
Quid Pro Quo by L.A. Witt
Agatha H. And the Clockwork Princess by Phil Foglio, Kaja Foglio
Getting Away : A New Adult Romance Story (Young Adult Romance Books "Swanson Sisters Series" : Book 1) by Jones, Amelia
MAXIM: A New Type of Human (Oddily Series #2) by Pohring, Linda, Dewberry, Anne
Drop Dead on Recall by Sheila Webster Boneham