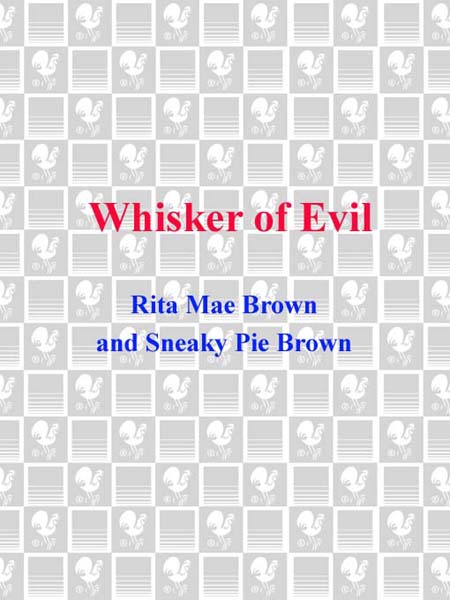 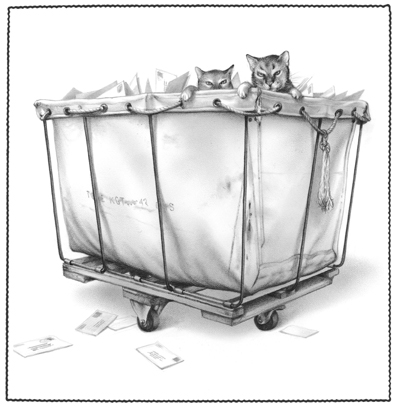 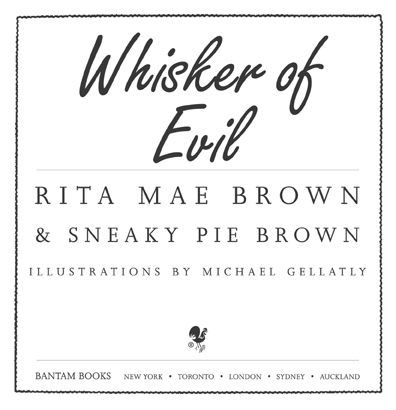 Letter to the Reader

Dedicated to
Judy Lynn Pastore.
Thank you for taking
in all those homeless
animals, including this stray.

Not being a medical person, I relied heavily on my far more intelligent friends who are trained in the medical arts.

Dr. Anne Bonda, along with keeping my horses healthy and happy, also provided rabies materials. “Dr. Anne” is both a gold mine of information and a godsend to humans and horses.

Dr. Mary T. O'Brien supplied facts, figures, and gruesome examples, bringing me up to speed concerning rabies in humans. It is, indeed, a dreadful disease and I am indebted to the good doctor for taking so much of her time to work with me.

Mrs. Jeanne Pitsenberger, a nurse with her own research firm, Foxdale Enterprises, piled folder upon folder on my desk. I have never worked with a researcher as organized, careful, or cheerful as Jeanne. No matter how absurd the question was I lobbed at her, shortly the answer was lobbed back.

Any mistakes in this book are due to my shortcomings and none of the above.

And concerning all of the above individuals, it is my privilege to know them. Apart from being good to me, these people cement together the communities in which we live. Our nation is filled with wonderful, giving people but it's the bums that get the headlines.

Mary Minor “Harry” Haristeen
The postmistress of Crozet, Virginia, is curious, sometimes bull-headed, and often in the midst of trouble. Her life is changing and she's struggling to change with it.

Tee Tucker
Harry's corgi bubbles with happiness and bravery in equal measure. She loves Harry as only a dog can love.

Pewter
Harry's gray cat affects aloofness but underneath it all, she does care. What irritates her are comments about her plumpness and her hunting abilities.

Mrs. Miranda Hogendobber
Miranda observes a great deal but keeps most of it to herself. A widow, she's a surrogate mother to Harry and the relationship means a great deal to both women.

Susan Tucker
Harry's best friend has been putting up with her friend's curiosity and attraction to danger since they were children. They have their ups and downs like most friends but they stick together.

Fair Haristeen, D.V.M.
Once Harry's childhood sweetheart and then her husband, he hopes to be her husband again. He has a good mind, a stout heart, and the patience to put up with her.

Olivia Craycroft
“BoomBoom” Once Harry's nemesis, the two have settled into a slightly strained rapprochement. BoomBoom is quite beautiful, a fact never lost on men.

Alicia Palmer
A former resident of Crozet, she keeps an estate there. She conquered Hollywood as an actress and now in her late fifties, she's coming home. She's retained all of her glamour while losing most of her illusions.

Rev. Herbert C. Jones
Beloved, humorous, fond of fishing, all of Crozet knows that when the chips are down, “The Rev” will come through.

Marilyn Sanburne
“Big Mim” The Queen of Crozet exerts her social power with whatever force is needed to accomplish her task. She can be a snob but she's fair in her own fashion and believes strongly in justice.

Jim Sanburne
As the mayor of Crozet, he presides over the town, which is easier to do sometimes than to be Big Mim's husband.

Marilyn Sanburne, Jr.
“Little Mim” She is emerging from her mother's influence. She's a contemporary of Harry, Susan, and BoomBoom but she's always been set apart by her family's wealth. She is the vice-mayor of Crozet and a Republican, which is quite interesting since her father is a Democrat.

Deputy Cynthia Cooper
A young, bright officer in the Sheriff's Department, she likes law enforcement but wonders if it keeps romance at bay. She's become a buddy of Harry's and the cats and dog like her, too.

Sheriff Rick Shaw
There are days now when Rick is tired of criminals, tired of their lies, tired of pressing the county commissioners for more funds. But when a murder occurs, he focuses his sharp mind to bring the pieces of the puzzle togetherâif only that damned Harry and her pets would get out of the way.

Mary Patricia Reines
Missing since 1974, she casts a lonely shadow over Crozet. She was wealthy, fun-loving, and strong-minded. She ran St. James Farm, breeding thoroughbreds for the track, and she was successful at it.

Tazio Chappars
A young architect of mixed race, she gets men's hearts racing. She's a rather serious sort of woman but kind and considerate.

Barry Monteith and Sugar Thierry
Two young men, partners in the thoroughbred breeding and lay-up operation, have made some good bloodline choices but some shaky choices in women.

Carmen Gamble
The young owner of Shear Heaven, a beauty parlor, exercises a sharp pair of scissors and a sharp tongue. She has energy to burn; if only she had money to burn.

B
arry Monteith was still breathing when Harry found him. His throat had been ripped out.

Tee Tucker, a corgi, racing ahead of Mary Minor Haristeen as well as the two cats, Mrs. Murphy and Pewter, found him first.

Barry was on his back, eyes open, gasping and gurgling, life ebbing with each spasm. He did not recognize Tucker nor Harry when they reached him.

“Barry, Barry.” Harry tried to comfort him, hoping he could hear her. “It will be all right,” she said, knowing perfectly well he was dying.

Gently, Harry took the young man's hand and prayed, “Dear Lord, receive into thy bosom the soul of Barry Monteith, a good man.” Tears welled in her eyes.

Barry jerked, then his suffering ended.

Death, often so shocking to city dwellers, was part of life here in the country. A hawk would swoop down to carry away the chick while the biddy screamed useless defiance. A bull would break his hip and need to be put down. And one day an old farmer would slowly walk to his tractor only to discover he couldn't climb into the seat. The Angel of Death placed his hand on the stooping shoulder.

It appeared the Angel had offered little peaceful deliverance to Barry Monteith, thirty-four, fit, handsome with brown curly hair, and fun-loving. Barry had started his own business, breeding thoroughbreds, a year ago, with a business partner, Sugar Thierry.

That Saturday morning, crisp, clear, and beautiful, had held the alluring promise of a perfect May 29. The promise had just curdled.

Harry had finished her early-morning chores and, despite a list of projects, decided to take a walk for an hour. She followed Potlicker Creek to see if the beavers had built any new dams. Barry was sprawled at the creek's edge on a dirt road two miles from her farm that wound up over the mountains into adjoining Augusta County. It edged the vast land holdings of Tally Urquhart, who, well into her nineties and spry, loathed traffic. Three cars constituted traffic in her mind. The only time the road saw much use was during deer-hunting season in the fall.

“Tucker, Mrs. Murphy, and Pewter, stay. I'm going to run to Tally's and phone the sheriff.”

If Harry hit a steady lope, crossed the fields and one set of woods, she figured she could reach the phone in Tally's stable within fifteen minutes, though the pitch and roll of the land including one steep ravine would cost time.

As she left her animals, they inspected Barry.

“What could rip his throat like that? A bear swipe?”
Pewter's pupils widened.

The cat curled her upper lip to waft more scent into her nostrils. The dog, whose nose was much longer and nostrils larger, simply inhaled.

“I don't smell bear,”
Tucker declared.
“That's an overpowering scent, and on a morning like this it would stick.”

Pewter, who cherished luxury and beauty, found that Barry's corpse disturbed her equilibrium.
“Let's be grateful we found him today and not three days from now.”

“Stop jabbering, Pewter, and look around, will you? Look for tracks.”

Grumbling, the gray cat daintily stepped down the dirt road.
“You mean like car tracks?”

“Yes, or animal tracks,”
Mrs. Murphy directed, then returned her attention to Tucker.
“Even though coyote scent isn't as strong as bear, we'd still smell a whiff. Bobcat? I don't smell anything like that. Or dog. There are wild dogs and wild pigs back in the mountains. The humans don't even realize they're there.”

Tucker cocked her perfectly shaped head.
“No dirt around the wound. No saliva, either.”

“I don't see anything. Not even a birdie foot,”
Pewter, irritated, called out from a hundred yards down the road.

“Well, go across the creek then and look over there.”
Mrs. Murphy's patience wore thin.

“And get my paws wet?”
Pewter's voice rose.

Angrily, Pewter puffed up, tearing past them to launch herself over the ford. She almost made it, but a splash indicated she'd gotten her hind paws wet.

If circumstances had been different, Mrs. Murphy and Tucker would have laughed. Instead, they returned to Barry.

“I can't identify the animal that tore him up.”
The tiger shook her head.

“Well, the wound is jagged but clean. Like I said, no dirt.”
Tucker studied the folds of flesh laid back.

“He was killed lying down,”
the cat sagely noted.
“If he was standing up, don't you think blood would be everywhere?”

“Not necessarily,”
the dog replied, thinking how strong heartbeats sent blood straight out from the jugular. Tucker was puzzled by the odd calmness of the scene.

“Pewter, have you found anything on that side?”

“I hate it when you're bossy.”
Nonetheless, Pewter moved down the dirt road heading west.

“Barry was such a nice man.”
Tucker mournfully looked at the square-jawed face, wide-open eyes staring at heaven.

Mrs. Murphy circled the body. “
Tucker, I'm climbing up that sycamore. If I look down maybe I'll see something.”

Her claws, razor sharp, dug into the thin surface of the tree, strips of darker outer bark peeling, exposing the whitish underbark. The odor of fresh water, of the tufted titmouse above her, all informed her. She scanned around for broken limbs, bent bushes, anything indicating Barryâother humans or large animalsâhad traveled to this spot avoiding the dirt road.

“Big fat nothing.”
The gray kitty noted that her hind paws were wet. She was getting little clods of dirt stuck between her toes. This bothered her more than Barry did. After all, he was dead. Nothing she could do for him. But the hardening brown earth between her toes, that was discomfiting.

“
Well, come on back. We'll wait for Mom.”
Mrs. Murphy dropped her hind legs over the limb where she was sitting. Her hind paws reached for the trunk, the claws dug in, and she released her grip, swinging her front paws to the trunk. She backed down.

Tucker touched noses with Pewter, who had recrossed the creek more successfully this time.

Mrs. Murphy came up and sat beside them.

“Hope his face doesn't change colors while we're waiting for the humans. I hate that. They get all mottled.”
Pewter wrinkled her nose.

In the distance they heard sirens.

“
Bet they won't know what to make of this, either
,” Tucker said.

“It's peculiar.”
Mrs. Murphy turned her head in the direction of the sirens.

“Weird and creepy.”
Pewter pronounced judgment as she picked at her hind toes, and she was right.

Gryphon by Charles Baxter
A Mating of Hawks by Jeanne Williams
Sacrifice by Andrew Vachss
Impulse by Candace Camp
Springboard by Tom Clancy
Dance of Ashes and Smoke (Age of Monsters Book 1) by Harley Gordon
The Place Will Comfort You by Naama Goldstein
Dead Line by Stella Rimington
Dreaming Of Your Love (Hollywood Legends #3) by Mary J. Williams
Madison and Jefferson by Nancy Isenberg, Andrew Burstein