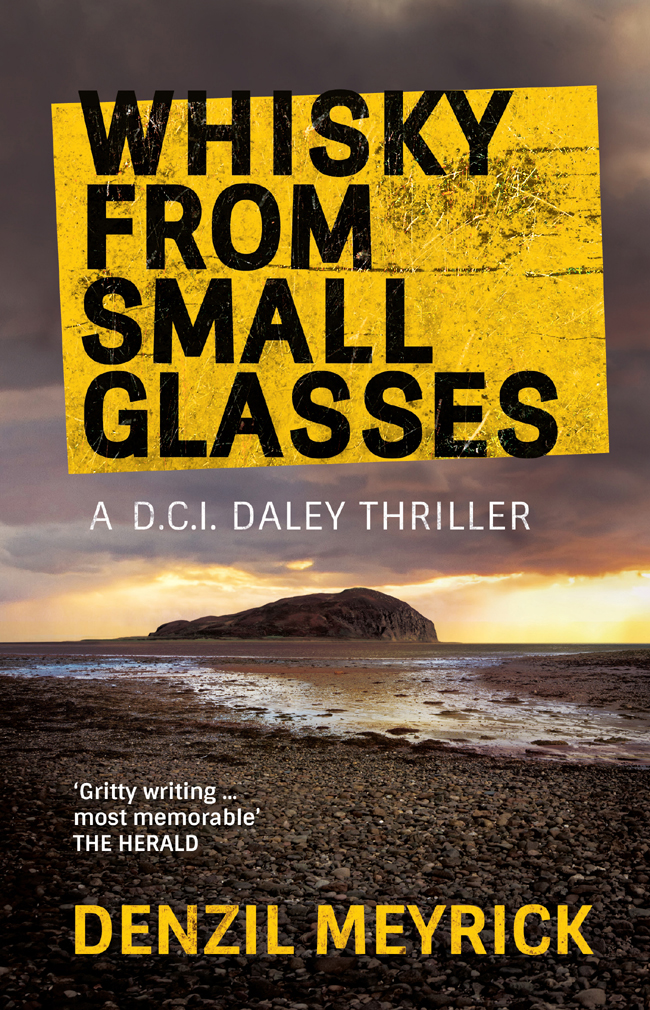 Praise for Denzil Meyrick and the
D.C.I. Daley thriller series:

‘The right amount of authenticity . . . gritty writing . . .
most memorable’
The Herald

‘Following in the tradition of great Scottish crime writers,
Denzil Meyrick has turned out a cracking, tenacious thriller
of a read. If you favour the authentic and credible, you are in
safe hands’
Lovereading

‘Soon to be mentioned in the same breath as authors such as
Alex Gray, Denise Mina and Stuart MacBride . . . very
impressive’
Ian Baillie,
Lennox Herald

A note on the author

Denzil Meyrick was born in Glasgow and brought up in Campbeltown. After studying politics, he pursued a varied career including time spent as a police officer, freelance journalist, and director of several companies in the engineering, leisure and marketing sectors. He lives on Loch Lomond side with his wife Fiona.

The right of Denzil Meyrick to be identified as the author of this work has been asserted in accordance with the Copyright, Design and Patent Act 1988.

British Library Cataloguing-in-Publication Data
A catalogue record for this book is available on request from the British Library.

For Fiona, Rachel and Sian

Lights sparked and flashed before her eyes. The movement of her limbs slowed as though of its own accord. The pain she had felt was dull now; the panic subsiding. She was aware that her bowels had opened; she no longer cared. Her last emotions were a fading mixture of anger, injustice and overwhelming sadness, the cause of which she could barely recall.

Suddenly, as the light began to dim, the face of a small, blond, blue-eyed child filled her thoughts. Only for an instant did the terrible choking pain, the struggle for breath, the fight to stay alive, return.

The body ebbed and flowed rhythmically in concert with the seaweed and flotsam and jetsam trapped in the bay of the low, rocky cove. A Styrofoam cup, a fisherman’s glove with three fingers missing, a drinks bottle, the label so bleached by sun and sea that only a hint of its former contents were now discernible, and orange plastic netting which had ensnared a small crab, reluctant to quit the purpose for which it was intended: all of these floated and bobbed in unison with the corpse.

The naked body of a woman lay face down in the water, limbs spread in a lazy ‘X’ shape. Her skin looked waxy – a horrible cross between yellow and grey, turning black at her feet, hands and the back of her neck. The remains were bloated, consistent with time spent in water. Small areas of her lower back and thighs were gnawed, most likely by prawns, indicating the corpse had spent at least some time further out to sea.

Surprisingly though, and most repellent, were the two bright red ribbons that held her hair in bunches, a hairstyle redolent of childhood and happiness, horribly incongruous with the rotting corpse now souring the sea tang of the mild spring day.

With almost six years’ service in uniform, Detective Constable Archie Fraser was new to the CID. So new in fact that he hoped he was surveying the scene on the beach with what could be considered the appropriate degree of professional detachment. A young female PC and the pale dog-walker who had alerted the police looked on with the mixture of abject horror and fascination so common in humanity faced with death; especially of the gruesome variety. A large black Labrador snuffled and pawed at the sand, undisturbed by the corpse.

‘Could you put your dog back on the lead, please, Mrs MacPherson?’ Fraser bellowed with a confidence he did not feel. It would not be beyond possibility for the dog to catch an unusual scent on the air and wade into the water to investigate its source.

His short time in Kinloch had already been difficult. Only last month his ultimate superior – one Inspector MacLeod, Sub-Divisional Commander – had cause to reprimand him on discovering a young female shoplifter handcuffed to a very hot radiator while her captor answered an urgent call of nature.

‘Focus, boy, focus!’ MacLeod had shouted in his high-pitched Highland accent. ‘The last thing I need is the Discipline Branch descending on me because you’ve seen fit to roast some daft bint. You’re bloody lucky she was too stupid to make the complaint.’

Fraser had noticed how his boss referred to
the
something, in the way a foreigner would; tourists regularly took him for a German or Scandinavian, and not from the Isle of Harris that was his home. A long period of admonishment ensued, after which Fraser resolved to improve in every way and pay many less visits to the Taste of India restaurant.

‘Karen, could you come over, please?’ Fraser summoned the PC.

She walked slowly towards him, never taking her eyes from the body, in the way a child would, having been asked to pat a snake.

‘What’s up?’ he enquired. ‘Surely this isn’t your first stiff?’ Her doe-eyed nod was barely perceptible. Having worked his probationary period in Glasgow, Fraser was no stranger to dead bodies: murders, drowning, suicides, accidents – occasionally even some natural deaths. All were part of the daily diet of Glasgow’s finest. The difference now was that for the time being at least the crime scene was his responsibility. No van full of colleagues likely to appear; the Serious Crime Squad over a hundred miles away; even his DS off sick, laid low with a persistent ‘early retirement’ back. Right here, right now, he was the senior CID officer on duty in the Sub-Division, in fact the only CID officer on duty in the Sub-Division.

‘It’s no’ jeest that, Archie.’ The PC had a strong local accent. ‘I mean, this is Kinloch – I probably know her.’

How could he forget? The crime locus was three miles away from one of the most unique places he had ever been to, let alone lived and worked in. Kinloch. The town was situated on a peninsula one hundred and fifty miles away from Glasgow, on Scotland’s rugged west coast; alternatively, miles away from anywhere, as Fraser had come to think of it. Around ten thousand people lived in what could best be described as a modern alternative to the 1950s. Everyone knew everyone else, down to the tiniest detail of family, even personal, life. Sometimes, when working on a case, the young policeman had the distinct impression that everybody knew what he was trying to find out, but of course were never going to tell.

Another symptom of such a close-knit community was an inherent distrust of strangers, including policemen. Fraser’s uncle, himself a retired police officer, had advised him always to have friends outside ‘The Job’, as the force was habitually known to initiates. He believed that because many cops both worked and socialised together, it left them isolated, introverted and out of touch. ‘You keep your ear to the ground, son, especially in a wee place like Kinloch,’ Uncle Davie had declared sagely. ‘I mean, you’re never goin’ tae find anything oot about these people unless you get out an’ talk tae them. Socialise, spend a few bob, buy a couple o’ drinks, and you’ll see they’ll soon open up.’

Archie had mixed feelings about this strategic advice: for a start, Davie had had his ear to the ground, and bought so many drinks, and so regularly, that he was now awaiting a liver transplant. Also, this was Kinloch, a place most definitely apart. However, he thought that some of what Davie had said could be useful. As the town was his first posting as a DC, he resolved to immerse himself in the community. He tried to join the local golf club, though sadly they were full. Unabashed, he tried the local tennis and cricket clubs, both with the same result. He was briefly elated when the town’s Gaelic choir had contacted him in the hope he could swell their dwindling numbers; sadly Fraser was about as tone deaf as it was possible to be.

He had tried visiting the local pubs when off duty. Kinloch had a goodly number of such establishments – far too many according to some of the town’s more temperate residents. They conformed to small communities within the community. For instance, regulars at the Shore Bar wouldn’t consider crossing the threshold of the Royal
Borough across the road. Subtly, each establishment catered for a slightly different clientele: rowdy youths attended Pulse, a noisy club bar in the Main Street, while their more cerebral peers became habitués of the Old Bothy, in the square. Roman Catholics preferred the Douglas Arms, while so-called ‘blue noses’ headed for the Royal. There was a pub that catered for lawyers, doctors and businessmen; another favoured by tradesmen and factory workers; and one hostelry, situated conveniently next to the bookmakers on the High Street, was dedicated solely to horse racing, the ‘sport of kings’ playing 24/7 on large screens. Jenny’s, tucked away in a small back street, was the end of the line. Those who behaved badly enough to be banned from all the other premises – and many had – gravitated there. The ‘tick book’ was legendary, as were the fights. Locals referred to it as the
‘Star Wars
Bar’, for reasons that were obvious.

Fraser had visited them all. Typically, as he walked into the room the conversation would stop, resuming in a more modulated fashion moments later. People would gradually drift away, leaving the young detective with one of Kinloch’s small army of drunks who barely knew nor cared where they drank, as well as a glaring publican, counting the cost of lost customers.

The young officer had not considered this. ‘Right, Karen, time to get your feet wet. We’ll need to get her above the water line. Even if we corrupt forensics it’s better than her ending up on Islay.’

‘Can ye no’ dae it yersel’, Archie? This gies me the dry boak.’ Fraser gently reminded her why she was being paid, and after removing shoes, tights and socks where appropriate, the pair waded into the few inches of water.

All to Play For by Heather Peace
Cherishing You by JoRae Andrews
On Tour by Christina A. Burke
Sara's Song by Sandra Edwards
The Promise (The Coven Series) by Baker, Apryl
Murder at Teatime by Stefanie Matteson
A Dog's Breakfast by Annie Graves
Storm and Steel by Jon Sprunk
Ladle to the Grave (A Soup Lover's Mystery Book 4) by Connie Archer
Mantle: The Return of the Sha by Gary Bregar