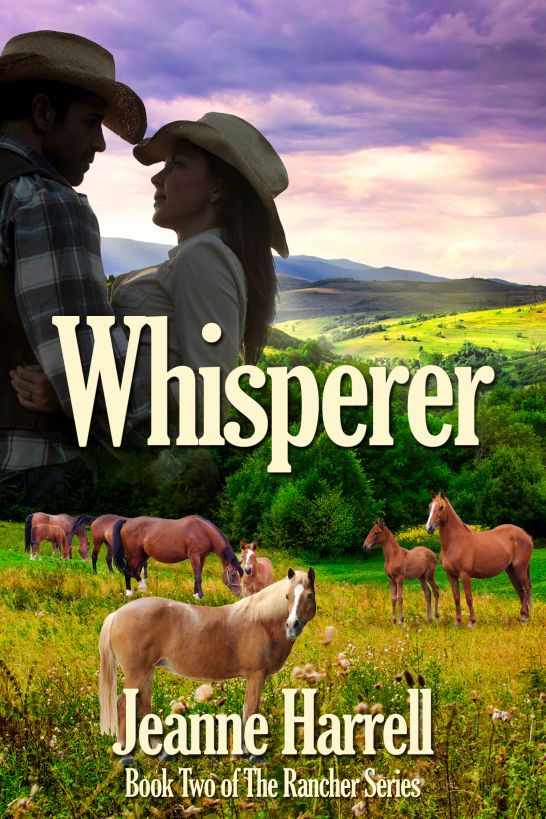 Thank you for
downloading my book! I am happy that you have made it part of your
library.

No part of this
book may be reproduced or transmitted in any form or by any means,
electronic or mechanical, including photocopying, recording or by
any information storage and retrieval system, without permission in
writing from the author and/or publisher. No part of this
publication may be sold or hired, without written permission from
the author.

Other books by Jeanne Harrell:

“
My heart is, and always will be yours.”

Hugh Grant in
Sense
and Sensibility

The night he
was born was a wild one. The wind blew stoplights down, thunder
rattled the town over and over, and rain beat so hard at the
windows, the glass was in danger of breaking. Even with all the
turbulence, his mother Lily was calm when he was put into her arms
for the first time. She knew he would be special. The line of his
face was perfect. Smiling faces agreed with her.

Growing up,
they always knew if he disappeared, they could find him in the
stables with the horses. The stables would frighten his brothers
and sisters, but never him. From the beginning, his knack with
horses was uncanny. Boy and animal seemed to understand each other
and it was inexplicable. His father, Sandy, had a favorite
Appaloosa named Anna. Sometimes he could be found curled up by
Anna’s feet, but she never harmed him—an incredible feat for a
horse 15.5 hands high, weighing five hundred pounds.

He and older
brother Jesse would often ride with their father to check the
cattle on their sprawling ranch. His mother wouldn’t let him sit a
horse until he was three, but he was a natural even then. By the
time he was eight, he and the vet figured out problems with the
horses together. For a while, it looked like he wanted to be a
veterinarian. --- But fate had other plans for him.

Colt Johnson
knew that communicating with and helping horses was all he really
wanted to do.And that talent would take him to many places,
familiar and unknown, in his lifetime. It would be his love of
horses that would lead him to another love.

The Sierra
Mountain Ranges in Nevada were rugged, strong and insurmountable.
Sierra means ‘saw’ in Spanish, which is appropriate because the
mountains look like the teeth of a saw with their granite rock
offerings dwindling down to lower elevations. Just up the road was
beautiful Lake Tahoe, a clear, freshwater lake with an elevation of
over 6,000 feet. Various canyons in the glacially scoured area
included Hetch Hetchy Valley, Yosemite and Kings Canyon. The groves
of giant sequoias occurred along a narrow band of a lower altitude
on the western side of the Sierra Nevadas. On the east side lay the
town of Naples, just south of Carson City, where the Johnson family
had resided for six generations and would endure for many
generations more. Their ranch was a sprawling two thousand acres.
Cattle raised there were unique, expensive and sold all over the
world. Colt Johnson was a sixth generation Nevadan.

“Dad, I know
what you’re saying, but I think I need to get more practice,” said
Colt.

“Son, I hear
what you’re saying too, but why do you need to go to Sonoma? Why do
you think Grandpa Sam can help you?” Sandy, his father, was trying
to understand his thinking.

“Grandpa’s been
training horses for probably forty years and I think I would learn
a lot from him.”

“Honey, I think
Grandpa would learn more from you, than you from him,” said Lily,
his mother. “You know you have a way with horses that none of us
understands. Why Sonoma?”

“It’s not
something I can explain, but feel. That probably makes no sense --
my saying that feelings count more than facts, but that’s about
it.” He looked at his mother for confirmation. She was still so
beautiful with all that luxurious black hair. No wonder his
fair-haired father had fallen head over heels for her. But he also
knew Lily believed in fate. It’s what brought her to Naples in the
first place to meet her beloved husband, Sandy. Lily smiled at
him.

“You know,
Grandpa will love having you, as will Grandma Jeanne. They are up
there at this time of year and will gladly help you with anything.
Like they did with Meggie.”

Sam Cable,
Lily’s dad, had married Jeanne Johnson, Sandy’s mom, the year after
Sandy and Lily had married. Their relationship went back a long way
– back to when they were in grade school. They lived part of the
year in her home in Naples, Nevada and the rest of the year at
Sam’s ranch in Sonoma, up in northern California. Sam and Jeanne
had taken in their granddaughter Meg for a while, while she
attended the Culinary Arts Institute in Napa Valley. It appears
that Meg, named for Lily’s mother Margaret, had inherited her
grandmother’s cooking skills as well as her name.

Sandy frowned
at him. “I thought you and Jesse would take over the ranch together
someday. What happened to that idea? That’s what you said you
always wanted.”

“Jesse can take
care of the ranch for now. I’ll help him when he needs it, but I
want to try some things on my own. It’s what I need to do.” Colt
looked at his mother and father, whom he loved. He was his parents’
first child together—His brother, Jesse, had been five when Sandy
married Lily. He knew what a special bond they had with each other
and it was partially because of him. It was hard to break away.

Minutes passed.
Sandy and Lily looked at each other remembering that torrential
night in the barn all those years ago, when they had discovered the
love they felt for each other. Colt might have been conceived that
night—an unforgettable night. An unforgettable child and now,
man…Yes, he had to find his own way. Sandy took a good look at
him—over six feet tall with wavy black hair like his pretty mother.
He was incredibly good-looking and had always been a good son. He
hadn’t been in half as much trouble as his younger brothers --Only
twenty-four, but wise beyond his years.

“So will you
call your grandparents tomorrow? They should know that you’re
coming and be prepared.” Lily looked at her husband.

“Absolutely,
call first. They will want to arrange something. Maybe a trip to
the Hitching Post Restaurant.” Sandy smiled at Lily, remembering a
trip there a long time ago. Lily’s father, Sam, was not too sure
that Sandy was the man for his little girl. It took a while to
smooth everything out.

Lily smiled
back at Sandy in remembrance. “God forbid, he should take our son
there,” she said and then laughed.

“I’ll be fine,”
said Colt. “Actually, I already called and they are expecting me
sometime late tomorrow.” He paused wondering how his mother would
react.

“Colt, I love
you more than life, and I want you to be happy. Please say that you
will come back to visit, because I need to know that.” Lily looked
away, fresh tears on her cheeks. Sandy took her hands in his.

Colt and his
mother hugged and she kissed him on one cheek. He shook hands with
his father and then hugged him as well. He went off to pack.

Sandy looked at
his wife. “Sweetheart, you knew this day would come. He can take
care of himself and he has a gift. It’s time he used it,” said
Sandy. “All our children are talented. He isn’t the first to leave
home.”

“I know. But
there’s something about Colt that is so special. He seems bound for
greater things.” Lily smiled at her husband. They studied each
other; a little older perhaps, but the love they felt was as strong
as it had ever been. Colt would be fine.

“On to Sonoma
then.”

Lily went into
the kitchen to make some fudge. The best in three counties, Sandy
said…

The drive to
Sonoma would take about four hours. Colt watched Nevada leaving in
his rear-view mirror and California beckoning him up ahead. His
home was Nevada and always would be. Colt knew he’d come back—but
not just yet.

Going up the
road to Tahoe, the huge lake soon spread out before him. That icy,
blue lake ringed with tall pines and various mountain ranges was
the site of many happy memories—a few of them flashed through his
mind as he drove through the town of South Lake Tahoe. His dad had
brought him and his other siblings up to Lake Tahoe fishing many
times over the years. They had fished for mackinaw – a great
tasting variety of trout. His mind wandered to a particularly funny
occasion…

His younger
brothers, Miles and Joey, twins, had apparently been born to

create a
little havoc and turmoil in the Johnson family. Colt smiled at the
memory of their first infamous boat trip on their own. Even though
Dad had taught them boating safety and they had practiced with the
equipment, Miles forgot to put the plug in the boat before
launching it, or so Joey claimed. Dad had bought them a pretty nice
aluminum fishing boat complete with all the fishing equipment they
would need.

Somewhere in
the middle of Lake Tahoe, the boat started taking in water. Joey
had a soda cup bought at a convenience store that he was
desperately trying to bail the boat out with. It was a losing
battle… They started sinking and faster than they thought possible.
Other boaters came by to rescue his brothers, but by the time
Harbor Patrol got to the boat, it was nearly submerged. All the
fishing equipment was lost and the boat eventually sunk. Colt
laughed as he remembered the twins had flipped a coin to see who
was going to call Dad. He had driven up with his pretty pissed-off
father to get the boys and couldn’t control his laughter… After
making sure they were all right, Dad yelled at Miles, then Joey,
then Miles again. They were only teenagers then, but Sandy wouldn’t
let them use a boat alone for a very long time after that escapade.
Just one of many… Miles was a published author now and had used the
story in one of his books. Dad still wasn’t pleased, reliving the
whole story in print, although Mother had doubled over laughing…
Colt smiled. He had a nice family…

Driving into
Sacramento meant lunchtime. Sacramento was a large city with lots
of suburbs and too much traffic. Colt decided to go to Old Town for
lunch, as his family had done many times over the years, driving to
see his grandparents in Sonoma. Old Town had a wonderful train
museum that he had visited many times as a kid. He had had an
obsession with trains that lasted a few years -- He still had lots
of toy trains packed away. Colt decided to grab a hamburger in the
little restaurant next door to it.

Female Friends by Fay Weldon
(6/13) Gossip from Thrush Green by Read, Miss
Just Wait For Me (Highland Gardens Book 3) by Dawn Marie Hamilton
Give Us This Day by Delderfield, R.F.
Unicorn Rampant by Nigel Tranter
The Way of Things: Upper Kingdom Boxed Set: Books 1, 2 and 3 in the Tails of the Upper Kingdom by Dickson, H. Leighton
The Secret Soldier by Berenson, Alex
The Burden of Doubt by Angela Dracup
Oz Reimagined: New Tales from the Emerald City and Beyond by Unknown
Shadow of Guilt by Patrick Quentin