Read Whispers in the Dark Online

Whispers in the Dark 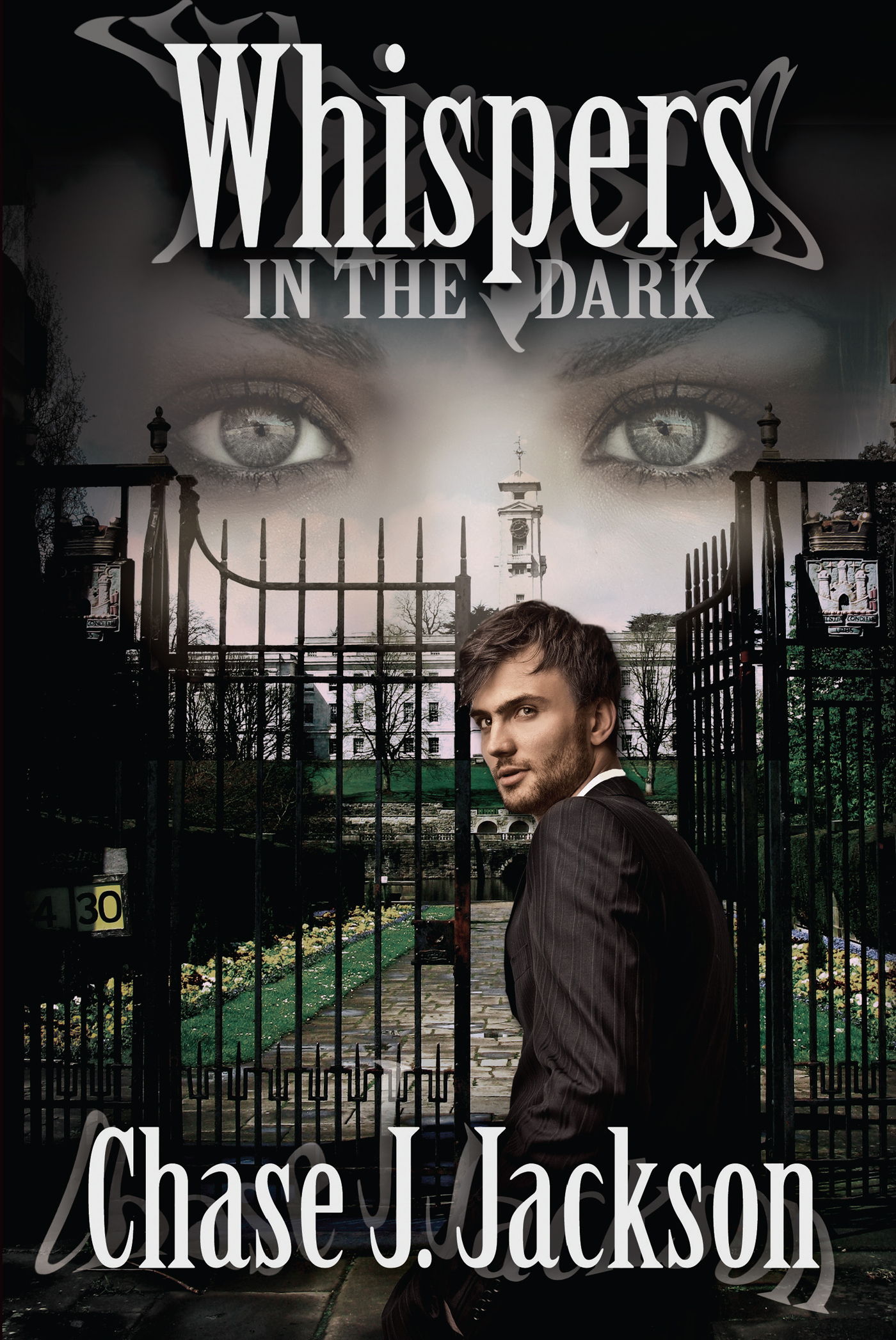 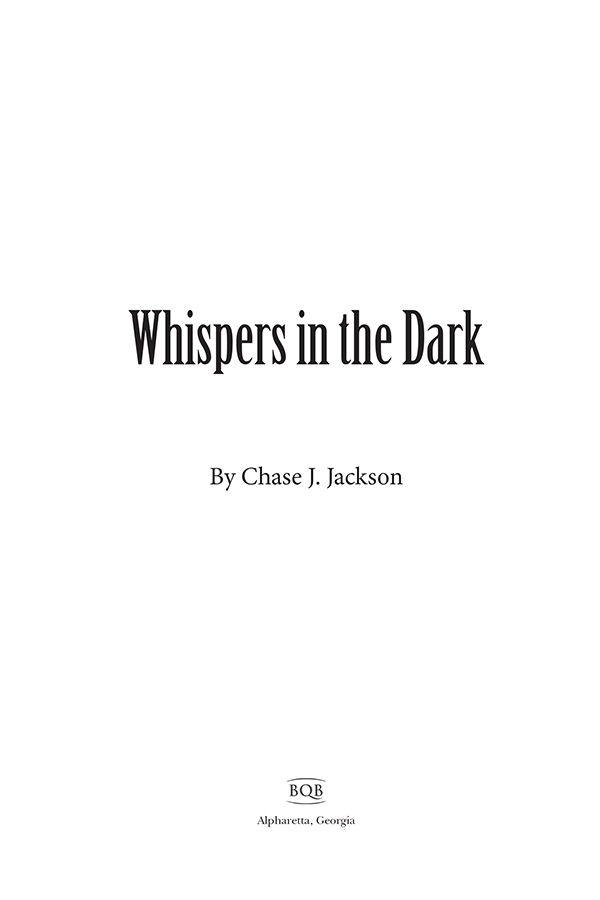 Whispers in the Dark

No part of this book may be reproduced in any form or by any means, electronic, mechanical,
digital, photocopying, or recording, except for the inclusion in a review, without
permission in writing from the publisher.

This is a work of fiction. All of the characters, names, incidents, organizations,
and dialogue in this novel are either the products of the author's imagination or
are used fictitiously.

Published in the United States by BQB Publishing

D
edicated to my amazing mother, Doris A. Jackson, who told me that when I was in
the womb, she would lie down in her bed and with her index finger, write her ideas
in the air. Thank you for instilling in me the importance of writing and for pushing
me to keep chasing my dreams.

G
od, if you could just get me through this night, I promise I'll go to church more.

Well, at least twice a month
, I thought, as I drove through the pelting rain in the
dark. My windshield wipers were so worn out they were barely getting the water off
the window. The crashing sound of the rain was punctuated by claps of thunder. To
make matters even worse, my phone had died, which meant I couldn't use my GPS, and
I couldn't find my charger. I hoped I was headed the right way to my new house. My
eyelids felt like they weighed a ton. A pitch-black, curvy country road, and here
I was half asleep. But that's an understatement. I was beyond sleepy. My eyes had
never felt this heavy before, and my body was just exhausted. I could barely tell
if I was awake, and the sound of the windshield wipers and pouring rain was making
me even sleepier.

“Let's see what's on the radio,” I said out loud. I started scanning through the
radio stations.

That kept me alert for a few minutes, then my radio started to lose its signal. I
might as well turn it off.

I let out one long yawn that just felt so good, but then my eyes started to water.
I knew they were already bloodshot. If only I could rest them a
little. Just for
two seconds. Maybe three. My eyes were winning this battle, and one second wouldn't
. . .

I heard a car horn. “Oh, God!” I yelled. I had slowly merged into the opposite lane.
I swerved back into my lane.

My heart was beating five times faster now, and I was shaking.

I let all the windows down to allow the cold air in, but rain pelted hard into the
car, so I had to close them. I reached down and grabbed a bottle of water and started
drinking as much as I could, then poured the rest all over my face. The water hitting
my face put me back on high alert. I was okay now. Hopefully.

As I wiped my face, I suddenly heard voices. I thought I'd turned the radio off.
I checked the radio. It
was
offâthe voices were coming from my backseat. I looked
in my rearview mirror and saw a figure rise from the backseat.

Suddenly, the figure wrapped a wire around my neck! My whole body went numb with
fear. I couldn't breathe. I gasped for air, but the more I tried, the more painfully
the wire cut into my throat. I tried grabbing the wire with my left hand, and I could
feel the blood from my neck trickling down my fingers. The wire got tighter and tighter
around my neck.

My right hand let the steering wheel go as I struggled to get the wire off, and the
car started to veer into the opposite lane. I saw the headlights of a tractor trailer
heading right toward me.

“Ahh!” I screamed out in pain, kicking, twisting, doing everything I could to fight
for my life. I had no choice but to brace myself for a head-on collision with the
tractor trailer. The headlights came closer and closer. The truck's horn rang through
the night air. This was it.
Noooo!

I woke up, breathing fast and heavy, to the sound of my friends Justin and Greedy
laughing hysterically.

“No!” I yelled, gasping. I was having another panic attack. I couldn't even get my
words together to start yelling at them. Then it hit me, and I was brought back to
reality. I was in my friend Justin's pickup truck; he, our
friend Greedy, and I were
driving to town. I must have dozed off. And falling asleep around these guys was
just begging to be pranked. Our number one rule was never to be the first to fall
asleep.

“Feel what?” I asked, confused.

“I was holding your nose for like a minute,” Greedy said from the backseat.

I made a face. “I should have known I couldn't get any sleep around y'all.”

“I bet you thought you were dying, huh?” Justin asked.

I just shook my head. “Y'all play too much. Yeah, I thought I was dying.”

Justin and Greedy started laughing even harder. I'd never told my two best friends
about my panic attacks, so I just tried laughing it off, even though I was still
shaking a little and could hardly catch my breath.

Calm down, Adrian
, I told myself. It was just a dream and these two knuckleheads
.
Just calm down.

“You'll be wide awake after you get a few shots in you,” Justin said, as he pulled
into the parking lot of the Corner Tavern, our local bar and hangout spot.

It was a warm Saturday night in August, and my two friends had decided to take me
out to celebrate the new job I started on Monday. I was the new eighth-grade English
teacher at Finley Academy, one of the most prestigious private schools in Georgia.

I'd been going out with these two just about every other weekend since I moved back
to my hometown after college.

“Are y'all gonna eat?” Greedy asked, as we all got out of the truck. “I'm thinking
about getting some wings.”

“You're always thinking about getting some wings, or fries, or a burger,” I said,
shaking my head. “We're supposed to be drinking tonight.”

“We can drink, too,” Greedy replied.

Greedy definitely lived up to his nickname. I always got annoyed being around him,
but he always found a way to make us laugh. He was like an annoying little brother
who somehow found his way into the cool kids' circle. He was always eating, always
breathing loud, always dressed sloppy,
always trying to talk to girls who were way
out of his league, and always cracking jokes. I looked over at what he was wearing
tonight. Baggy blue jeans with a long, black-and-white button-down Chaps shirt that
had to be XXL. Greedy was short and round, so all of his clothes were XXL or higher.

“Hey, Greedy, you love those Chaps shirts, don't you?” I asked him. “You know what
âChaps' stands for, right?”

Justin started laughing, because he knew what was coming.

“Could've had a Polo shirt,” I explained. I knew that would get him fired up.

“Oh. You got jokes, I see,” Greedy said, grinning. “I've got Polo shirts too, but
the ladies love me in the Chaps shirts, so y'all can hate all y'all want to.”

“You'll see when I go in here,” Greedy said. “Plus, I'd rather have on my Chaps shirt
than that small Baby Gap shirt you got on, Adrian.”

“How you got on a muscle shirt with no muscles?” Greedy continued. It didn't take
much to get Greedy started. We always cracked on each other. That's the one thing
I missed about him when I went off to college.

“I'm surprised Lea let you out of the house tonight,” Justin commented, as we walked
up to the security guard and showed him our IDs.

“I had to get outta that house,” I told him. “All she does is complain about moving
here. Why did we have to move to the country, why can't we live closer to Atlanta,
why do we have to live in this old house, why this and why that.”

“I told you, man, those Miami girls are a different breed,” Justin said, shaking
his head. “I had one like that about two years ago. She was from L.A. She was beautiful,
too. Tall like a model, long hair, nails done every day . . . .”

We entered the dimly lit bar, pool tables on the right and dance floor to the left,
and I listened to another of Justin's stories about one of his ladies. Ever since
I've known him, which has been since middle school, he always has dated stunning
young women. They have always had long dark
hair, flawless skin, and captivating
smiles. I could tell that those qualities were his criteria. Plus he could make any
woman feel like she was the only woman in the room who mattered. He's told me that's
his aim, anyway. I've seen him talk to the shyest girl in the room and make her feel
comfortable around him. I don't know if it was his curly hair, his carefree persona,
or the all-black F-150 he drove. Whatever it is that they like about him, he's had
it since middle school, and young women have flocked to him ever since.

Honestly, I didn't like him when we first met in middle school. I saw him as competition.
I was good at sports, but he was better. I was tall, but Justin was slightly taller.
My style was good, but his style was eye-catching. I would make a B on a test, and
he would get an A. There was always competition there. Well, maybe he didn't see
it as competition, but I did.

Now I felt like I had one up on him. My girlfriend Lea was a beautiful Latina from
South Florida, and I was finally getting into my career as a teacher. Justin still
lived in an apartment with a roommate, and I had a house. Well, it was my grandmother's
old house, but still, it was a house. So in my mind, this was a night of celebrationâfor
my having one up on Justin.

“You guys getting the party started early, I see,” the bartender, Stephanie, said,
as she laid three napkins down on the counter in front of us.

“Yep, celebrating my man's big day on Monday,” Justin explained, putting his arm
round my neck.

Stephanie poured our three shots and set them on the napkins. Justin handed her his
credit card and told her to keep the tab open.

“To Adrian,” Greedy started, as he grabbed his shot and held it up.
“Congrats on
being the first one in the group with a real job, and hopefully you won't throw up
like you did last weekend.”