Whispers of Fate: The Mistresses of Fate, Book Two 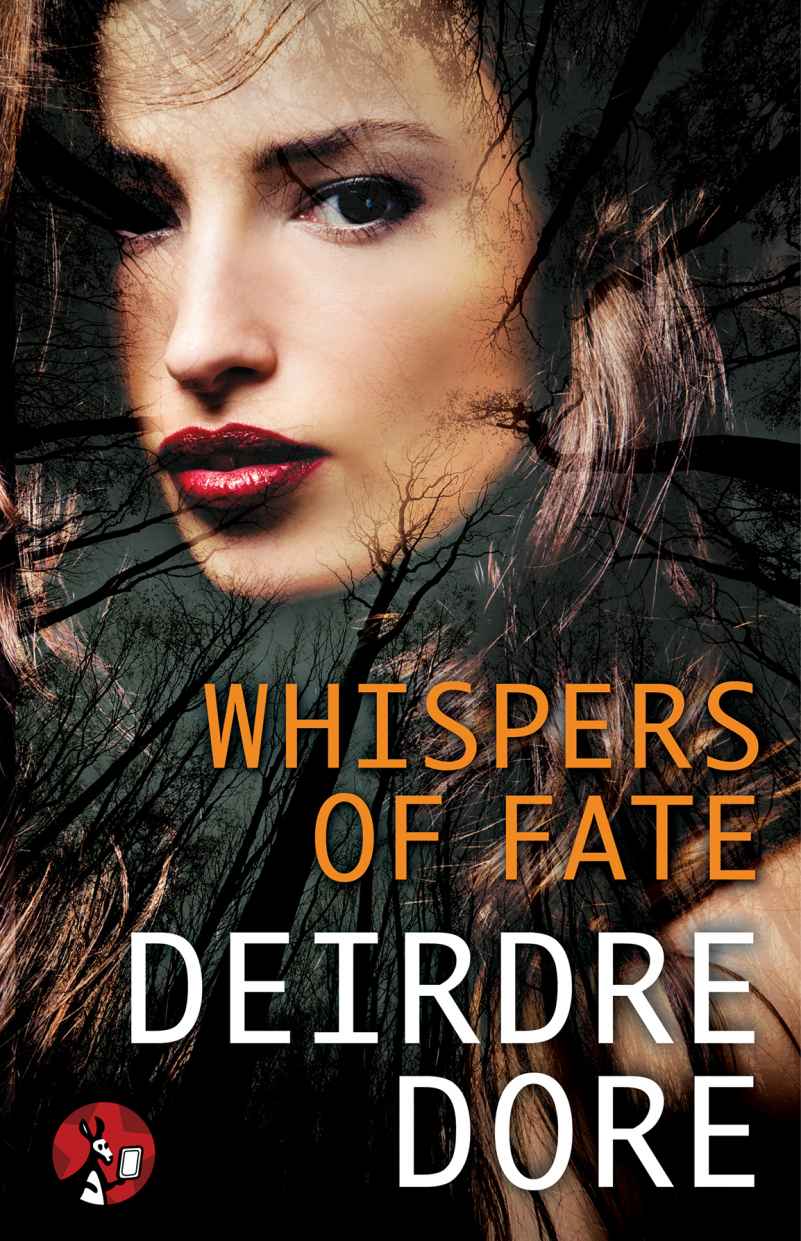 Thank you for downloading this Pocket Star Books eBook.

For whatsoever from one place doth fall,

Is with the tide unto an other brought:

For there is nothing lost, that may be found, if sought.

“TAVEY, WHERE’RE
we goin’?” Summer whined, trailing slightly behind Tavey as they scrambled their way through the woods. Buford, Tavey’s favorite beagle, bounded ahead, the white flag on the tip of his tail vibrating. Summer was not normally a whiner. Actually, Tavey couldn’t remember ever hearing that particular tone from her friend before. On any other occasion, she would have stopped to ask her about it, but it would be dark in a few short hours, and these woods were not friendly under the veil of shadows.

Dark or not, Tavey knew the woods well—most of them belonged to her family—and she surged ahead as determined as a hound on a scent, following whispering creeks, deer trails, and the paths made by her grandfather when he’d taken the dogs out hunting. When no paths presented themselves, she fought through the unruly vines and brambles, wriggling her slender body through. Summer followed more slowly, with less noise. Like Tavey, she’d been wandering in the woods since she was a child. Unlike Tavey, she couldn’t rely on her eyes, she had to use the sounds, smells, and feel of the woods around her. Blind since birth, she had never tolerated staying in her quiet, stale house and had been sneaking out since she was little.

“Come on. I want you to meet someone,” Tavey insisted.

Tavey grimaced at the apprehension in Summer’s voice. “It’ll be okay. Come on.”

Old Abraham lived on a couple of acres between Tavey’s property and the property that belonged to Summer’s family—a reclusive clan that had lived in the wooded mountains around their town for generations. The Haven clan believed themselves to be witches and generally kept to themselves, rarely interacting with outsiders.

Old Abraham wasn’t actually that old, but he looked old to Tavey, with gray hair and whiskers and yellow-gray skin. He acted old, too, shouting incomprehensible garble and falling down the rickety steps.

Tavey thought he’d just gone crazy, not to mention nasty—he’d called Summer a “damn witch” the last time they’d ventured onto his property. After that, Tavey had attempted to get her grandfather to run the old man off, but her grandfather had refused.

“He’s an old man who saw terrible things, Tavey, honey. Leave it be.” Her grandfather had shaken his head, touching a picture he kept on a little table next to his favorite club chair. Tavey knew the picture well. She’d studied it often because it was one of the few her grandfather had kept that showed her father, Charlie Collins. In the photo, her grandfather stood with a teenage Abraham and Tavey’s own father, who’d been a kid at the time, and a couple of the hound dogs. Abraham had been carrying a rifle in the picture, while Tavey’s father looked up at him with a scowl on his small face.

“Boy was a good shot, though, even then. Best you stay outta his way.”

Tavey had scowled—she didn’t care to feel in the wrong—but she had obeyed her grandfather as always.

Abraham’s sister had recently moved back to Fate with her husband and son. Tavey had met them yesterday, when her grandmother had taken her to welcome the new family back to town. They had moved into a small house in the less affluent part of town, near the railroad tracks, but Abraham’s sister had mentioned that her son would be staying with his uncle Abraham for a few days.

Thinking about the boy she’d met the previous day prompted Tavey to walk a little faster.

“There’s someone you have to meet,” she added by way of encouragement, but refused to say any more. She wanted Summer’s reaction to be untainted.

Normally, their other two friends, Chris and Raquel, would have come with them on this adventure, but they had gone with Raquel’s grandmother into town, and Tavey hadn’t wanted to wait.

She reached back and tugged Summer along faster, knowing she had to get back home before her grandmother worried about them. Summer’s mom had died the year before, and Jane, Summer’s older sister and guardian, probably wouldn’t even notice that Summer was gone; she’d been even more distracted than usual since she’d married Mark Arrowdale, a friend of Chris’s father.

“Why?” Summer’s voice bounced with curiosity, coming only a little faster as Tavey led her over obstacles.

Summer tugged her hand free and stopped. Tavey turned to look at her, taking in the sight of her slight, delicate-boned friend: the faraway blue eyes, the halo of blond hair that floated in wisps around her face. Framed by the woods, dim in the fading light, she looked like a mythical creature.

Tavey didn’t believe in magic or witches or love spells—her grandmother didn’t even like hearing about such things—but after knowing Summer for so long, there was no denying that her friend was . . . different. Summer knew when people were lying—she said it was because their voices changed, but still. She was always the first to know when someone was in love, or who was having an affair or stealing from someone else. She’d been the first to tell Chris that her father was in trouble and Tavey that her grandfather was sick. The only people who seemed to puzzle Summer were her own family—which figured.

Now Tavey wanted to confirm something about the boy she’d met, and while she didn’t believe in magic, she did believe in Summer.

“Come on.” Tavey reached out and took Summer’s hand again. “You’ll like him.”

It took about an hour to cover the mile of woods that led to Old Abraham’s house. When they broke the tree line, Buford, excited by the smell of people, ran back to Tavey, his tongue hanging out of his mouth in a doggie grin. The dusky evening sun coated the wrinkled hill that led to the old man’s house in golden light. Wildflowers bloomed in nooks and crannies, dancing in the breezes that stirred the mountain. Tavey grinned at how pretty it was, wishing Summer could see it.

“To me,” she ordered, and Buford ran to her side. She didn’t think the old man would shoot her dog, but it was better to be safe.

Tavey was careful to approach boldly rather than sneaking up, pulling Summer along behind. Together they hiked up the first part of the hill to the gravel drive—a pale snake marking the boundary between the Collinses’ land and that of the witch families.

They’d gotten within a few hundred feet of the old wooden front door when a ten-year-old boy, towheaded and wearing only a pair of faded jeans, opened it abruptly. His feet were bare—brown-dyed with dirt—and a fist-size bruise marked his chest.

“Who’re you?” he demanded of Summer, ignoring Tavey. He stood with fists clenched and chin angled.

Tavey lifted her own chin, disdaining his arrogance, even while she itched to take him home and have Atohi bathe him like he would one of the hounds that had tangled with a skunk—in a metal washbasin with a scrub brush and the hose.

“She’s Old Abraham’s neighbor, and you met me yesterday.”

“His name’s not Old Abraham,” the boy replied, crossing his arms over his chest. An unruly cowlick escaped the matted confines of his hair and waved on the top of his head. Tavey narrowed her eyes at the offensive lock and the lesson in manners.

“Fine. This is Summer Haven.”

“How do you do?” Summer said to the air just to the right of the boy’s face.

His head tilted as he tried to meet her gaze. “Can’t you see?”

“What’s that s’posed to mean?” he challenged.

“Nothing,” she replied, but Tavey caught the underlying current of wariness.

“Well, that’s all we wanted, to introduce Summer.” Tavey waited for his reply, but her patience ran out after a few seconds of obstinate silence. “What is your name, please? You didn’t tell us at the house.”

His crossed arms tightened—a pillar of stubbornness, but a gravelly voice from inside the house called out, prompting him. “Answer ’em, son, so they’ll go away.”

The boy acquiesced with ill grace, the words pulled from a clenched jaw. “Tyler. Tyler Downs.”

Tavey presented her hand for him to shake, gaze firm and challenging. “It’s nice to meet you, Tyler Downs.”

He glanced down at his dirty hand, then shrugged. “Yeah, sure.”

When his dirty, rough-palmed hand engulfed hers, she felt a small tickle on her wrist, like someone had just brushed her skin with a feather. Goose bumps rose on her arms. From behind her, she heard Summer’s breath catch. Tavey didn’t know what Summer “saw” when Tyler Downs touched her hand for the first time, but she suspected, and wasn’t surprised when Summer leaned in close and whispered in her ear, “You already knew. He’s your soul mate.”