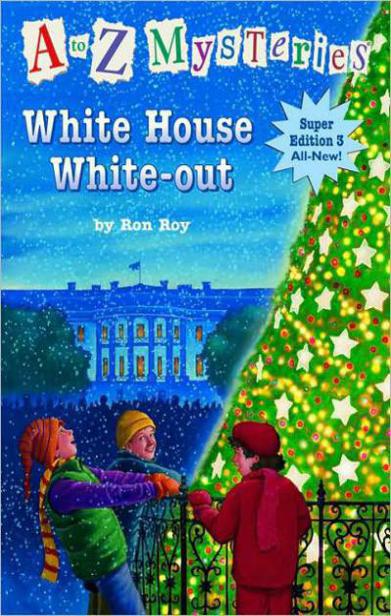 Dink, Josh, and Ruth Rose
aren’t the only kid detectives!

Can you find the hidden message inside this book?

There are 26 illustrations in this book, not counting the one on the title page, the map at the beginning, or the picture of the White House that repeats at the start of many of the chapters. In each of the 26 illustrations, there’s a hidden letter. If you can find all the letters, you will spell out a secret message!

If you’re stumped, the answer is on the bottom.

This book is dedicated to my parents, who gave me my first book.
—R.R.

Josh stuck out his tongue into the cold December air.

“What are you doing?” Ruth Rose asked him.

Dink laughed at his friend. “You’ll freeze your tongue off,” he said. Dink’s full name was Donald David Duncan, but his friends called him Dink.

Josh looked at his two best friends through the falling snow. “Really?”

Ruth Rose nodded. She liked to dress all in one color, a different color each
day Today it was red, from her boots to her gloves to her knitted cap.

The kids were in Washington, D.C. It was the week before Christmas, and they had taken the train from Connecticut with Dink’s father. While the kids were sightseeing, he would be doing research in the Library of Congress. Dink, Josh, and Ruth Rose had visited the National Zoo first and had just left the Washington Monument.

“How much farther to the White House?” Josh asked as they trudged through the snow. It was six inches deep, covering the sidewalks, lawns, and most of their boots.

Ruth Rose pulled out her guide to Washington, D.C. She opened to a map of the city. “We’re right here, on Seventeenth Street,” she said. They were headed toward their hotel on K Street.

“Here’s the White House,” Dink said. He put a gloved finger on the map. “Only a few more blocks.”

“And there’s our hotel,” Ruth Rose said, moving her finger on the map. “It’s only a little way past the White House.”

“When we get back, I’m having steak for supper,” Josh announced. “With a mountain of mashed potatoes and a giant piece of chocolate cake for dessert.”

“Look, there’s the National Christmas Tree!” Ruth Rose said. She pointed to the right. Through the falling snow, they could make out the tall tree. Its thousands of Christmas lights glowed like jewels through the dim, snowy afternoon.

“Wow!” Josh said. “That must be the tallest Christmas tree in the world! Let’s go see it.”

They turned right and walked about two hundred yards to the base of the tree. A few tourists were there taking pictures. A couple of little kids were trying to build a snowman.

Josh and Ruth Rose turned around and followed Dink’s gaze. Only a few hundred yards away stood the White House. Even through falling snow, the building was easy to see. The front was surrounded by a curve of black fence. Lights shone through dozens of windows.

“I heard Lincoln’s ghost walks around inside,” Josh said.

“I wish we had time for a tour,” Dink said. He looked at his watch. “It’s four-thirty and I told Dad we’d be at the hotel by five.”

Ruth Rose consulted her book again. “The next tour is tomorrow at noon,” she informed the boys.

Ruth Rose opened her guidebook again. She read a paragraph:

“Wow, it must be awesome to live in the White House,” Josh said. He put his face up against the fence. “Think of all
the rooms you could play hide-and-seek in!”

“How many rooms are there?” Dink asked Ruth Rose.

Ruth Rose looked in her book. “One hundred and thirty-two,” she said. “But most of them aren’t open to the public.”

Just then a dog came bounding through the snow inside the fence. The dog was tall and gray, with long, skinny legs. It was wearing a red sweater with cutouts for the legs and tail.

A boy and girl about the same age as Dink raced after it, both covered with snow. They saw Dink, Josh, and Ruth Rose looking through the fence.

Their dog trotted over and stuck its snout between the rails.

“Is your dog friendly?” Dink asked the two kids.

“Sure,” the girl said. “Natasha is a greyhound, and she loves everyone!”

Dink noticed red hair sticking out from under the girl’s hat.

Dink, Josh, and Ruth Rose took off their gloves. They put their hands through the fence bars and patted the dog’s sleek head.

Half Share by Nathan Lowell
Life Sentence by Kim Paffenroth
A Peach of a Pair by Kim Boykin
The Bride Gift by Sarah Hegger
Reckoning (Book 5) by Megg Jensen
Unknown Pleasures: Inside Joy Division by Peter Hook
The Prodigal Troll by Charles Coleman Finlay
Culpepper's Cannon by Gary Paulsen
TH02 - The Priest of Evil by Matti Joensuu
Black May by Michael Gannon