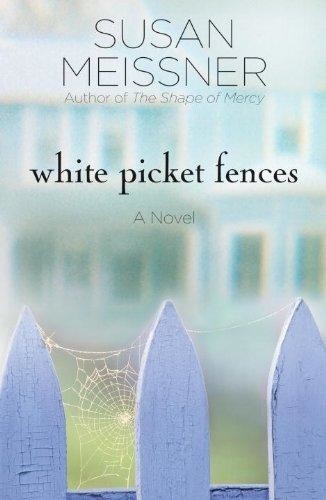 “I loved looking into the heart of this family whose life looks perfect only from the outside. Meissner’s characters are so real, so haunted by the past, and so in denial for reasons of self-defense that you will be swept away till the final page. You’ll find it hard not to wonder, as one of the elderly characters did, if remembering is a choice that takes courage.”

“To step into a Susan Meissner book is to be blessed by a craftsman’s tender touch. In Susan’s hands, we move carefully into compassion, entering the ordinary lives of people who could be our neighbors, ourselves, each doing what we can to staunch the pain of memory. This book opens a gate in the white picket fences of our lives, helping transform memory and secrets so we are no longer held hostage by the past. Beautifully written by a keen observer of the human condition,
White Picket Fences
will keep you reading into the night and make you sigh with satisfaction at the end.”

“This compelling story with its wonderful cast of characters offers hope to all of us who live less-than-perfect lives behind our white picket fences. Susan Meissner skillfully weaves together parallel storylines to show how healing can come when we risk sharing our secret pain with others.”

—L
YNN
A
USTIN
, author of
Until We Reach Home

“Susan Meissner just keeps getting better and better. This novel is a deftly woven portrayal of family and friendships, of secrets and sacrifices, one that tiptoes beyond the white picket fence to look at what happens when people stop talking to one another.”

“Poetic prose and a ‘can’t put it down’ plot make
White Picket Fences
a great read. It’s a thought-provoking look into a dysfunctional family that thinks it’s functional and how an outsider can serve as a means of grace. Caution: be ready to lose a few hours of sleep!”

—E
LIZABETH
M
USSER
, missionary and author
of
The Swan House, The Dwelling Place, Searching for
Eternity,
and
Words Unspoken

“White Picket-Fences
is a beautiful yet haunting portrayal of what lies beneath a seemingly perfect suburban family. Susan Meissner’s powerful storytelling woos the reader into the lives of flawed, needy characters, making us ache with them, rejoice with them. Meissner deftly weaves old and new, producing a seamless, satisfying, and enduring story.”

“Writing as incandescent as pure flame. Susan Meissner delivers again with a family story that wraps you up and stays with you long after the last page.”

of Deceived
and
Try Fear

It is necessity and not pleasure
that compels us.

T
he chilled air inside the Tucson funeral chapel suppressed the punishing heat outside. Amanda shivered as she took a seat on the cool metal chair. She leaned over and whispered to her husband in the chair next to her. “A sweater in Arizona in September?”

He nodded casually, apparently unfazed by the abrupt temperature change from scorching to polar. Neil had worn a suit, though she told him she didn’t think he had to, and she envied his long sleeves. He quietly cleared his throat, opened the program he’d been handed when they walked in, and began to read the obituary of the woman whose casket sat several feet away—the woman neither of them had ever met.

A generous waft of newly refrigerated air spilled from the vent above her head, and Amanda instinctively turned to her niece on her other side. The teenager’s arms were bare under a flamingo-hued halter dress. Amanda wondered if the foster mother had given Tally any advice at all on what she might want to wear to her grandmother’s funeral. Amanda again turned to her husband.

“I think we should’ve come yesterday.” Her voice was barely above a whisper.

Neil looked up from the program. “It wouldn’t have changed
anything,” he replied gently. “Besides, we got here as quick as we could. It’s not your fault you didn’t know she was here. Your brother should’ve told you.”

Neil reached for her hand and gave it a squeeze. Amanda looked down and noticed a thin line of wood stain under one of his fingernails, evidence that he had cleaned up from his latest woodworking project in a hurry. Neil turned back to the program, and Amanda looked over at her niece.

“You doing okay?” She hesitated, then placed an arm around Tally’s shoulders.

The girl flinched and glanced at Amanda’s arm before turning back to face the casket. The sixteen-year-old shrugged. “I didn’t really know my grandma.” The words were laced with casual regret, as if she knew people were supposed to know their grandparents, but what could she do about that now? Amanda intuitively pulled Tally closer. The girl stiffened at first and then relaxed, reminding Amanda that Tally barely knew her either.

Amanda hadn’t seen her niece in nearly a decade. A handful of phone calls over the last few years, including one from a Texas jail and one from a château in Switzerland, had confirmed that Bart was still alive and that he still had Tally. Bart tended to contact her only in desperate times. And most of the time he didn’t recognize his own desperation.

She had always felt like the older sister when it came to Bart, the one who watched out for him, the one who tried to keep him out of trouble, the one their parents expected more from. It had always amazed her that Bart was just fine with that arrangement. She had been in junior high when he left home at seventeen,
and he’d come home only twice in the years before she graduated from high school. Bart missed their parents’ quiet divorce. Missed their mother’s remarriage to an Australian man who had no intention of living anywhere but Melbourne. Missed her wedding to Neil and the births of her two children. Missed their father’s last agonizing days of pancreatic cancer. In thirty years Bart had missed just about everything, including all opportunities for his family to get to know Tally.

The opening notes of the organist’s ballpark rendition of “Shall We Gather at the River?” startled her, and she barely heard the buzz of her husband’s vibrating cell phone. Neil pulled the phone out of his suit pocket. “It’s a text from Delcey,” he said. “She wants to know if she can sleep over at Mallory’s house tonight. They want to go to the beach.”

Amanda crinkled an eyebrow at the thought of her daughter not being home when they flew back to San Diego. “Tonight?”

Neil looked at her. “Maybe it’s a good idea.”

“No. Not tonight, Neil. She can go to the beach but she should be home tonight. Don’t you think?”

“Which beach? How’s she getting there?”

“Encinitas. Chase said he’d take her,” Neil said, looking at the tiny screen on his phone.