Read Who Invited the Ghost to Dinner: A Ghost Writer Mystery Online

Who Invited the Ghost to Dinner: A Ghost Writer Mystery 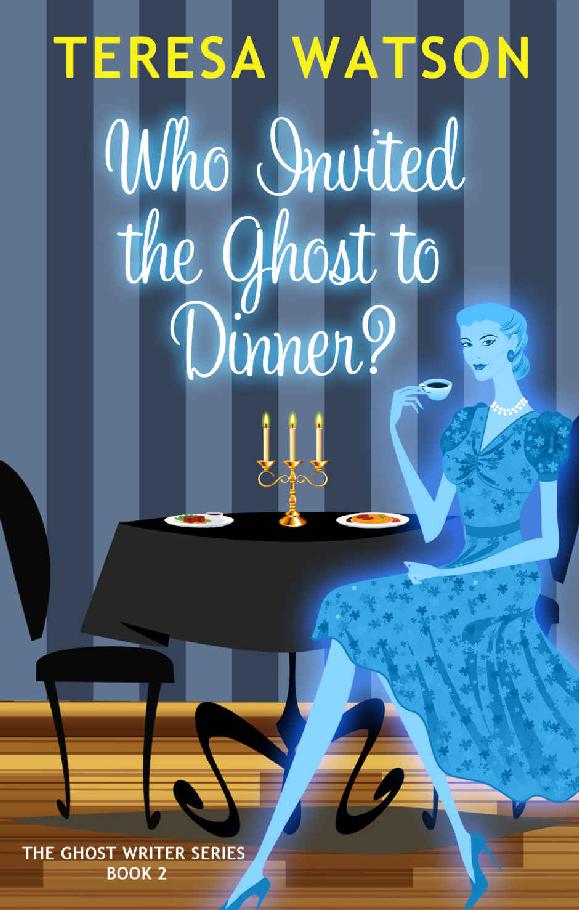 Who Invited the Ghost to Dinner?

Who Invited the Ghost to Dinner: A Ghostwriter Mystery

This is a work of fiction. The names, characters, places, and incidents are products of the writer’s imagination or have been used fictitiously and are not to be construed as real. Any resemblance to persons, living or dead, actual events, locales or organizations is entirely coincidental, or done with the blessings of the persons involved.

All rights reserved. No parts of this book may be used or reproduced in any manner whatsoever without written permission of the author.

This ebook is licensed for your personal enjoyment only. This ebook may not be resold or given away to other people If you would like to share this book with another person, please purchase an additional copy for each person you share it with. Thank you for respecting the author’s work.

When I wrote the first Ghostwriter story, I used my family members as characters. Grandma Alma was named for my grandmother, and Jim Shaw for my father. My grandmother always had a smile on her face, loved to laugh, but mostly, she loved to give her son-in-law a hard time. Inviting Grandma over when we grilled dinner usually meant a discussion about how she wanted her food cooked. “I like mine well, well done, Jim,” she said. One time, Dad got so exasperated, he just handed her a piece of charcoal and said, “Enjoy!” She called him, “Old what’s his name, that son-in-law of mine”, and he lovingly called her “the old battleaxe” or “Gravel Gertie.”

Grandma was 96 when she passed away last January. She outlived her brothers and sister, her husband, brother-in-law, and one sister-in-law. She was the only grandmother that I had from the age of seven. I was so blessed to have had her in my life for almost forty years. I cherish the memories, and miss her deeply. I love you, Gravel Gertie.

Dad...there are so many things that I could say, and it would be longer than this book. One of my biggest supporters, my loudest cheerleader, the rock of our family. Seventy years on this earth was not long enough. There is not a day that goes by that I don’t miss him. For all the love, the lessons taught, just for being there, thank you, Dad. I love you.

Grandma was just as stubborn and feisty as Grandma Alma in the story, although she wasn’t a poker player, and she never remarried after Grandpa Charlie died. I figured if she was going to live on in my stories, she was going to have as much fun as possible.

Jim in the story is just like Dad. He really did serve as a chaplain’s assistant in Vietnam, and he really was a minister. I made the character as much like Dad as I could. And he really did offer to cut my hair with a weed eater...often.

God bless both of you. Until we meet again...I love you.

First of all, Waxahachie, Texas is a real city (I should know, I live here!). There really is a Lake Waxahachie, too. The people and places in the story are pure fiction, although three or four people are actually based on people I know, and have been given their permission, blessing, and full creative license to use them in the story. As, I said the last time, if I didn’t do them justice, then I deeply apologize, and shall endeavor to do better in the future.

The community theatre in the story really exists, although my description may not be accurate or do the building justice. It was built in the early 1900s, and is on the Texas Historical Registry. It really is shaped like a hexagon, and the box office is a separate building; it is a smaller version of the theatre itself.

There really is a placed called The Twisted Root Burger Co. There are several locations in the Dallas/Fort Worth area, and it is a FANTASTIC place to eat! Each time we go there is a unique experience. A big thank you to Jason for allowing me to use the restaurant in the story (he made me promise not to turn anyone into hamburger meat).

Now to the thank you’s: My usual crew: my mother, Charlotte; Kristi Spinks and Stacy Jeziorowski, who patiently read this story, and all unanimously agreed the original ending stunk, and made me rewrite it. Stacy and Kristi painstakingly did a final read through (as did I!) to make sure that all the changes we needed to make were done. You guys ROCK! I could never do any of these books without the three of you encouraging me, brainstorming with me, and telling me your own ideas for these awesome characters we have created.

Stephanie Nelson of Once Upon a Time Covers for the beautiful cover for this book and for the first Ghostwriter book,
Who Killed the Ghost in the Library?
Thank you so much!

My head assistant, James, my son: I think I had the most fun working with you on this book. He and I spent one morning trying to figure out the murder of one of the characters. It took us about an hour and a half of sending messages back and forth. When we were done, your response was the absolute best: “Did we seriously just plot out a murder!?!?!?!?!?!” My reply was, “Welcome to my world, son! This is what I do for a living! Exciting, isn’t it?” I don’t think Mother and I would have made it through the last year without your love and strength. Thank you, James. You have turned into a wonderful young man. Papa would be very proud of you. Love you!

To my loving hubby: You have been the rock of Gibralter this past year. Thank you so much for all your love and patience, the endless meals you have brought home while I have been frantically working on this story, and for just being there when I needed to have a good cry (or a backrub). Love you!

Death of a Cantankerous Old Coot

Death Goes to the Dogs

Who Killed the Ghost in the Library?

Who Invited the Ghost to Dinner?

(but Charlotte Runs It)

Regina Lopez – a barista at the coffeehouse

Simon Edwards – actor; plays Charles, a writer in the play

“M
ike, you cannot drag an elderly man into your office and threaten to throw him in jail just because he won’t tell you where your grandfather is,” I said.

“Am I the only one around here who is remaining calm about this situation?”

“The disappearance of two old people is not what I would call a situation, Cam.”

“What would you call it?”

I rolled my eyes, shook my head and sighed. My mother, Charlotte Shaw, and Mike were freaking out because Mike’s grandfather, Walt Penhall, and my grandmother, Alma Dreyer, had disappeared two days ago. I was pretty sure there was nothing nefarious about it, but Mike and Mother weren’t convinced. “Just how long are you planning on leaving Pete in the interview room?”

I shook my head and stood up. “This nonsense ends right now,” I told him as I left his office. I went down the hall to the interview room and opened the door. Pete Wyatt was sitting in a gray chair at a metallic gray table, but he wasn’t alone. A young woman with light brown hair sat across from him, laughing at something he had said.

Pete looked over at me as I entered the room. “Cam, what are you doing here?”

“Orchestrating a jail break,” I replied. “Are you ready to get out of here?”

“You bet!” he grinned. “It’s meatloaf day at the home. The cook puts slices of green bell pepper in it, and it tastes wonderful. This lovely young lady is my granddaughter, Margaret Jewell Davidson, but most people just call her M.J. She was coming to see me when Mike hauled me in. How did you know I was here?”

We shook hands. “It’s a pleasure to meet you, M.J. I’m Cam Shaw,” I said. “Rose saw Mike put you in his squad car this morning. She called my dad at the coffeehouse, and he told me after the early rush was over.”

“Ah, bless Rose’s heart,” Pete said. “I thought that was her I saw walking through the garden. Come on, M.J., let’s go.”

M.J. grabbed her purse. “Did the chief say it was all right to leave? I don’t want Gramps to get into any more trouble.”

“You’re assuming I did something to get into trouble in the first place,” Pete said, looking offended.

We made our way down the hall to the front door; Mike was standing in front of it. “Where do you think you’re going?” Mike asked Pete.

“I’m not done talking to you yet.”

“Pete, you and M.J. head out to my car. I’ll be right there,” I said as I grabbed Mike by the arm, dragging him out of the way so they could make a break for it. “Listen, I will talk to Pete myself, in a non-hostile environment. He’ll open up to me.”

“He better,” Mike growled. “I’m getting sick and tired of answering your mother’s calls every hour.” Just then, his cell phone rang. He pulled it out. “Speak of the devil…”

“Good luck with that,” I told him as I ran out the door after Pete.

I just waved and kept going. “Did you drive over here, M.J.?” I asked.

I unlocked the car doors of my Olds 442, my pride and joy, and we all piled in. As we headed for the home, I glanced sideways at Pete. “Okay, we’re away from Mike. If I ask you, will you please tell me where Grandma Alma and Walt are?”

It’s a good thing we came to a stop sign, because I turned and stared at him. “I’m sorry, did you say Vegas? As in Las Vegas?”

“Do you know of any other Vegas?” Pete chuckled.

The truck behind me honked, and I drove through the intersection. “What in the world are they doing there?”

“What do you
think
they are doing there?” he said mischievously.

“I agree,” I said. “Why didn’t they tell anyone where they were going?”

“Because all of you treat them like they are frail flowers that have to be kept under glass. They may be older, but they’re not dead. There is life beyond the four walls of that building,” he replied, pointing at the nursing home as I parked in front of it. “Let them live, Cam. Tomorrow isn’t a sure thing, and none of us want to spend it sitting on our butts, playing dominoes or watching TV all day.”

“I guess none of us stopped to consider that,” I admitted.

“That’s the problem with the younger generations,” Pete said. “You’re all so busy scheduling your lives on your little phones, you don’t take time to stop and enjoy life. There’s a whole world out there, waiting for you to discover it. Just remember to look around you.”

I nodded as they got out of the car. “Did they tell you when they were going to be back?”

“They didn’t go to Vegas to play blackjack.”

“I’m sure there are plenty of other games they can play,” I laughed, “although I’m sure Grandma Alma would win at any game she played.”

“But there are
other
things to do in Vegas.”

“Well, yeah, there are plenty of shows they can go to.”

Pete sighed and shook his head.