Read Why Do Men Have Nipples? Online

Why Do Men Have Nipples? 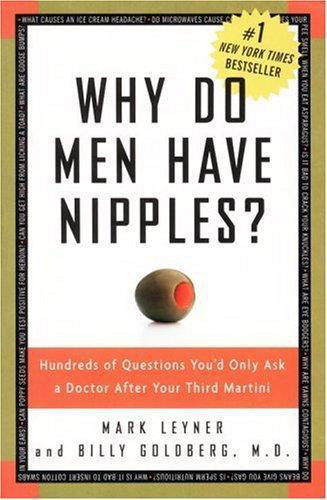 WHY DO MEN
HAVE NIPPLES?

Published in the United States by Three Rivers Press, an imprint of the Crown Publishing Group, a division of Random House, Inc., New York.

Why do men have nipples? : hundreds of questions you’d only ask a doctor after your third martini / Mark Leyner and Billy Goldberg.

This book is dedicated to all those special doctors who inspired us:

What you are about to read is mostly true, as far as we know. But this book in no way should substitute for a visit to your doctor. Remember, doctors are trained professionals. Also, do not attempt to answer these questions yourself unless you are a mother. Mother always knows best.

When you’re at a cocktail party, someone inevitably asks you what you do for a living. If you say that you are a doctor, the barrage begins.

Soon you’re looking at someone’s mole, consulting someone else on his brother-in-law’s painful flatulence, racking your brain to explain the etiology of your hostess’s episodic vertigo, and that’s just the beginning. You would think that after twelve years of rigorous training and sleepless nights, doctors would have all the answers. But no! Not so. The sad fact is that one of the medical establishment’s great shortcomings is its failure to teach what the general public really wants to know about medicine.

This book is an attempt to rectify this unfortunate situation. Inside these pages we will begin to answer some of the medical questions that real people ask. Pressing questions such as “Why does my pee smell when I eat asparagus?” “Is it true when they say ‘beer before liquor, never sicker; liquor before beer, never fear?’” “Is sperm fattening?” “What causes an ice cream headache?”

This is not a self-help book or a medical manual. It’s a glimpse at some of the strange things that people want to know from their doctors, but are too embarrassed to bring up in the ER or during an office visit. They only seem to find the courage to ask these questions after their third martini.

That’s when the party begins.

Billy Goldberg:
How did Mark Leyner and I come to know each other and pursue this heroic project,
Why Do Men Have Nipples?

This is a long dark tale, a quixotic quest. A journey of two friends attempting to accomplish a nearly impossible task. We are an unlikely pair. I am a New York City emergency room doctor and Mark is a successful novelist and screenwriter. Not exactly the perfect literary match, but, our paths crossed and the rest is history. . . .

It began one frigid, blustery night in a busy New York City emergency room. I had been thinking about doing this book for many years. I had compiled questions and pondered answers but was never able to fully steel myself for such a perilous exploration and actually write any of them down. I had just been hired as a medical adviser on the ABC medical drama
Wonderland
. This short-lived show was a realistic drama based on the daily lives in a psychiatric emergency room and a prison psychiatric ward. The show added an ER character and I was hired to integrate the medical ER reality into the show. It was my job to bring the writers into our world of chaos. Most movie and TV writers knew nothing of real hospital medicine and were taken aback by the controlled disorder and gore of the emergency department and my world of science and human suffering.

I had been told by one of the producers that my visitor for that shift was going to be Mark Leyner. I consider myself to be well read, but I had never heard of this Dionysian postmodern superhero (Mark’s description). A quick Google search revealed that he had published many novels, one of which was called
My Cousin, My Gastroenterologist
. I also found that he had written a television pilot for MTV entitled “Iggy Vile, M.D.” I was confused and had no idea what to expect, but I was intrigued.

That night, I was at the bedside of a patient, assisting a resident in the placement of a nasogastric tube, when the nurse told me that there was someone to see me. I took off my gloves, pulled back the curtain, and there was Leyner. Nothing in my medical career could have prepared me for the character I was about to meet. He had the heavily muscled torso of a Bulgarian weight lifter and the weepy histrionic temperament of a teenage girl. He was babbling to no one in particular as he scarfed down fistfuls of Skittles from a paper bag. It soon became apparent to me that Leyner wasn’t like the other TV writers I had met. He was a medical autodidact with an astonishingly bizarre and encyclopedic store of arcane medical knowledge. Within five minutes Leyner had regaled me with the precise pharmacokinetics of jimsonweed, a Fijian folk remedy for cannibal indigestion, the history of turf toe and crotch rot, and the inexplicable prevalence of supernumerary testicles in Wilkes Barre, Pennsylvania.

I knew it was going to be an interesting night.

As I made rounds with Leyner at my side, the first new patient to arrive was an “EDP.” This is the term that we use for an emotionally disturbed patient. He was wildly agitated and a dozen burly New York City EMS personnel and cops were barely able to keep him restrained on a stretcher. Mark and I hurried over to see him wide-eyed and ranting psychotically. He was screaming in Spanish and English, “I am Superman, motherfucker. Get me Jimmy Olsen. I am faster than a speeding bullet, more powerful than a locomotive.” I stepped up to the bed with the goal of getting an IV in and calming Superman down. He screamed again, “I am Superman, goddammit, your medications won’t work on me.” Leyner, who had been coolly observing the scene with clinical detachment, popped some Skittles in his mouth and made a stunningly unorthodox suggestion. “Give him kryptonite.” I know that as you tell a story many times it begins to get embellished, but I remember that these words and these words alone calmed the patient enough so that we could get the drip going and get him under control.

The night continued to be a strange mix of the bizarre and touching, and I left my shift feeling that this strange little man would somehow have a profound effect on my life.

Mark Leyner:
Even though I come from a long line of lawyers—and, in this society, lawyers and doctors are like warring sects in the Balkans—I’d always had a deep fascination with medical matters. Whereas most boys would subscribe to
Sports Illustrated
and
Boy’s Life,
I waited eagerly for the mailman to deliver
Annals of Gastrointestinal Surgery
and
Journal of the American Society of Investigative Pathology
. Most kids begged their parents for trips to Disney World. I annually implored mine to take me to the Mütter Museum in Philadelphia, which houses this country’s most glorious collection of medical oddities, including conjoined fetal quintuplets in formaldehyde and the preserved remains of the world’s largest colon. I did seriously consider becoming a doctor, until I went to Brandeis, that is. There I saw firsthand the future doctors of America. Bunch of whining, ass-kissing, unscrupulous, morbidly neurotic premed students. My fascination didn’t die though—in fact it became my secret inner life resulting in my first book of fiction being entitled
My Cousin, My Gastroenterologist
.

So I guess that my obsessive inclusion of graphic medical detail in all my subsequent books and a script I wrote for MTV entitled “Iggy Vile, M.D.”—featuring an ale-swilling football hooligan punk of a surgeon—is what prompted Peter Berg to invite me to write for a television hospital drama he’d created called
Wonderland
. I’d just begun working on my first
Wonderland
script, when Peter called me one night raving about this guy who worked in the ER—this guy Billy Goldberg—and I took it all with a grain of salt, expecting him to be a grown-up version of the Brandeis pre-meds, but I agreed to meet him anyway. It turned out to be a glorious night. Billy was not the simultaneously insipid and officious physician I expected at all. The night was a revelation. What I saw that evening was amazing—a Chinese chef hit in his head with a meat cleaver, a Russian guy who came in with his ear in a bag of ice after his Rottweiler bit it off, and of course Superman. But it wasn’t just the voyeurism. There was an immediate genuine connection between Billy and me, and there was something deeply compelling about the way he responded to the human needs of the people he treated in that chaotic and bizarre environment.

Billy:
Several days later I showed up at the
Wonderland
production offices and I apparently had attained a newfound level of credibility. Leyner had told the tales of our evening and I am sure he had added a little bit of writer’s embellishment. I was introduced to some of the other writers whom I had not met and sat briefly in their lavishly decorated and organized offices to answer the mundane medical questions from their respective scripts. My next stop was Leyner, and when I entered his office, it was like entering a tomb. The room was almost devoid of decoration and furniture, and it had a monastic feel. Leyner was lying on his stomach typing rapidly on the keyboard of his laptop. He looked up and without a greeting said, “Tell me everything you know about Kluver-Bucy syndrome!” We proceeded to discuss the clinical findings of this rare neurological disorder that causes individuals to put objects in their mouths and engage in inappropriate sexual behavior—obviously, a disease that was irresistibly attractive to the likes of Leyner.

Although critically acclaimed,
Wonderland
was canceled after three episodes. Leyner and I continued our strong friendship. We would talk about each other’s work, and I particularly enjoyed reading his scripts and adding my meager suggestions. We decided a collaboration was in order and pitched several TV pilot ideas together. Working with Leyner brought me back to my long-standing idea for a book of cocktail party medicine questions. Leyner greeted my invitation to work on this book enthusiastically.

Cult by Warren Adler
Zeus (The God Chronicles) by Solomon, Kamery
Borrowed Time by Jack Campbell
Angel Touch by Mike Ripley
Emily Carr by Lewis Desoto
Lost Christmas by David Logan
Billy Angel by Sam Hay
The Mushroom at the End of the World: On the Possibility of Life in Capitalist Ruins by Anna Lowenhaupt Tsing
Some Sort of Happy (Skylar and Sebastian): A Happy Crazy Love Novel by Melanie Harlow
If I Had You (Christmas In Harper Falls) by Mary J. Williams