Read Why the Right Went Wrong: ConservatismFrom Goldwater to the Tea Party and Beyond Online

Why the Right Went Wrong: ConservatismFrom Goldwater to the Tea Party and Beyond 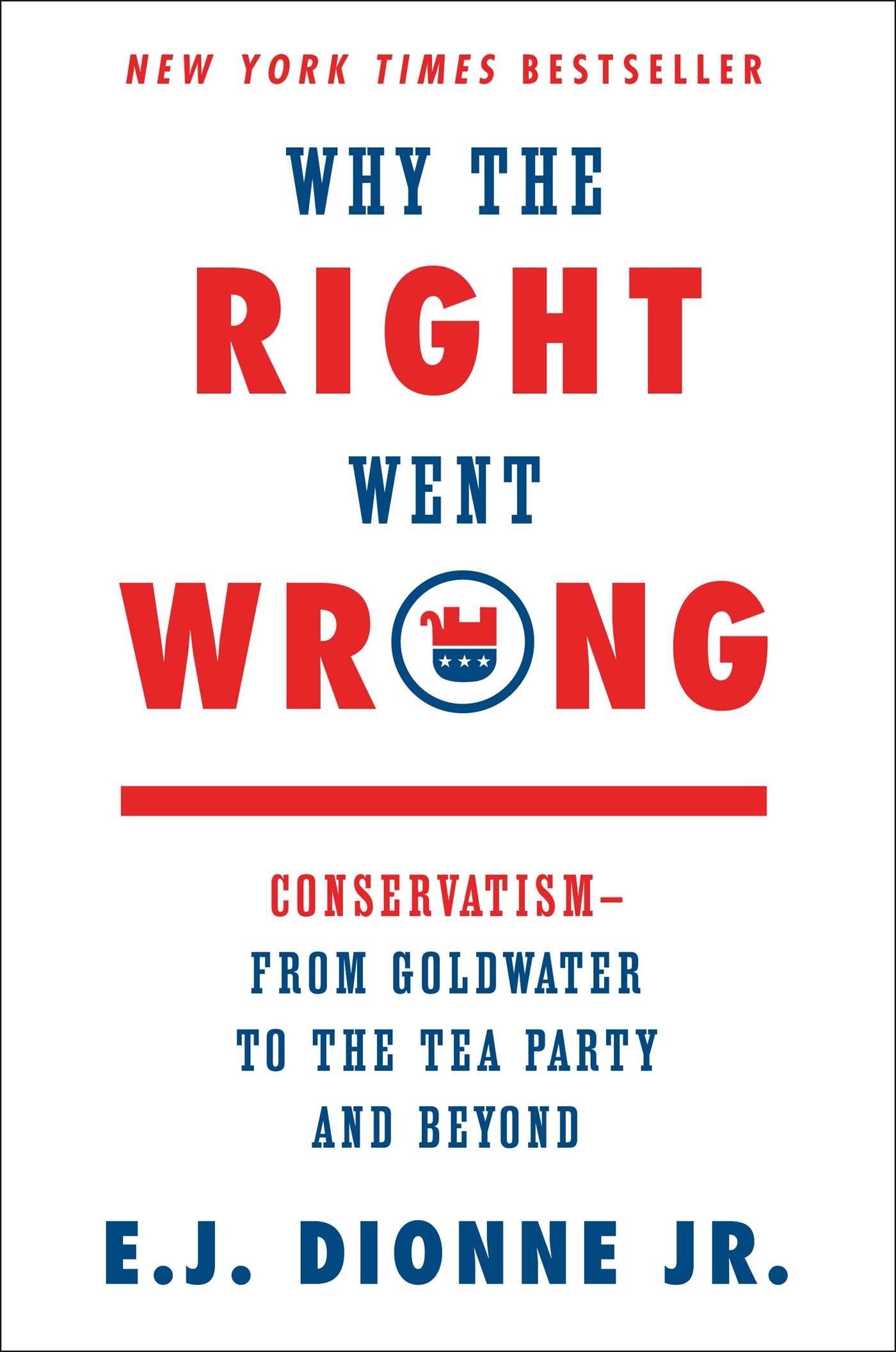 INTRODUCTION: WHAT HAPPENED TO CONSERVATISM?

2.
IN THE SHADOW OF GOLDWATER

It Didn’t Start with the Tea Party

3.
FROM RADICALISM TO GOVERNING

4.
THE END OF THE REAGAN MAJORITY

M2E2 and the Right’s Achilles’ Heel

6.
PUT ON A COMPASSIONATE FACE

The Promise and Limits of Compassionate Conservatism

George W. Bush, Karl Rove, and the Search for a Fourth Way

How W. United the Country, Then Divided It More than Ever

The Tea Party Explosion That Was Waiting to Happen

11.
THE LOGIC OF OBSTRUCTION

Why Conservative Opposition to Obama Was Inevitable

The Making and Unmaking of Mitt Romney

13.
SAYING YES AND NO TO OBAMA

The Two Electorates and the Cycles of Dysfunction

14.
THE FEVER THAT WOULDN’T BREAK

15.
REFORMING CONSERVATISM OR TRUMPING IT

A New Conservatism, a New Pizza Box, or Something Completely Different?

The Conservative Challenge and America’s Future

INTRODUCTION
What Happened to Conservatism?
Why Reforming the Country Requires Transforming the Right

The history of contemporary American conservatism is a story of disappointment and betrayal. For a half century, conservative politicians have made promises to their supporters that they could not keep. They offered stirring oratory that was not commensurate to what was possible. They described a small government utopia that was impractical and politically unsustainable because it required wrenching changes to government that most Americans didn’t want. They denounced decades of change, pledging what amounted to a return to the government and the economy of the 1890s, the cultural norms of the 1950s, and, in more recent times, the ethnic makeup of the country in the 1940s. This proved to be far beyond the capacity of politics. Most Americans—including a great many who were neither very liberal nor radical, and especially the young—did not want to go back.

Conservatives have won many elections since their movement began to take control of the Republican Party more than a half century ago. But these victories produced neither the lasting electoral realignment that conservative
prophets kept predicting nor the broad policy changes the faithful hoped for. For the rank-and-file right, the sense that their leaders had failed them and the political system had shortchanged them created a cycle of radicalization. We are living with its fruits today.

The Trumpification of Republican politics during the summer of 2015 provided gaudy confirmation that something is amiss. It’s true that Donald Trump’s unlikely insurgency reflected the complete fusion of the culture of celebrity with politics that the billionare builder, television star, birther, and self-promoter perfected. His rise could certainly be seen as part of a distemper that bred a mood of anti-Establishment protest across the world’s democracies. But the deeper ideological force behind Trumpism is rooted in history. It was compactly summarized by Erick Erickson, editor of the popular right wing blog RedState.
“The Republican Party created Donald Trump,” he said, “because they made a lot of promises to their base and never kept them.”

It is a problem that goes a long way back. Since 1968, no conservative administration—not Richard Nixon’s, not Ronald Reagan’s, and neither of the Bush presidencies—could live up to the rhetoric conservative politicians deployed to rally their supporters. Their appeals were rooted in the aspirations of the Goldwater movement that began reshaping American politics fifty years ago. The hopes Goldwater inspired were regularly frustrated. In response, movement conservatives advanced an ever purer ideology, certain that doing so would eventually bring them the triumphs that had eluded them over and over.

Consider the steady march rightward. The collapse of the Nixon presidency led to the rise of Ronald Reagan. The defeat of George H. W. Bush led to Newt Gingrich’s revolution. The reelection of Bill Clinton pushed Republicans to impeach him. The partial exception to this pattern is George W. Bush. Yet by the time his second term was over, the cycle reasserted itself as his failures led to the rise of the Tea Party.

The second President Bush initially undertook a partial modernization of the right, preaching “compassionate conservatism” and seeking, in effect, a “Fourth Way” in response to Clinton’s “Third Way” between left and right. But Bush’s modernization project was incomplete, in many ways superficial,
and short-lived. After carefully examining the reasons behind Bush’s loss of the popular vote in 2000, Karl Rove, the architect of Bush’s victories, concluded that moderation was a less effective political tactic than rallying the conservative faithful—and two wars eventually engulfed the administration, creating new sources of radicalism around national security questions and, for some on the right, attitudes toward Muslims.

Bush’s difficulties, of course, might have led to a search for a more moderate conservatism. Instead, conservatives quickly defined Bush as an advocate of “big government” whose failures owed to his refusal to be conservative enough on spending, immigration, education, and Medicare. A return to the true faith was the only prescription on order. The result was the Tea Party, which was as much a reaction to Bush as to the election of Barack Obama. The long journey to the right continued.

This process has been self-reinforcing. The rise of cultural and religious conservatism, along with the emergence of the white South as the central pillar of the Republican Party, called forth a counter-realignment. As middle-of-the-road and progressive Republicans outside the South fled the party, it lost voters and leaders who would have supported moderate or moderately conservative candidates in primaries.
The numbers tell the story: between January 1995 and January 2015, the proportion of Republicans who called themselves “very conservative” nearly doubled, from 19 percent to 33 percent. When even Eric Cantor, the very conservative former House majority leader, could be felled in a primary for being insufficiently faithful to the ideas of the right, no Republican could feel truly safe from challenge.

This is why the most important political development during Barack Obama’s years in office was not the rise of a new progressive governing coalition that so many on the center-left anticipated when he swept the country in 2008. That coalition may yet become dominant. Demography is on its side, and it has proven its power in two consecutive presidential elections. But Obama’s tenure also coincided with the climax of a half century of political agitation that transformed the Republican Party and American conservatism. The breakdown in American government and the dysfunction in our politics are the result of the steady radicalization of American conservatism—along with Obama’s failure to anticipate it and his tardiness in dealing with
it. Obama’s dreams of overcoming the divisions of red and blue America and of putting
“unity of purpose over conflict and discord” were stillborn.

Obama eventually came to terms with the nature of the opposition he faced and acted accordingly. The substantial achievements of his final years in office were usually brought about unilaterally, without the support of Republicans—and, most often, in the face of their strenuous resistance. This was true of his steps toward immigration reform, his measures against climate change, the normalization of relations with Cuba, the nuclear deal he negotiated with Iran, and a host of other measures.

There are many accounts of Obama’s presidency that lay the blame for his difficulties on personal failures—on his well-known reluctance to court and curry favor with Congress, his standoffishness, his reliance on a tight circle of personal aides, his tactical mistakes. Obama certainly had his shortcomings. But to assume that Obama was ever in a position to build broad support among Republicans for his program ignores their determination, from the very first day of his presidency, to prevent progressive policies from taking hold. More effective schmoozing and more invitations to the White House might have been nice, but they would not have solved Obama’s problem. The fierceness of the opposition he faced had deep structural and historical roots in the long-term changes in conservatism and in the Republican Party.

This book offers a historical view of the American right since the 1960s. Its core contention is that American conservatism and the Republican Party did not suddenly become fiercer and more unyielding simply because of the election of Obama. The condition of today’s conservatism is the product of a long march that began with a wrong turn, when first American conservatives and then the Republican Party itself adopted Barry Goldwater’s worldview during and after the 1964 campaign.

Goldwater was personally appealing, principled, and candid. In the final years of his life, he became more moderate himself, uneasy with the direction in which many of his followers took the movement he did so much to build. Nonetheless, the radicalism of conservatism in our day is not primarily the product of the Tea Party. Rather, the Tea Partiers are the logical consequence of the ideology Goldwater preached. Goldwaterism, in turn, was rooted in the reaction of large sections of American conservatism to the New Deal
in the 1930s, 1940s, and 1950s, and of a revolt against the efforts of more moderate conservatives to come to terms with the America FDR and his successors had created. The Tea Party was simply preaching the Goldwater creed in all its purity.