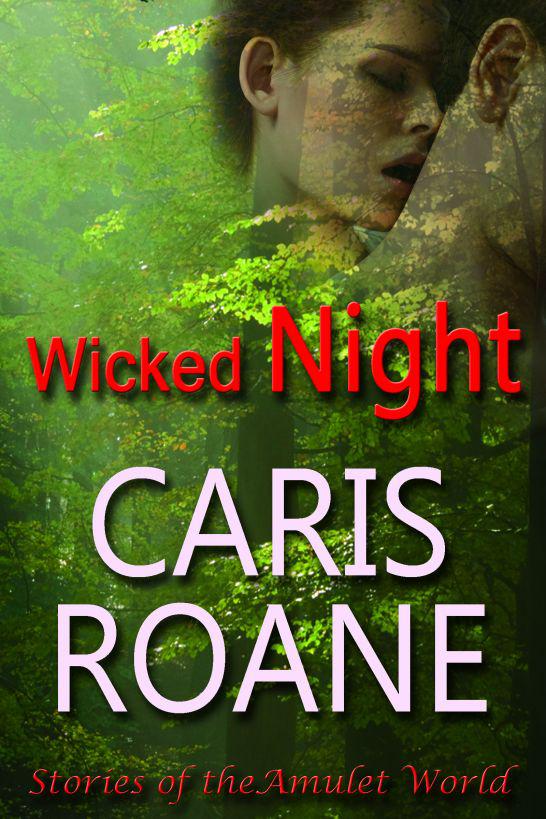 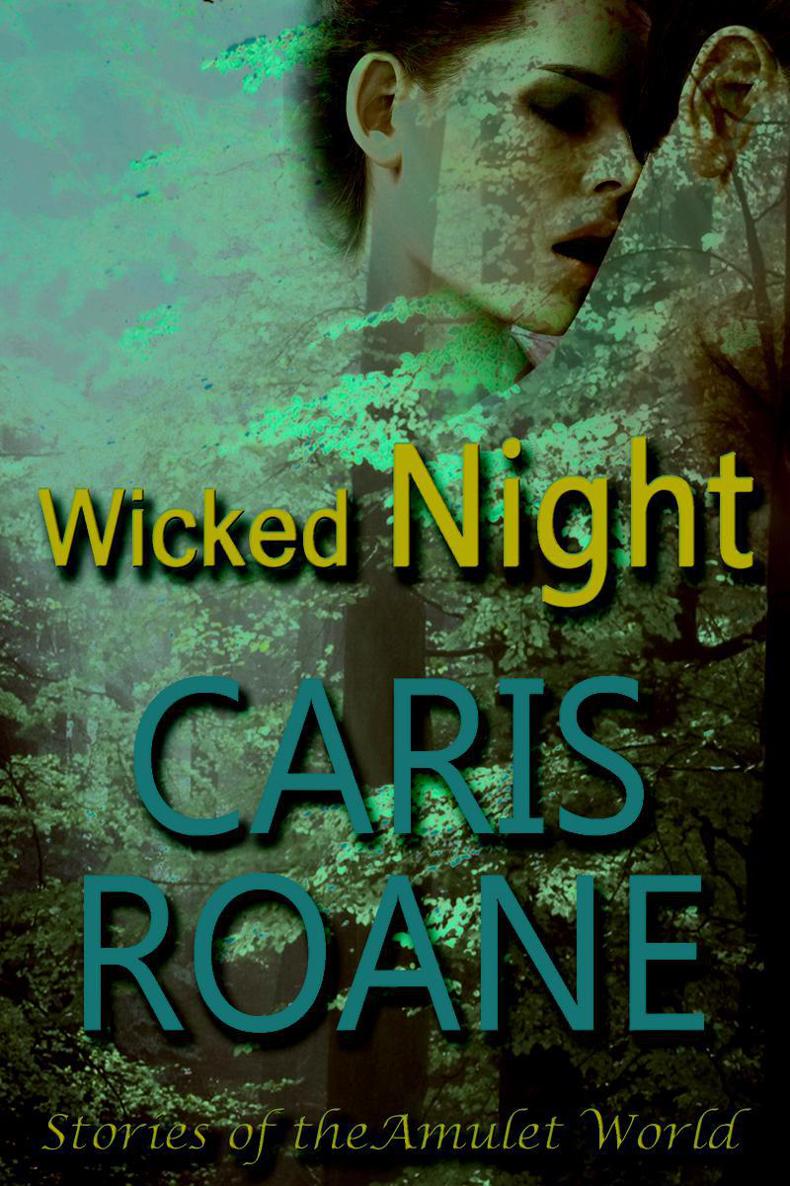 All rights reserved. No part of this eBook may be reproduced in whole or in part, scanned, photocopied, recorded, distributed in any printed or electronic form, or reproduced in any manner whatsoever, or by any information storage and retrieval system now known or hereafter invented, without express written permission of the publisher, except in the case of brief quotations embodied in critical articles and reviews.

This is a work of fiction. Names, characters, places, and incidents are products of the author's imagination or are used fictitiously. Any resemblance to actual events, locales, or persons living or dead is entirely coincidental.

WICKED NIGHT
is my first short novella set in the World of the Amulet!

Many of you know me from my Guardians of Ascension series, published by St. Martin’s Press, beginning in January of 2011 with ASCENSION. Or from my Blood Rose Series that began with the publication of EMBRACE THE DARK in May of 2012.

For some time now, I’ve wanted to write a novella series that was a shorter length to satisfy readers who want a quick read. Because vampires are still my favorite, the world of the amulet is dominated by master vampires. Each master has a forge located deep in his tribe’s home. By ancient tradition, and through formulas passed down from one century to the next, the master creates amulets of varying purposes which he then uses to barter with his supplicants.

The first novella,
WICKED NIGHT
, takes us to Reavenshire, ruled by Gabriel. When a human-fae comes to him in desperate need of a healing amulet, he barters ruthlessly, asking for what he desires the most: the woman, Thea.

I hope you enjoy this new take on paranormal lore.

WICKED NIGHT
is a novella of 13,000 words, which is an approximate paperback length of 43 pages. For more information about the series, visit me at:
www.CarisRoane.com

For lots of Facebook fun, you can find me posting frequently on my wall. I also encourage my fans to post, so there’s lots of sharing of music and pics of all kinds. Facebook search:
Caris Roane
.

Prior to writing sensual paranormal romance, I wrote
sweet
Regency Romance for Kensington Publishing Corp., and was fortunate to publish almost 50 Regency novels and novellas during that time under the pseudonym, Valerie King. In 2005, Romantic Times honored me with a Career Achievement Award in Regency Romance. You can learn more about my Regency work at:
www.ValerieKing-romance.com

I’ve been blessed to write romance all these years.

I hope you enjoy,
WICKED NIGHT
!

The vampire, Gabriel, of French descent, felt victory flow like a slow-burning fire through his veins. The widow Thea, the woman he had been trying to seduce for the past two years, stood before him. She had stated her request for an amulet and he had the power to grant her request, so long as she was willing to pay the price.

“For what purpose do you require an amulet,
cherie
?” Even after two-hundred-years, he had not lost his French accent, but the women did not seem to mind.

“For healing,” she responded. “My mother is nearly at the point of death. She went into the bogg-woods in search of the Witch’s Flower and returned with a fever. She has been ill since.”

The vampires in the room hissed. The bogg-woods were full of evil vapors and now Thea’s mother was dying.

He leaned forward. He saw the tension around her eyes. He knew Thea well, especially her love for her mother. He did not like to see her distressed.

He sat on his throne, in his large audience room, in the deep underground caverns that he had shaped into his tribe’s communal home. He spent part of each night hearing the requests of numerous supplicants, most of them made for his powerful amulets. Every master vampire had a forge deep within his lair where he created his amulets according to the ancient traditions. Each carefully worked piece enjoyed a unique property that would serve the borrower.

As he met Thea’s gaze, he sighed with satisfaction. He felt like a hunter who had been on a very long chase through the forest, stalking a deer, and had finally brought down his prey.

She was
tres belle
with long brown hair that was very fine and very soft, and tended to curl just at the tips. Her dark brown eyes glittered in the soft candlelight of the chamber. Her waist was narrow and her hips flared in a womanly manner, which suited him perfectly. Her full breasts pushed at the cherry red sweater she wore, beckoning him. Only last night, he had discovered how sensitive they were since he had suckled them for the first time, feasting on her bounty.

Now she was here.

Though he felt like a bastard, he had waited too long for her to do more than ask, “And what price are you willing to pay for the amulet?”

She did not answer at first. Finally, she lifted her chin, just a little. “Anything you desire, of course.”

He was aroused, his normal state when he was around Thea.
Merde
, even his fangs throbbed in his gums because her blood called to him. She was human and fae, a mix he found intoxicating.

She lifted a brow at that. He repressed a smile. Thea argued with him constantly about his view of Reavenshire. He saw the land as his territory and everyone in it under his protection and therefore, to a degree, subject to his command. She had a different view involving autonomy and freedom.

His gaze fell to her throat. His fingers gripped the armrests, pressing into the soft red fabric. He shifted in his seat. The tight leather pants he wore rubbed his arousal in the nicest way. He would take her blood soon, blood she had denied him. Until now. His nostrils flared and he trembled.

His blood-lust for the widow went deep, like a drill boring through the toughest layers of stone. Once he had caught the scent of her blood all those months ago, nothing else seemed to satisfy. He took from willing donors, of course, but only just enough to stay alive. He was, therefore, in a state of blood-hunger most of the time.

And there seemed to be no end of ways that he had fantasized about taking her blood, especially with his fangs in her neck and his cock buried deep inside her.

Merde,
if he was not careful, the cursed woman would become an obsession, which was just a short distance away from a binding. He had promised himself, vowing by all the ancient vampire lords, never to be bound to any female, nonetheless a fae-human. Such bindings always ended in an incessant worthless battle. He had seen it a thousand times over his two centuries of living, his parents the prime example.

He rose from his throne and extended his hand to her. “Come with me and we will settle the matter of the amulet between us. In my private quarters.”

“As you wish, master.” Thea moved forward and stared at Gabriel’s long white fingers and manicured, buffed nails. He was a powerful vampire who attended to his appearance.

She tried to ignore what she could see was his fully aroused state. The snug black leather of his pants left little to the imagination. The crown of his cock strained against his waistband and she was sure that if he had not been wearing a shirt, she could have seen the tip of him.

She supposed it was part of his vampire attraction that his eyes would be as exquisite as they were, but she swore she could look at them for hours. In his eyes, his soul shimmered, something the fae part of her felt and also part of her attraction to him. He was not wholly evil as he liked to pretend.

Yet her casual involvement with Gabriel was by no means simple. She had once seen him save a troll child from galloping horses. He had flown through the air and swept up the child in his arms just before the calamity would have mangled every small bone.

The incident had shaped her willingness to spend time with him and which had ultimately led her to permit him last night’s suckling.

She hadn’t been with a man since the evil Mage vampires killed her husband five years ago. She had loved him and had given him several children, all grown. But her home was empty now and for a long time she’d wanted her life to change. Still quite young by long-lived standards, she needed a man to warm her bed.

She placed her hand within his, the weight of the act weakening her knees. When he sighed, she shifted her gaze to his eyes, his beautiful green eyes glittering with desire.

His voice was low as he said, “I have longed for this moment,
cherie
, a thousand fold since first seeing you. And I still have the taste of your breasts in my mouth from last night.”

Her cheeks warmed. He had so much power over her, more than he imagined. She had resisted his seductions with every breath of her body, but she had craved him terribly.

Now she was here.

“You are charming when you blush.”

He guided her to the dark arched hallway behind his throne, a passage that led to his private chambers. “I must tell you one important thing,
cherie
. The healing amulet is not here. I gave it to Master Eligio of Fealconshire for one of his supplicants.” The vampires of the Great North Shires were numerous and powerful and lived in large communities or tribes, each run by a master vampire. Gabriel continued, “We will go to Eligio a little later to retrieve it. And I vow that before dawn crests the hills, your mother will have the amulet.”

Thea nodded, relief allowing her to draw a deep breath. “Thank you, Gabriel.”

He squeezed her arm. “I had thought to win you in a very different way, but I am glad you came to me.” Once out of sight of his audience room, he pulled her into his arms. “Thea,
cherie,
I have waited so long…” He slanted his lips over hers.

Thea surrendered, melting against him. All the pent up frustrations of holding back for two long years released in a wave of desire so strong that Gabriel pulled back, panting. “Thea.
Mon dieu
.”

He then picked her up to carry her in his arms and before she knew what he intended, he was levitating and flying swiftly down what proved to be a long passageway deep into the earth.