Read wicked witches 06.9 - you only witch once Online

wicked witches 06.9 - you only witch once 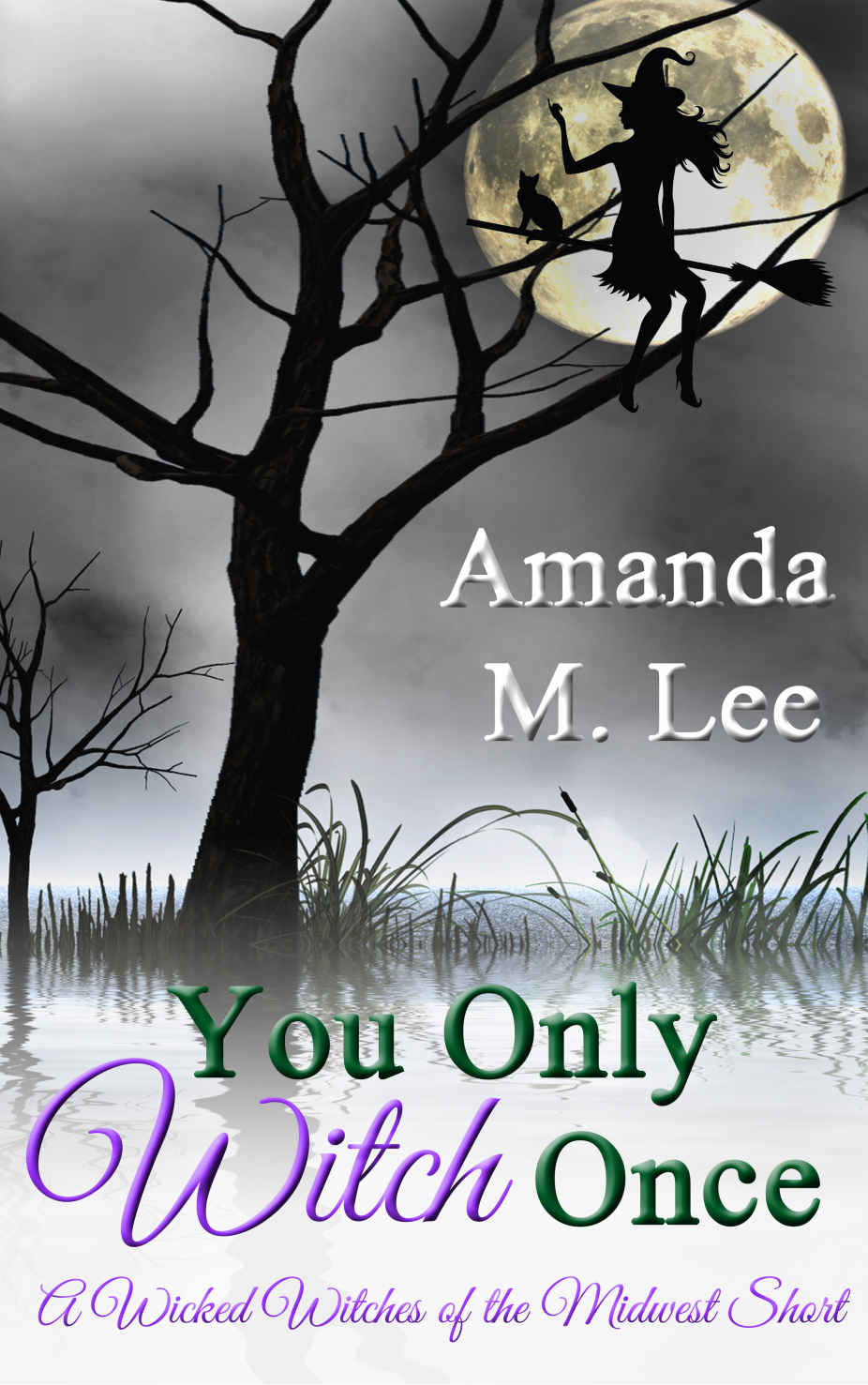 You Only Witch Once

A Wicked Witches of the
Midwest Short

Sometimes children are quiet. Sometimes they’re playful. Sometimes they’re pleasant. Most of the time they’re lovable – even when they’re obnoxious. The one stomping her foot and swinging her blond hair around at my side was none of those things. Don’t get me wrong, I love her. But glad she’s an only child. If there was more than one of her I worry I’d turn into one of those mothers who lock their child in the basement to gain some peace and quiet.

I sucked in a breath to calm myself, turning my attention from the cooler of food I was packing, and fixed Bay with a serious look. “You’re going.”

Bay crossed her arms over her chest, causing her tank top to ride high on her narrow frame, and her blue eyes were murderous as she regarded me. “I don’t want to go.”

Instead of matching Bay pout for pout, I opted to try to reason with her. “Why don’t you want to go? You were excited about summer camp the last time I checked. It’s only four days. It’s not as if you’re going to be living there permanently.”

“I was excited for summer camp when I thought I was getting away from you,” Bay said, her barb pointed and sharp. “Now you’re going. No one wants their mother there. It’s embarrassing. How is that supposed to be fun for me?”

“It’s not my fault,” I said. “Donna Wilder was supposed to run the girls’ camp with her sisters, but … well … she’s gone missing. Either camp gets cancelled or your aunts and I run it ourselves. We thought we were doing you a favor.”

So much for reasoning. “You’re going,” I said. “Clove and Thistle are going. Marnie and Twila are going. Heck, even your Aunt Tillie is going. We’re all going, and we’re all going to have a good time. So stop your screeching and … go pack or something.”

Bay’s eyes widened, this time in fear instead of anger. “Aunt Tillie’s going?”

I nodded. I wasn’t any happier about the situation than Bay, but leaving my aunt home without supervision is never a good idea. I figured she could help keep the kids in line, even if she terrorized them at the same time. Most of the kids in town were afraid of Aunt Tillie. Bay, Clove and Thistle knew exactly what she was capable of, though, so they were more likely to behave if they thought Aunt Tillie might curse them into submission.

My name is Winnie Winchester and I’m a kitchen witch. In fact, I come from a long line of witches. My mother was a witch, although her soul is now at rest. My aunt is a witch, even though she likes to embrace the darker arts to get her own way more than anything else. My sisters are also kitchen witches – and drama queens. As the oldest, it’s been my sad lot to rein them in when they gallop off the rails. I worry Bay is going to have to play the older sister role for Clove and Thistle, too. I’m worried she’s not bossy enough for the job. Thistle might inherit it out of sheer determination, if not age.

“She won’t ruin anything,” I said. “She’ll be a lot of fun.” Sometimes you have to lie to your kids, because … well … if you tell them the truth they’ll scream. I’ve had my fill of screaming for one day.

“She won’t be fun,” Bay whined. “She’ll threaten everyone with curses.”

“That could be fun.”

“This one,” I said, tugging Bay’s long hair to pull her attention to me. “I promise you’re going to have a good time. Everything is going to be fine. I’ll go out of my way not to embarrass you.”

“What about Aunt Tillie?”

That was a loaded question. “She’ll be … on her best behavior.” Of course, that wasn’t saying much.

Bay quieted for a moment, and I thought I was finally getting somewhere with her.

“WHERE
did you put the meat?” Marnie asked, tucking her dark hair behind her ear and surveying the picnic table dubiously. “We need to feed these little monsters before they turn on us.”

As the middle sister, Marnie was supposed to be the calming force between sister storms. Instead, she was the tornado at the epicenter. As a mother, she had it easy. Even though Clove was a drama queen, she was the easiest to get along with. Clove was a thinker, and she often worked out the end scenario before Thistle and Bay even jumped on the idea. That made Marnie’s life much easier than mine.

For my part, I was the mother of a dreamer, and Bay’s head was often in the clouds. I had no idea what she was dreaming about, but whatever it was made her equal parts happy and sad depending on the day. She lost herself in deep thoughts – and regret – and contending with the swings was tiring. I had hope she would grow out of it, but I knew that time was still far off.

Of course, my job was easier than Twila’s. My free-spirited sister was the least grounded of us all. She raised Thistle with a certain bohemian flair that lent itself to lax parenting. Thistle was loud and obnoxious, and she was also desperate for the attention Twila naturally absorbed. Despite her propensity for bullying, I never worried about Thistle. She was always ready to fight, and her fierce loyalty meant that she was ready to fight for anyone she deemed worthy. The list was short, but Thistle was a scrapper.

“It’s in the blue cooler,” I said, turning to Marnie. “I say we go simple tonight and just do hot dogs.”

“Can we drug them with sleeping pills?” Marnie asked.

That was an interesting suggestion. “No,” I said finally. “Keep them handy, though.”

“I brought two bottles,” Marnie said. “With thirty pre-teen girls to deal with, there’s going to be a lot of drama. I’m so glad you volunteered us for this.”

I rolled my eyes. Marnie likes to get in digs whenever she can. She knows exactly how to irk me. “It was either run the camp ourselves or cancel it. The girls were looking forward to it.”

“Really? We’re still embarrassed by the things Aunt Tillie does and I’m nearing thirty,” Marnie said. “When am I going to outgrow that?”

She had a point. Still … wait a second. “Nearing thirty? You’re thirty-three.”

“No, I’m not,” Marnie said, crossing her arms over her chest. “I’m twenty-nine.”

“Oh, so you had Clove when you were high school? I always knew that reputation the football players whispered about was well-earned,” I said.

Marnie scowled. “I’ve decided I don’t like being in my thirties,” she said. “I’m now officially twenty-nine … forever.”

I wanted to laugh, but that seemed like a legitimate way to go. “You can’t be twenty-nine forever,” I said. “I’m a year older than you, and I don’t want to be thirty either. I’m twenty-nine. You can be twenty-eight.”

“Fine,” Marnie said. “I want credit for this idea, though.”

She always wants credit. It’s a terrible trait. “You can’t have credit,” I said. “I was the one who made you a year younger. I should get the credit.” Okay, I can admit it. The trait runs in the family.

“This is so much fun,” Twila bubbled, appearing at the edge of the picnic table with a stack of paper plates. “Do you remember when we went to this camp as kids? We had so much fun.”

“Yeah, and do you remember how much we hated the chaperones?” Marnie asked, raining on Twila’s effusive parade. “We’re now the chaperones.”

That was Twila’s problem in a nutshell. She has an inflated sense of ego, and she’s more interested in being Thistle’s friend than parenting. That’s how Thistle got to be such a little bully.

“That doesn’t sound like any fun at all,” Twila said, pouting.

“Oh, yeah, you’re twenty-seven now,” I said, brightening. “You can thank me later for thinking of it.”

“I thought of it,” Marnie said. “You just leeched on to my idea.”

“I took your pathetic little germ of an idea and made it better,” I argued.

“Whatever,” Marnie said. “Speaking of germs, does anyone know where Aunt Tillie got to?”

“I told her to make sure all the girls were settled in the cabins,” I said. “There are thirty girls and three cabins, so there are ten to a cabin.”

“That should go over well,” Marnie said. “Did you make sure to tell Aunt Tillie to keep Lila Stevens far away from Bay?”

I nodded, my heart clenching. I know you’re not supposed to hate children, but every rule has its exception, and Lila Stevens is the exception to that rule. She’s a viper. You can see already that she’s going to grow up to be a rotten adult – just like her mother. For some reason, she’s fixated on Bay. She knows there’s something different about my little witch – and there is – but Lila doesn’t know what it is. She can’t put a name to her fear. So, instead of trying to figure it out and be friends, she’s mean and nasty. If Lila were to get lost in the woods I wouldn’t shed a tear. Oh, I’d call for a search party … after she’d been missing for a few hours. A little suffering won’t hurt her, and it might straighten her up a bit. Of course, that might be wishful thinking.

“I told Aunt Tillie to put Lila in the cabin closest to the campsite and Bay, Thistle and Clove in the one closest to the woods,” I said. “That way they only have to cross paths at meals.”

“What about while swimming and kayaking?” Marnie asked.

“I figured we would take them in separate groups,” I said. “Can we just please try to keep Lila away from Bay?”

“You know that you can’t protect Bay forever, right?” Marnie asked, her dark eyes serious. “Sooner or later, she’s going to have to stand up to Lila on her own.”

“It’s the hormones,” Twila said. “They’re at that age where their bodies are blossoming into womanhood and they don’t know what to do with the new feelings and emotions.”

“Blossoming into womanhood?” Marnie arched an eyebrow. “Yeah. You’re going to be chaper-fun. Keep saying things like that. We should start a pool to see when you go missing. I’ll keep checking the shed to see whether they’ve locked you up in there.”

“Whatever,” Twila said. “I … .” She broke off, her gaze trained on the parking lot over my shoulder.

I turned swiftly, following her line of sight, and swallowed hard when I saw two familiar figures heading in our direction. How could I have forgotten?

“Aunt Willa,” Marnie said, rubbing her hands on her pants to clean them. “I … forgot you were bringing Rosemary to camp this year.”

Damian (The Caine Brothers #3) by Margaret Madigan
Jack Chiltern's Wife (1999) by Nichols, Mary
The Heart Denied by Wulf, Linda Anne
Edge of the Past by Jennifer Comeaux
The Fortunates (Unfortunates #2) by Skyla Madi
The Outlaw Takes a Bride by Susan Page Davis
Touch of the Clown by Glen Huser
Killer of Killers by Mark M. DeRobertis
Rev It Up by Julie Ann Walker
Rowan's Lady by Suzan Tisdale