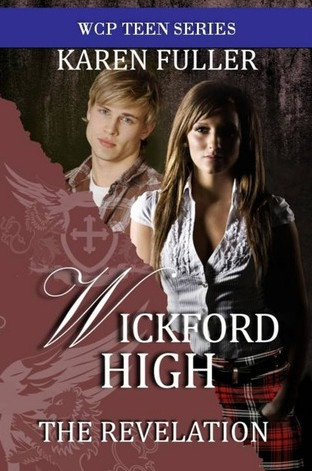 This is a work of fiction. Names, characters, places and incidents are products of the author’s imagination or are used factiously and are not to be construed as real. Any resemblance to actual events, locations, organizations, or person, living or dead, is entirely coincidental.

Enduring Romance Blogspot-Great Review
Heat wise this is a mild read. I recommend it for all
fans of YA paranormal romance, especially if they enjoy books evolving around high school (I
do!). I hope to be reviewing the rest of this series as it gets released.

make this story so believable. I eagerly look forward to reading the next book

in the series, Furiously Tempted , which should be coming out soon. Don't pass

this new series up!

Great Review from The Phantom Paragrapher
Sometimes it's the small publishing companies
that release the awesome books to read, the ones that give unknown authors a chance to shine, to
make their mark on the world. Author Karen Fuller is one of those authors, she has just released
a new series called Wickford High - it is set in a community, a small town -where the majority of
the families have some kind of Supernatural power - it reminded me a bit of the Television Show

Paranormal Romance Guild Let me tell you people, is this the start of a great new storyline??? I loved it and I am not a young teen...Book is coming out August 31st, 2010. Review by Gloria Lakritz-Senior Reviewer

Vicky Phillips slowly pulled her ’99 Ford Mustang into the school parking lot and parked it.

She gripped the steering wheel tightly, and she stared forlornly at the sign on the large brownstone school, which stood ominously before her. A chill ran down her spine in the late August heat. “Wickford High. Proud home of the Packwolves since 1886?” she read out loud.

“What kind of name is that for a school team?” She rolled her eyes and laughed at herself for allowing that eerie feeling to consume her. “Yea team,” she said sarcastically.

She looked into her rearview mirror for a last minute personal check. Her eye makeup was perfect, making her large brown eyes framed in lush black lashes look even more exotic. She fumbled through her bag and found her lip gloss to put the finishing touches on her pale pink full lips. She quickly brushed her fingers across her high cheekbones to tone her makeup down a bit, and she glanced at her bag and tossed the lip-gloss back into it. She looked in the mirror again and adjusted her head in a couple of different angles to make sure her shoulder length light brown hair fell just right. She plucked a couple of curls to reposition them around her oval face.

She took a deep breath and blew it out dramatically. “You can do this . . . It’s just a new school in a small town.” She grimaced and swallowed hard. “Even though it looks like something straight out of some horror movie . . . there’s nothing to be afraid of. You’ll get inside and be your old popular self.” She squared her shoulders in determination and glanced in the mirror one more time for good measure.

Now that she was finally satisfied that she looked presentable, she opened the car door, slid out of the car, and grabbed her bag. She threw the bag over her shoulder and looked around. Her mouth dropped open, and her heart sank. “Oh God, what have I just gotten myself into,” she groaned. Everyone was wearing school uniforms. The girls were wearing navy blue polo shirts with white and blue plaid skirts. The guys were wearing navy blue dress pants and white polo shirts. She looked down at herself and groaned again. Her slender five foot-five-inch frame fit nicely in her tight hip hugger jeans, stacked high heels, a red form fitting top, and all the fashionable jewelry accessories. She rolled her eyes. “So much for blending in, now everyone’s really going to notice me,” she grumbled to herself, “and not in a good way. Hey, look at the dork who thinks she can make her own rules and dress the way she wants to.” She would have fit right in at her high school back in Fort Lauderdale, but here, in this backwoods town, she couldn’t look more out of place.

If her mom hadn’t just died, and her dad hadn’t taken that new job and uprooted her from her home, she wouldn’t be in this mess. She shook her head and blew out a breath. “Thanks, Dad,” she grumbled to herself, “I have always had a dream to be the new girl at school, in a new town, starting my senior year, and to top it all off I have to be the dork without a uniform.” She looked up to the Heavens. “Please tell me that this is a bad dream, and that this isn’t happening to me.”

“I’ll tell you anything you want to hear, because I think I’m dreaming too.”

Vicky whipped her head around at the sound of a male voice. She flushed deeply at being caught talking to herself. For once, she was speechless.

He laughed at her expression. “Awe, don’t be embarrassed. I won’t tell anyone that I caught you talking to yourself.” If at all possible, Vicky turned an even deeper shade of red. “Hi, I’m Luke Wolfburn . . .”

Vicky took a moment to get her composure back and observe the gorgeous hunk standing before her. He was about six foot, with a strong athletic build that was even noticeable through the loose-fitting white polo shirt. His blond hair was cropped close on the sides and in the back and was a little longer and slightly wavy on the top. His skin was tanned dark like he had been kissed by the sun. He had soft brown eyes, a straight nose, and a crooked flirtatious smile. She couldn’t help but smile back. “Hi Luke, I’m Vicky Phillips. I guess you have already guessed that I’m new here.”

“Huh . . . you don’t say.” She flushed again, and Luke laughed. “I’ve recently heard my dad mention the name Ryan Phillips. Are you any relation?”

He gave her a crooked grin and winked. “Look at me rubbing elbows with the famous freelance news journalist’s daughter. I had better stay out of trouble if I don’t want my name plastered over the national news. Maybe I had better stay on his good side. If he knows that I’m your friend, he might take it easy on me.”

She laughed. “I’m afraid that wouldn’t help. My Dad never seems to like any of my friends.

It might stand better for you if he doesn’t know that you know me.”

His crooked grin got bigger. “I’ll keep that in mind. Hey, I thought all the big reporters lived in the big cities.”

She shrugged. “He’s freelance. He can work where he wants. He’s taken an office in the local paper, but he submits most of his work to the large papers by internet. It keeps the crazies, and the people who might not like what he wrote about them away. We don’t say where we live to keep our privacy intact.”

Luke nodded. “Your privacy is an important thing. I’m glad you both decided to make your home here. Come on. I’ll show you to the office so that you can get your class schedule. Maybe they’ll put us in some of the same classes.” He reached over and closed the door to the Mustang.

She smiled up at him, and he stepped forward and draped his arm around her shoulders and steered her toward the school. “Welcome to Wickford High, Vicky.”

She looked up to him as they walked. “Thanks, Luke. Is everyone around here as friendly as you are?”

The smile left his face. “Uh . . . I might be the exception to that rule,” he said seriously.

“Usually it takes awhile for an outsider to be accepted here.” He shook his head sadly. “I’ve lived here all my life, and I don’t understand it. It takes people awhile to take to new people. It’s like the others don’t trust ‘um. Please don’t take it personally.” He smiled at her again and squeezed her shoulders. “I like you already, Vicky. You can talk to me anytime.”

They walked up the six steps leading to the front door, and Luke let go of her shoulders and ran ahead. “Here, let me get that door for you.”

He opened the door and she grinned up at him as she entered the building. “Thank you again, Luke.”

He grinned. “It’s my pleasure helping a pretty girl like you.”

She rolled her eyes. “You’re going to spoil me. A girl could get used to this.”

His grin grew larger. “You better get used to it then, because I plan on spoiling you.”

She laughed. “Luke, do you flirt with all the new girls like this?” she joked.

He rolled his eyes. “Of course I don’t. We haven’t had a new girl at this school in about ten years.”

Vicky did a double take, and her mouth dropped open. She stopped dead in her tracks. “Did you just say ten years?”

He grinned again and turned to face her. “Yep, we don’t normally get new families moving into the area. Our little town is in the middle of nowhere.” He shrugged. “If a new family makes it through the first few months here, they usually stay.”

She shook her head in disbelief. “In Fort Lauderdale, we had people moving in and out of town all the time.”

Luke’s eyes sparkled. “This is about the furthest thing from a big city that you’re likely to find. We don’t usually even get people just passing through.” Luke stepped up and draped his arm over her shoulders again. “Come on, or we’ll be late for class.” They took a few more steps and Luke stopped. “Well Vicky, this is the office.” He pointed inside the door. “That nun sitting behind the counter is Sister Phoebe, the office secretary. She’ll be the one to give you a schedule.

I have to go to class. It was nice meeting you, and I hope to see you in some of my classes.”

She smiled up at Luke. “Thanks, I’m really glad I met you. I hope we have some classes together too. See ya later.”

Luke turned to hurry to class. “Bye, Vicky. I’m sure I’ll see ya around.” he said over his shoulder.

Vicky squared her shoulders and turned to face the office again. She took a deep breath and charged into the office.

Sitting behind the counter was a large robust nun with pudgy stern features. Her attention was centered on the large stack of papers in front of her. Vicky walked up to the counter and stood there. After a few seconds of being ignored, Vicky put her hand on the counter and drummed her fingers. She rolled her eyes and cleared her throat. “Excuse me, Sister Phoebe?”

Sister Phoebe didn’t raise her eyes to acknowledge Vicky. “Students don’t speak until they are spoken to first,” she said sharply.