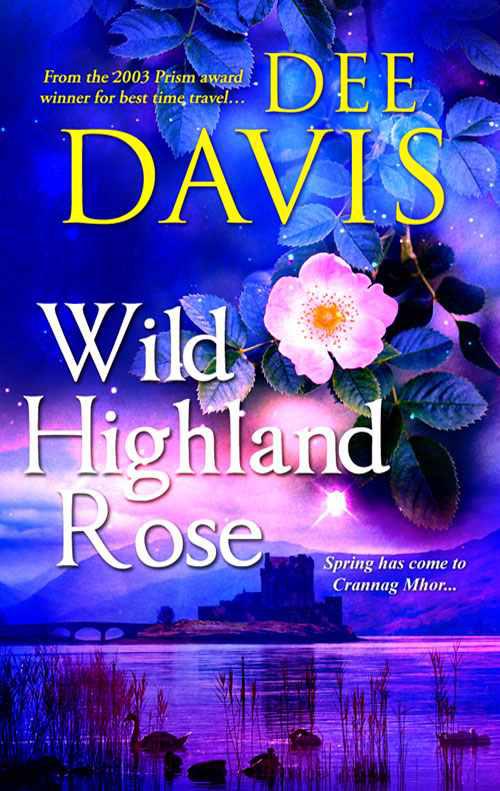 "
Put the soundtrack to Brigadoon on and enjoy the ride. Ms. Davis has delicately crafted a beautiful story that will leave you wanting more.
"
--
Huntress Reviews, 4 stars

"
Wild Highland Rose will only solidify the belief that Dee Davis is one of the premier voices in time travel romance today. With her first novel Everything In Its Time she set the bar high for quality and superb story telling and with each new release she pushes it up a notch.
"

"
WILD HIGHLAND ROSE is a wonderful story of love and loyalty to family and country.

In this reviewer
'
s opinion, a talent like Dee Davis has neither boundaries nor genre constraints; this lady can captivate the reader with a modern day romantic thriller or a centuries old time travel.
"
-- Reader to Reader

Wild Highland Rose
is a work of fiction.  Names, characters, places, and incidents are the products of the author
'
s imagination or are used fictitiously.  Any resemblance to actual events, locales, or persons, living or dead, is entirely coincidental

Originally published as a mass market paperback in the United States by Dorchester Publishing.

No part of this book may be reproduced or transmitted in any form or by any electronic or mechanical means, including photocopying, recording or by any information storage and retrieval system, without the written permission of the publisher, except where permitted by law.

This ebook is licensed for your personal enjoyment only. This ebook may not be re-sold or given away to other people. If you
'
re reading this book and did not purchase it, or it was not purchased for your use only, then please delete it and purchase your own copy. Thank you for respecting the hard work of this author.

Sneak Peek of The Promise

Hell with the Ladies  (Marcus)

Silent Night (Still of the Night)

To Julie, Kathleen, Barbara and Chris

As fair art thou, my bonie lass,

So deep in luve am I;

And I will luve thee still, my dear,

Till a' the seas gang dry.

He was floating in darkness
—
deep, impenetrable darkness.  He tried to open his eyes, to see.  But there was nothing.  Only the dark, its blackness surrounding him like a living thing.  Moving.  Breathing.

He lay still, focusing on the sound, listening to the rhythm.  A beep, sharp and high pitched, provided counterpoint for the hissing, a fractured melody of sorts.

The sounds washed over him, their hypnotic tempo soothing, seductive.

He tried to move an arm, his brain telegraphing frantic messages to limbs that couldn
'
t or wouldn
'
t respond, but there was nothing.  No pain.  No sensation at all.  Only the hollow ring of his thoughts as he floated through the darkness
—
adrift in a syncopated sea.  He tried to remember where he was, who he was, but his mind stubbornly remained blank.  He concentrated harder, and then harder still.  Pain broke through the dark, hot and crimson.  Unbearable.

Panic rose, the cacophony of sensation almost unbearable.  He fought against his fear, sinking back into the soothing sound of the mechanical music, the pain receding with each throbbing beat.

The rhythm was familiar, but he couldn't quite place it.  He struggled for memory, but there was only blackness.  God, what he wouldn
'
t give for light.  The darkness was claustrophobic, closing around him like velvet, filling his eyes and his mouth
—
smothering him in softness.

As if in answer to his prayer, a flare of light pierced the darkness, its brilliance almost blinding.  The automated cadence faded as he concentrated on the resplendence.  Slowly it widened until it resembled a luminous doorway and he felt himself being drawn forward, its cool beacon, compelling him onward, fear fading in its wake.

The noise intervened, pulling him back, the light disappearing as suddenly as it had come.  Frustrated, he tried anxiously to see something in the darkness.  Anything.  But there was nothing, only endless black and the pulsing rhythm.

Mentally, at least, he closed his eyes, trying to imagine color and texture where there was none.  To shut out the darkness and recapture the light.  It began as a pinpoint, growing steadily larger, until the doorway reappeared, this time in glorious color.

He could see through it now.  Greens and blues and yellows.  So bright it almost hurt his eyes.  The light grew larger, embracing him, surrounding him, his senses springing to life.  There was grass, silky and soft beneath his cheek, and sky
,
azure blue, dotted with wisps of cloud.

Wind kissed his cheek, crisp and cold, and in the distance, he could hear the bubbling of a small stream, its musical sound blessedly devoid of rhythm.

Sighing with relief, certain that the nightmare had ended, he rolled onto his side, the warmth of the sun lulling him into sleep.

"
Hold your tongue.
"
Marjory Macpherson shot a look at the door to the solar, expecting the worst.  When the shadows remained unchanged, she allowed herself to breathe, but still kept her voice a whisper.
"
The walls have ears, and well you know it.
"

"
Allen is far into his cups by now.
"
Fingal worked to speak softly, but the resulting growl carried easily across the room.  Her captain was not a subtle man, preferring confrontation to diplomacy no matter the cost.
"
He
'
ll no
'
act until his father arrives.
"

"
Then we canna wait that long.
"
Marjory crossed her arms with a firmness she didn
'
t feel, but there was no time for hesitating.  Torcall Cameron would arrive before the next se
'
nnight, and she intended to be ready.
"
You
'
re certain Ewen
'
s dead.
"

"
I saw it with my own eyes.
"
Fingal frowned.
"
There was a rockslide.  The entire cliff collapsed.  Before I could reach him, he was gone.  No one could have survived.
"

The two brothers had gone hunting, Fingal accompanying them to make certain that it was game they sought, and naught else.

"
He
'
d gone ahead, around the bend.  By the time he got back it was all over.
"
Fingal tightened his hand on the dirk at his waist.
"
He blamed me.  But there were witnesses, some of his own men.  It took some convincing, but eventually he backed down.
"

"
For now.
"
Marjory exhaled slowly, her brain still trying to grasp the concept that her husband was dead.
"
Once his father arrives, there will be more accusations.
"

"
Then they
'
ll come to naught.  Make no mistake, were it no
'
for your grandfather, I would have cheerfully skewered the man long before now, but the rockslide was an accident.
"

"
How many Camerons are within our walls?
"
Since the marriage, despite her protest, Torcall had insisted upon leaving a force of his men at Crannag Mhór.  Most times they numbered less than her own clan, but with the recent return of Ewen there were more.

"
No more than fifty.
"
Fingal scratched his chin in thought.
"
But Torcall will bring more. And even were we to be matched in number, there
'
s the question of age.  Torcall
'
s kin are young and well trained.
"