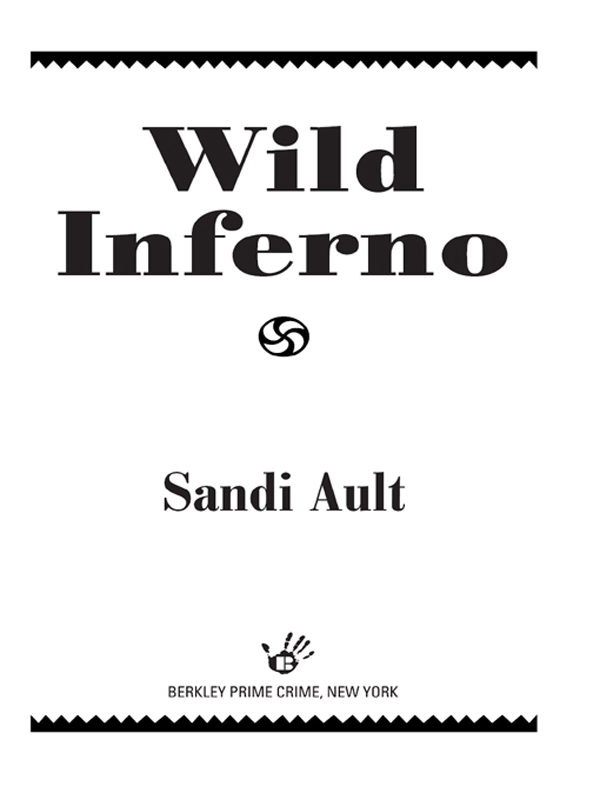 All rights reserved.
No part of this book may be reproduced, scanned, or distributed in any printed or electronic form without permission. Please do not participate in or encourage piracy of copyrighted materials in violation of the author's rights. Purchase only authorized editions.
The name BERKLEY PRIME CRIME and the BERKLEY PRIME CRIME design are trademarks belonging to Penguin Group (USA) Inc.

A fiery, spirited woman,
beautiful, strong, wise, and good.
Everything I always wanted to be.

11
The Story of Two Brothers

23
Scene of the Crime

26
The Long Way Around

29
Coyote and the Desert's Blanket

37
The Quick Way Down

38
This Side of Hell

A community that has been threatened by wildfire will forever mark time against that event. If there was victory, it will always be celebrated as their moment of triumph. If there was devastation, it will ever be their scar to bear. In the course of a few hours to a few weeks, the present and future of an area and its citizens can be completely altered.

Wildland firefighters have one thing in common: a zeal for the taste of danger, for pitting their skills and courage against a terrible and deadly foe. There are heroes. And sometimes there are martyrs. For the firefighters, the pace and the power to change lives and landscapes is a heady drug. Most firefighters come from government jobs where little changes from day to day through the course of an entire career. But a wildfire offers the opportunity to accomplish something life transformingâoften in as little as two weeks.

This is a work of fiction, and the characters and events herein are figments of my imagination. However, I have taken some license in placing this story over the backdrop of a real landscape and a very real phenomenon known as the Lunar Standstill. I have also alluded to some real myths, traditions, and rituals from several Native American culturesâhowever, out of respect for their right to keep and to define their own culture, I have mixed and changed these myths and rituals and created some fictitious ones.

Time before time, the chiefs in the Center of the World could talk with fire and receive its knowledge and power. They used what fire told them to hold the moon unmoving in the sky.

â
From an old Pueblo story

In his last conscious moment, the burning man spoke three words. I got there just in time to hear them.

It was mid-July. High temperatures and months of drought had parched southern Colorado. For days, waves of dry storms had pounded the peaks and mesas with lightning, sparking dozens of wildfires. Local crews were unable to respond to all the smoke reports. One small fire smoldered in a remote part of the Southern Ute Reservation. As soon as the Three-Pueblos Hot Shots got there, they were sent in to quell the blaze.

But high winds had driven the flames of the fire up into a huge convection shaft, surging with sparks, embers, and smoke. Airborne incendiaries rocketed across the hotshots' burned-out buffer lines and colonized dozens of new spot fires in the adjacent patchwork of national forest, private property, and Indian lands. The head of the Chimney Rock Fire began to expand on two sides. The northern lip advanced rapidly, sending flaming emissaries across narrow washes. On the eastern front, embers caromed across rocky outcroppings and erupted into a maze of arroyos, each of these drainages a potential new head for the fire and a perfect chute to feed the flames up the steeply escalating, heavily forested slopes to the national historic site known as Chimney Rock.

When I arrived, my first order of business was to find an old manâa Ute known as Grampa Ned, who had reportedly snuck around barricades and entered an area to one side of the fire. My name is Jamaica Wild. I work for the Bureau of Land Management, and I was the liaison officer for the team that had been called in to take over the fire's management.

At the staging area, Bob Pinsler, the acting incident commander from the local agency, helped me pinpoint Grampa Ned's last known location on a map. “A woman from the Ute tribe saw him go down this dirt road toward that old mine. You flag the turns you take, and don't get off the road. If you don't see him, come on back out.”

I pulled onto the highway, drove a mile to the east, and turned left onto a gravel track, skirting the barricades. Torn yellow caution tape fluttered in the wind. An orange cone lay smashed in the center of the path. I swerved around it and went on. A sign at the bridge crossing Stollsteimer Creek warned:

S
OUTHERN
U
TE
I
NDIAN
L
AND

“Not today,” I muttered as I drove past it. “A fire doesn't care who owns the land.” As I crossed the bridge, the twin spires of Chimney Rock loomed high above me, topping a narrow, rising ridge. To the west, a roiling cloud of thick gray smoke engulfed the sky.

At a fork in the road, I turned left, and the path played out at the entrance to the abandoned mine. No sign of anyone nearby. I turned and followed the road back, taking the other fork, and stopped to tie pink flagging to a tree. I followed this track for a quarter mile until it, too, gave out. But this time there was a white pickup parked on one side, its tailgate down. I plowed to the end of the gravel, hooked a U-turn, facing my Jeep out in case I needed to make a quick exit. I got out and crossed the road, checked out the white pickup. The truck was unlocked, the windows down, the seat and floor littered with empty cigarette packs and candy wrappers.

Looking around, I noticed a footpath leading up through the pines. I yelled up the path, “Hello? Grampa Ned? Ned Spotted Cloud? Are you up there?”

You're not going to make this easy for me, are you, Grampa?
I opened the rear hatch of my Jeep, snatched my helmet and shoved it on my head, grabbed my fire line pack and strapped it on. Then I pulled on my gloves and tied a tail of pink flagging to a pine branch at the head of the path, went twenty yards into the forest, and flagged the trail again. I took my radio off scan, dialed to tactical channel 1, and opened the mic. “Liaison Wild to Command,” I said.

“Update: there's a white pickup at the end of the east leg of the fork in the road. Unable to locate driver. Heading up a trail now a little wayâI think he might be up here.”

“You're breaking up. Request repeat.”

I hiked upward, breathing harder with the exertion of the climb as I talked. “Update: I'mâ”

“I'm heading up a path at the end of the road.”

I stopped again to tie flagging to a tree, then examined the radio. There was no response to my latest transmission. I flipped the switch to scan. It squawked with static and traffic. Terse voices demanded weather updates, GPS coordinates. Bits of bad news competed with attempts to exact order and discipline:
â¦winds picking upâ¦strong southwesterly gusts expectedâ¦try to get air support from Durangoâ¦
It squealed, clicked several times
â¦
and then nothing.

I turned the set off then on again as I kept moving. A few spurts of static followed by silence. I heard a low, throbbing drone, like thunder rumbling in the distance. The smell of smoke was strong, the air was murky. I glanced up the trail ahead of me and hesitated. The radio crackled: “â¦ckâ¦ckâ¦Liaisonâ¦ckâ¦?”

The rumbling sound grew louder, and the air felt unbearably heavy, as if the sky were sinking, the cloud of smoke collapsing downward, pressing the oxygen out of the atmosphere.
Not good,
I told myself.
This is not good!

I pressed the mic again. “Wild to Command,” I said. “I haven't found the party yet, but I think I better get out of here.”

Then to one side of me an explosion detonated, a tumult that hit me with a blast and made me feel as if my chest would cave. My ears rang, I was stunned. But in an instant, I could hear the fire roaring, ripping the earth openâa noise so great that my whole body trembled like a tuning fork. Adrenaline spurted into my bloodstream, and I broke into a fast run. I heard cracking limbs. A wall of heat and pressure pushed me down the trail. My legs burned from exertion, my ankles and knees rang with the impact as they jarred against rocks and roots. My fire shelter banged hard against my behind, smacking me with every stride. The weight of my pack bounced on the wide belt at my waist as I loped forward, wondering as I went whether I would have to deploy my shelter. Could I survive a burnover? My lungs ached from lack of oxygen. It seemed there was none in the air around me.

As I reached my second flag, hope gave me new speed and vigorâjust twenty more yards and I could jump in my Jeep and drive!

But as I neared the end of the trail, a sound like a cannon shot made me start, and a huge limb thundered to the ground in front of me, knocking me down. I heard a thousand firecrackers going off at once as the canopy above lit up with red light. Flames devoured the treetops and the boughs began snapping and falling around me. A cloud of smoke and ash engulfed me.

I staggered to my feet and pulled the bandana at my neck over my nose and mouth. In the haze, I saw a flash of color at the head of the trailâa yellow shirt, someone moving. I willed my legs to run the rest of the way to the road.

At the trailhead, a tall firefighter stood, back to me, smoldering, a cloud of steam encircling his body like a halo, his pack and fire tool in a heap on the road beside him. He began wavering, obviously about to collapse. I ran to him and grabbed him from behind. Heat surged from his body, and I felt as if I'd just embraced an enormous burning log. “Get in the Jeep,” I screamed, but he couldn't hear meâthe din of the fire's consumption threatened to blow out my own eardrums.

I tried to walk him the few steps to the back of the car, but he stumbled, off balance, and I tripped as he fell onto the rear deck, where I'd left the hatch open. A flaming branch dropped onto the back of my leg, and I kicked it to one side. I put a knee up on the deck and felt his neck for a pulseâweak, thready. His face above his bandana was blistered and red. His eyes were clouded over, the lashes burned off, and the skin was starting to pull away.

“We've got to get out of here,” I yelled. “Can you hear me?” I tugged at the bandana that covered most of his face.

His gloved hand caught my wrist as I pulled the cloth away. Scorched, cracked lips parted, and he tried to swallow. His grip on my arm tightened with urgency. “Save the grandmother,” he sputtered. And then he closed his eyes.