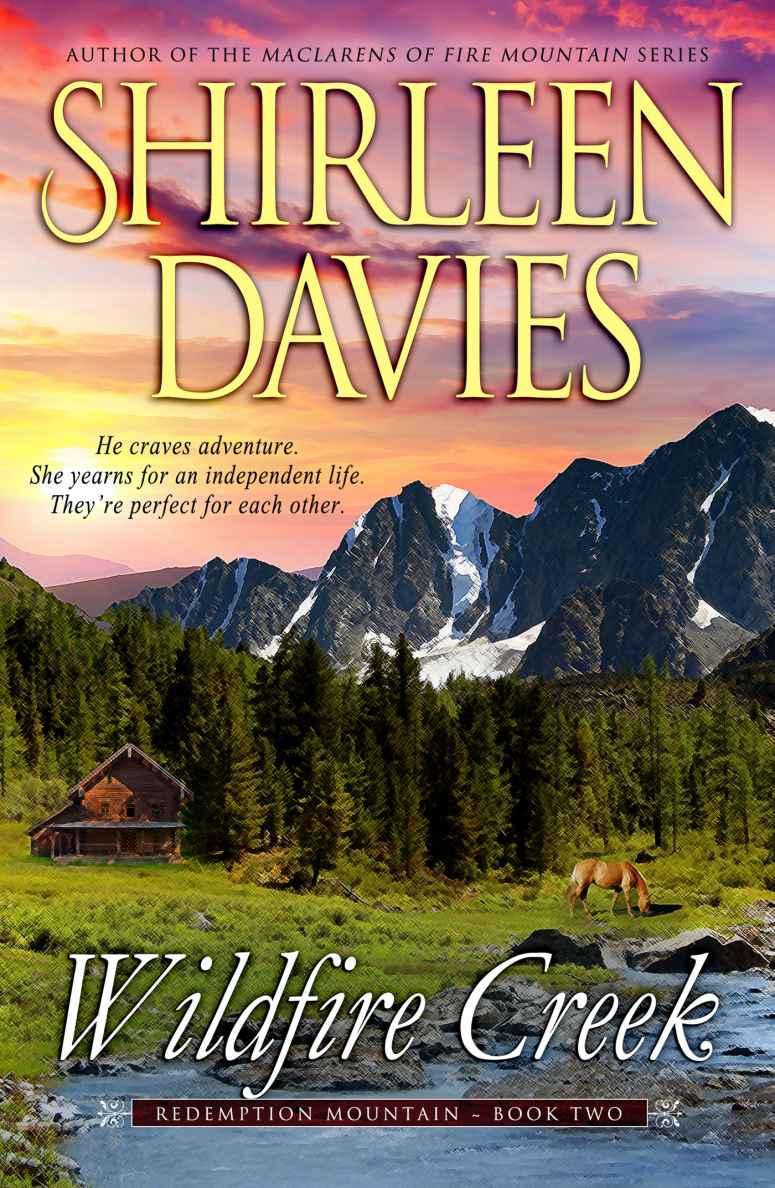 Tougher than the Rest, Book One

Faster than the Rest, Book Two

Harder than the Rest, Book Three

Stronger than the Rest, Book Four

Deadlier than the Rest, Book Five

Wilder than the Rest, Book Six

All Your Nights, Book Four

Book Two in the Redemption Mountain

Wildfire Creek is a work of fiction. Names, characters, places, and incidents are either products of the author’s imagination or used facetiously. Any resemblance to actual events, locales, or persons, living or dead, is wholly coincidental.

Book design and conversions by Joseph Murray at
3rdplanetpublishing.com

I care about quality, so if you find something in error, please contact me via email at [email protected]

“A passionate story of rebuilding lives, working to find a place in the wild frontier, and building new lives in the years following the American Civil War. A rugged, heartwarming story of choices and love in the continuing saga of Redemption Mountain.”

Luke Pelletier
is settling into his new life as a rancher and occasional Pinkerton Agent, leaving his past as an ex-Confederate major and Texas Ranger far behind. He wants nothing more than to work the ranch, charm the ladies, and live a life of carefree bachelorhood.

Ginny Sorensen
has accepted her responsibility as the sole provider for herself and her younger sister. The desire to continue their journey to Oregon is crushed when the need for food and shelter keeps them in the growing frontier town of Splendor, Montana, forcing Ginny to accept work as a server in the local saloon.

Luke has never met a woman as lovely and unspoiled as Ginny. He longs to know her, yet fears his wild ways and unsettled nature aren’t what she deserves. She’s a girl you marry, but that is nowhere in Luke’s plans.

Complicating their tenuous friendship, a twist in circumstances forces Ginny closer to the man she most wants to avoid—the man who can destroy her dreams, and who’s captured her heart.

Believing his bachelor status firm, Luke moves from danger to adventure, never dreaming each step he takes brings him closer to his true destiny and a life much different from what he imagines.

This book is dedicated to my wonderful readers and fans who continue to encourage me with their amazing support. They inspire me and keep the energy flowing. Thanks so much!

Thanks also to my editor, Kim Young, proofreader, Alicia Carmical, and all of my beta readers. Their insights and suggestions are greatly appreciated.

As always, many thanks to my wonderful resources, including Diane Lebow, who has been a whiz at guiding my social media endeavors, my cover designer, Kim Killion, and Joseph Murray who is a whiz at formatting my books for both print and electronic versions.

Other Books by Shirleen Davies

“What do you see?” Luke Pelletier held his position as Dutch McFarlin peeked over the edge of the window, watching and listening to the conversation taking place inside.

Dutch had been with the Pinkerton Detective Agency for well over a year, while Luke had been recruited a month before. It was supposed to be one quick job—in and out. Weeks later, Luke found himself embroiled in a string of events, which threatened to go on for months if he and his partner didn’t end it tonight.

“The man I believe to be Flatnose and at least ten of his men,” Dutch hissed, trying to keep his voice low. They’d followed the outlaw to the remote hideout after a tip from a member of the local vigilante committee or, as they preferred to call themselves, the citizens committee.

Flatnose and his men were suspected of robbing a series of gold transport wagons, stealing the treasure, and killing anyone who resisted. The death count stood at two confirmed. The trouble was no one had any firm proof Flatnose’s gang was behind any of the crimes—and no one could identify the man. The outlaws had been careful to hide their faces behind bandanas and hats pulled low across their foreheads. The only clue to his identity had been a slip by one of his men during a holdup. A guard swore he heard the man call their leader Flatnose.

The good people of Bison City established the citizens committee after the killing of the two guards. It hadn’t taken them long to hire the Pinkerton Agency. Dutch arrived a couple weeks before Luke, contacting his friend when it appeared a second agent would be needed and Pinkerton had no one available to send. In truth, Luke had jumped at the chance to get away from the ranch and give his brother, Dax, and new wife, Rachel, some privacy. Besides, Luke needed time to figure out his own future.

If they could find the proof, Luke would be on the road back to his ranch in Montana tomorrow, ending his relationship with Allan Pinkerton and his illustrious agency, at least for the moment.

“Damn,” Dutch murmured and dropped down, scooting behind some bushes as two men stepped onto the porch. Dutch recognized Flatnose Darvis from a game of cards at a Bison City saloon. He heard Flatnose had earned his nickname during a fight when his opponent slammed a shovel into his face. Dutch didn’t recognize the second man, who reached into a pocket, pulled out a slim cheroot and lit it, blowing the smoke out in a long stream.

“The committee has hired someone from Pinkerton’s to find out who’s behind the robberies,” the man standing next to Flatnose said. No one knew him by his real name, Frederick Marlowe, or his connection to Flatnose. Few knew he and Darvis were equal partners, and no one, except Flatnose, knew his last name. The men called him Rick.

“Where’d you hear that?” Flatnose asked, turning toward the man and lighting his own cigar.

“The mayor’s daughter,” Rick answered, recalling how easy it had been to flatter the information out of the naïve young woman. “She said they believe a gang, led by a man named Flatnose, was behind the thefts.”

Flatnose let out a string of curses before taking a deep draw from his cigar.

“We should head back to Montana. There’s more gold to be had closer to home, without the interference of the Pinkerton men.” Rick didn’t mention Star Ranch, even though both knew that’s where he wanted to go. The property consisted of several hundred acres he and Flatnose purchased after Rick’s brief term as a lawman in the Dakota Territory. He’d learned a lot in the job and applied much of it to the robberies they pulled afterwards.

Flatnose looked out over the thick pine forest, finished his cigar, and ground it out under his boot. “Tell the boys we’ll leave at first light.”

Dutch moved further toward the back of the cabin, where Luke covered a second entrance. He’d heard enough to believe Flatnose and his men were who they sought, but not enough to convict them. They’d need to find the gold or have one of the men confess.

“What now?” Luke asked as Dutch crouched next to him.

Dutch pulled out his pocket watch. “We’ve got six hours until daylight. That’s when they plan to ride out to Montana.”

“Not much time to get what we need.” Luke pushed his hat further back on his head. “If they’re leaving, the gold’s got to be here. We need to catch them with it before they ride out.”

“You know, the odds are in their favor—twelve to two.” Dutch felt the need to point out the obvious since he’d been the one to get Luke involved. Luke and Dutch had served together in the Confederate Army, both ending up in the Confederate Secret Service Bureau, a covert group made up of men and women from the military as well as private citizens.

“We’ve got four, maybe five hours before they make their move. We have two choices—ride back to Bison City to gather more men, or stay here and handle it our way.”

“Have we ever faced odds like this before?” Luke asked.

Luke pulled off his hat, speared his fingers through his dark auburn hair, and flashed a grin at Dutch. “Guess it’s time we did. What’s life without a little adventure?”

“Not worth living, in my opinion.” Dutch smiled back. He checked his revolver, confirming it was loaded, then checked his second gun before picking up the Spencer repeating rifle he’d hidden a few feet away. “What’s the plan?”