Read Will Work For Love Online 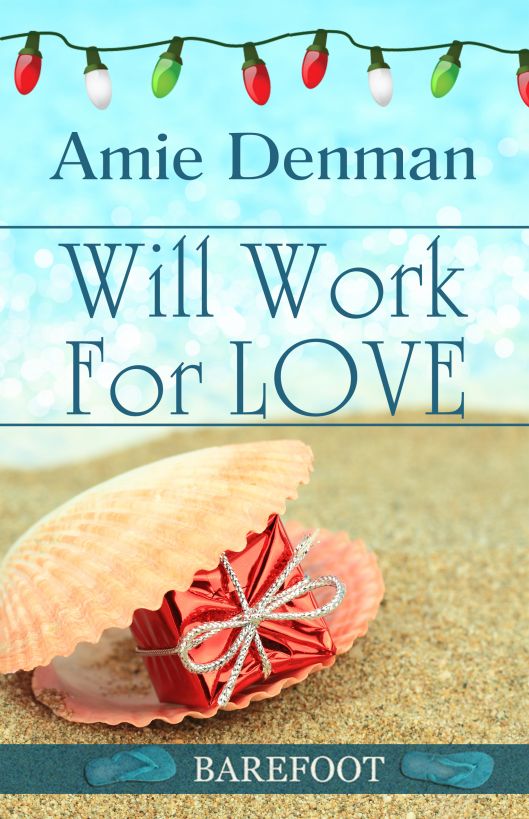 This ebook is licensed for your personal
enjoyment only. This ebook may not be re-sold or given away to
other people. If you would like to share this book with another
person, please purchase an additional copy for each person. If
you’re reading this book and did not purchase it, or it was not
purchased for your use only, then please return to Smashwords.com
and purchase your own copy. Thank you for respecting the hard work
of this author.

Warning: All rights reserved. The
unauthorized reproduction or distribution of this copyrighted work,
in whole or part, in any form by any electronic, mechanical, or
other means, is illegal and forbidden, without the written
permission of the publisher, Turquoise Morning Press.

This is a work of fiction. Characters,
settings, names, and occurrences are a product of the author's
imagination and bear no resemblance to any actual person, living or
dead, places or settings, and/or occurrences. Any incidences of
resemblance are purely coincidental.

When Hurricane Destiny sweeps across the
island of St. Thomas in September, the East family isn’t worried
about their vacation home. After all, a property management company
handles insurance and repairs. Just to be sure, though, they send
maid of honor Whitney Oliver to St. Thomas for a two-week vacation
just prior to the Christmas Eve wedding of their daughter
Taylor.

Instead of a tropical vacation, Whitney finds
an estate heavily damaged and untouched by the contractor who
cashed the checks. With only two weeks to pull the venue together
for a wedding in paradise, she accepts the help of a sexy islander
with an amazing skill for construction. Chris Maxwell, owner of
Blue Isle Construction, is blown away by Whitney the moment she
arrives on the island. Putting the East family estate together
board by board is the only thing he can do to help Whitney—and
himself.

Working side by side and day and night by the
sparkling blue water’s edge, Whitney and Chris fall hard for each
other. Hurricane Destiny brought them together, but will secrets
surrounding Chris’ construction company tear them apart?

Brilliant pink and coral streaked the evening sky
outside the windows of the small aircraft. With a rush of relief,
Whitney Oliver watched the line of passengers ahead of her shuffle
toward the open door. Warm island breezes and sea air wafted toward
her down the narrow aisle.

A man at the bottom of the metal steps pointed the
passengers toward the small building to retrieve their luggage and
get island transportation.

“Vacationing alone?” he asked, his sun-browned face
wrinkling into a friendly smile.

It felt like a vacation as she crossed the tarmac at
the tiny airport. She paused outside the doors of the small
building where the man directed the passengers. The warm evening
air and ocean smell were a sharp contrast from cold wintry Boston.
Whitney didn’t want to go into the airport building quite yet. She
pulled her cell phone from her purse and called Taylor.

“Did you make it okay?” her friend asked as soon as
she picked up.

“And how is…did you see any damage?” Taylor paused.
“Is everything okay?”

Whitney laughed. “I haven’t seen your estate yet,
but stop worrying. You think about your fiancé and that tiny baby.
I’ll get everything ready for your wedding.”

“You’re the best maid of honor in the world.”

“I know. Enduring two weeks at an estate on a
tropical island…it’s going to be rough.”

“Call me every day,” Taylor laughed, “or I’ll think
you ran off with a hot islander.”

“Right. Then I’ll be the one having a shotgun
wedding next Christmas Eve.”

“Do you think my father will bring a shotgun?”

“Your father would make his chauffeur carry it,”
Whitney said. “And he couldn’t be happier about your wedding.”

Christmas music—tropical style with steel drums and
a reggae undertone—played in the lobby as Whitney searched the
luggage pile for her large red suitcase. It was stuffed full and
embroidered with the name of her company,
OutWhit
Outplay
Sportswear,
in looping white letters. She flipped the suitcase
onto its wheels and headed toward the revolving door next to a sign
advertising rental cars just outside.

She approached the revolving door and stepped
briskly into it, expecting her suitcase to roll behind her
obediently. Chronic over-packing finally caught up with her,
though, and her overstuffed red suitcase got firmly sandwiched in
the door. The whole revolving door ground to a stop and refused to
move even an inch.

She dug in her heels and pushed harder. Several
people waiting to either enter or leave the lobby looked at her
curiously but without a whole lot of sympathy. They were probably
thinking a girl with a suitcase of that size should never have
attempted the revolving door.

Whitney tried a new tactic. She braced herself
firmly against the inside of her glass triangle and put one foot on
her suitcase. If she could shove it backward out of the door, she
might get the whole thing moving again. A small bead of sweat
rolled down the back of her neck. An entranced crowd of people
gathered to watch the lady with the red suitcase fight the
revolving door for freedom.

“It’s not working,” Whitney said aloud. She noticed
that not one of the many fascinated tourists in the airport was
doing a thing.
They are going to stand there and watch me die in
this damn door
, she thought, as she planted both feet against
the side of her suitcase and shoved as hard as she could.

Again, nothing. Whitney lowered to the floor and
closed her eyes.
Some maid of honor I am. I’ll still be stuck in
this damn revolving door in two weeks as my best friend sways down
the aisle on her parents’ estate. Taylor deserves better than this.
Deserves a friend who would finalize her wedding plans and not get
stuck in a door at the airport, trapped forever to endure a
horrible death by the weight of her own luggage
.

Her feet were still propped against her suitcase
when, miraculously, she felt it start to slide. She opened her eyes
and looked into a set of blue eyes the exact color of the tropical
waters she’d just flown over. Had death come quickly, floating her
toward heaven on a wave of sparkling water? The blue eyes belonged
to a guardian angel who was going to free her from her
sweat-drenched body and the burden of her earthly possessions in an
awkward red suitcase now missing one-half of a zipper.

“You might want to get up,” the angel said.

Whitney had never actually seen an angel, but she
was pretty sure that a seraph wouldn’t have a jaunty scar over one
eye, dark blond hair a touch too long, a rakish grin, and shoulders
wide enough to shoulder all her earthly burdens. Of course, this
angel came with a big benefit. He was bracing those broad shoulders
in the door and dragging her suitcase out the opening. One giant
tug and the suitcase surrendered to the tall blond man. The door
swung freely, and Whitney sprang to her feet. In one fluid
movement, she swept out into the warm tropical air.

The man balanced her suitcase on one shoulder and
stood on the pavement outside the door staring at her.
He moves
fast
. Whitney took a deep steadying breath of the fragrant
island air.

She must be a heck of a sight. Her long brown hair
was tamed into neat waves when she left Boston that morning, but a
lengthy layover in Atlanta and her epic battle with the door
encouraged a chunk of half-grown-out bangs to sweep across her
face. A white T-shirt with her company logo silkscreened in fading
navy blue letters from her stock of second-string shirts. And tan
linen pants. A wrinkled mess.

Despite the way she looked, the man who loomed with
her suitcase looked her over from head to toe with obvious
approval. Was it the bangs occluding her vision in one eye or did
he start over with a second full-body look? His square-jawed grin
was impossible to resist, especially when it lit up those tropical
blue eyes, now looking straight into hers.

“Same thing happened to me last week,” he said.
“Lucky for me, there was a clown convention on the island and
everyone just thought I was part of the show.”

Whitney flashed him the full force of her smile. “Do
you suppose any of those tourists think I’m just live
entertainment?”

“Sorry.” He shook his head. “Your performance was
too convincing to be anything but the real thing.”

“Chris,” he said as he took her extended hand.

Maybe it was the glow of the sunset, the smooth
island air, and the joy of being free of the door, but Whitney was
sure she felt the slight tinkle of fairy dust when his large hand
enclosed hers. Like that moment at Disney World when the fireworks
explode over the castle and everyone believes in magic for a few
seconds.

“Welcome to St. Thomas,” he said, still holding her
hand.

“Yep. Can I give you a ride?” he asked with one
eyebrow and one corner of his mouth raised just enough to imply
there was a little more to his question.

“I have a rental car reserved,” she said, “but
thanks for the offer.”

He nodded. “This way,” he said as he took her hand
again and led her down the sidewalk which ran along the front of
the airport. He carried her heavy suitcase easily on his shoulder.
She wondered why he didn’t roll it behind him, but he seemed like
the kind of man who did things his own way. He was nearly a foot
taller than she was, and she had to hurry to keep up.

He stopped in front of the one and only rental
agency with an open sign.

The clerk scanned his computer screen and hesitated.
Adjusted his glasses and rubbed his jaw, eyes darting from the
computer screen to an open register book and back. Chris towered
next to her, still holding her suitcase.

The clerk’s face brightened. “Here it is. Black
Jeep. Two week rental.” Business or pleasure?” the clerk asked,
handing over the keys. The kind of question he asked everyone
without any expectation of getting an interesting answer.

A smile lit up the young clerk’s face and he glanced
from Chris to Whitney. “Congratulations!” he said.

“Oh, we’re not—” Whitney began, but Chris
interrupted her.

“Thanks,” he said as he took the keys the clerk
shoved across the small desk. Chris pocketed the keys and took her
hand. He started across the parking lot to the only black Jeep.
When they got to the car, he unlocked it, put her suitcase in the
back, and silently handed her the keys.

“Thanks,” she said automatically and then realized
her mistake. “I mean…”

She wanted to tell him she wasn’t getting married
and she’d be happy to ride off into the approaching sunset with him
if he’d just get in the Jeep. The way he looked leaning on the side
of the car with one arm propped way over her head, she figured
she’d even let him drive despite what the rental agreement said. He
looked at least twenty-five. Probably even had car insurance. Yep,
he could drive her car any time he wanted to.

Instead she just stood there looking at him and
wondering how a day that started at the sedate Boston airport could
evolve into this—standing in a parking lot at sunset with an
incredibly handsome stranger congratulating her on her upcoming
imaginary wedding.