Read Windcatcher: Book I of the Stone War Chronicles Online

Windcatcher: Book I of the Stone War Chronicles 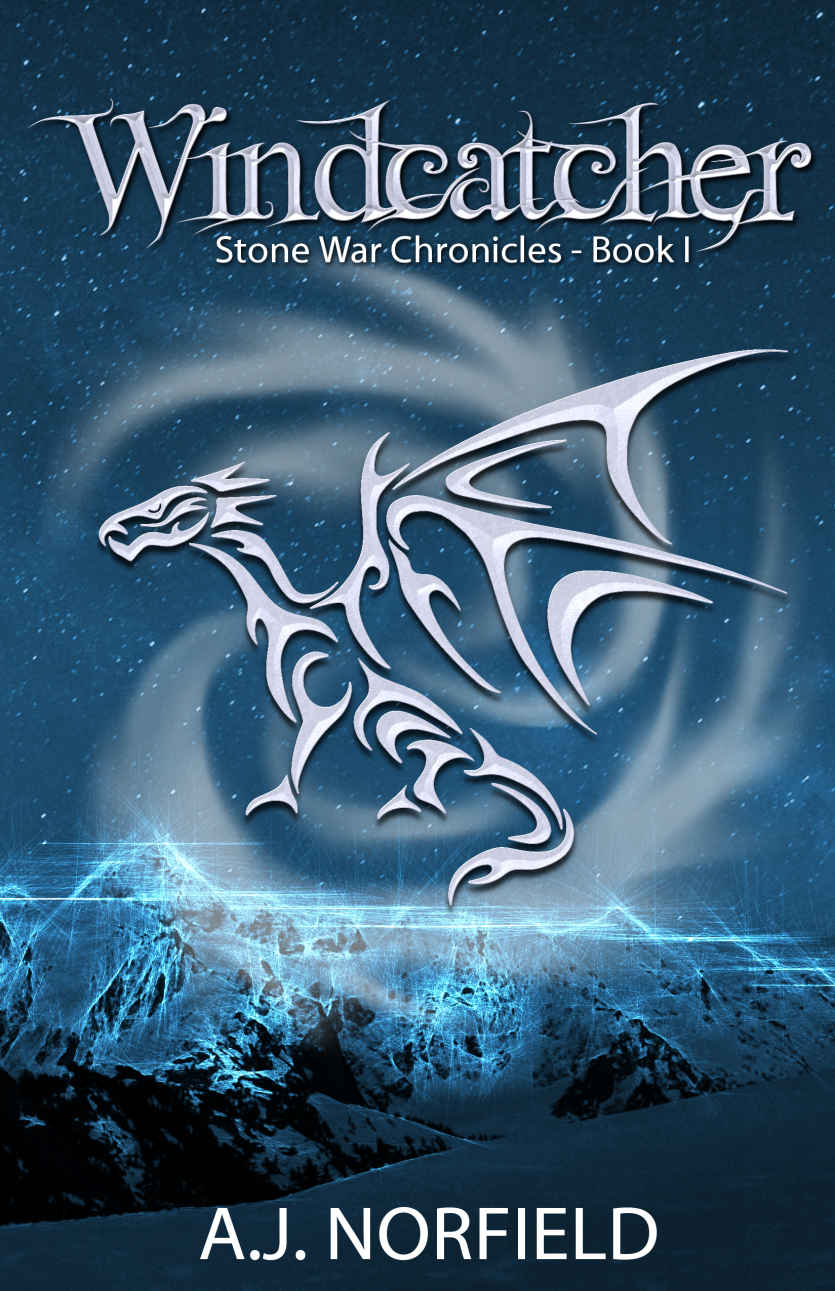 Book I of the Stone War Chronicles

All rights reserved. No part of this book may be reproduced, stored, or transmitted by any means—whether auditory, graphic, mechanical, or electronic—without written permission of both publisher and author, except in the case of brief excerpts used in critical articles and reviews. Unauthorized reproduction of any part of this work is illegal and is punishable by law.

This is a work of fiction. Names, characters, places and incidents are a product of the author's imagination. Any resemblance to actual people, living or dead, or to businesses, companies, events, institutions, or locales is completely coincidental.

For my
two
greatest—and most wonderful—distractions in the world and she who takes care of them.

The morning felt brisk. Lai’Ping felt the cold in his joints; but, then again, he always had trouble feeling warm nowadays. His joints were old, held together by old muscles. His head, cleanly shaved, felt the soft morning wind. His only facial hair was a long beard—pure, white, and flaxen. Long ago, he had accepted his life now moved at a much slower pace than most of the younger men in the monastery.

Looking out into the garden from his seat of meditation, he slowly drew in his breath. The garden had a certain magical feel to it this in the day. The sun’s first light just crept over the garden wall. Small drops of last night’s rain sparkled in the light, as they lingered on the bamboo leaves at the far side of the courtyard.

Behind the wall, the white tops of the impressive mountain range bathed in the sun’s warm rays that slid further and further down the mountain slopes. But the snow would not melt this early in spring. The forest’s inhabitants on the mountain-side would soon wake up, birds already sang their songs to greet the morning, while all kinds of scurrying animals began their busy days.

The monastery had low, white walls on this side. On top of the walls, a small, black roof mirrored the other roofing of the monastery. Instead of running straight, they all curled upward at the end. Most were decorated with small swirls and globes, which even Lai’Ping—at times—found too much. In his long life, he had learned to keep things simple, without too much distraction. It left the focus on the things in life that were more important…like family. He felt his mind wander, thinking about how his only granddaughter was doing. The faintest of smiles was seen, before he gently pushed the thought out and emptied his head again, like the masters before him had so often instructed…of course, now
he
was the master.

Never too old to learn.

Being located on the top of a high mountain slope, the back side of the monastery had no need for high walls as the ground behind those walls disappeared in a straight drop down about half the length of the mountain itself. Because of this, the monastery had been designed in such a way that the back courtyards and gardens were almost one with the panoramic view of the high mountain ranges.

The largest part of the central building consisted of the great hall, in which the monks would gather to meditate. Around it, there were dozens of little corridors leading to smaller rooms. Some were used for more secluded meditation sessions, others were the private living quarters of monks. However, most lived in the main resident buildings on the far south side of the monastery’s main courtyard. Wooden statues and images of grand dragons decorated the walls and pillars of the meditation area. Often just the head or the talon of these magnificent creatures was displayed; yet, at other times, the entire dragon curled around a pillar, carved in full detail with scales, legs and wings.

It seemed exaggerated to Lai’Ping, but it was their connection to the past. It was said these mythical creatures once shared their wisdom with the monks. He often meditated on the question of what had happened to make them disappear over two centuries ago. Enlightenment had unfortunately never been provided, as the question still remained unanswered after all these years.

Behind the great hall were buildings where only the inner circle of grand monks were allowed to venture. Called the Inner Sanctum, it housed the Empire’s most sacred item—the relic which the monastery had the honor of protecting for the past centuries.

A thick, wooden, double door blocked the entrance to this holy place. Each door was so large and heavy it required four people to open it when one needed to pass through it. The gateway displayed a magnificent carving of two dragons that mirrored each other. Their front talons and noses touched where the doors met. Despite the majestic feel of the carvings, Lai’Ping always thought the dragons seemed to be joined together in an awkward human-like courtship dance. Behind those doors was the long road of scales—a hallway with a floor completely covered in the scales of dragons of old, one for each dragon said to have helped make the monastery possible. The road of scales had guards stationed in its hallways at all times.

The main courtyard at the entrance of the monastery could easily hold a thousand monks at once. It often did, as the monks all trained in the arts of the dragon’s claw style of fighting. In comparison to the low walls surrounding Lai’Ping’s private meditation garden, this main courtyard was surrounded by massive walls, each many times taller than a man. These giant walls held the main gate to the monastery, whose height rivaled the size of the walls. Special mechanisms with ropes and multiple gears made it possible to open such massive doors, as no man would have the power to open them by hand.

Lai’Ping grabbed his leg to unfold himself, and slid to the side of his meditation cushion. It had been a long time since he actively participated in the morning exercises. Cautiously, he stood up, making sure his legs would not give way under him. He vaguely heard the shouts and sounds of the monks training in the main courtyard. He shuffled slowly toward his private quarters, smiling softly at the joy that at least his hearing was not failing him yet.

Approaching the steps to his own accommodations in the monastery, he noticed one of the senior monks respectfully waiting for him. The senior monk sat quietly on his knees next to the thin sliding wall-panel that led into Lai’Ping’s high monk quarters.

Lai’Ping carefully moved up the steps toward the wooden walkway where the senior monk was seated. As the high monk reached the walkway, the senior monk bowed deeply to show his respect, and then slowly rose to his feet.

“To’Pal, how are you this morning?”

“I’m fine, Master Wén. There will be much to do today,” said the senior monk, as he produced a small scroll out of his sleeve. “Preparations for the royal visit are now fully underway.”

The royal visit normally came paired with thousands of common people traveling to the monastery to attend the ceremonial festivities. People brought rice and dried fruit from the year’s harvests as small offerings, prayed for a plentiful harvest season the next year and shared their abundance with dead relatives and friends to honor them. The monastery had to be in perfect shape before the Emperor arrived and walked through those large, main gates.

Every year the Emperor, accompanied by his wife, two sons and daughter, attended the sacred ceremony led by Lai’Ping. Thankfully, the top position of high monk was supported by the inner circle of grand monks, sixty-four in total. During the private ceremony, the Emperor prayed in the Inner Sanctum. He asked the sacred item stored there for its blessing and for its continued protection of the Tiankong Empire, like it had done for almost two hundred years now.

The Emperor’s visit was a little less than a month away now, just before the expected first snow. Lai’Ping looked at the small scroll in his hands, no doubt filled with the challenges of today which needed to be solved. But, as his fingers fiddled to open it, a loud crash and a rumble shook throughout the monastery.

Both men looked up in the direction of the main courtyard. Smoke was coming from behind the roof of his private chambers. Judging from the distance, it seemed to be near the main gate.

Shouts filled the air, and Lai’Ping heard people running on the wooden boardwalks around the buildings toward the main courtyard. He looked at the senior monk, silently hoping it was not a very bad accident, when he clearly heard heavy hoof-beats, nervous neighing horses and shouting war cries coming from the other side of the building. This was no accident…they were under attack!

Moving as fast as his old legs could carry him, Lai’Ping moved through multiple hallways, headed for the main hall. He had to get to the Inner Sanctum as quickly as possible. Smoke filled the small corridors. The walls were built of a thin, papery material which meant any fire would spread very swiftly. Lai’Ping kept his sleeve to his mouth and took a left turn with the senior monk hot on his heels. Behind him a heavy crash drew his attention. He saw one of the younger monks fly through a wall-panel. A massive black horse followed directly in his wake, driven by a black armored figure holding a thick spear. It happened in the blink of an eye; the horse crashed at full speed through the walls, like they were nothing but air.

As they continued on their way, they neared the end of the corridor which led to the main hall. Both men emerged close to the sanctuary doors. Lai’Ping heard more shouts coming from the main courtyard. Monks ran past with buckets of water, while others carried bladed staffs—the foundation of many of the dragon’s claw fighting techniques.

Lai’Ping and To’Pal, both heavily panting, exited the corridor bringing the main hall into full view. The smoke was less dense here, mainly because of the high ceiling. What the clear air revealed was a massacre and devastation. Dozens of monks lay dead, spread across the main hall. Some were pinned against the wall pierced by spears, while others just lay face down—or with heads twisted—on the floor in puddles of blood. The illustrations on the walls had smeared blood all over them, and a number of dragon statues were overturned, their pieces scattered across the ground.

Lai’Ping slowly walked around one of the main support pillars to get to the sanctum doors. As he did, a tall soldier in black armor came into view. The soldier stood in front of the sanctum doors, looking at them in deep thought.

These soldiers were clearly not from the Empire, their faces were too long and their eyes were too round. Their skin was so pale, it looked like they had never seen sun in this lifetime. So Lai’Ping spoke in the only foreign language that he knew, that of the mid-kingdom laying to the east.

“What is the meaning of this?”

The soldier slowly turned toward him and To’Pal and regarded them in silence. Lai’Ping met the soldier’s eyes as they calmly looked at him. The outsider started moving toward them.

“What are you doing here? Outsiders are not allowed to enter the Empire and these sacred grounds. You must leave at once!” said Lai’Ping sternly…but the man in front of them acted as if he heard nothing.