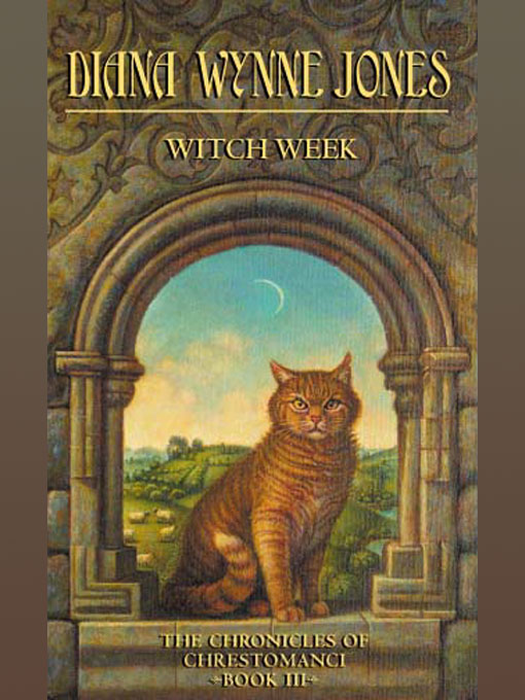 Note:
There are thousands of worlds, all different from ours.

1
T
HE NOTE SAID
:
SOMEONE IN THIS CLASS IS A WITCH.

2
T
HE NEXT DAY
was the day Miss Hodge tried to find out who had written the note.

3
T
HAT AFTERNOON,
Nan came into the classroom to find a broom laid across her desk.

4
A
T THE END OF LESSONS
, there was the usual stampede to be elsewhere.

5
C
HARLES HAD THOUGHT
, in the locker room, that he had been as frightened

6
C
HARLES GOT UP
. He remembered to put on his glasses.

7
B
REAKFAST WAS READY
before 6B had been called to find their shoes.

8
S
IMON ARRIVED LATE
for lessons. He had been making sure his heap of gold was safe.

9
T
HE OLD LAB
was not used for anything much except detention.

10
T
HE NEXT MORNING,
Brian Wentworth did not get up. Simon threw a pillow at him as he lay there,

11
C
HARLES JOGGED
around the playing field towards the groundsman’s hut.

12
A
DOG BARKED EXCITEDLY
up the hill. Everyone except the stranger jumped.

13
T
HE SCHOOL SECRETARY
dissolved into dither. She gushed. It was just as well.

14
M
R. WENTWORTH OPENED
the door and ushered the four of them into the classroom,

15
T
HE REST OF
6B shuffled slowly in and out of the study. Some came out white,

T
HERE ARE THOUSANDS
of worlds, all different from ours. Chrestomanci’s world is the one next door to us, and the difference here is that magic is as common as music is with us. It is full of people working magic—warlocks, witches, thaumaturges, sorcerers, fakirs, conjurors, hexers, magicians, mages, shamans, diviners and many more—from the lowest Certified witch right up to the most powerful of enchanters. Enchanters are strange as well as powerful. Their magic is different and stronger and many of them have more than one life.

Now, if someone did not control all these busy magic-users, ordinary people would have a horrible time and probably end up as slaves. So the government appoints the very strongest enchanter there is to make sure no one misuses magic. This enchanter has nine lives and is known as “the Chrestomanci.” You pronounce it KREST-OH-MAN-SEE. He has to have a strong personality as well as strong magic.

Late one night in 1605, a soldier named Guy Fawkes was caught with some two tons of gunpowder that he had smuggled into a cellar beneath the Houses of Parliament in London. Fawkes was arrested, tried, and executed for his part in the Gunpowder Plot—a failed conspiracy to blow up King James I and most of his government the very next day, November 5. Centuries later, English people still set off fireworks, light bonfires, and burn “Guys” in effigy to celebrate November 5 as Guy Fawkes Day.

T
HE NOTE SAID
:
SOMEONE IN THIS CLASS IS A WITCH.
It was written in capital letters in ordinary blue ballpoint, and it had appeared between two of the geography books Mr. Crossley was marking. Anyone could have written it. Mr. Crossley rubbed his ginger moustache unhappily. He looked out over the bowed heads of Class 6B and wondered what to do about it.

He decided not to take the note to the headmistress. It was possibly just a joke, and Miss Cadwallader had no sense of humor to speak of. The person to take it to was the deputy head, Mr. Wentworth. But the difficulty there was that Mr. Wentworth’s son was a member of 6B—the small boy near the back who looked younger than the rest was Brian Wentworth. No. Mr. Crossley decided to ask the writer of the note to own up. He would explain just what a serious accusation it was and leave the rest to the person’s conscience.

Mr. Crossley cleared his throat to speak. Some of 6B looked up hopefully but Mr. Crossley had changed his mind then. It was journal time, and journal time was only to be interrupted for a serious emergency. Larwood House was very strict about that rule. Larwood House was very strict about a lot of things, because it was a boarding school run by the government for witch-orphans and children with other problems. The journals were to help the children with their problems. They were supposed to be strictly private. Every day, for half an hour, every pupil had to confide his or her private thoughts to their journals, and nothing else was done until everyone had. Mr. Crossley admired the idea heartily.

But the real reason that Mr. Crossley changed his mind was the awful thought that the note might be true. Someone in 6B could easily be a witch. Only Miss Cadwallader knew who exactly in 6B was a witch-orphan, but Mr. Crossley suspected that a lot of them were. Other classes had given Mr. Crossley feelings of pride and pleasure in being a schoolmaster; 6B never did. Only two of them gave him any pride at all: Theresa Mullett and Simon Silverson. They were both model pupils. The rest of the girls tailed dismally off until you came to empty chatterers like Estelle Green, or that dumpy girl, Nan Pilgrim, who was definitely the odd one out. The boys were divided into groups. Some had the sense to follow Simon Silverson’s example, but quite as many clustered around that bad boy Dan Smith, and others again admired that tall Indian boy Nirupam Singh. Or they were loners like Brian Wentworth and that unpleasant boy Charles Morgan.

28 October 1981,
Theresa Mullett wrote in round, angelic writing.
Mr. Crossley has found a note in our geography books. I thought it might be from Miss Hodge at first, because we all know Teddy is dying for love of her, but he looks so worried that I think it must be from some silly girl like Estelle Green. Nan Pilgrim couldn’t get over the vaulting horse again today. She jumped and stuck halfway. It made us all laugh.

Simon Silverson wrote:
28. 10. 81. I would like to know who put that note in the geography books. It fell out when I was collecting them and I put it back in. If it was found lying about we could all be blamed. This is strictly off the record of course.

I do not know,
Nirupam Singh wrote musingly,
how anyone manages to write much in their journal, since everyone knows Miss Cadwallader reads them all during the holidays. I do not write my secret thoughts. I will now describe the Indian rope trick which I saw in India before my father came to live in England . . .

Two desks away from Nirupam, Dan Smith chewed his pen a great deal and finally wrote,
Well I mean it’s not much good if you’ve got to write your secret fealings, what I mean is it takes all the joy out of it and you don’t know what to write. It means they aren’t secret if you see what I mean.

I do not think,
Estelle Green wrote,
that I have any secret feelings today, but I would like to know what is in the note from Miss Hodge that Teddy has just found. I thought she scorned him utterly.

At the back of the room, Brian Wentworth wrote, sighing,
Timetables just ran away with me, that is my problem. During geography I planned a bus journey from London to Baghdad via Paris. Next lesson I shall plan the same journey via Berlin.

Nan Pilgrim meanwhile was scrawling,
This is a message to the person who reads our journals. Are you Miss Cadwallader, or does Miss Cadwallader make Mr. Wentworth do it?
She stared at what she had written, rather taken aback at her own daring. This kind of thing happened to her sometimes. Still, she thought, there were hundreds of journals and hundreds of daily entries. The chances of Miss Cadwallader reading this one had to be very small—particularly if she went on and made it really boring.
I shall now be boring,
she wrote.
Teddy Crossley’s real name is Harold, but he got called Teddy out of the hymn that goes “Gladly my cross I’d bear.” But of course everyone sings “Crossley my glad-eyed bear.” Mr. Crossley is glad-eyed. He thinks everyone should be upright and honorable and interested in geography. I am sorry for him.

But the one who was best at making his journal boring was Charles Morgan. His entry read,
I got up. I felt hot at breakfast. I do not like porridge. Second lesson was woodwork but not for long. I think we have games next.

Looking at this, you might think Charles was either very stupid or very muddled, or both. Anyone in 6B would have told you that it had been a chilly morning and there had been cornflakes for breakfast. Second lesson had been PE, during which Nan Pilgrim had so much amused Theresa Mullett by failing to jump the horse, and the lesson to come was music, not games. But Charles was not writing about the day’s work. He really was writing about his secret feelings, but he was doing it in his own private code so that no one could know.

He started every entry with
I got up.
It meant, I hate this school. When he wrote
I do not like porridge,
that was actually true, but porridge was his code word for Simon Silverson. Simon was porridge at breakfast, potatoes at lunch, and bread at tea. All the other people he hated had code words too. Dan Smith was cornflakes, cabbage, and butter. Theresa Mullett was milk.

But when Charles wrote
I felt hot,
he was not talking about school at all. He meant he was remembering the witch being burned. It was a thing that would keep coming into his head whenever he was not thinking of anything else, much as he tried to forget it. He had been so young that he had been in a stroller. His big sister Bernadine had been pushing him while his mother carried the shopping, and they had been crossing a road where there was a view down into the Market Square. There were crowds of people down there, and a sort of flickering. Bernadine had stopped the stroller in the middle of the street in order to stare. She and Charles had just time to glimpse the bonfire starting to burn, and they had seen that the witch was a large fat man. Then their mother came rushing back and scolded Bernadine on across the road. “You mustn’t look at witches!” she said. “Only awful people do that!” So Charles had only seen the witch for an instant. He never spoke about it, but he never forgot
it. It always astonished him that Bernadine seemed to forget about it completely. What Charles was really saying in his journal was that the witch came into his head during breakfast, until Simon Silverson made him forget again by eating all that toast.

Her Last Breath: A Kate Burkholder Novel by Linda Castillo
Cold Comfort by Ellis Vidler
Wolf in Man's Clothing by Mignon G. Eberhart
The Yearning by Tina Donahue
Out of Bounds by Carolyn Keene
A Cold White Sun: A Constable Molly Smith Mystery (Constable Molly Smith Series) by Delany, Vicki
Whatever it is, I Don't Like it by Howard Jacobson
Into the Storm by Ruth D. Kerce
The Pagan's Prize by Miriam Minger
Blood Trinity by Carol Lynne