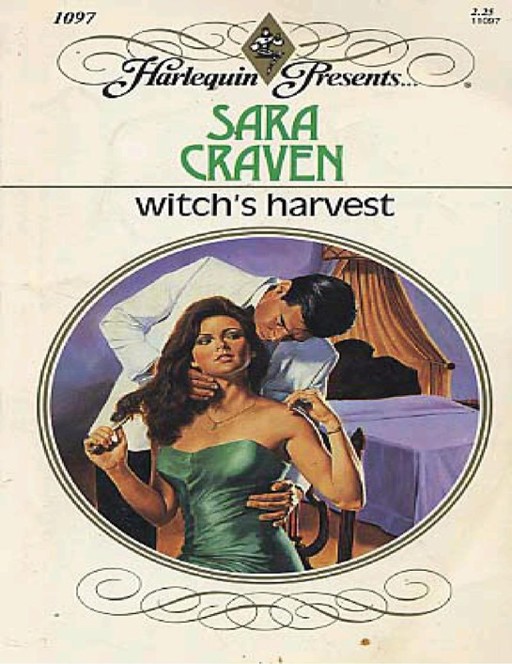 "We can't marry! We're strangers to each other!"

There was a desperate quality to her voice, but Vasco's response was gentle. "Yes, Abby, but intimate strangers. You cannot deny
that in one area at least we are compatible. And I promise next time will be even better,
cariña
."

"You don't have to promise me anything." The color flared in Abby's face. "And I—I never want you to touch me again," Abby said
shakily, knowing she lied. "If there's a baby, I'll cope. People do these days."

"Wrong,
señorita
." Vasco's hand fastened on her arm and his gentleness was gone.

"If you carry my heir, then I intend him to be born with my name. And as for not wishing to be touched—" he smiled derisively "—I
intend to change your mind on that score, too."

SARA CRAVEN probably had the ideal upbringing for a budding writer. She grew up by the seaside in a house crammed with books,

with a box of old clothes to dress up in and a swing outside in a walled garden. She produced the opening of her first book at age five
and is eternally grateful to her mother for having kept a straight face. Now she has more than twenty-five novels to her credit. The
author is married and has two children.

The lift doors slid together, and the steel cage began its upward journey with a faint lurch, which Abigail Westmore's stomach

What the hell, she thought despairingly, was she doing, acting as a reluctant messenger between her cousin and her fiancé?

Why hadn't she refused— stood out for once against Della and her outrageous demands? Because unless she'd totally

misunderstood the situation, the letter in her bag contained some kind of ultimatum, and was the last thing she wanted to be

involved with, particularly when… Her mind closed off.

For the umpteenth time she looked in her bag to check that the letter was still there, that she hadn't, by some Freudian slip, lost
it on the way here. Then she glanced at her watch, making sure that her timing was exact. Della had been most insistent about

'You've got to deliver it just before six,' she'd said sharply. 'So don't go into one of your dreams, Abby, and forget. Everything
depends on you.'

Abby had no wish for 'everything' to depend on her, particularly when it meant delivering a message to Vasco da Carvalho

which he would not want to receive.

They used to execute people who brought bad news in the old days, she thought, grimacing at her reflection in the lift mirror.

Not that she thought Vasco would go to those lengths, although she suspected he had a temper, but he would be less than

pleased to know that Della had been discussing the rift between them with a third party.

She could always slide the envelope under the door and vanish, she thought, then sighed. No, she had to give the letter to him

in person. Della had been adamant about that too.

'And if he's not there,' she added, 'you must phone me instantly—at this number.' And she had handed Abby a folded slip of

Abby had been mildly surprised. After all, she'd spent the greater part of her life, since her parents' death, sharing her cousin's
luxurious home in St John's Wood. She could, she thought, be expected to remember the phone number, even if she had been

living in her own bed-sitter for the past six weeks. But when she glanced at the paper later, she was disturbed to see that Della

had written the number of a Paris hotel.

Although she wasn't sure why she felt uneasy. Della, and her mother, often popped across to Paris on shopping expeditions for

Della's trousseau. And now that Della had learned to her fury and alarm that her future married life would not be spent in the lap
of luxury in Rio de Janeiro but on an obscure cocoa plantation in Amazonia, she would probably have to re-think much of her

wardrobe. But it seemed odd that she was going shopping when matters between Vasco and herself were so unsettled.

The lift halted, and Abby emerged reluctantly into the corridor, her heels sinking into the deep pile of the carpet. It was the first
time she had visited the apartment block where Vasco was staying, and it was all as luxurious as she'd imagined. She could see

why Della had fallen into the trap of believing this was the kind of background Vasco belonged to, rather than some obscure

corner of the Brazilian rain forest. She could understand, to some extent, why her cousin had been convinced that the cocoa

bean plantation was just a temporary aberration—a rich man's whim—and that when he was married, Vasco would cheerfully

take his place in his family's wealthy export company in Rio, with all that implied.

Abby had never been so sure. She didn't believe Vasco's dark, elegant good looks concealed any such weakness of purpose.

The firm lines of his mouth, the determined set of his chin belied Della's conviction that she could wind him round her little

And Della's shock and outrage when he had made it bluntly clear that the cocoa plantation was his life, and that, as his wife, she
would be expected to share it with him, had been almost comical. Except that Abby had never felt like laughing.

She reached the door of the flat and stopped, swallowing nervously. There was a large gilt-framed mirror on an adjoining wall,

and she looked herself over, pushing her fingers through her fine mouse-brown hair, silently rehearsing what she was going to

say, if he answered the door. 'Oh, hi. I was just passing, and Della asked me…'

No, that wouldn't do, she thought ferociously. How could she go for the casual approach when she looked as white as a ghost,

her eyes twice their normal size?

But Vasco da Carvalho had looked at her so seldom, she thought without resentment, that he might think her pallor was

She wished with all her heart that she could have shared his indifference. She wished that the only emotion he had inspired in

her could have been the polite interest anyone could expect to feel for her cousin's fiancé. Only it hadn't happened like that.

She was an ordinary, practical girl. She didn't believe in grand passions, or love at first sight. If anyone had told her it could
happen, she would have treated it as the joke of the year.

She had walked into her aunt's drawing-room one evening and found him standing, with Della, in front of the fireplace. And

nothing had ever been the same again, nor ever would be.

It had proved the impetus she needed to get her out of her uncle's home, however. She had made one or two unsuccessful bids

for freedom in the past, only to be dissuaded by her aunt's fretful accusations of ingratitude, but this time she'd stuck to her

guns. There was no way she could go on living there, seeing Vasco every day, watching Della bloom as his future wife. She had

thought her hidden feelings for Vasco were her own personal secret, but she had been wrong.

That was why she was here, hanging round his door, trying to pluck up courage to ring the bell.

Della's words, and the malicious smile which had accompanied them, still haunted her. 'You either do as I ask, Abigail dear, and

deliver my letter in person, and on time, or I'll tell Vasco about the pathetic little crush you have on him.'

Della's smile had widened. 'Oh, no, it isn't, and we both know it. You're incredibly transparent, darling, and if Vasco wasn't

absolutely besotted with me he'd probably have noticed your slavish devotion for himself by now.' She held out the letter.

'Believe me, Abby, it would give me great pleasure to point out that you're dying of love for him. It would give us something to

laugh about during the long winter evenings after we're married.' She studied the strained lines of Abby's face with overt

satisfaction. 'And we will be married, you know. He's crazy about me, and once he realises I mean business over this Amazon

jungle fiasco, he'll come to heel.' Her lovely face took on a faintly lascivious look. 'After all, he won't want to forgo getting me into
bed at last. Not that waiting was my idea in the first place, but Ina, after she'd introduced us at that Embassy party, warned me if I
wanted marriage, I'd have to be a good, pure girl, and string him along, and it's certainly worked!' She giggled. 'It's been almost
fun, playing the sweet little virgin, and watching him sweat. I think, if it hadn't been for his damned sense of honour, I'd have let
him persuade me. Because he is beautiful, as you've managed to work out for yourself, my sweet, like some gorgeous golden-skinned animal.' She sighed. 'I bet he'll be sensational in the sack!'

Abby had winced at the crudity of it. She said in a low voice, 'Dell, if you love him…'

'Oh, I do.' Della's eyes gleamed. 'But I don't consider the world well lost for love. If Vasco imagines I'm going to follow him to the
Amazon basin like a little submissive wife, then he can think again. The choice is his: this—Riocho Negro hellhole, or me. It's

Abby shuddered as she remembered. She took the letter out of her bag, handling it gingerly as if it was a time-bomb, then rang

the bell, praying he would be out.

But her prayers were not answered. Almost immediately the door swung open, and Vasco stood there surveying her with frank

'Abigail?' he queried. 'I was expecting…'

'Della,' Abby supplied. She sent him a small nervous smile. 'I'm sorry to disappoint you.'

'You have not,' he told her politely. 'It is naturally a pleasure to meet you again. It is some weeks, I think…' He hesitated. 'Would
you like to come in?'

'There's really no need,' she said hurriedly. 'Actually, I'm here on Della's behalf.' She held out the letter. 'She asked me to give
you this.'

A Rural Affair by Catherine Alliott
Factfulness: Ten Reasons We're Wrong About the World – and Why Things Are Better Than You Think by Hans Rosling
The Shade Riders and the Dreadful Ghosts by Bxerk
Blue Heaven by Joe Keenan
American Experiment by James MacGregor Burns
PUCKED Up by Helena Hunting
Irresistible by Bankes, Liz
Unquenchable Desire by Lynde Lakes
Plague of Mybyncia by C.G. Coppola
Mystic: A Book of Underrealm by Garrett Robinson