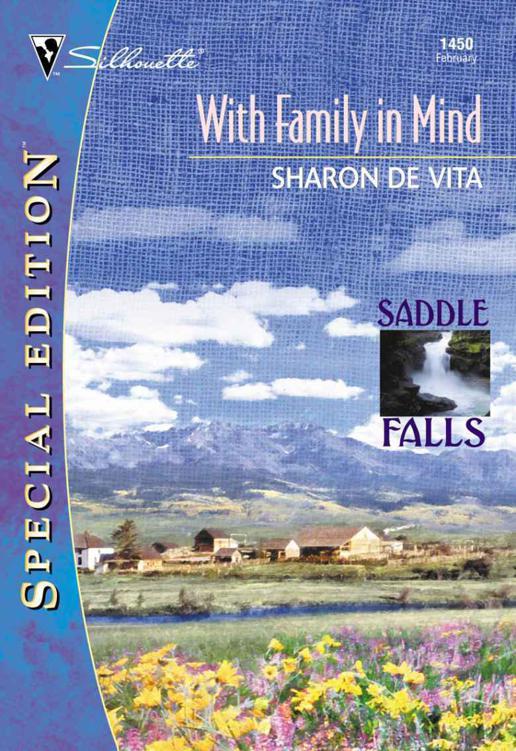 Jake Ryan! The rush of emotions that came with recognition stunned Rebecca.

It had been so long since she’d allowed herself the luxury of
any
feelings.

First came anger, resentment, then relief that he hadn’t recognized
her
—that, for the moment at least, she was safe. But her relief was tinged with fear…and something else.

Rebecca struggled to swallow her emotions, to put them back in their guarded place deep inside her heart.

She’d have to be very careful, she realized, taking a deep breath to get her rampaging sensations under control. She couldn’t afford any mistakes. Not now. What she had to do here in Saddle Falls was far too important….

Forcibly shaking off her shocking physical response to Jake, she managed a cool smile, met his gaze and shook his hand. “How do you do, Mr. Ryan?”

Do I have a sweet lineup for you—just in time for Valentine’s Day! What’s more enticing than a box of chocolates? The answer lies in the next story,
Cordina’s Crown Jewel
, from
New York Times
bestselling author Nora Roberts’s CORDINA’S ROYAL FAMILY series. This gem features a princess who runs away from royal responsibility and straight into the arms of the most unlikely man of her dreams!

Another Valentine treat is Jackie Merritt’s
Marked for Marriage,
which is part of the popular MONTANA MAVERICKS series. Here, a feisty bronco-busting beauty must sit still so that a handsome doctor can give her a healthy dose of love. And if it’s heart-thumping emotion you want, Peggy Webb continues THE WESTMORELAND DIARIES series with
Bittersweet Passion
, a heavenly opposites-attract romance between a singing sensation and a very handsome minister hero.

In
With Family in Mind
, Sharon De Vita launches her gripping SADDLE FALLS miniseries. One Valentine’s Day, this newlywed author admits, she wrote a heartwarming love poem to her husband about their first year together! Our next family tale is
Sun-Kissed Baby,
by Patricia Hagan—a darling tale of a new single mom who falls for the man she thinks is her little boy’s father. This talented author shares her Valentine’s Day dinner tradition with us—making “a heart-shaped meatloaf” and at the end of the pink meal, “a heart-shaped ice cream cake, frosted with strawberry whipped cream.” The icing on the cake this month is Leigh Greenwood’s
Undercover Honeymoon
, a passionate tale of two reunited lovers who join forces to stay ahead of a deadly enemy and care for an orphaned little girl.

Make sure that you sample every Special Edition delight this month has to offer. I wish you and your loved ones a warm and rose-filled Valentine’s Day (and that box of chocolates, too)!

The courage of a man is not measured by how he handles life,
but how he handles death. This book is dedicated
in loving memory of Glen Douglas Cushing.
For your remarkable courage in life and in death.
For the dignity you held close even as life slipped away.
For the generosity of your heart for all those you loved.
For the joyous memories that will forever remain with those you left
behind. The sun dimmed a bit the day you left, but the angels
rejoiced, welcoming one of their own…home.

I Married a Sheik

a former adjunct professor of literature and communications, is a
USA Today
bestselling, award-winning author of numerous works of fiction and nonfiction. Her first novel won a national writing competition for Best Unpublished Romance Novel of 1985. This award-winning book,
Heavenly Match
, was subsequently published by Silhouette in 1985. Sharon has over two million copies of her novels in print, and her professional credentials have earned her a place in
Who’s Who in American Authors, Editors and Poets
as well as the
International Who’s Who of Authors
. In 1987 Sharon was the proud recipient of the
Romantic Times Magazine
Lifetime Achievement Award for Excellence in Writing.

A newlywed, Sharon met her husband while doing research for one of her books. The widowed, recently retired military officer was so wonderful, Sharon decided to marry him after she interviewed him! Sharon and her new husband have seven grown children, five grandchildren, and currently reside in Arizona.

I have a confession to make: men fascinate me! I absolutely love delving into the special relationships between men. Each relationship is different and unique based on the man in question, but no male relationship is more special than the relationship between brothers. No matter how many years separate them, brothers seem to have a distinct bond that transcends time or space.

I wanted to explore this bond with four extraordinary brothers: the Ryan family of Saddle Falls. A strong, intensely devoted family—headed by their patriarchal grandfather, Tommy Ryan, an Irish immigrant who believes in family above all else—they are special because one of the brothers, the youngest, Jesse, was kidnapped from his own home as a young child. Jesse’s kidnapping has a profound effect on the lives as well as the relationships of his remaining brothers—Jake, Jared and Josh.

I hate to admit I fell in love with the Ryan men. Each one was different and special in his own way, and the way he dealt with his grief and guilt. It was fun for me to explore the many facets of each man and then watch as their protective shells melted with the love and devotion of the “right” woman. Writing this series made me laugh—the antics of Jared’s mischievous five-year-old twin sons will do it every time—and made me cry for the love and loss that this one family endured. But it also gave me something else: a profound belief in the ultimate healing power of love. And family.

Even though Rebecca St. John hadn’t seen her mother in almost twenty years, she felt it only fitting that she give the woman a proper burial.

Shivering suddenly, Rebecca sat up in bed, blinking in the darkness of the unfamiliar hotel room, trying to shake off the remnants of a nightmare—the same nightmare that had haunted her since the last time she had seen her mother.

It had been a blisteringly hot August morning when her mother had been arrested in connection with the kidnapping of Jesse Ryan, the youngest of the four
Ryan brothers, grandsons of Tommy Ryan, the most prominent rancher in the state.

With a sigh, Rebecca closed her eyes, dragged her long black hair off her face, then flicked on the bedside lamp, rubbing her throbbing temple.

She hadn’t had these nightmares in years, nightmares that brought on ferocious headaches. Probably because it had been years since she’d allowed herself to think about her childhood.

With a weary sigh, Rebecca scooped her small clutch purse off the nightstand and dug out the bottle of aspirin. After tossing back two tablets with a long sip of water, she pulled the covers up to ward off a shiver, then leaned back against the headboard and closed her eyes with another sigh.

Which was why she’d come back to Saddle Falls.

It was time to confront the past, time to finally learn the truth about what had happened twenty years ago. Time to finally put her shameful past behind her.

About what had really happened the night of little Jesse Ryan’s disappearance.

As an investigative reporter, she honored truth above all else. Dug for it when others gave up. Kept at it long after others had quit, no matter how ugly,
how insidious, how shocking. She did whatever was necessary to get to the truth.

She was good at her job, and had a wall of plaques and awards to prove it. Good because she never allowed herself to become emotionally involved. Deliberately cool and dispassionate, distant both personally and professionally, she’d trained herself to be that way out of pure necessity.

Perhaps because so many people in her young life had hurt and betrayed her—including the mother, who should have loved and protected her, but instead had recklessly abandoned her—Rebecca had learned never to trust anyone.

People were fallible, emotions unreliable. But the truth was tangible, something neither emotions nor people could change.

Shifting her weight, Rebecca tightened her fingers on the duvet, pulling it up to her chin as she glanced around the room. Saddle Falls had grown and changed since she’d lived here. Actually, the year she’d spent in Saddle Falls before her mother’s abandonment had been the happiest of her young life.

Her mother had been barely seventeen when Rebecca was born. Her mom’s family had already disowned their wild, wayward daughter, and since Rebecca had never known her father, she’d been left to the mercy of a rebellious teenager who had been little more than a child herself. Hardly fit or responsible enough to love or care for a helpless baby.

By the time Rebecca turned seven, they’d moved sixteen times, living in one tiny apartment or trailer
after another.
Stability
wasn’t a word her mother was familiar with.

Miraculously, the year Rebecca turned seven, they’d landed in Saddle Falls, Nevada. Her mother had been hired as a nanny for the four young Ryan brothers. As part of her compensation, they’d been given the small carriage house on the northernmost border of the sprawling Ryan ranch to live in.

It was small, only four spartan rooms, but to Rebecca it had seemed like a palace. It was the first real home she’d ever known, and she loved it. But then one night the youngest of the four Ryan boys, Jesse, had disappeared while in her mother’s care.

His parents and grandfather had been out for the evening, and his three older brothers were at a sleepover at a neighbor’s, leaving little Jesse alone with Rebecca’s mother. Sometime during the night he simply vanished without a trace.

And Rebecca’s life had never been the same.

The next morning, the Saddle Falls police had taken her mother in for questioning, while Rebecca had been scooped up into the care of Social Services.

Even though her mother was released after a few hours, that was the last time Rebecca had ever seen or heard from her mom. If the woman knew of her daughter’s whereabouts in the ensuing years, she’d never made any attempt to contact her or reunite with her.

Her mother may have forgotten about her, but Rebecca had never forgotten her mom, had never stopped wondering what had happened to her.

She had no idea until three days ago, when an anonymous letter arrived at the newspaper office where she worked, informing her of her mother’s death. The woman had apparently come back to Saddle Falls sometime in the past six months.

And so she’d come back to Saddle Falls to bury her mother and say a final goodbye to a woman she’d never really known.

It was time. Time to put to rest the ghosts that had haunted her for twenty years; time to finally bury the demons she’d carried around like a heavy knapsack.

Stifling a yawn, Rebecca turned off the bedside lamp, then closed her eyes, willing the pain and the nightmares away.

She only hoped that she could live with the truth once she found it.