With Love From Ma Maguire 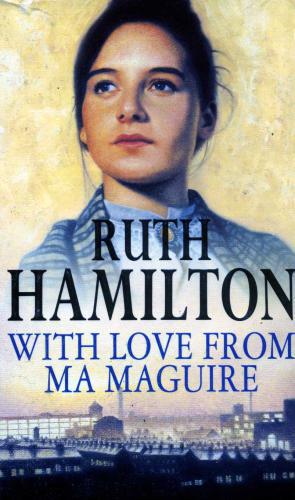 From the very first meeting of Philly Maguire and Richard Swainbank, a pattern of overpowering love, conflict, hatred, and secrecy was born. For although Philly and Richard were on opposite sides of the mill floor, they recognised - both of them - that they were equally matched in strength of character and the capacity for overwhelming sexual passion.Thus began the forty years of conflict between the two families - the Swainbanks, cushioned by wealth but tearing each other to pieces with the violence of their emotions - and the Maguires, proud, betrayed, and led by the vibrant and magnificent Philly.A major saga of the Lancashire cotton mills - of the strong, violent, real people who both owned them, and worked in them - and of the dangerous things that love can do to families throughout the generations.

From the very first meeting of Philly Maguire and Richard Swainbank, a pattern of overpowering love, conflict, hatred, and secrecy was born. For although Philly and Richard were on opposite sides of the mill floor, they recognised – both of them – that they were equally matched in strength of character and the capacity for overwhelming sexual passion.

Thus began the forty years of conflict between the two families – the Swainbanks, cushioned by wealth but tearing each other to pieces with the violence of their emotions – and the Maguires, proud, betrayed, and led by the vibrant and magnificent Philly.

A major saga of the Lancashire cotton mills – of the strong, violent, real people who both owned them, and worked in them – and of the dangerous things that love can do to families throughout the generations.

With Love from Ma Maguire

For David and Michael Thornber, my two wonderful sons.

Also for Aunts Rachel Lundy, Agnes Sexton, Dorothy and Gladys Girling and in memory of Uncle Jack Girling who died during the preparation of this book.

Many thanks to: Heather Jeeves, agent and friend; the Bolton Library Service for unflagging tolerance; the
Bolton Evening News
; and my cousin Eileen Murphy who helped greatly with research.

Somewhere above it all, a watery sun was setting. Here and there a few brave rays found access, allowing the scene a strange and eerie light, a mixture of greys and pale sepias that blended well with old brick and stone. School Hill, known far and wide throughout Bolton as ‘Little Ireland’, caught its corporate breath at the end of another Monday, a dawn-to-midday struggle with sheet and quilt, copper and fire, tub and mangle. Now, at six in the evening, the back alleys were denuded of billowing whites and no Irish or Lancashire voice cried out against the coming of a ragman’s cart. But although a thousand chimneys had begun to cool, their legacy hung over the houses, mingling with sulphuric fumes from nearby factories where paper, leather, machine parts and, above all, cotton were produced.

As a church clock chimed the hour, Delia Street came out to await the event which had been the sole topic of gossip all day. In twos and threes they gathered beneath lamps as yet unlit, while every doorway was open and occupied by an aproned female figure. Little noses were flattened against windows smeared with drawings shaped by sticky fingers in mists of breath. Whispered messages passed along the row, words ‘mee-mawed’ by women used to communicating without sound during their childfree days in the mills.

‘I’d have swore it were bound to rain about tennish and me with nowt dry enough to iron. Hey – are you sure he took everything with him, Edie?’

‘Took all his own, I reckon. Her’ll have a paddy on tonight, I’ll bet. She’s told him to go often enough, ’cos I’ve heard it all through me back wall.’

‘Nay, don’t ask me, lass. Who can tell what that one’ll do? Never talks to nobody, never lets on in the shops and that. I stood behind her only last week in the tripe queue and she never batted a lid and me her next door neighbour. But she lets on at him, I can tell thee. I’ll swear she throws flat irons or summat at him. Mind you, happen he asks for it. Some of ’em do, you know. We can’t be sure what goes on behind a closed door, though I’ve heard her lose her rag a fair few times.’

‘Aye. Well, same as I’ve always said afore, you can’t treat a man like that for ever, Edie. Mine’d smack me one in the gob if I tret him that road. Who’s she think she is anyrate? All airs and graces, never a good word for nobody. Have you seen her furniture when that door’s open? Table on its own’s worth a few bob. How’d he manage that just selling bottles of rubbish what she throws together in the back scullery?’

‘I’ve heard as how it’s not all rubbish, though. Her black tonic’s supposed be a right pick-me-up according to Elsie Shuttleworth. That eldest lad’s never looked back since he were dosed . . .’

Every head turned towards the tall figure which materialized, or so it seemed, out of the fog created by the day’s many labours in mill and scullery. Casually, they leaned against wall and jamb, each pretending not to notice the woman, every last one of them apparently engrossed in studying a pavement crack or a wedding ring.

As soon as she reached the end of the street, she felt the atmosphere, knew that she was somehow the centre of attention. They didn’t fool her, not for a minute. Like a painting forever frozen behind glass, the stillness of the tableau was unreal, unnatural. So lazy they looked, slumped motionless in doorways, yet she knew that any one of them could outrun a galloping racehorse if it meant saving a sheet on a wet washday. She paused at the corner outside the clogger’s where the tap-tap of hammer on nail and wood suddenly ceased as a row of barefooted customers rose in unison to peer through the window. When the woman turned to face them, they backed away from her steady blue gaze, a stare that seemed to penetrate the dimmest of evenings.

Course, they weren’t really a-feared of her. She was just another Irish immigrant, one among many, no better or worse off than the rest of them except for her house being a bit on the grand side. But there was something about her, right enough. For a kick-off, she was a sight taller than many of the men and it wasn’t natural for a woman to keep her head so near the ceiling. She must have been not far short of five foot nine or ten, straight as a die and with an odd beauty that was in itself slightly unnerving in an area where the women aged young. Not a line on her face, though she must have been all of twenty-five. But it was the eyes that put most folk off. Never a word, yet she looked straight through a person, as if she could see what he was thinking, as if she knew the deepest and best kept of secrets, the darkest corner. And the way she made a body feel – well, it wasn’t easy to express in normal language. Three years she’d lived here and hardly a cough or a spit out of her. Aye well. She’d be getting her comeuppance any minute now. But who would tell her? Which one of them, man or woman, would dare come forward and say . . . ?

They sank on to the bench as the clogger wiped his hands and came round the counter. ‘Mrs Maguire?’

She hesitated fractionally before stepping through the front door and into the small room. ‘Yes?’

One of the men on the bench swallowed audibly, blushing under layers of miner’s dust. Like many of the poor Irish in this community, he hid his superstitions, laughed at them over a pint in the vault at the Bull, denied the folklore that seemed to follow travellers across dividing waters. But here was a woman as near a witch as any good man would care to get. Wasn’t it said by many that her granny had been given special healing powers and the ability to place the odd curse? And didn’t this one here brew weird teas and potions, wasn’t she known for her strange silences? All those pots in her back yard too, full of queer-looking plants, they were, stuff she used for her funny medicines that her husband was supposed to hawk about the streets.

The temporary silence was broken as ‘Pey’ Peter rounded the corner, his high-pitched voice raised in its familiar cry, ‘Peys! Come and get your hot peys! Black ones, green ones, fetch the jug, Missus!’ and the scutter of clog irons was heard as children and women arrived to buy peas for supper. Most of the pea purchasers craned their necks to peer into the clogger’s, but the subject of interest had already disappeared into the back workshop. Those waiting for clog repairs sat rigidly in a line near the wall, incapable of leaving the shop until they were re-shod.

‘’Er won’t take this job well,’ muttered an old Bolton weaver who had just popped in on his way off shift to get a new half-set of irons. ‘I reckon ’er’s not reet in the ’ead.’

‘Shush!’ whispered the Irish miner. ‘Hasn’t she the whole street to face just now? This will not be easy for her.’ Aye, there was pride in that bonny face, sure enough. And temper too. Hadn’t he himself seen Seamus Maguire beating it hell for leather down the street on several occasions as if the devil were on his tail? The four men in the shop seemed to stop breathing as they strained fruitlessly to overhear something – anything at all – from the back room, for wouldn’t their wives be agog with it when they got home, mithering over what had been said and how did she take it?

She emerged after several minutes, neither hair nor feature out of place. ‘I’ll be thanking you then, Mr Chadwick,’ she said, her voice firm and clear. ‘I knew he’d be going home sooner or later – in fact, I told him to go. Do not fear on my account, for Seamus will send money. He has . . . interests in Limerick, you see.’

Freddie Chadwick watched the ramrod back as it left the shop and sailed off up the pavement, that familiar Spanish-galleon posture proclaiming her advancing pregnancy. He shook his large head sadly. A fair few comings and goings he’d seen in this street, midnight flits, births and deaths, families near murdering one another when the strain got too much for them. But this was a right bad do, this was. ‘Interests in Limerick?’ he mumbled to no-one in particular. ‘That one’s stuck his fingers in more pies than they’ve got in Tattersall’s bakery. She’s all right, is Mrs Maguire. Just over-proud, is all. Eeh well.’ He lowered himself on to his stool. ‘Kiddy coming, no money and no work. There’ll be nowt down for that poor lass once the child’s born.’ He picked up a clog and tore off the irons angrily, then filled his mouth with a dozen or so wooden plugs, thus ending his monologue. There was no merriment in the clogger’s that night. He was usually good for a laugh or two, was Skenning Freddie, who had acquired his nickname because of crossed eyes. Yet, in spite of this affliction, he could peg a nail hole with the best of them, while his handmade footwear was reputed to be the finest for many a mile. But this evening he stuck to his work, not a smile nor a joke on his lips.