Read Within This Frame Online

Tags: #Within This Frame 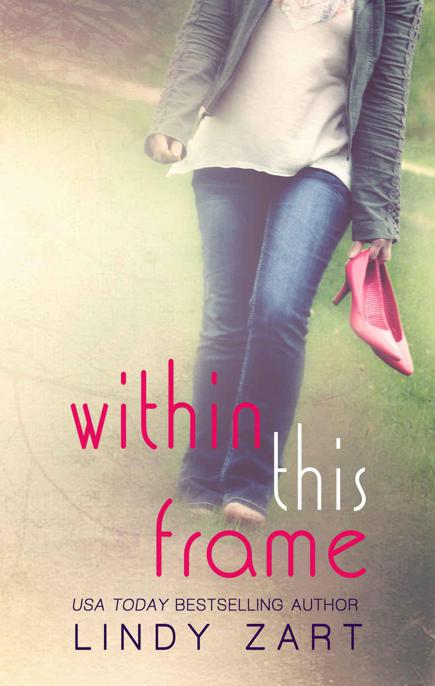 Names, characters, places, and incidents either are products of the author’s imagination or are used fictitiously. Any resemblance to actual events or locales or persons, living or dead, is entirely coincidental.

All rights reserved. Printed in the United States of America. No part of this book may be used or reproduced in any manner whatsoever without written permission except in the case of brief quotations embodied in critical articles and reviews.

To my grandmothers Betha and Mary—with love.

From Jamie, a reader:

I judge the way I look, the way I talk, how unorganized I am and how my anxiety issues make me boring or seem crazy. I could go on and on. I am 28 and I still struggle regularly, probably more than I did as a teen or young adult. I know what it is like to not like yourself and to constantly tear yourself down. I'm the queen of self-deprecation. Anyway I think everyone has issues with themselves to some degree, and I hope others out there realize that the only one who even cares enough to judge you as harshly as you think people do is you. Everyone else is in their own little world full of their own issues and too busy worrying about themselves to really care about the shortcomings we beat ourselves up over every day.

S
HE DIDN'T UNDERSTAND
how something so pretty could be lethal. The card was cream vellum with words tinged in gold abounding from it. Appealing to look at, deadly to read. Each word pulled her farther into despair the further she read. It was a joke. It had to be a joke.

It wasn't a joke.

Maggie realized she had the invitation crumpled between her fingers and let it fall from her limp hand to rest upon the kitchen table. Her eyes unseeingly grazed each surface of the spacious, cheery salmon and butter yellow room until they came back to the small piece of paper. She stared at it as though it was a venomous snake, poised to strike. Strangely enough, she'd already felt the piercing of it, right into her being.

She checked the date on the invitation. September 5
th
was roughly four months away. Maggie took a deep breath and crossed the room to get to the foyer. Once there, she stopped before the mirror to examine herself. Could she do it? A frown of displeasure was glued to her face.

That last one dug in like a blade to the heart and she swallowed around the painful pulse of it.

They weren't the only names that had ever held importance to her, but they were the ones she'd never forgotten. Each name elicited a mixture of determination and hopelessness. Could she face them all again? There was no doubt in her mind that most, if not all, of the aforementioned would be there.

She had varying reasons for not wanting to see them—some because she loathed them and others because she adored
them.

With trepidation, Maggie opened the purple robe and cringed at the sight that met her reflection. She tried to avoid her image as much as she could because it depressed her. There were bulges where there shouldn't be, more hips than she cared to see, and flesh that sagged. Four months
.
How could she possibly shed the extra thirty pounds she’d gained over years in months?

There was one person Maggie knew could help her and she really didn't want to contact her. That would give Nora a reason to raise her perfectly arched eyebrows and smile her triumphant smile. Unease slithered down Maggie’s back like talons of dread. She retrieved her cell phone from the antique desk in the foyer and headed toward the back of the house. She opened the kitchen patio doors and stepped outside onto the sunlit deck.

Maggie took a deep breath and hit her sister’s number.

All her good intentions flew away as soon as Nora answered with, “Bacon! I haven't talked to you in months. Since Easter, yes? When you took a nosedive into the chocolate pudding pie.”

“Hello, Nora.” She ground her teeth together before she could stop herself.

Maggie glared at the copse of maple trees that shaded her from the sun, their branches reaching down like leafy arms. The longer she stared at the foliage surrounding her yard, the calmer she became. She sat down and focused on the therapeutic sound of trickling water from the manmade pond located directly beneath those bountiful trees. Agitation began to seep from her limbs.

“We should do lunch, play catch up. When and where? I’m pretty busy, but I can fit you in next Tuesday. You’re my sister, after all.”

Tension prickled her skin like angry gnat bites and she shifted uncomfortably on the wrought iron bench. “Actually, I wanted to ask you something.”

She gnawed on the inside of her lower lip until she tasted blood. “Is there a personal trainer from your gym you would recommend to work with me?”

The pause on the other end of the line was profound, and nerve-wracking.

“I have an event coming up and want to get in shape before it,” Maggie said in a rush.

Nora squealed and Maggie briefly pulled the cell phone away from her ear. “It's about time! You have no idea how happy hearing that makes me.” Some of her enthusiasm diminished when she continued. “We're short-staffed at the moment, but I could come over after seven every night to work with you.”

“No! I mean, I couldn't. That would be taking advantage of you and your business. Also, I thought . . . I thought I might listen better to a guy,” she lied. It was bad enough asking Nora for help, there was no way she would survive dealing with her on a daily basis.

“Oh.” Disappointment flooded the word and guilt washed over Maggie. “I’ll ask around. Like I said, we’re short-staffed right now, but we do work with private trainers once in a while. I’ll look through the list and set something up.

“How soon do you want to start? I recommend tomorrow, at least to talk to them anyway. You’ll also want them to make up a meal plan for you. I’d toss out the bacon you got stockpiled before they show up.” Nora laughed.

Maggie wanted to say she didn’t even eat bacon anymore, but that would be a lie.

“Do you have a scale? If not, I know some good ones you can purchase. You need—”

“I have to go now. Cake in the oven,” she interrupted and ended the call to the sound of her sister’s gasp.

Maggie set down the phone and the itchy, irritated feeling faded once more. Warm wind rustled her shoulder length auburn waves. She shifted on the bench and squinted against the sunlight as it rayed her skin and heated up her scalp.

The more she thought about it, the more determined she became. She just needed a little push in the right direction, someone to help her make better food decisions and motivate her to exercise. Excitement stamped her face with a bright smile.

Realizing she hadn’t had lunch yet, Maggie made her way back inside and perused the refrigerator contents. Leftover pizza beckoned from the top shelf. It was topped with a rainbow of vegetables in the form of green and black olives, tomatoes, red onions, mushrooms, and green peppers. Fingers tight around the refrigerator door, she told herself it couldn’t be that unhealthy for her.

There was expired yogurt, wilted lettuce, and crabmeat to choose from in place of the pizza.

She applauded herself on her show of willpower as she reached for the crabmeat instead of the pizza, but it soon left her as she melted butter for it.

“It’s healthy . . . ish,” Maggie muttered as she sat at the white table and popped a butter-laden morsel in her mouth.

S
HE WAS LOOKING
at him in that way again—the expression on her face one he couldn’t put into words, but to which he was simultaneously pulled and repelled. He’d been the recipient of similar looks since he was twelve. Lance offered a small smile from where he stood across the room and immediately looked away. Let her wonder if that smile was intended for her or someone else.

“All right, people!” Herman Lyle clapped his hands. His vocal volume was set for ‘headache inducing loud’ at all times. “It’s almost time to film the first scene of ‘Easier Said’. I’m so excited I could shit myself.”

Some laughter followed that, but there were more rolled eyes and humoring looks than anything. Herman Lyle was a schmuck. It was by pure chance that he’d been hired to direct ‘Easier Said’, and they’d soon enough find out if that was a good thing.

The show was primarily set in an oversized cottage with blue siding, a red door, and brown shingles. Lance liked the neutral tones found inside and the plain brown furniture. He’d pick it over the interior of his dad’s house any day. The central air was on, but with the dozen or so people cramped into the downstairs of the house, it didn’t feel like it.

Herman’s bald head turned in a shiny circle as he searched for his main characters. He found Maggie, timid and silent, near Judith Fletcher, the actress hired to play her mom on the show. Judith offered Maggie one of her sparkly smiles and a pat on the head, like she was a pet. Herman pointed at Maggie and jerked his thumb back to where he wanted her.

“Derek! Get out here!” Herman bellowed as he dabbed a stained red handkerchief against the sweat dripping from his fleshy, overheated face.

“It’s Lance,” Lance said as he disengaged from the wall and moved toward the director.

“It’s Derek in about two seconds.”

Lance offered a smile, but it wasn’t a friendly one.

Maggie hesitantly made her way to him, hands clasped together and head tilted down. Lance usually liked skinny girls, but his body liked her curves well enough. Sixteen years old and recently initiated into the world of sex, he was eager to experiment with any and all kinds of the female population.

Stop thinking about sex before you embarrass yourself.

Her looks were unoriginal until she lifted those eyes, as she did then. He hated her eyes. They weren’t really brown—almost red in certain lighting, too big for her face, and framed with thick, long eyelashes that should be creepy but were instead pretty. Her eyes sank into him like they could see all of him. It made him uncomfortable.