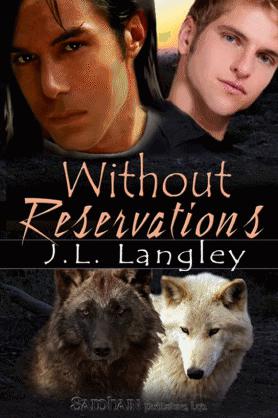 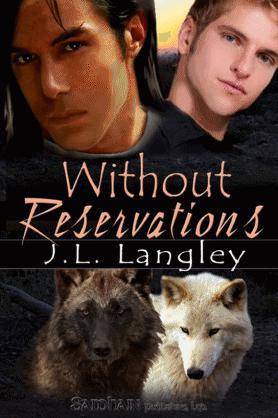 eBooks are
not
transferable. They cannot be sold, shared or given away as it is an infringement on the copyright of this work.

“
Brooom brooom…
Mommy, if I’m a wolf like daddy, why can’t I change into a wolf?”

Lena Winston looked up from her mixing bowl and smiled at her only son.

Chay had a toy car in each hand, his wide brown eyes staring up at her expectantly.

“Because you haven’t reached puberty yet, Chay.” She went back to stirring the chocolate cake batter.

Oops
, maybe she should have worded that differently. Lena turned, grinning at her mistake. Chayton was the most inquisitive child she’d ever known. Of course, he would ask that. “Umm, it means when you are older. A teenager.”

His little forehead wrinkled. The four-year-old sat quietly for several seconds then cocked his dark head. “Mommy, when am I going to be a teenager?”

She set the mixed batter on the counter and dug out a pan from under it. “In about eleven years, when you’re fifteen or so.”

Lena shook her head and poured the cake mix into the pan. “Chay, you are too smart for your own good. Yes, you will be a teenager then too.” She held out the mixing bowl and spoon toward the little boy. “Do you want to lick the bowl?”

The little boy sat so fast he practically rebounded when he hit the linoleum. Their dog Roscoe ambled into the kitchen, licked the boy across the cheek and flopped down beside him.

Lena set it between his outspread legs and handed him the spoon. “Try not to make a mess. I’m going to start on dinner while the cake is in the oven.”

Chay took the big plastic spoon and shoved the whole end of it in his small mouth. Cake mix oozed from the corners of his lips and spread across his nose and cheeks.

Determining that keeping him clean was a lost cause, she put the cake in the oven and proceeded to the pantry. She brought the spuds to the sink and began rinsing them when she heard slurping or…licking sounds? Without even turning around, Lena knew what was going on. “Chayton Montgomery Winston. What have I told you about sharing your food with the dog?”

“But, Mommy, Roscoe likes to lick the bowl too.”

Lena heard the dog’s toenails click on the linoleum as he left. She shook her head. The child thought absolutely nothing of letting the dog lick his spoon, and putting it back into his own mouth.
Yuck.

Lena turned the faucet off and dug through the drawer to find her potato peeler. “Yes, Chay?”

“How did you know Daddy was your mate if you aren’t a wolf? Daddy says that wolves know their mates when they meet them.”

“Well,
I
didn’t know, but your father did.” She started peeling potatoes. “You see, Chay, because your grandpa Matthew is a wolf, I grew up around wolves. Wolves don’t pick their mates, sweetie. God picks them. But when a wolf meets his mate he knows it. So, when your Daddy told me that I was his mate, I knew he was telling the truth. It was my destiny to be with him.” Lena smiled, thinking about her husband Joseph.

“She. And it’s a princess, honey, not prince,” Lena corrected automatically. Then what he said about hair and eyes sank in. She felt like someone sucker punched her. She took a deep breath and reminded herself that he was a child and didn’t know any better. “No, Chay. Your mate will be one of our people,
not
a white woman. She will have long beautiful black hair, brown eyes and lovely tanned skin. She may not be Apache, like I’m not—I’m Lakota—but she’ll be one of us.”

The spoon scraped the sides of the bowl a few more times. “But you said we don’t pick our mates, God does. How do you know that my mate won’t have hair like sunshine and eyes like the sky?”

Lena rolled her eyes and heaved a sigh. “Because God wouldn’t do that to us Chay.” She finished the last potato, turned toward the refrigerator and stopped dead in her tracks. “Chayton Montgomery Winston. What did I say about sharing with the animals?”

Chay’s eyes sparkled up at her. He glanced at the family cat that had cake batter all over her whiskers, then back to his mother. “You said not to share with Roscoe, Mommy. You didn’t say anything about Fluffy.”

Chay finished the stitch on Bitsy, Mrs. Preston’s cat. Only then did he look up at his receptionist. “Yes, Cheryl?”

“The game warden is here. He brought a wolf in and he wants to speak to you. He says it’s urgent.”

What in the world did Frank Red Hawk want? He normally dropped the wounded animal off and left. “Okay, I’ll be right there.” He smiled over at his veterinary assistant Tina. “Can you finish up here?”

Chay chuckled at her exuberance and stepped aside. Tina loved her job. She’d have done the entire surgery by herself if he’d let her.

He washed up and went into the reception area.

The game warden paced on the other side of the counter, worrying his bottom lip.

Crap.
Something must be really wrong. Chay walked around the counter.

Frank practically ran to him. He grabbed Chay’s shoulders and leaned in, whispering so only Chay could hear. “Chay, I brought you a wolf. One of your assistants put it in a room. But I need to talk to you.” He raised his eyebrow meaningfully and looked around. When his gaze landed on Cheryl, he cleared his throat. “Can we go into your office?”

“Sure. Right this way.” Chay led the older man into his office and shut the door. He crossed to his desk, propping his butt against the front of the big mahogany surface. “What happened, Frank?”

“The wolf is one of us, Chay. I was out this morning looking into a call about poachers. I found several shell casings before I heard a whine. There was a wolf lying in the shallow ravine just north of the packs’ marked territory. So, I ran back and got my tranq gun. I shot it before I realized it was a werewolf. But the thing is, Chay, the wolf isn’t pack. The wolf is white. I mean the fur…it has white fur and is really small…maybe a teenager.”

Chay pinched his bottom lip between his thumb and index finger. “Why didn’t the poachers take the body?”

Frank shrugged. “I don’t know. Probably got scared off would be my guess.”

“What condition is the wolf in now?”

“It’s a head wound, but doesn’t appear too serious. I didn’t see a bullet. It looks like a nick. You know how bad they bleed, but it doesn’t look to have gone very deep. I’m pretty sure it didn’t penetrate the skull, but I suspect there’s enough blood loss to make it difficult to shift back.”

Chay nodded. That made sense. It could also be disorientation though. Changing to human form would heal the wounds, but a blow to the head would cause confusion and one needed focus in order to shift back.

Frank leaned on the black leather chair in front of Chay’s desk, gripping the upholstery so tight his knuckles turned white. “I’m going straight to the rez police from here. Afterwards I’ll go report it to John Carter.”

Chay nodded. John Carter was their pack leader. He had to be told of such things. “Yeah, you do that. I don’t like the sounds of this. We damned sure don’t need poachers on pack land. The fact that last night was the full moon makes it even more disturbing.”

“Yeah, that was my reaction too.”

“All right. I better go check on my new patient.” Chay pushed away from his desk and offered his hand to the warden.

Frank shook it. “Thanks a lot, Doc. Let me know how our little patient fares.”

“Will do, Frank.” Chay opened the door, showing Frank out. He stopped at the reception counter. “Cheryl, where is the wolf the warden brought in?”

“Exam room four, Dr. Winston. Tommy put a muzzle on it, but it’s pretty out of it, so I doubt it needed it.”

“Bob McIntyre called and wants you to go out to the rez and check on his new mare. He says he thinks she might be pregnant.”

He nodded and glanced at his watch. It was almost noon. Today was his short day so he’d be getting off at twelve-thirty. He glanced at the empty reception area and back at Cheryl. “Do we have any appointments?”

She looked down at the open book in front of her. “No. We’re done unless someone else comes in.”

“Okay. Go ahead and flip the closed sign and call Bob. Tell him I’ll be out on my way home.”

Chay left the reception area. He had a wolf to check on.

Tina stepped out of the surgery room as he rounded the corner. “Hey Chay, Bitsy’s in recovery.”

Chay gave her a high five. “Good deal, Tina. You can leave for the day. But first, will you go give Mrs. Preston a call and tell her that Bitsy is fine and she can pick her up tomorrow morning?”

Tina winked and jogged off toward the reception area. “You got it, Chay. See you tomorrow.”

She spun around so quick her dark ponytail swung into her eyes. She blinked and brushed her hair back. “Yes?”

“Don’t forget you have the five o’clock and midnight shift tonight to come check on the animals.”

“Gotcha. You coming back up here tonight?”

“Yeah, I’ll swing back by at three-thirty and eight, since we had three surgeries today, but Tommy is going to stay up here all night.”

“Later, Tina.” He grinned at her retreating back and continued down the hall to exam room four.

Passion in Paris by Ross, Bella
The Tombs (A Fargo Adventure) by Perry, Thomas, Cussler, Clive
Shattered (Alchemy Series Book #3) by Augustine, Donna
Saved by Jack Falla
This Way Out by Sheila Radley
My Favorite Countess by Vanessa Kelly
Demons Prefer Blondes by Sidney Ayers
Death Before Decaf by Caroline Fardig
The Devil's Footprint by Victor O'Reilly
The Queen of Sparta by Chaudhry, T. S.