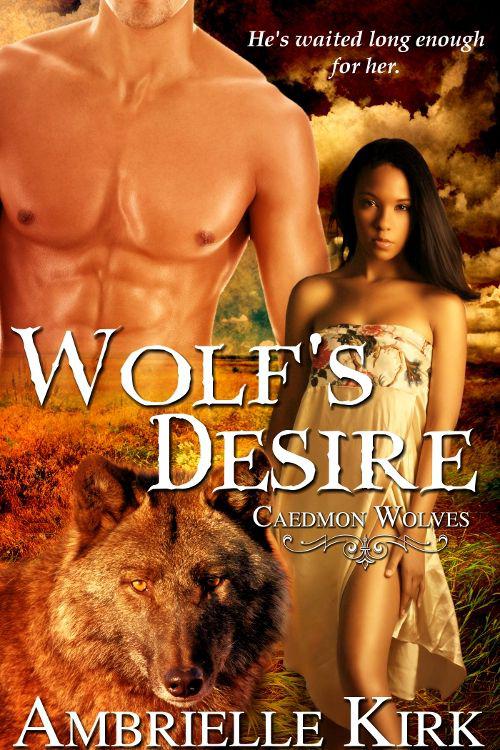 Wolf's Desire (Caedmon Wolves, 4)
When Keira becomes a widow, she realizes that the life she once had wasn’t normal after all. After her husband is brutally murdered, she is more than just alone but vulnerable to threats and tangled in a web of greed. Her decisions lead her into a corner, and safety is jeopardized.
Aiden, Caedmon Council member, has never failed when it comes to fulfilling the terms of his employment contract. When he is hired to protect
an heiress, he doesn’t plan on her being the only woman to bring both challenge and purpose in his life. Without hesitation, he vows to keep the grieving Keira safe—even from himself.
Keira trusts Aiden unconditionally and finds joy whenever they are together, but can love transcend a tragedy? Aiden’s urge to protect her is just as great as his desire to claim her. Once the passion is unleashed and fueled by the need to have all of her, the wolf will accept nothing less than his mate.

All rights reserved. No part of this publication may be reproduced, stored in a retrieval system, or transmitted in any form or by any means, electronic, mechanical, recording or otherwise, without the prior written permission of the author.

This is a work of fiction. The characters, places, incidents, and dialogues in this book are of the author’s imagination and are not to be construed as real. Any resemblance to actual events or person, living or dead, is completely coincidental.

The future is ours to channel when we embrace change.

“The man who killed your ex-husband was found dead last week.”

Keira
slowly lifted her gaze to meet the solemn stare of the two lawyers before her. Mr. Echols, the one with a mass of gray curly hair and large bifocals, presented the memo to her with the words closed-case stamped across it. The other was younger and likely an apprentice. His hair was brown, and slicked back with loads of gel. Both of them eyed her in anticipation like hawks.

“Did you hear what I just said? The investigators are closing his case
,” Mr. Echols repeated, more sternly this time.

She heard him loud and clear, but the news only caused
her heart to tighten in anguish, leaving her speechless.

Jamison
, her late ex-husband, had only hired these lawyers several months before his death. She’d remembered it, because there’d been a huge disagreement with him and the previous ones. The details that led up to the end of that relationship was not made known to her. Shortly before he fired them, he’d run into a world of problems—financial and otherwise. He’d been in a terrible rut trying to fix the mess, but unexpectedly ran out of time.

I
n such a short time span, the new lawyers could not have known her husband all that well. Jamison had been dead before Mr. Echols and his apprentice earned their third retainer fee.

She swallowed
. “How do they know they’ve found his killer?”

“They have DNA and solid physical evidence lin
king this man to the crime,” Mr. Echols pushed the open portfolio in front of her containing a mug shot of a man with a grisly beard. “He also fits the description you gave to the cops that night.”

If she should’ve recognized him at first glance, she didn’t. A year had passed since that unfortunate night, and even back then when the events were still fresh in her memory she couldn’t paint a clear enough picture of anything.
Plus, reliving the tragedy caused her grief, and so she’d forced herself to subdue the memories by passing the time with other matters.

“People make mistakes. Everything happened so quickly. I could have missed something important about the man’s description,” she said.

Mr. Echols shook his head. “We can’t rule out the incriminating evidence found at the scene of the crime. Jamison Ellis’ family has accepted his passing. His brother, Jonathan, has agreed that it’s about time the case has been officially closed.”

“What?” She pounded a fist on the table. “His brother is only concerned with liquidating all assets and properties as quickly as possible. They’
ve made it absolutely clear they no longer want me to handle any aspects of the family business.”

“That’s another matter. A business matter…a
nd none of our concern,” he said, carefully and softly.

She lifted an eyebrow. “But don’t you think it’s a little suspicious…that they want me out of the picture
all of a sudden?”

A corner of Mr. Echols mouth
lifted to one side, and his apprentice sat up in the chair. “Are you accusing them of something, Miss Ellis?” When she didn’t say anything, Mr. Echols continued. “We see this all the time, ma’am. Husband dies tragically. The family business that everyone once relied on is up in shambles. Widow is paid a healthy sum of money on top of her inheritance to get the hell out of dodge. Nothing new there. The Ellis’ just want to start with a clean slate.”

“
They can have the business. I want nothing to do with it. I wouldn’t know how to run it anyway. But I’m not getting the hell out of anywhere until I find out why Jamison was murdered?”

“You’re young, Miss Ellis. Don’t be
a fool.
Move on with your life—while you still have it.
”

The room was
dead silent as Keira contemplated his warning.

His advice should have been heeded, but she knew that something wasn’t right about the way her husband died and how everyone, including his own
father and brother, wanted to sweep all evidence under the rugs so they could be done with it.

It would have been easier, safer for her to pack her bags and start a new life elsewhere. And she would. Someday soon, she hoped she would. But not without finding closure to this one.

“I’m not crazy, but everyone seems to think I am.” Keira’s voice trembled with irritation as she spoke. “More than one man was responsible for Jamison’s death. Closed cased does not mean solved case.”

Mr. Echols
looked over the rim of his bifocals with uncaring eyes. “Miss Ellis, these investigators are highly trained and work murder cases like these day in and day out. From the beginning, no one could corroborate your story about an animal mauling him to death.”

“So, it’s been decided…?”
She balled her hands into fists, and heat flashed across her chest. “One of my husband’s killers goes free because the investigators failed to do their jobs.”

“You expect them to prosecute this wild animal you speak of?”

“I expect them to do their job and perform a thorough investigation.” A sharp pain sparked in her head, and she balled her hands into fists at her sides.

“Even if they found the one animal responsible for killing your husband as you claim, what can they do? Put it in the pound?” His thick eyebrows drew closer together. “For goodness sakes,
the prime suspect is dead. Why are you so hell-bent on pinning someone else with the crime? Why do you want to poke your nose where it does not belong? It is to your advantage that this case is closed. Don’t you want to move on with your life? For the longest, you were a suspect. Do you really want them to re-open this?”

In the
beginning, they’d accused her of plotting to have her husband murdered and then assisting with the attack. That claim had been shot down quickly, but not due to lack of evidence.

She was innocent
. Very few believed her. They claimed that her money had bought one of the best defense lawyers in the country, which in turn resulted in her dismissal as a suspect in Jamison’s death.

“What are you saying, Mr. Echols? Do you still believe I murdered him?”

“I’m advising you to leave this be.”

“They don’t have to believe me.
I’ll hire a private investigator of my own. One that will do the job.” She pushed her chair back form the table. “Thank you for your time. Good night.”

Their
expressions only showed the smallest hint of surprise. Did they think she would have given in so easily? She knew what she saw that night, but no matter how many times she verbally recounted the events over and over to the lawyers and investigators alike, no one appreciated her two cents.

Keira,
listen to yourself. Jamison is dead. No one can help him now. No one will help you.

“Very well.” Mr. Echols tucked the
portfolio and memo back into his briefcase, and rolled up his sleeves. “If you need assistance finding an investigator, we have many referrals. I hope you rethink this before it’s too late.”

S
he trusted no one. “I don’t need the assistance, thank you.”

Keira
was tempted to fire the lawyers on the spot. Obviously, they never had her or her husband’s best interests in mind. She was slowly beginning to understand that very few did. His death had thrown everyone for a loop, and now she was left alone to tie the loose ends back together. But no seemed to want her to.

Suddenly, a wave a nausea flooded over her and she gripped at the edges of the ta
ble as her knees turned to putty. A maid rushed to Keira’s side to assist her and handed her a glass of water.

She took a sip, and then direct
ed her gaze on the lawyers. “It’s time for you two to leave.”

Before either of them could interject, she turned, tightened her
night robe around her torso and headed for bed. Her stomach grumbled in protest, reminding her that she hadn’t eaten since early afternoon. There was no use when everything seemed to taste of cardboard.

Her tired body protested more than her belly did, and soon she was
curled up under the cozy blankets on the daybed in the library. Today had been the one year anniversary of her husband’s death and still she found herself clueless and alone.

Just as Keira was getting ready to drift off to sleep, something scratched just outside t
he window to the left of her. She lifted her head slowly and peered at the darkened shadows on the walls. Something scraped across the glass again, but this time, she only caught sight of tree branches brushing against the window. A tingle prickled up her spine even though she was under the warm comforts of her blanket. Glancing around the room once again, she made sure she didn’t miss anything out of place.