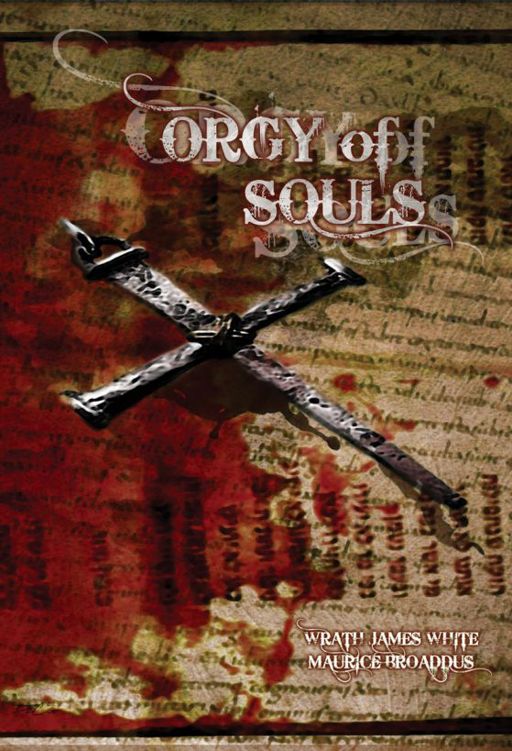 --James A. Moore, author of DEEPER and CHERRY HILL

This collection is a work of fiction. All the characters and events portrayed in these stories are either fictitious or are used fictitiously.

All rights reserved, including the right to reproduce the book, or portions thereof, in any form.

I would like to thank my wife, Christie, and my son, Sultan, and my daughters, Isis and Nala, who put up with me every day while I chase the dream of being a successful writer. And, of course, Maurice.

I would like to thank my wife, Sally, and my sons, Reese and Malcolm, for their patience with my mood swings and sacrifice of time while I continue to serve my muse. Also the Indiana Horror Writers, Kelli Dunlap, and Chesya Burke for their continued support. And a special “thank you” to my hardworking and underpaid message board moderators, Lauren David and Ro Griffin. And, of course, Wrath.

We would also like to thank all the past and present members of the Maurice Broaddus message board: Levitepriestess, Green 19, Marc Dav, Mark Johnson, Dougdubyou, Harley, Sheryl, Crystal, and Ron. Without you and your example of how conversations could be had, this probably wouldn’t have happened.

I was asked in an interview once whether or not my religion kept me from writing about certain things. In general it doesn’t because I think anything can be written about, and it’s the skill of the writer that crafts the story told. There are times when I can’t get to a certain place that a story or character needs to go. In times like that, it’s good to have friends to call on, friends like Wrath James White.

For people who know the two of us, that never ceases to amuse them. We have very little in common; in fact, beyond being bald, black writers, we are polar opposites. Our writing styles, our lifestyles, our politics, our worldviews, our spiritual perspectives. He writes for those with “a taste for the violent, the erotic, the blasphemous,” while I write introspective, atmospheric stories. He’s a hedonistic humanist and I’m a Christian, the facilitator (a nebulous title coming from the Greek meaning “we don’t want to keep explaining to the congregation that one of the church leaders is a horror writer”) at a church called The Dwelling Place.

Our friendship revolves around our mutual respect for one another. We are able to have conversations on some of the prickliest of topics because we listen to one another, we’re not interested in converting one another, and we are genuinely interested in seeing how the other person comes at things, even if we don’t agree. We’re also both intrigued by the idea of faith.

I don’t know much for sure, which allows me to learn from everyone. I can guarantee that the path and ways that I follow in my spiritual journey are going to look different than anyone else’s. I'm certainly not afraid of questioning or going through a period of doubt. Faith includes doubt. God is big enough for us to question, doubt, and wrestle with. In fact, He expects us to. The opposite of faith isn’t doubt, it’s certainty. Finding faith is like falling in love. There is an element of mystery to both, and let’s face it, in any proposition, we’re uncomfortable with mysteries, the “I don’t knows.” There are times while we are falling in love when we feel like we have been chosen and times when we choose to do it. Let me tell you, when I’ve fallen in love (each and every painful time), it has caught me off guard and swept me up.

Samson glided through the dance club, the pounding bass a second heartbeat in his chest, his body bouncing slightly, almost imperceptibly in time with the rhythm. His eyes sparkled with lust as he gazed across the dance floor at a sea of sweltering, undulating flesh. He wanted to make love to the entire room, the entire building, the whole faceless mass of humanity. No one person stood out from the next. They were all the same to him, neither male nor female. Only flesh. And he couldn’t wait to throw himself among them, to feel the press of their bodies against his, their smooth skin, slicked with perspiration, sliding against his own. He popped another tablet of Ecstasy and his flesh began to tingle. This was his element. People waved to him, shook his hand, patted him on his back, hugged him, and gave him the occasional pound and kiss. There were few people he didn’t know. He’d been a bouncer here once upon a time, and he’d recently done a stint as a guest DJ on Friday nights. Then his modeling career had taken off and he’d quit his job at the club, but the lights, the music, and the women still drew him. Just another patron on the prowl for someone to swap body fluids with.

A sprightly Polynesian woman charged off the dance floor straight towards him. She had long black hair that curled slightly, thick heart shaped lips, slanted eyes with long lashes, dimpled cheeks, and a huge smile that seemed almost electric beneath the flashing colored lights. Though probably no more than five-foot-three inches tall, her body was amazing. She had a thin waist above wide, curvaceous hips squeezed into a mini-skirt that revealed her smooth muscular cinnamon brown legs. She wore a baby t-shirt that exposed her midriff, revealing the beginnings of a six-pack. The t-shirt itself was stretched almost to bursting by breasts that seemed disproportionately large for her diminutive frame. They were at least a D cup and natural from the way they bounced and wobbled as she made her way toward him.

She smiled at him waiting for him to respond with her name. Instead he gathered her into his arms and hugged her. Then he took a chance and kissed her, a deep soulful kiss that sucked the breath from her lungs.

“Wow. I guess you do remember me.”

“I have to confess. I can’t remember your name but I could never forget your beautiful face.”

“My name is Tara. We met here a year ago on Memorial Day weekend? I was on spring break?”

Samson smiled and shook his head, still unable to place her.

“We went out for breakfast after the club and then back to your apartment and we spent all night in bed until the next morning.”

There were a hundred women who could have approached him with the same story. The only difference would have been the date. True, most of them were not half as beautiful as Tara. He gathered her into his arms again, pulling her close to whisper into her ear.

“Do you want breakfast now?”

“Not at all. Not for food anyway.”

“I was thinking the same thing. You want to come to my place this time? I live here now. I just graduated last month and decided to move to San Francisco. I had so much fun here when I came for spring break. I had so much fun with you. I can’t believe I ran into you again.”

“I’m glad you did.” Samson smiled.

His smile was one of the things that had landed him his first modeling job. His teeth were bright white and contrasted starkly against his mocha complexion. He had unusually European features for an African American. His nose was small and narrow, almost pointy, and his lips were full but not exceptionally so. His high cheekbones, startling green eyes, and strong angular jaw gave him the look of a matinee idol. His hair was curly and kept short and neat, shaved close on the sides with the top gelled and moussed into a stylish coif. If ever the word “pretty” could be used in reference to a man, Samson was that man.

Samson followed Tara out of the club, lingering behind to watch the bounce and sway of her tight, though large and well-rounded, posterior. Physically she was everything he could ever want in a woman.

“You know, I saw an ad in a fashion magazine with your picture in it. I had no idea you were a model. My girlfriends thought I was lying when I showed them your picture and told them I knew you.”

Tara continued to ramble on and on as Samson smiled and nodded his head, barely hearing a word. He stared at her beautiful, flawless body and thought only of her immortal soul, wondering if it was as lovely as the flesh that clothed it.

She would be his first.

Father Samuel turned the pages of his breviary, his eyes moving across the hymns and prayers, his mind adrift on waves of distracted thoughts. It was as close to prayer as he allowed himself these days. Huddled in the corner of a pew in the sanctuary chapel, he escaped to the nearest thing to solitude that Our Lady of Mount Carmel had to offer as he prepared to say Mass.

Some days were easier for Samuel than others. There were days when his faith made perfect sense to him. Christ dying on a cross as a sacrifice reconciling man and God. The Bible being God’s inspired Word, instructing man on how to draw closer to Him, no matter what century he lived in. The Holy Spirit speaking to man, comforting him in his dark times.

Christ was some loon running around claiming to be God and was strung up for his efforts. The Bible was a collection of books men chose in order to maintain their power and grip on people. The Holy Spirit was his imaginary friend who remained silent when it counted most.

Samuel dry-swallowed his pills though he was tempted to wash them down with wine.

“Samuel?” Father Glenn tapped him on his shoulder. A short, bulbous man with a jowly face punctuated by a large nose, Father Glenn managed to sneak about the chapel without making a sound. “You’re up.”

“I know, I know.” Samuel closed his breviary and stood up, fighting a swell of nausea. “Shoot you for it.”

“I’ll take the next month’s worth of confessions.” A lot of old women prone to complaint numbered among the faithful of Our Lady of Mount Carmel. They came to the confessional more for the company and conversation, gossiping by way of confessing.

Liar by Francine Pascal
First to Burn by Anna Richland
The Lost Salt Gift of Blood by Alistair Macleod
On Strike for Christmas by Sheila Roberts
Fire Always Burns by Krista Lakes
The Starkin Crown by Kate Forsyth
For Better For Worse by Pam Weaver
Prince of Demons 2: The Order of the Black Swan by Victoria Danann
The Diamond Thief by Sharon Gosling
Never Doubt Me by S.R. Grey