Read Written on the Body Online

Written on the Body 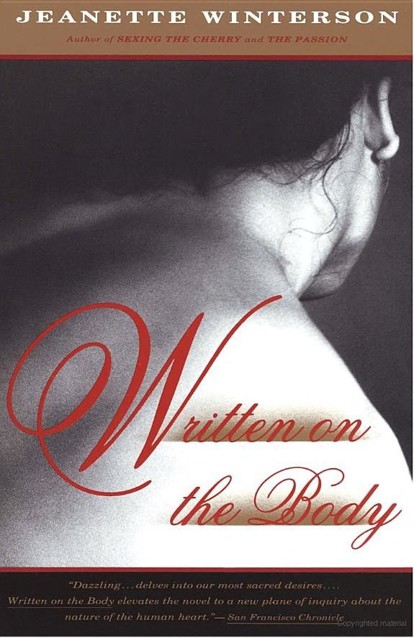 Written on the Body

“Arresting … a lush story of passion … an affirmation of the freedom to cast off all prescriptions: social, moral, existential, sexual—and in the writing—aesthetic and literary. We are cut off from our assumptions and groomed to enter Winterson’s unsettling polymorphous world.”

“Winterson’s skill with fable and fantasy is not just brilliant plumage in this book.… [Her] representations of desire go far beyond male/female; she moves past all dichotomies into a register of sexual imagery where the body is weapon, flora, fauna, weather, animal, geography, prison, food, light, nest, jagged edge: it is the body as whole world. In this novel she found the spot where the Great Chain of Being breaks and none of us know what will become of us, or where we fit.”

“Brilliant … Stunning passages of romantic rapture [and] anguished tenderness.
Written on the Body
takes on a certain cinematic splendor.”

“A bold, controversial new novel … the story of a white hot passion. [Winterson] is regularly singled out as the most talented writer of her generation.”

“This is a story of the heart, a foray into the emotional imagination. The language [is] elegiac, passionate, reverential, with echoes of the Song of Solomon. Moving and compassionate, a love letter as much as a love story.”

“A knockout … sexual ecstasy is described with surreal sensuality. Fascinating [and] unforgettable. Winterson writes about the state of passion, casting an obsessed eye on the body, mapping its every detail and secret place. Winterson is an exciting writer. She has literary talent of a high order.”

“A serious display of literary talent. Winterson broods entertainingly about passion, loyalty, beauty, disease, and decay in a language that draws on Donne, Shakespeare, snippets from anatomy texts, and her own unabashed sexiness. A tour de force, with bravado and heart.”

“Intense … an anatomy of sexual love: Winterson takes an interest in the physiology of love, in the ways it makes the body feel and change, in the body’s centrality to love. She is a scintillating writer, witty, inventive with language.”

for Peggy Reynolds with love

My thanks are due to Don and Ruth Rendell whose hospitality gave me the space to work. To Philippa Brewster for her editorial inspiration. To all those at Jonathan Cape who have worked so hard to produce this book.

The Cells, Tissues, Systems and Cavities of the Body

Why is the measure of love loss?

It hasn’t rained for three months. The trees are prospecting underground, sending reserves of roots into the dry ground, roots like razors to open any artery water-fat.

The grapes have withered on the vine. What should be plump and firm, resisting the touch to give itself in the mouth, is spongy and blistered. Not this year the pleasure of rolling blue grapes between finger and thumb juicing my palm with musk. Even the wasps avoid the thin brown dribble. Even the wasps this year. It was not always so.

I am thinking of a certain September: Wood pigeon Red Admiral Yellow Harvest Orange Night. You said, ‘I love you.’ Why is it that the most unoriginal thing we can say to one another is still the thing we long to hear? ‘I love you’ is always a quotation. You did not say it first and neither did I, yet when you say it and when I say it we speak like savages who have found three words and worship them. I did worship them but now I am alone on a rock hewn out of my own body.

Love demands expression. It will not stay still, stay silent, be good, be modest, be seen and not heard, no. It will break out in tongues of praise, the high note that smashes the glass and spills the liquid. It is no
conservationist love. It is a big game hunter and you are the game. A curse on this game. How can you stick at a game when the rules keep changing? I shall call myself Alice and play croquet with the flamingoes. In Wonderland everyone cheats and love is Wonderland isn’t it? Love makes the world go round. Love is blind. All you need is love. Nobody ever died of a broken heart. You’ll get over it. It’ll be different when we’re married. Think of the children. Time’s a great healer. Still waiting for Mr Right? Miss Right? and maybe all the little Rights?

It’s the clichés that cause the trouble. A precise emotion seeks a precise expression. If what I feel is not precise then should I call it love? It is so terrifying, love, that all I can do is shove it under a dump bin of pink cuddly toys and send myself a greetings card saying ‘Congratulations on your Engagement’. But I am not engaged I am deeply distracted. I am desperately looking the other way so that love won’t see me. I want the diluted version, the sloppy language, the insignificant gestures. The saggy armchair of clichés. It’s all right, millions of bottoms have sat here before me. The springs are well worn, the fabric smelly and familiar. I don’t have to be frightened, look, my grandma and grandad did it, he in a stiff collar and club tie, she in white muslin straining a little at the life beneath. They did it, my parents did it, now I will do it won’t I, arms outstretched, not to hold you, just to keep my balance, sleepwalking to that armchair. How happy we will be. How happy everyone will be. And they all lived happily ever after.

It was a hot August Sunday. I paddled through the shallows of the river where the little fishes dare their belly at the sun. On either side of the river the proper green of
the grass had given way to a psychedelic splash-painting of virulent Lycra cycling shorts and Hawaiian shirts made in Taiwan. They were grouped the way families like to group; dad with the paper propped on his overhang, mum sagging over the thermos. Kids thin as seaside rock sticks and seaside rock pink. Mum saw you go in and heaved herself off the stripey fold-out camping stool. ‘You should be ashamed of yourself. There’s families out here.’

You laughed and waved, your body bright beneath the clear green water, its shape fitting your shape, holding you, faithful to you. You turned on your back and your nipples grazed the surface of the river and the river decorated your hair with beads. You are creamy but for your hair your red hair that flanks you on either side.

You stood up and the water fell from you in silver streams. I didn’t think, I waded in and kissed you. You put your arms around my burning back. You said, ‘There’s nobody here but us.’

I looked up and the banks were empty.

You were careful not to say those words that soon became our private altar. I had said them many times before, dropping them like coins into a wishing well, hoping they would make me come true. I had said them many times before but not to you. I had given them as forget-me-nots to girls who should have known better. I had used them as bullets and barter. I don’t like to think of myself as an insincere person but if I say I love you and I don’t mean it then what else am I? Will I cherish
you, adore you, make way for you, make myself better for you, look at you and always see you, tell you the truth? And if love is not those things then what things?

August. We were arguing. You want love to be like this every day don’t you? 92 degrees even in the shade. This intensity, this heat, sun like a disc-saw through your body. Is it because you come from Australia?

You didn’t answer, just held my hot hand in your cool fingers and strode on easy in linen and silk. I felt ridiculous. I was wearing a pair of shorts with
RECYCLE
tattooed across one leg. I remembered vaguely that I had once had a girlfriend who thought it rude to wear shorts in front of public monuments. When we met I tethered my bike at Charing Cross and changed in the toilets before meeting her by Nelson’s Column.

‘I’ve got two,’ she said and kissed me. Wrong to seal illogic with a kiss but I do it myself all the time.

You didn’t answer. Why do human beings need answers? Partly I suppose because without one, almost any one, the question itself soon sounds silly. Try standing in front of a class and asking what is the capital of Canada. The eyes stare back at you, indifferent, hostile, some of them look the other way. You say it again. ‘What is the capital of Canada?’ While you wait in the silence, absolutely the victim, your own mind doubts itself. What
is
the capital of Canada? Why Ottawa and not Montreal? Montreal is much nicer, they do a better espresso, you have a friend who lives there. Anyway, who cares what the capital is, they’ll probably change it next year. Perhaps Gloria will be at the swimming pool tonight. And so on.

Bigger questions, questions with more than one answer, questions without an answer are harder to cope with in silence. Once asked they do not evaporate and leave the mind to its serener musings. Once asked they gain dimension and texture, trip you on the stairs, wake you at night-time. A black hole sucks up its surroundings and even light never escapes. Better then to ask no questions? Better then to be a contented pig than an unhappy Socrates? Since factory farming is tougher on pigs than it is on philosophers I’ll take a chance.

We walked back to our rented room and lay on one of the single beds. In rented rooms from Brighton to Bangkok, the bedspread never matches the carpet and the towels are too thin. I put one underneath you to save the sheet. You were bleeding.

We had rented this room, your idea, to try to be together for more than dinner or a night or a cup of tea behind the library. You were still married and although I don’t have many scruples I’ve learned to have some about that blessed state. I used to think of marriage as a plate-glass window just begging for a brick. The self-exhibition, the self-satisfaction, smarminess, tightness, tight-arsedness. The way married couples go out in fours like a pantomime horse, the men walking together at the front, the women trailing a little way behind. The men fetching the gin and tonics from the bar while the women take their handbags to the toilet. It doesn’t have to be like that but mostly it is. I’ve been through a lot of marriages. Not down the aisle but always up the stairs. I began to realise I was hearing the same story every time. It went like this.

A bedroom. Curtains half drawn. Bedclothes thrown back. A naked woman of a certain age lies on the bed looking at the ceiling. She wants to say something. She’s finding it difficult. A cassette recorder is playing Ella Fitzgerald, ‘Lady Sings the Blues’
.

Ghosting by Edith Pattou
Apocalypse Of The Dead by McKinney, Joe
Life on Wheels by Gary Karp
Forsaken by the Others by Jess Haines
Confessions of a Virgin Sex Columnist! by Kay Marie
Dorothea Dreams (Heirloom Books) by Suzy McKee Charnas
Going Down in La-La Land by Zeffer, Andy
A More Deserving Blackness by Wolbert, Angela
Banished by Liz de Jager
The Last Time I Saw You by Elizabeth Berg