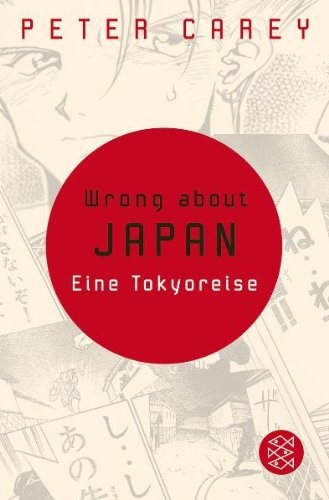 “A fascinating outsider’s perspective on Japanese manga and anime.”

“Humorous and touching…. The beauty of this writing is in its openness and wit, its variety and sense of adventure.”

“It is the sheer lack of pretension that makes this understated account of travel so illuminating.”

“What emerges is a loving father’s abiding interest in the fascinating creature who happens to be his son as [they] experience the challenges and rewards of attempting to fathom a very different society made up of people who are, at heart, not so very different from us.”

“Like any good tour guide, Carey leaves you wanting more.”

“A cult interest in the west, [anime and manga] are apparently the cultural coin of the realm in Japan, and the author got an eye-opening education in what it all means.”

“This is quietly elegant prose, [and] the byways of information that Carey can take us down are fascinating.”

Peter Carey is the author of eight novels, including the Booker Prize-winning
Oscar and Lucinda
and
True History of the Kelly Gang
, and, most recently,
My life as a fake
. Born in Australia in 1943, he now lives in New York City.

My life as a Fake

True History of the Kelly Gang

The Unusual Life
of Tristan Smith

The Fast Man in History

FOR BOTH MY SONS, WITH ALL MY LOVE

I was at the video shop with my twelve-year-old son when he rented
Kikujiro
, a tough-guy/little-boy Japanese film whose charming, twitching hoodlum is played by an actor named Beat Takeshi. How could I have known where this would lead?

Over the next few weeks Charley rented
Kikujiro
a number of times, and although I was with him when he did so I had no idea how powerfully he’d been affected, not until he said, quietly, en passant, “When I grow up I’m going to live in Tokyo.”

Charley is a shy boy, and later I wondered if he had glimpsed a country where his own character might be seen as admirable. Whether this was true or not, his silent passion for Japan soon broadened, inflamed not only by
Kikujiro
but a whole range of other stimuli. I don’t mean that he lay in bed at night reading Tanizaki or Bashō. That would finally be my fate. He was twelve years old. It was the year before Iraq, before he discovered punk rock, NoFX, and Anti-Flag. He and his friends skateboarded. They had Xboxes and GameCubes and PlayStation 2s, and although he read for half an hour a night, he set the timer for exactly thirty minutes and closed the book the instant that it rang. What he then picked up were English translations of Japanese comic books.

These came from stores inhabited by pimply youths sporting green hair and staples in their heads. Forbidden Planet is on lower Broadway, walking distance from our house, and I would accompany him there on Saturday mornings.

Although I knew that Japanese comics were
called
manga
, I would have said that a comic was a comic no matter what you named it. At Forbidden Planet I slowly began to understand that I was wrong. The first and most obvious difference in Japanese comics is the broadness of subject matter, from saccharine stories featuring little big-eyed girls to the dense and serious works of Osamu Tezuka, although this is not something one discovers in a single Saturday morning. What was immediately obvious was the startlingly graphic nature of manga which, in its clarity of line and dramatic blocky forms, echoed the Japanese wood-block prints of the nineteenth century.

Charley and I were soon drifting uptown where, around Grand Central, we found places where the entire English language had been vaporised. Here, in stores catering to Japanese exiles, the graphic nature of manga was more dramatically apparent. Gone were the wordier English translations. Instead, we saw bold hieroglyphics stamped with two or three characters that could be read, although not by us, as unthinkingly as a traffic light.

Charley soon became interested in a comic-book series called Akira—although a comic book is a skinny little thing, whereas a manga has an altogether different heft. Akira would finally run to six volumes with one-inch spines, and I remember how
we walked for mile after weary mile in search of a store where the punk-faced slackers might have finally unpacked what we both knew was in their basement: freshly delivered cartons of Akira #6.

Sometimes I was the censor but more often was delighted by artists I never would have discovered if not for my preternaturally tall, crew-cut son. While I never read Akira as attentively as he did, I looked closely enough to understand that it dealt with motorcycle gangs in Neo-Tokyo many years after an atomic devastation. Akira was the name of an immense, malevolent apocalyptic device or person—both, actually—that still lay dormant at the centre of the city. On Akira’s graphic pages I found images so artful that I could imagine hanging them on my wall.

Akira, born as manga, had also been made into an animated film which, being Japanese, is not called a cartoon but an anime. It is easy to see why this form should deserve its own label, although less easy to explain why the name is French. Certainly it differs from American animation, which has usually been—with some spectacular exceptions—a dumbed-down form. In America, cartoons are thought to be for kids. In Japan, anime is as much respected as live-action films, and not at all limited to a specific age group. The first anime I saw was
based on Akira, and I was immediately struck by the artistry of the frames, their combination of realism, exaggeration, something ineffably and inarguably “Japanese.” Once I got hold of a subtitled version and was therefore able to escape the cute Hollywood dubbing, I was at home in a strange, intriguing land. I was as hooked as Charley. I wanted more.

Of course some anime are original, some are shallow, and many are downright silly, but even the really silly ones soon began to seem like artifacts worthy of cultural investigation. For instance, a Japanese clog is called
a geta
and it usually sports two of those devices, which I can only call a “heel”—one at the place its name would lead you to expect, the other at the toe. Why then was that warrior in the anime wearing a clog with just one crazy little stilt, neither at the heel or toe, but at the balance point of the clog? This must mean
something
, even in a silly doodle. I found a reference to the strange clog in Bashō. It didn’t solve the mystery, but I began to develop the first of my many misunderstandings, imagining that Bashō’s ascetic rural Buddhists wore these clogs because it made walking more difficult. So as my son read manga and glued himself to anime, I began to wonder if we might enter the mansion of Japanese culture through its garish, brightly lit back door.

Later I solved the “heel” puzzle when we talked to a venerable clog maker in Tokyo. “Ah,” he said, “you mean a ‘one tooth.’ “He then explained that a “one tooth” was easier and safer to use in uneven mountain terrain; it was easier, not harder, to walk on.

In any case, I began encouraging Charley to puzzle at the information hidden within manga and anime, and particularly to wonder about what all those foreign characters were doing there. I already knew that the Japanese word
gaijin
, politely translated as “foreigner,” literally meant “barbarian.” So what did those plentiful foreign characters sound like to a Japanese ear? What sort of accents might these barbarians have? What might their voices signify?

Each night Charley had his thirty minutes of reading literature, but when the timer rang he instantly put down
To Kill a Mockingbird
and picked up Akira. By the time he was into Akira #6, I was reading William Heine’s
With Perry to Japan
, Commodore Perry being, of course, the most famous gaijin of them all, the American who “opened up” Japan to trade in 1854.

I interrupted my son’s readings to show him the illustrations in my book: nineteenth-century Japanese woodcuts of Perry’s big-nosed foreign face. I did not tell him that this nose, in Japanese, meant
the gaijin had a very large penis. My point was that these illustrations—given their line, their exaggeration—would have been right at home in a manga. In other words, the high and the low, the historic and the modern, were built on the banks of the same river. As we continued to find these connections, it was only natural that we were soon chatting about the impact of foreigners on Japan, from Perry to MacArthur, not excluding Hiroshima and Nagasaki.

Charley brought home the famous manga about Hiroshima,
Barefoot Gen
. Not to be outdone, I unearthed Studio Ghibli’s masterly anime about the firebombing of Tokyo,
Grave of the Fireflies
. If this was pop culture, it was also art and history, and our conversations took an interesting swerve. Coming back from Brooklyn after school one day, my son wondered if I thought the A-bombs would have been dropped had Commodore Perry just stayed at home.

Who knows? Maybe not.

In that case, Charley concluded, there would be no Godzilla.

He wasn’t being heartless or trivial. Godzilla had always been a self-conscious Japanese response to the horror of Hiroshima. The monster
was
the bomb.

The kid who would never talk in class was now brimming with new ideas he wasn’t shy to discuss. I
was excited by him and for him; and for myself too, because I’d already visited Japan twice and now realised I had a perfect pedagogic rationale for indulging my interests further.

“Would you like to go to Japan?” I asked.

“I thought you’d be excited.”

His lips flickered and he lowered his eyes. “Not if I have to see the Real Japan.”

This alluded to a story I thought he had long forgotten, about an earlier trip I made to Tokyo with my friend Fremantle Jack. While neither of us had been to Japan before, if one of us was going to drive, it definitely should not have been Fremantle Jack, a fine poet but the jitteriest Buddhist I ever met.

As for me, I could recognise only a handful of Japanese characters, and my sense of direction was terrible. I should never have been the navigator. But as we approached the city, I was the one who shouted the directions and Jack who jerked the wheel in response, and that was how—miraculously—we found ourselves on the road to Ginza. I was elated by this serendipity but Fremantle Jack was tugging at his earlobe, not a good sign if you knew him well.

The Ikebukurosen, or #5 expressway, was a
concrete ribbon winding—very beautifully I thought—above the flat roofs of Tokyo which was like nothing I had ever seen: low and chalky white and almost treeless, distinguished by water towers on every building. Even before I got down into the little lanes of Shinjuku, before I walked amongst the perfect Japanese Elvises in Harajuku, before I met Hisao-the-left-handed, who made the most extraordinary chisels on the planet, it was here, on the Ikebukurosen, that I decided to write a science-fiction screenplay, just so we could shoot it in Tokyo.