Read Year of the Chick Online

Year of the Chick 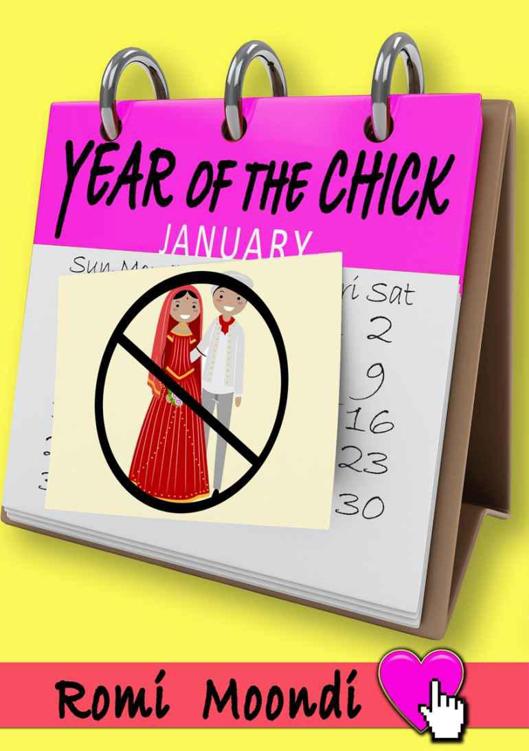 Year of the Chick

To Ms. Fioravanti:
as my eleventh grade English teacher, you threatened me with detention if I didn’t write articles for the high school newspaper. Thank you for setting off my favourite thing to do in life.

To Juveria Collins:
who sat me down in 2007 and told me I should write a blog, even though I was offended and disturbed by the suggestion. Given that this book was inspired by one of my blogs…you were obviously right. Thanks.

To Laura Guida:
thanks for being an amazingly encouraging friend, the best shoulder to lean on, and the best person to talk to about the craziness of everyday life. Everybody needs a Laura.

To Emily Robertson and Laura Tashjian:
for adventures, wins, disappointments, dance parties, liquid courage and moments of “random” over the years, thank goodness for you two!

To the great reviewers at “The Next Big Writer” workshop site:
if not for the peer-to-peer reviewing and constant feedback which helped me post a chapter a week, I never would have finished a full-length novel.
In particular, thanks to: Bisi Adjapon, Tirzah Goodwin, K. L. Brady, Rachel Hamm, David Hunter and Marc Kovacs.

To David Levine:
thanks for burning your eyes with the task of proofreading my book, and for being the best blog-dad ever!

To DC:
thanks for standing beside me as the boat rocked back and forth on the Hudson River, to tell me I should never give up on writing. You were more than right.

And last but not least, to Paul DH Baylay:
there’s a million reasons why this story would have never been written without you, and only you and I know them all. For the amazing help with the re-write, for the ideas, for the encouragement, for the “telling me what I didn’t want to hear when I needed to hear it,” I’ll never forget any of it. Thank you.

This book is dedicated to all the people who feel burdened by expectations, drowned by rules, and a little too crooked to fit into a pre-assigned role. Which at one time or another, could be anyone. For you, for me, for all.

When I handed the latte boy his money my hand grazed his palm. I cringed and quickly wiped the clammy residue on my pant leg.
Peter’s hands weren’t slimy. HIS hands didn’t need a dehumidifier.

My eyes bore deep into his.

His eyes stared blankly back. “Your latte’s waiting at the bar.”

Peter had left Canada two years ago, but here I was in the place where it all began. The place where you flirt with English baristas on temporary work visas, then whisk them away on ice skating dates to Nathan Phillips Square, then snuggly dates, then “leave the rest to your imagination dates,” then …then…

E-mails instead of phone calls.

I mean a nice respectable girlfriend.

With my latte in one hand and a sack full of snowman cookies in the other, I headed to the corner table for a seat. In seconds I was chomping on the cookies in a sucrose bliss, as the multi-coloured icing dirty-danced its way along my tongue.

Two women at a nearby table were deep in conversation, heads lowered and intense. I noticed them whenever my eyes unrolled from the back of my head, the pit-stops in-between my cookie-induced ecstasy. They suddenly burst into laughter, and buoyed by the “ha ha has” their strands of blond hair began to bounce.

Oh sure, it’s all fun and games when your world is one big hook-up.

Provided we were well-adjusted girls who’d been dating like the pros since age sixteen.

I shook the memories of dateless years and “dry spells so long I could practically be a monk” from my mind with a swig of latte, but arranged marriage thoughts took their place. No matter how many times I searched for the logic it escaped me, and why not? In what world was it normal to never look at guys before marriage, then have sex with an almost-stranger when arranged-marriage day arrived?

“Pfft.” The sound emanating from my mouth would’ve seemed a lot more normal if I wasn’t alone at this table. In reality the blondes seemed disturbed by the escaped mental patient to their left. I shrugged my shoulders and twirled a long strand of hair between my fingers. Thoughtfully. Worriedly.

I haven’t had a date in two whole years (phone-calls to English guys don’t exactly count).

On the other hand I’m not fat.

But on the OTHER-other hand I’m not exactly skinny.

Back to the other hand: being five-foot-seven means the weight gain tends to stretch.

My twirling hand relaxed at the endless dating options that Toronto would deliver. All I had to do was be a little patient. What choice did I have? Desperation was ugly. And smelly.

My thoughts must have carried away, as I found myself guzzling the last of a tepid latte. A glance at my watch confirmed the unscheduled daydream.

Four-fifteen p.m.
Time flies when it’s a party of one.

I squeezed through the revolving doors, and raced to catch the four-thirty train.

Four twenty-six p.m. and I was standing on the train station platform. A broad-shouldered woman hit me with her giant satchel, an “accident” that conveniently pushed me to the back. I’d never messed with a broad-shouldered woman before, and wasn’t about to start to today. Besides, my hair was silkier than hers, so karma had done its work.

The train bell clanged and for me it tolled a somber tune. My afternoon of pondering was about to be replaced with a nightly confrontation.

I took a deep breath and boarded the train.

If there’s one thing I learned from family sitcoms growing up, it’s that sisters, despite their superficial squabbles, have a superglue-level of a bond. I wondered though, about the margin of error for this bond. Like what about the sisterly bond which is only sealed together with Scotch Tape? Or worse, sealed with only the cheap and sticky edge of an envelope?

My older sister and I were the victims of the “envelope adhesive.”

I slammed the door shut against the howling wind, and that was just the trigger she needed.

“Hurry up and wash the containers, dumbass!

We have to bring them home!” Neema’s voice was filtered by her closed bedroom door, but it managed to pierce my ears like a smoke alarm with PMS.

“EXCUSE ME?” I yelled from the bottom of the stairs. “You’ve been home for an entire hour, bitch. Why the hell didn’t YOU wash them?” The fury within me was bubbling over, as I dusted off the snow from the shoulders of my big wool coat. It had started with the train delay right before my stop, continued with the slippery roads, and was now poised to end with a bitch-fest.
Typical.

“I always do the dishes!” she bellowed back. “You don’t do shit, you fat-ass loser. So wash them and hurry up, I told Mom and Dad we’d be home by seven!”

“What about last week, when I did all the laundry? YOU PIECE OF SHIT!”

I could never recall when the switch to general hatred had occurred, but somewhere along the way, my sister and I had gone from jumping on the bed singing “Like a Virgin”...to this.

It was a difficult grudge to live with, since we shared a house in Toronto from Sunday to Friday night. On the surface the arrangement put us closer to our places of work. Underneath it though, was a blissful escape from my parents’ harsh regime. Even though the pact to keep our crazy late nights from our parents held true, there was still the little problem of having her in my face.

At the moment I wanted to snap off her twiggy arms, but I’d save that for another time. So I went to the kitchen and washed the dishes in a rage, tossing the lids so they bounced off the rack, and splashing for the sake of splashing.

Afterwards I dried every one of the large glass bowls and their plastic lids, placing them in a milk crate lined with dishcloths. These dishes would travel back here once the Christmas break was over, only filled with all my mother’s Indian food.

I thumped up the stairs and now stood in front of my closet, where small T-shirts and tight blouses from thinner days self-righteously hung. I opened my dresser drawer instead, and in one swift motion crammed my duffle bag with sweatshirts and flannel.

I returned downstairs and waited.

I looked up the stairs and could still see the light bleeding out from underneath her door.

I figured she needed a prompt.

“HURRY THE FUCK UP!”

There was no response, but a minute later she finally opened the door. Down the steps she came, five-foot-nine and stick-thin with her Gucci bag in hand, and her shoulder-length hair sitting perfectly still and straightened. I wanted to explain how Gucci would pay her an enormous sum to never wear their brand again, but I was far too tired for another round of insults.

By the time we loaded up the car I was ready for a drool-filled nap. Partly because I was tired, but mostly to avoid the mere thought of a Narindra family Christmas; the judging, the dinner-table inquisitions, and the fake transformation into the girl I was supposed to be…

Ninety minutes of driving and thirty of my dad’s “please don’t be dead” emergency calls later, we finally made it home to suburban paradise. This sleepy town in Southwestern Ontario was brimming with nostalgia. The shopping mall where I was chaperoned by my parents (forcing me to hide from my friends in the men’s underwear section), the one movie theater I never got to make out at, and the one video store where I’d bump into my dentist, only to discover his love for Alyssa Milano’s straight-to-video collection.

Our childhood home was filled with nostalgia too, most of it involving scolding and the smell of spices. I opened the door with my sister right behind me, and we yelled to whomever that we’d arrived. My gaze fell upon the empty living room, complete with mustard-coloured, floral-printed couches. Not to mention the matching tasseled cushions.

This room seems uglier every time.

Of course the real “living” happened in the family room further ahead. That’s where the big screen television was, and it was also conveniently next to the kitchen. It was from there, in the back of the house, that the smell of chicken curry wafted over.

As I pulled off my boots and took in the aroma, I felt the slightest brush across my calf. It was my black and white cat named Tommy. My sister scooped him up for a shower of her sloppy kisses.

Feline molestation at its worst.

I grabbed him away from her venomous lips and she bounded up the stairs. I quickly planted some more appropriate pecks of my own, but as I set him down I realized I’d been kissing the exact same spots that had been covered with my sister’s lips.

Is that the same as kissing her?