Read You Against Me Online

BOOK: You Against Me
>>DOWNLOAD HERE >>READ ONLINE NOW
ads 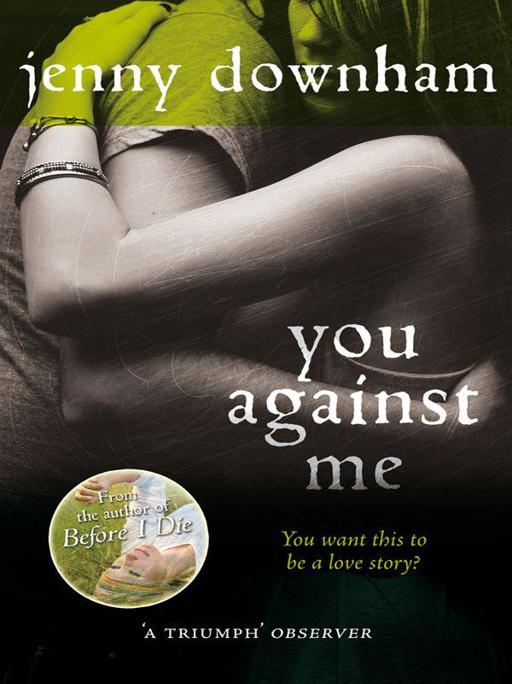 You want this to be a love story?
If someone hurts your sister and you’re any kind of man, you seek revenge, right?

If your brother’s accused of a terrible crime but says he didn’t do it, you defend him, don’t you?

When Mikey’s sister claims a boy assaulted her, his world begins to fall apart.

When Ellie’s brother is charged with the offence, her world begins to unravel.

you
against
me
jenny downham
For HJD and AKD
One

Here was the milk on the counter in front of him. Here was Ajay, hand out expectantly. And here was Mikey, scrabbling for coins among the old receipts and bits of tissue in his jacket pocket. A woman in the queue behind him shuffled her feet. Behind her, a bloke coughed impatiently.

Anger stirred Mikey’s gut. ‘Sorry,’ he mumbled. ‘I’ll have to leave it.’

Ajay shook his head. ‘Take the milk and pay me tomorrow, it’s all right. And here, take some chocolate for your sisters.’

‘Don’t be daft, take it.’ Ajay put a couple of Kit Kats in the carrier bag with the milk. ‘And have a good day, yeah?’

Mikey doubted it. He hadn’t had one of those for weeks. Still, he managed a quick nod of thanks, grabbed the bag and legged it.

Outside, the rain was still going, a fine mist falling into light from the fluorescent strip above the door. He breathed in deep, trying to smell the sea, but the air smelled of fridges – something to do with the fans blowing warm from the shop behind him. He yanked up his hood and crossed the road back to the estate.

When he got back to the flat, Holly was sitting on the carpet in front of the TV, eating Cookie Crisps from the packet. Karyn had stopped crying and was kneeling behind her, quietly brushing her sister’s hair.

Mikey looked her up and down. ‘You feeling better?’

‘So, you want to tell me what happened?’

Karyn shrugged. ‘I tried to go out. I got as far as the front door.’

She rolled her eyes. ‘Crack open the champagne.’

‘No, Mikey, it’s the end. Holly needed milk for cereal and I couldn’t even manage that.’

He went to the kitchen and filled the kettle. He opened the curtains, then the window. The rain was slowing down and it smelled fresh out there now. He could hear a child crying. A woman shouting. A door slammed three times.
Bang
.
Bang
.
Bang
.

Holly came in and dumped the cereal box on the counter. Mikey waggled the collar of her pyjama top. ‘Why aren’t you dressed for school?’

‘Because I’m not going.’

She collapsed backwards against the fridge, her head flung up towards the ceiling. ‘I can’t go to school, it’s the bail hearing!’

He frowned at her. How the hell did she know about that? ‘Listen, Holly, if you promise to go and get dressed, I’ll give you a Kit Kat.’

‘Is it two or four sticks?’

He rummaged in the carrier bag, pulled out one of the bars and dangled it at her. ‘And can you wake Mum up?’

‘Yeah.’ If this wasn’t an emergency, he didn’t know what was.

Holly shook her head as if the idea was crazy, grabbed the Kit Kat and ran away up the stairs.

Mum thought the police would help Karyn, that was the trouble. After taking Karyn to the station and reporting what had happened, Mum had stepped back, probably telling herself she’d done her bit. But the police were crap. They’d asked Karyn loads of personal questions, even though she was upset. Then the cop who brought her home frowned at the mess, like she was judging the whole family. Mum thought that was normal, but Mikey had bitten his tongue in frustration, tasted blood in his mouth, the rust and the thickness of it.

Later, when the cop went, Mikey got the address out of Karyn and told Jacko to bring the car. Jacko brought the lads with him too, but when they got to the bastard’s house they were too late – Tom Parker had been arrested hours ago and forensics were already scouring the place.

For nearly two weeks Mikey had tried to swallow the anger. But how did he stop his stomach tilting every time Karyn cried? How did he watch Holly stroking Karyn’s arm, squeezing her shoulder, giving little wet taps to her face, like she was a radio that needed tuning or a TV that had gone wrong?

Mum’s solution was to hide herself away. But an eight-year-old comforting a fifteen-year-old meant the world was upside down. And something had to be done about it.

He made the tea and took it through, put it on the table in front of Karyn. She’d made a nest for herself on the sofa. She kept doing that – covering herself with cushions, blankets, jumpers.

Mikey went over and sat on the edge. ‘How you feeling now?’

With the light behind her she looked so sad.

‘He’s probably out already,’ she said. ‘Just walking about having a nice time.’

She nodded, but she didn’t look sure. ‘There’s this girl at school,’ she said. ‘Last term she had seven boyfriends and everyone said she was a slag.’

‘And there’s a boy in my tutor group and he had ten girlfriends. You know what they call him?’

She sighed, lay back on the sofa and stared at the ceiling. ‘I watched this programme on TV,’ she said. ‘What happened to me happens to loads of girls. Loads and loads.’

Mikey looked at his nails. They were all ragged. Did he bite them? When did he start doing that?

‘Most girls don’t report it, because hardly any boys get done for it. Something like six in a hundred. That’s not very many, is it?’

‘When I opened the door just now, there were some kids down in the courtyard and they all looked at me. If I go back to school, everyone will stare at me too.’ She lowered her eyes and he felt the shame wash off her in waves. ‘They’ll look at me as if I deserved it. Tom Parker invited me to his house and I went, so how can anything be his fault?’ She pushed a handful of hair from her face. ‘That doesn’t even make any sense.’

He wanted her to stop talking. He felt a rising panic that if she didn’t stop right now, she was going to go on and on for ever. Maybe she’d even talk about the night it happened. He couldn’t bear to listen to that again.

‘I’m going to get him for you,’ he said. It came out loud and sounded very certain.

It was strange how words meant something when they came out of your mouth. Inside your head they were safe and silent, but once they were outside, people grabbed hold of them.

‘I’m going to go to his house and smash his head in.’

Karyn pressed the flat of her hand against her forehead as if the thought of it gave her a headache. ‘You’ll never get away with it.’

But Mikey could tell by the sudden glow in her eyes that she wanted him to do this for her. He hadn’t done it and he should have done it. And if he did it, then she could stop hurting.

There was a bloke on the estate no one messed with. He’d got his son’s moped back when some kids nicked it. He knew people who knew people. That was the kind of man everyone admired. If you tried to hurt him, you’d bounce off. Mikey had never battered anyone before, but the thought of that bloke made him feel stronger. He stood up, certain of his plan. He’d go alone this time, take gloves and wear a hoodie. If he didn’t leave fingerprints, he’d get away with it.

He went to the kitchen and dragged the tool box out from under the sink. Just holding the spanner made him feel better – there was something about how heavy it was, how definite it felt to hold it in his hand. The feelings went into the object. He felt positively cheerful as he put on his jacket, rammed the spanner into his pocket and did up his zip.

Karyn looked at him, her eyes shining. ‘You’re seriously going to get him?’

‘And you’re seriously going to hurt him?’

And that’s when Mum staggered in, fag in hand, shielding her eyes like everything was too bright.

Holly was jumping up and down behind her. ‘Look!’ she cried. ‘Mum’s awake. She’s actually downstairs.’

It was like watching someone come up from a dive. She had to remember who she was, that she really did live here, that today was the bail hearing and this family really did need to get their act together.

Holly cleared a place for her on the sofa, then sat on her lap and rubbed noses with her. ‘Do I have to go to school? Can I spend the day with you instead?’

‘Because that’s what she does.’

‘I don’t want her to come any more,’ Karyn said. ‘She asks stupid questions.’

‘Well, she’s coming anyway,’ Mikey snapped, ‘so Holly can’t be here, can she? You want a cop to notice she’s not in school?’

Light dawned on his mother’s face. She looked around the lounge and over to the kitchen. Both rooms were a mess – the table covered in junk, unwashed plates and saucepans in the sink.

‘You’ve got about an hour,’ Mikey told her.

She glared at him. ‘You think I don’t know that?’

Holly put the TV back on at top volume and music crashed around them.

‘Turn it off,’ Mikey yelled. It would send their mum back to bed. But Holly ignored him so he unplugged it.

Mum rubbed her face over and over. ‘Make me a coffee, Mikey.’

Make it yourself
, he thought. But still, he switched the kettle back on and rinsed out a mug.

‘After this smoke I’ll wash up,’ Mum said. She took another puff on her cigarette, then looked right at him in that way she sometimes did, as if she could see right inside him. ‘You look tired.’

‘Looking after you lot, that’s why.’

‘Where were you last night?’

‘Were you with that new girlfriend? Sarah, is it?’

‘That was the last one.’

In his pocket the spanner hummed. He handed Mum her coffee. ‘I have to go now.’

She scowled at him. ‘I don’t want you looking for trouble.’

She was a bit clever like that. You thought she was hung-over and wouldn’t notice stuff, but she often did.

The Skirt by Gary Soto
Steel Beneath the Skin by Niall Teasdale
The Scarlet Thief by Paul Fraser Collard
Metal Gear Solid: Guns of the Patriot by Itoh, Project
Lost Girls by Graham Wilson
Hope Is a Ferris Wheel by Robin Herrera
A Fool for a Client by David Kessler
Revelation (Seeds of Humanity: The Cobalt Heresy) by Caleb Wachter
Agatha Raisin: Hell's Bells by M. C. Beaton
The Dark Lord's Handbook by Paul Dale