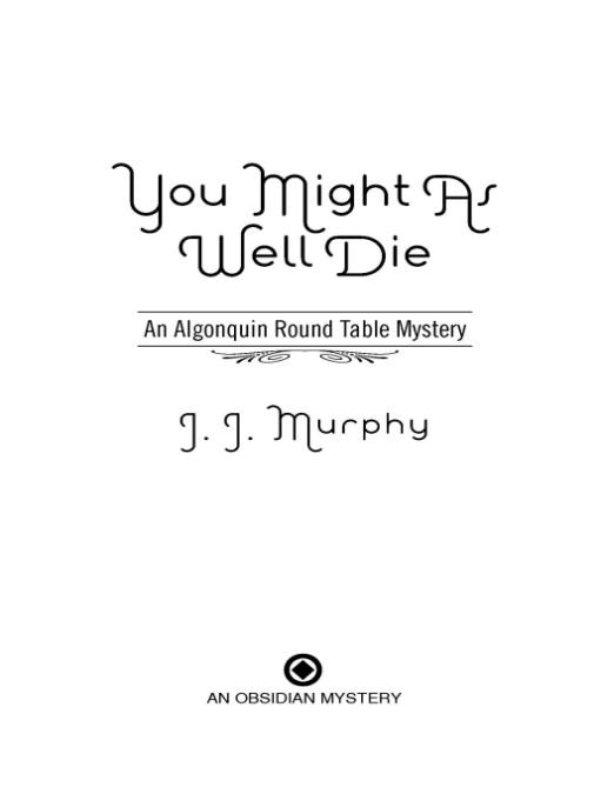 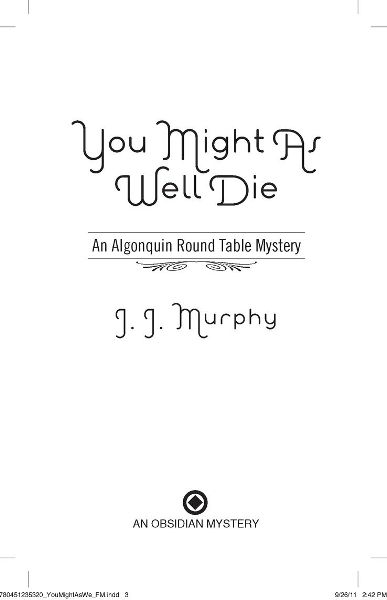 Table of Contents
Title Page
Copyright Page
Dedication
Preface
Chapter 1
Chapter 2
Chapter 3
Chapter 4
Chapter 5
Chapter 6
Chapter 7
Chapter 8
Chapter 9
Chapter 10
Chapter 11
Chapter 12
Chapter 13
Chapter 14
Chapter 15
Chapter 16
Chapter 17
Chapter 18
Chapter 19
Chapter 20
Chapter 21
Chapter 22
Chapter 23
Chapter 24
Chapter 25
Chapter 26
Chapter 27
Chapter 28
Chapter 29
Chapter 30
Chapter 31
Chapter 32
Chapter 33
Chapter 34
Chapter 35
Chapter 36
Chapter 37
Chapter 38
Chapter 39
Chapter 40
Chapter 41
Chapter 42
Chapter 43
Chapter 44
Chapter 45
Chapter 46
Chapter 47
Chapter 48
Historical Note
Acknowledgements
About the Author
Teaser chapter
Praise for
Murder Your Darlings
“Dorothy Parker—satirist, poet, and one of the great wits of the twentieth century—is the feisty heroine of this delightful mystery.... I loved it!”
—
Suspense Magazine
“[A] brilliant first novel. . . . Murphy has courageously ventured into Parker’s world and does a creditable job. . . . [The] invented witticisms are plausible as well as entertaining. And the mystery ain’t bad either.”
—
Mystery Scene
“Capturing the wild and crazy times of 1920s New York, author J. J. Murphy brings a charming sense of history to [the] mystery in this delightful debut story. With such a lively cast of characters to choose from, I predict that the Algonquin Round Table Mystery series will be one that fans of cozy mysteries will look forward to for a long time.”
—Fresh Fiction
“Murphy’s debut, the first in a new series set in the 1920s, will intrigue Dorothy Parker fans.”
—
Publishers Weekly
“This historical mystery is very atmospheric, giving armchair time-traveling readers a vivid taste of the Roaring Twenties in New York City.”
—Genre Go Round Reviews
“Some would pay a fortune for the chance to spend a few hours in the company of Dorothy Parker and the Vicious Circle; thanks to J. J. Murphy, however, you can now do so for less than the price of a drink at the Algonquin.”
—The Season for Romance
“This new series shows comical and intelligent promise. Each character stays true to the original in comment and personality . . . marvelous.”
—
The Historical Novels Review
“A fun read for those enamored of Dorothy Parker and her age.”
—The Mystery Reader
Other Books in the
Algonquin Round Table Mystery Series
by J. J. Murphy
Murder Your Darlings
OBSIDIAN
Published by New American Library, a division of
Penguin Group (USA) Inc., 375 Hudson Street,
New York, New York 10014, USA
Penguin Group (Canada), 90 Eglinton Avenue East, Suite 700, Toronto,
Ontario M4P 2Y3, Canada (a division of Pearson Penguin Canada Inc.)
Penguin Books Ltd., 80 Strand, London WC2R 0RL, England
Penguin Ireland, 25 St. Stephen’s Green, Dublin 2,
Ireland (a division of Penguin Books Ltd.)
Penguin Group (Australia), 250 Camberwell Road, Camberwell, Victoria 3124,
Australia (a division of Pearson Australia Group Pty. Ltd.)
Penguin Books India Pvt. Ltd., 11 Community Centre, Panchsheel Park,
New Delhi - 110 017, India
Penguin Group (NZ), 67 Apollo Drive, Rosedale, Auckland 0632,
New Zealand (a division of Pearson New Zealand Ltd.)
Penguin Books (South Africa) (Pty.) Ltd., 24 Sturdee Avenue,
Rosebank, Johannesburg 2196, South Africa
Penguin Books Ltd., Registered Offices: 80 Strand, London WC2R 0RL, England
First published by Obsidian, an imprint of New American Library, a division of Penguin Group (USA) Inc.
First Printing, December 2011
ISBN : 978-1-101-55924-6
Copyright © John Murphy, 2011
OBSIDIAN and logo are trademarks of Penguin Group (USA) Inc.
Without limiting the rights under copyright reserved above, no part of this publication may be reproduced, stored in or introduced into a retrieval system, or transmitted, in any form, or by any means (electronic, mechanical, photocopying, recording, or otherwise), without the prior written permission of both the copyright owner and the above publisher of this book.
PUBLISHER’S NOTE
This is a work of fiction. Names, characters, places, and incidents either are the product of the author’s imagination or are used fictitiously, and any resemblance to actual persons, living or dead, business establishments, events, or locales is entirely coincidental.
The publisher does not have any control over and does not assume any responsibility for author or third-party Web sites or their content.
The scanning, uploading, and distribution of this book via the Internet or via any other means without the permission of the publisher is illegal and punishable by law. Please purchase only authorized electronic editions, and do not participate in or encourage electronic piracy of copyrighted materials. Your support of the author’s rights is appreciated.

To Bill Murphy and Stephen Murphy
RÉSUMÉ
Razors pain you;
Rivers are damp;
Acids stain you;
And drugs cause cramp.
Guns aren’t lawful;
Nooses give;
Gas smells awful;
You might as well live.
—Dorothy Parker
AUTHOR’S NOTE
Dorothy Parker reportedly said, “I don’t care what is writ-Dorothy Parker reportedly said, “I don’t care what is written about me so long as it isn’t true.” Following her advice, this book is almost entirely a work of fiction, even though it is populated with many real people. The members of the Algonquin Round Table never seemed to let the truth get in the way of telling a good story—and I hope you won’t let it get in the way of enjoying this one.
PREFACE
In the 1920s, there was no Internet, no wireless phones, no satellite TV—no TV at all. Even radio wasn’t commonplace until the later twenties. Instead of text messages and e-mail, people sent telegrams or employed messenger boys. For music at home, they listened to a Victrola or sang around a piano.
For entertainment, New Yorkers had dozens of theaters in which to see plays and a number of movie palaces where they could see silent films. (“Talkies” didn’t arrive until the later twenties, too.)
For information, New Yorkers lacked twenty-four-hour cable news networks. But they did have a dozen daily newspapers to choose from. Presses ran day and night, printing morning editions, afternoon editions and special editions
(“Extra! Extra! Read all about it!”)
.
At this time, the people who wrote the news also became the news. A new class of writers, editors and critics emerged. A loose-knit group of ten—and their assorted friends—gathered around a large table for lunch at the Algonquin Hotel. They went to the Algonquin because it welcomed artists and writers—and because it was convenient and inexpensive. Their daily lunch gatherings were known more for wisecracks and witticisms than for the food they ate. But they buoyed one another with merriment and camaraderie. They thought the fun would never end.
Chapter 1
“
H
ave you ever wanted to kill yourself?”
Dorothy Parker looked up to see the eager face of Ernie MacGuffin hovering just inches away. MacGuffin was a third-rate illustrator and a first-rate nuisance.
“Mrs. Parker,” he whispered again, only more urgently. “Have you ever wanted to kill yourself?”
“Matter of fact,” she sighed, “I’m thinking about it right now.”
It was just after lunchtime at the Algonquin Hotel. Dorothy sat at the Round Table in the hotel’s dining room. She had been searching in her purse for a cigarette when MacGuffin suddenly appeared. Her usual lunch companions, sometimes called the Vicious Circle, had gotten up from the table. They were saying their see-you-laters and heading back to work for the afternoon. Helplessly, she watched them go.
“Seriously,” MacGuffin said, hurriedly taking the seat next to hers. “I want to know.”
She looked at him. He was a skinny scarecrow. Messy, nut-brown hair. Cheap necktie. Paint-stained fingers. Dirty fingernails. A small smear of egg salad at the corner of his mouth. She felt both pity and disgust for him.
“Suicide?” She lit her cigarette. “Sure, I’ve tried it. Who hasn’t these days? It’s like the Charleston—everyone’s doing it.”
“I knew it!” He leaned closer. “What happened?”
“What happened?”
Her cigarette almost fell from her mouth. “Can’t you guess? It didn’t stick.”
He nodded as if he was about to suggest how she could get it right next time.
“What’s this all about?” she asked.
MacGuffin inhaled deeply. He was clearly debating whether he could trust her with something.
MacGuffin was a poor man’s Norman Rockwell. He aspired to paint covers for
Collier’s
,
Vanity Fair
and
The Saturday Evening Post
, but most of his works were for pulp magazines like
True Crime
or
Old West
. He was not an invited member of the Round Table. Instead, he rode on the coattails of Neysa McMein, a first-rate illustrator and one of the few women besides Dorothy who were welcome at the Round Table.
Unlike Dorothy, Ernie MacGuffin took this conversation very seriously. “Your suicide—were you afraid?”
“I was afraid I would wake up.” She brushed aside the brunette bangs that shadowed her pretty face. “Again, what’s this all about?”
He seemed to come to a decision. “I knew you knew all about it. Now I know I can trust you. Here.” He handed her an envelope. “Don’t open it until midnight. Promise me.”
No one took Ernie seriously. Not his friends, not the art world, not the public. She looked at the plain white envelope and handed it back.
“Nothing doing,” she said. “If you mean to commit suicide, don’t get me involved. If you go toes up, I don’t want that on my head.”
He looked disappointed and confused.
She softened. “Don’t kill yourself, Ernie. Take it from me. Attempting suicide after lunchtime will simply ruin your whole day.”

Faraway Horses by Buck Brannaman, William Reynolds
Luc: A Spy Thriller by Greg Coppin
Behind the Pines (The Gass County Series Book 3) by Unknown
Mad River by John Sandford
Misfit by Adam Braver
A Love Soul Deep by Scott, Amber
Herb Magic for Beginners by Ellen Dugan
When Darkness Ends by Alexandra Ivy
KC Frantzen - May the K9 Spy 02 - May Finds a Way: Peril in Paris by KC Frantzen
Prince of Wrath by Tony Roberts