Read You'll Think of Me Online

You'll Think of Me 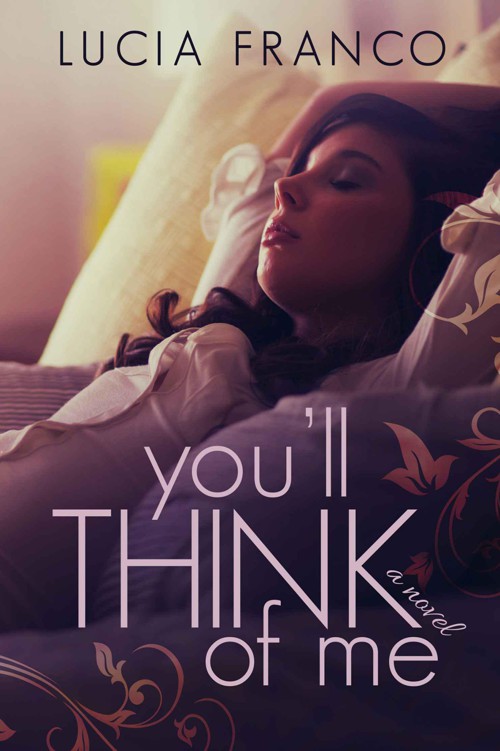 You’ll Think of Me

Cover Design by Regina Wamba of Mae I Design

About the Book Designer

To my husband, for constantly begging to read my writing even though I wouldn’t allow you to.

Nadine Winningham, your support gave me the strength to keep going. You were the fire behind me. Luke is your man. Well, partially your man.

We’re living in a generation where lying is the new truth, loyalty is a tattoo and love is just a quote.

“Y
ou know exactly what I’m saying. Read between the lines, baby. The fact that you knew this weeks ago and never told me has my blood boilin’. Fuckin’ boilin’. You led me to think it was settled and we were okay. You lied to my face!” he roared, his green eyes lit with fury. “Excuse me, withheld some major details,” he said sarcastically.

Flustered to the core, Livy shook on the inside. This wasn’t what she wanted, but she was so upset and hurt that she couldn’t help what flew from her mouth.

“Who are you to tell me I can't leave? That I’m stuck here forever? What’s holding me back? Nothing!”

“The one who loves you, that's who! The one who wants to make you his wife one day! Me, that's who! Damn woman, you know how to get under a man’s skin like no other. Fuck!”

Olivia cringed. “I never lied to you. So stop insinuating I did.”

“But you held back though, didn't you? You left out a few things for the sake of stringin’ me along. It’s the same damn thing, baby.”

“I never
strung
you along. It’s not the same thing at all. Not even close.”

“If I remember correctly, you said something like, ‘It was merely a thought…honestly…nothing more.’ Nothing more. Nothing more, Livy? Obviously it was.”

“Luke, it’s done. I’m sorry, but it’s done. Can we stop arguing? I want to spend the little bit of time I have left with you before I have to leave for New York.”

Standing from the bed, Olivia wrapped the white sheet around her body and walked over to where Luke was standing.

“Fine. How about we just break it off now? Let’s end this—us—right here and save us from the heartache. You go your way, I'll go mine.”

Luke saw no reason to keep on going. If she wanted to go to New York, then he would get out of her life now.

Her eyes prickled as tears threatened to fall. Blinking rapidly, she whispered, “No,” under her breath. “You can't possibly be serious.”

“Luke, there has to be a way we can work through this. Can’t we try a long distance relationship?”

“Why not? Why are you being so irrational?”

“Irr—Too bad, Livy. We're…through.” He was fired up, pissed off and needed to stop before he said something he would regret.

“
Please, don't end this. Please...” her voice cracked with despair.

Luke bent his head down as she craned her neck to look up at him. A lone tear trickled slowly down her cheek and he wiped it with his thumb, hating to see her cry. Trying to calm his temper, he took a deep breath.

D
elicate little flurries of snow descended on Olivia in the late night hour while she stood on her small balcony overlooking the city. One by one, the tiny ice crystals landed on her shoulders and hair, around her feet and on her patio furniture. As she drew in a crisp breath of wintery New York air, her lungs tightened and burned. She held it for a moment then exhaled, watching the gray cloud of air flow from her mouth. The low temperatures had her shivering, but she wasn’t ready to go inside just yet.

An icy blast of air blew through, causing Olivia’s hair to whip across her face. She bit the corner of her chapped lip and winced. After packing for the last few hours, Olivia wanted to take in the tranquility of the night, though it was anything but quiet and calm down below. There was always someone bustling down the streets, racing against time to find the nearest subway station, or hailing a taxi. Manhattan was known as the city that never sleeps, and it held true to its name. Being fortunate enough to live in the city that spanned only three miles wide, Olivia couldn’t help but feel as gloomy as the sky looked tonight. It was a bittersweet feeling. Living in New York was some of the most amazing—and difficult—times of her life, but she wouldn’t change one day that had passed by. Not one.

The next few months were going to be rough on her once again, but that would be nothing new. If she could live in New York and handle it as long as she had, then she could handle anything.

Olivia was set to relocate in just two weeks, though she wasn’t heading back to South Fork, she was moving to Savannah. It had been nine long years—a couple of years more than she had planned to stay—but the time had come. Her heart had been luring her back to the South for quite some time now, and a pull so strong could not be ignored. Savannah was approximately an hour north of South Fork—and the location of her new job. It was a much bigger city than South Fork, which was fine; she’d still be back in Georgia and that’s what mattered most to her. Olivia missed home. She missed the comfort of the small town, the easy laid-back lifestyle and surprisingly, the people.