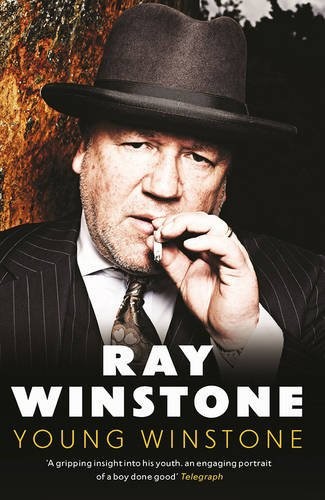 This digital edition first published in 2014 by Canongate Books

15.
The Prospect of Whitby, Wapping

23.
The Corner of Well Street and Mare Street

My mum with Nanny Rich and the first of her three husbands.

My mum and dad together before Laura and I came along.

Me posing on a blanket like a dog at Crufts.

At another wedding with my cousin Charlie-boy (I’m in the middle, he’s on my right). Not sure who the hatless kid was . . .

Cowboy-style this time in hat terms – with Laura in Nanny Rich’s garden.

Early morning – the Cage with the sun rising in the east behind Christ Church, Spitalfields.

Old Spitalfields Market as it was – good luck finding a sack of King Edwards in there these days.

My dad looking suave on the market.

Spitalfields life before the clean-up, with The Cage, A. Mays and Christ Church in the background.

West Ham bringing home the 1964 FA Cup on their luxury single-decker. All four of the Winstones are in that crowd somewhere.

With my dad after beating David Heyland (the tall one on the left) who was Essex champ. Although I won, I gave David the bigger trophy – winning was enough for me, and he was a nice kid.

In
The Sweeney
in 1975, shortly before making my unauthorised escape.

Me in
Minder
– with George Cole on the right and my fellow Corona old-boy Dennis Waterman between us.

Shadow-boxing with my mate Tony London on the beach at Torquay – Elaine made the right choice.

They called Esther Williams ‘A Goddess when wet’. . .

In
Quadrophenia
with my leathers and my Liberace haircut.

On honeymoon in the Canary Islands with Elaine and a camel.

We got straight off the plane home and went to the premiere of
Scum
– note the suitcases and my
Quadrophenia
badge.

The concluding riot in
Scum –
no need for Phil Daniels to help me out here. I was the Daddy by this time . . .

My dad at the bar in Church Street, Enfield – no sign of the Bobby Moore World Cup ice bucket for some reason.

This is the outfit I wore on that plane trip to Cannes with Alan Clarke – not sure if the ‘foot up’ thing is quite working for me, though.

At the Edinburgh Film Festival with
Scum
in 1979.

In Canada in 1980 filming
Ladies And Gentlemen, the Fabulous Stains.

a) With Paul Simonon

b) A beery leer

d) Elaine offers me a lesson in microphone technique

e) Onstage as lead singer of ‘The Looters’

Me with Alex Steene, John Conteh and Perry Fenwick, who plays Billy Mitchell in
EastEnders.
He’s a great mate of mine who comes from my manor. Well, close enough . . . Canning Town/Custom House.

Even Will Scarlet needs a fag break.

The face that launched a thousand arrows . . .

Lois with me, mum and Toffy, and then getting christened with me and Elaine.

Matthew McConaughey struggles not to look intimidated by my manly physique.

It’s early 2007 and I’m standing on a ship off the coast of northeastern Australia. We’re moored right by Lizard Island, named by my fellow Londoner and Great Briton Captain Cook, and I’m making this film called
Fool’s Gold
starring Matthew McConaughey, Kate Hudson and my old mate Donald Sutherland, who is a blinding geezer.

Donald is playing an Englishman and I’m playing a Yank, but in hindsight we should’ve swapped roles because I was fucking diabolical in that film – I should’ve got nicked for impersonating an actor. Anyway, I digress . . . a big word for me – seven letters.

So there’s a bit of a buzz going on with a few people running about on deck, and all of a sudden we’re summoned downstairs to this big room with a telly in it. This is the whole fucking crew by the way, with me and Donald hiding at the back like two naughty schoolboys. Then somebody announces it’s the ‘Most Beautiful Man in the World’ Awards.

Well, obviously me and the Don think we might be in the running here, but hold up, the next announcement tells us that our very own Matthew McConaughey is one of the nominees and he’s up against
that other alright-looking geezer, George Clooney. Anyway, the show begins and Matthew is giving it the old ‘Woo! Woo!’ like the Yanks do when they get excited. After about five minutes of this bollocks I wanna be somewhere else – anywhere else. Yeah, I suppose I might be a little bit jealous. I mean, he ain’t a bad-looking fella . . .

As they’re building up to the big moment the television shows this satellite going across the world from east to west. Funny how everything and everyone seems to travel from east to west. Maybe they’re following the sun – wanting to find out where it goes before it comes up the other side again – or maybe they thought it went down a hole. Anyway, this satellite is travelling across Europe and as it’s getting closer to London, I’m thinking, ‘You never know . . .’

Bang! It hits London and with all the lapping up that’s going on I can’t contain myself any more. I shout out, ‘Stop right there, my son! That’s me!’ The Aussies, who have a great sense of humour – well, they’re cockney Irish, ain’t they? Or at least the majority are – are all giggling. But as far as the others are concerned, it goes straight over their heads.

Eventually the satellite gets to America and we’re into Clooney and McConaughey territory. We creep quietly past George and slip loudly into Texas, and at this point it’s announced that Matthew is the winner. He goes absolutely potty – like he’s scored the winning goal in the World Cup final and won the Heavyweight Championship of the World in one go.

The whole thing just seems a bit embarrassing, but then on reflection I start to think maybe this is the big difference between us – apart from my good looks, of course. Maybe this is what makes Matthew a film star, which he is – at the time of writing he’s just won an Oscar, and deservedly so.

Anyway, once I finally get back up on deck, the whole thing kinda makes me think about where I’ve come from. Looking at Australia, 14,000 miles away from home – literally on the other side of the world – I start thinking about me and my mate Tony Yeates as kids in the East End, and I start thinking about Captain Cook. There’s a plaque on the Mile End Road which marks the start of his journey to Oz. It’s just opposite the place a club called Nashville’s used to be, where me and Tony had a few adventures of our own in the late seventies. We’d often find ourselves gazing unsteadily up at that plaque after we’d had a few on a Friday night – dreaming of travelling the world, the places we might see and the people we might meet. And suddenly standing on that ship in the southern hemisphere, it comes to me: ‘I’ve made that journey. I’ve done what Cook did!’

Alright, he did it on a sailing ship and I did it First Class British Airways, but I’ve done it just the same. I’m not trying to book myself as being on Cook’s level as an explorer, but for someone who comes from where I do, getting to the Great Barrier Reef was still some kind of achievement. That was when the idea of paying my own tribute to the places and the people that made me what I am (I won’t be demanding actual blue plaques: ‘Ray Winstone narrowly escaped a good kicking here’ etc.) started to make me smile. I hope it will do the same for you.

When I look back through the history of my family, we’ve done fuck all for this country. I don’t mean that in a bad way. The Winstones weren’t villains. We’ve always been grafters, back and forthing between the workhouse and the public house. But at the time I was born – in Hackney Hospital on 19 February 1957 – the Second World War was still very much on people’s minds. It’s probably a bit of a cliché to say ‘everyone had lost somebody’, but in our family, it wasn’t even true. Maybe it was more the luck of the draw in terms of their ages than anything else, but there was no one you could put your finger on and say they had sacrificed themselves in any way.

Doodlebugs rained down on Hackney – I remember being told about one going straight up Well Street – but none of them hit my nan and granddad’s flat in Shore Place. They had to go in the air-raid shelter round the front a few times, but their three young sons – my dad Ray and his two brothers, Charlie and Kenny – were safely evacuated out towards High Wycombe. The village they were lodged in lost three men on
HMS
Hood,
so that was about as close as the war got to them.

Uncle Kenny, my dad’s younger brother, got a start as a jockey and rode a few winners for Sir Gordon Richards’ stable. I’ve always surmised that he must’ve picked up his way with horses when he was evacuated to the countryside, because there weren’t too many racecourse gallops in the East End. That said, his dad, my granddad, Charles Thomas Winstone, did work as a tic-tac man, passing on the odds for bookmakers at tracks all around Britain, so horse-racing was kind of in Kenny’s blood.

When he got too tall to be a jockey on the flat any more, Kenny became a butcher. I guess that was one way he could carry on working with animals. He ended up with a couple of shops – one in Well Street, and one just round the back of Victoria Park – so he did alright. But before that he’d been a pretty good boxer as well. He boxed for the stable boys, and once fought at the Amateur Boxing Association (ABA) finals against a mate of my dad’s called Terry Spinks, who went on to win a gold medal at the Melbourne Olympics aged only eighteen, and would later be known for raising the alarm as the Black September terrorists approached the Israeli athletes’ quarters when he was coaching the South Korean team at the Munich Olympics in 1972. Apparently he gave old Spinksy a bit of a fright.

The Grace of a Duke by Linda Rae Sande
Who Loves You Best by Tess Stimson
A Regency Invitation to the House Party of the Season by Nicola Cornick, Joanna Maitland, Elizabeth Rolls
Force Me - Death By Sex by Karland, Marteeka, Azod, Shara
Altered States by Paul J. Newell
Strange Fates (Nyx Fortuna) by Marlene Perez
The Autumn Palace by Ebony McKenna
The Torrent (The New Agenda Series Book 4) by Pond, Simone
Blue Light by Walter Mosley
Natalie's Revenge by Susan Fleet