Read Your Backyard Is Wild Online

Your Backyard Is Wild 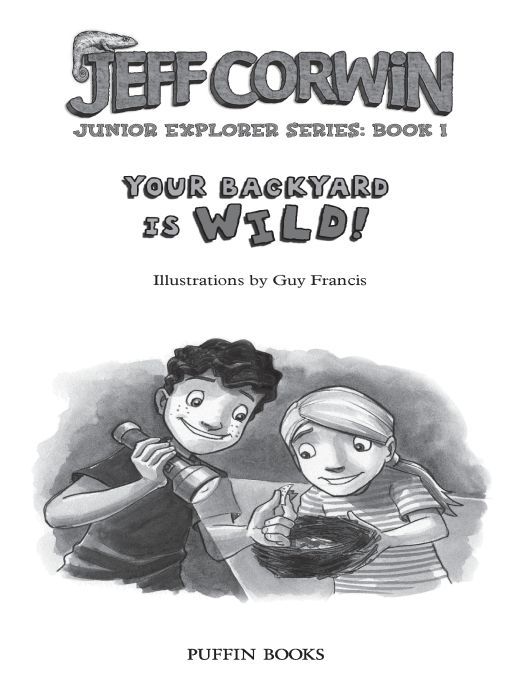 Table of Contents
Backyard Discovery
Title Page
Copyright Page
Chapter one
Chapter Two
Chapter Three
Chapter Four
Chapter Five
Chapter Six
Backyard Discovery
B
enjamin sat quietly for a few moments. He looked up at the sky, but he could see only a handful of stars—even on a clear night, the bright lights of the city blocked them out. Then he heard some rustling and saw a couple of bushy tails. More squirrels, he thought. Or skunks.
But as he kept watching, he realized it was a pair of raccoons! 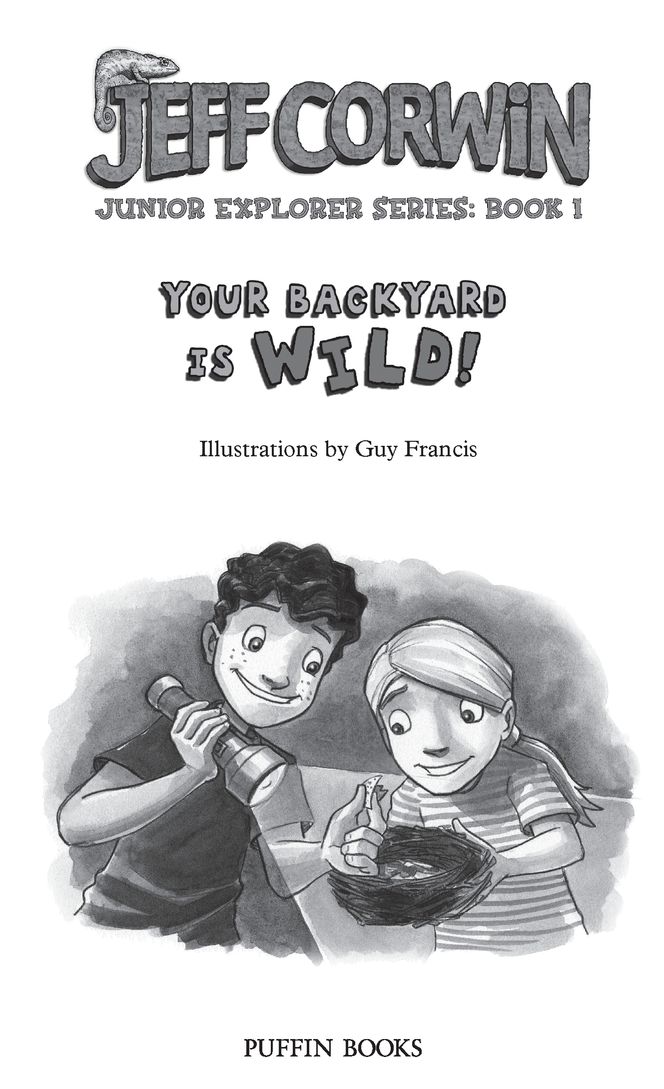 Dear Reader,
Growing up outside of Boston, I wasn’t really able to explore the natural world unless I went out into the countryside. So I had to find unique ways to discover the animals and plants around me—which led me right into my backyard! Even though I was living in a city, I found lots of amazing wildlife right outside my door. I just had to take a closer look!
And that’s what the Baxter kids like to do in my Junior Explorer series—explore their immediate surroundings. Whether in a city backyard or in their hometown near the Florida Everglades, Lucy and Benjamin Baxter always find ways to discover fascinating animals and plants. And so can you! It doesn’t matter where you live—all you have to do is look outside, engage your curiosity about the natural world, and have fun discovering the plants, animals, and natural life around you.
Happy exploring!
Jeff Corwin
Chapter one 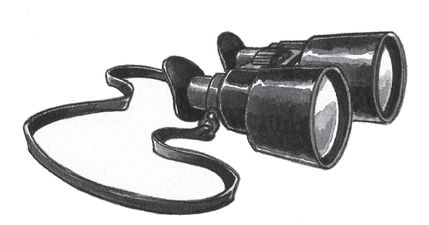 T
e sun was rising and Daisy, a chocolate Lab, was pulling at the end of her leash.
“Please, Mom? Can’t we bring her?” nine-year-old Benjamin Baxter begged as Daisy stopped to sniff a patch of grass. “Dogs go on planes all the time.”
Elizabeth Baxter, Benjamin’s mom, shook her head. “The city’s not a good place for Daisy,” she said. “She’s used to being here in Florida, where she has lots of space to run. In New York, she’d have to spend most of her time indoors. And besides, it’s only for a week.”
Benjamin had heard this before. “But there’d be so much for her to see in New York! I know she’d love it as much as we will! And she won’t get to meet Gabe.” How could it be a family reunion if one member of the family was missing?
Mrs. Baxter put an arm around her son. “We’ll all miss Daisy,” she said. “But we’ll be back before you know it, and Julie will take good care of her. She always does.”
Julie was their neighbor. She had three dogs of her own. Daisy would have plenty of space to run, thought Benjamin, but nobody to give her extra-special attention. He stroked Daisy’s head gently. Leaving Daisy behind was the only bad part about their trip.
In just two hours, the Baxters would be heading off on their first-ever real family vacation. They’d taken plenty of trips before. But Benjamin’s mom was a biologist, his dad was an ecologist, and most of the family’s travel had to do with their jobs. They were always exploring new animal habitats or collecting samples for their labs.
This trip, though, was going to be different. They were going to New York City! They would be staying with Benjamin’s cousin, Gabe, who was nine, just like Benjamin. And they would be visiting the famous sights that Benjamin had seen only in movies or in other people’s photo albums.
Benjamin was excited to think that this time he’d be the kid who brought back souvenirs for his classroom. This time he’d be the one with the inside scoop on a famous museum. For him, this would be a whole new kind of adventure.
Suddenly Benjamin’s mother started running down the street! Every morning they took the dog for a walk together—and every morning his mom found a different creature to watch. “Look, Benjamin!” she cried. “It’s a great blue heron!” Benjamin and Daisy followed, but she had disappeared into a swamp to get a better look at the long-legged, long-necked bird.
The Baxters lived at the edge of the Florida Everglades, a wilderness full of plants and animals you couldn’t see anywhere else in the country. Benjamin’s parents seemed to know everything about the different species of the Everglades, and most of the time Benjamin loved to tag along when they went exploring.
Today, though, he was totally distracted. There was a whole other world in New York just waiting for him, and he was counting the minutes until he got there.
When they got home, Benjamin’s eight-year-old sister, Lucy, was just getting out of bed. “Time to get dressed,” Benjamin’s dad, Sam Baxter, told her when she shuffled into the kitchen. “We’re almost ready to go.”
Lucy was never cheerful in the morning. But she had to be excited about the trip, Benjamin figured, because today she didn’t argue with their dad. She disappeared into her room and came back in a clean T-shirt and a pair of shorts, and with her hair pulled back in a neat ponytail. Lucy put her suitcase by the door and returned to the kitchen to pour herself a bowl of cereal.
“Better get your bag, too,” Benjamin’s dad told him. “Then we can load up the car.”
Benjamin went upstairs to collect his things from his room. He’d packed a lot more than Lucy. There was the stuff he knew he had to bring: clothes and shoes, toothpaste and underwear. And then there was the stuff he really wanted to bring, such as his camera and binoculars, his collecting jars, his notebook and pencils, and his magnifying glass.
He lugged his suitcase, a backpack, and a duffel bag back down the stairs. He wasn’t even at the bottom when Lucy spoke up. “Mom said one piece of checked baggage per person. Remember?” 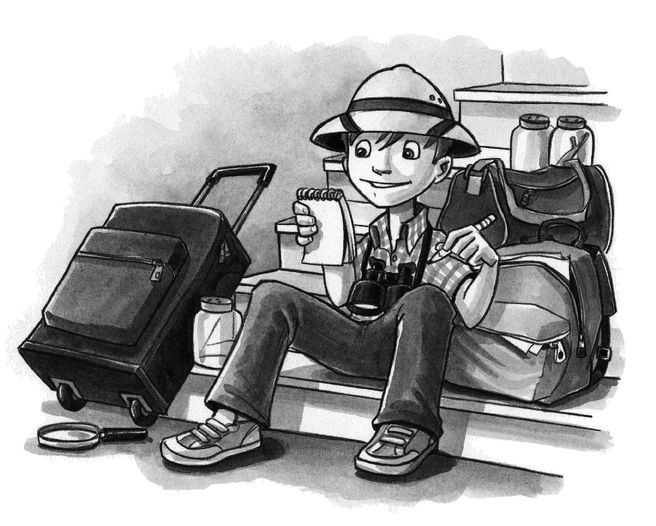 “But I need all my gear,” Benjamin said. “How am I supposed to observe and record New York without it?” His parents were big believers in observing and recording. They said these were the two most important things a scientist could do: watch closely and write down what you saw.
Lucy rolled her eyes. “That’s not what we’re doing this time. The buildings are too tall. . . . The streets are too crowded. . . .” She crunched a bite of cereal. “And what are you going to study, anyway? People in a rush? New neighborhoods? You’re not going to need all that gear for
this
trip.”
Benjamin paused. He hadn’t really thought of it that way. But it was like second nature to him to look at the world like a scientist. So what if he wanted to do it in New York, too? There might not be many new animals to study, but what if he wanted to observe and record other things he saw in the city? Maybe he could even write a report about them when he got home, like his parents always did after one of their nature trips.
“Just because it’s not nature doesn’t mean we can’t take a scientific approach,” Benjamin retorted.
Then his dad stepped in. “The camera and binoculars are a good idea,” Mr. Baxter said, getting back to the matter of the luggage. “I’m not so sure about the other stuff . . . but maybe I can find some extra room in my bag.”