Read You're Mine Now Online 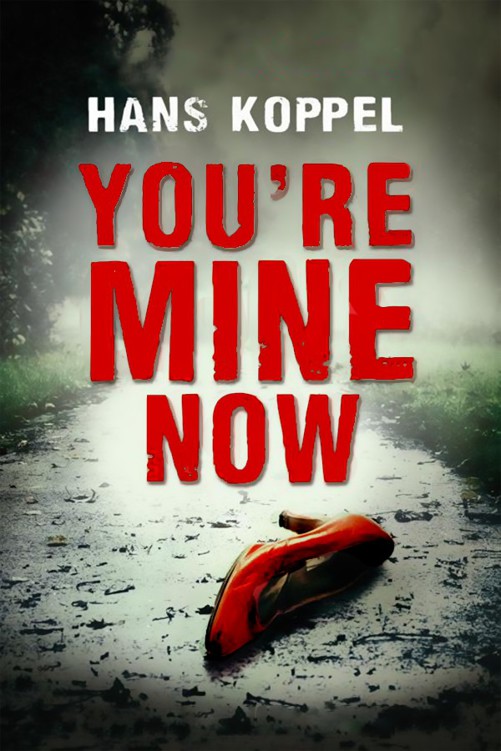 Anna and Magnus have a happy marriage, but when, in a moment of madness,
Anna has a brief fling with Erik, a man she met at a work conference,
she lives to regret more than just her infidelity. Erik is a disturbed
individual who goes to extreme lengths to get Anna's attention,
including kidnapping her ten-year-old daughter and attacking her mother.
Before she knows it, Anna's life is in the grip of this psychopathic
stalker and she must try desperately to escape his clutches before it's
too late...

Hans Koppel is a pseudonym for an established Swedish author who was born in 1964 and lives in Stockholm with his wife and daughter.

There’s a quarter landing halfway up, where the stairs change angle. Erik has fed one of his ropes round the banister upstairs, and is now standing on the ground floor, holding both ends.

His mother watches him with a wine glass in her hand.

‘What are you doing?’

She’s drunk and her tone is accusing.

‘You can’t climb here, the banister won’t hold you.’

‘Did you hear what I said? You’re too heavy.’

‘I wasn’t intending to climb.’

‘Take the rope down then. Erik, darling, listen to me for once.’

He ties a loop at one end.

‘Take it down immediately.’

Erik looks up and then tests it with his body weight.

His mother puts down her wine glass and comes towards him.

‘Do what I tell you,’ she snaps, and puts out her hand to take the rope.

Erik grabs her arm and twists it up behind her back.

He puts the loop over his mother’s head and pulls her up into the air. She struggles to loosen the noose. When she doesn’t manage, she kicks and tries to get her feet on to the balustrade in order to take the weight off her body. Erik holds on to her calves and pulls her down while he holds the rope taut.

‘How old was I the first time?’ he demands.

His mother can’t possibly answer. Her eyes are bulging out of their sockets and her face is swollen and red.

‘Fifteen,’ he tells her. ‘You’ve been doing this for ten years.’

There’s a loud crack. It’s difficult to tell if it’s her neck or the banister that has given way.

His mother’s arms and legs spasm as her body lets go. She hangs freely, swinging silently with no resistance, like a pendulum. Erik holds the rope taut as he goes up the stairs, where he ties the end round the banister. Then he sits down on the sofa and watches TV. When the programme has finished, he calls the police and says that his mother has hanged herself. He finds a knife and cuts her down. He sits down on the floor with her lifeless body in his arms. When the police arrive, he’s crying.

Anna looked at her daughter, who was sitting at the kitchen table, her nose buried in a book, a half-eaten slice of bread in her hand.

‘Please can you get a move on, sweetie? Daddy’s giving me a lift to Mölle and I don’t want to be late.’

Hedda tore her eyes away from the book and looked over at the clock on the wall.

‘Max ten minutes,’ Anna insisted. ‘That’s not a problem, is it? You can look over your homework again.’

‘I’d rather cycle then.’

‘Hello, I can’t cycle when there’s practically no air in my tyres.’

Magnus came out of the bedroom. He was buttoning up a shirt that strained over his belly.

‘Nothing. But if Hedda wants a lift she’s going to have to move it.’

‘We’re not in so much of a rush. It only takes fifteen minutes.’

‘Exactly,’ agreed his daughter, who had no idea.

‘It takes half an hour, at least,’ Anna said.

Magnus pulled his chin in.

‘It certainly does. It’s fifteen minutes just to Höganäs.’

Magnus relented. In the mornings, he was the one who smoothed over the ruffles and backed down. In the evening, it was the other way round. Yet another reason why they worked so well together.

‘Okay,’ he said, turning to their daughter. ‘Poppet, listen to your mother.’

Hedda gave a theatrical sigh and got down from the table with the slice of bread still in her hand. Ten minutes later they dropped her off outside school.

‘See you tomorrow then,’ Anna said.

‘What? Are you staying there overnight?’

‘Just the one night. I’ll be home again tomorrow. You and Daddy can do something nice together tonight.’

Hedda closed the car door and walked towards the main building. They watched her with an amused look, until Magnus slipped into first gear and pulled out.

There wasn’t much traffic. Most cars were going in the opposite direction, from the residential areas along the northern shore in towards Helsingborg. Anna changed the radio station and turned to look at the sea that opened out at Christinelund. The view was wasted today. A greyish-white sky, dull brown fields. The colourless Skåne winter in November, a month that seemed to last for ever.

‘No, just Trude and Sissela.’

Anna had no idea what he was talking about.

‘Didn’t she meet someone new?’

‘That was actually a year ago. And it’s over now.’

He didn’t have much time for his wife’s boss, who he thought was disturbingly self-centred.

‘So she’s single again?’ he asked, trying not to sound disparaging.

‘No, she got back together with her husband.’

‘A few slamming doors, but not much more.’

Anna looked at him.

‘Well, she could have kept quiet about it. I mean, if it was nothing, just a little something. Why upset her husband? All I’m saying is that the one who strays has to deal with the crap themselves. Why burden the poor sod who’s been betrayed with all that rubbish? It’s not fair.’

‘Shameless,’ Magnus maintained. ‘But then she’s the boss.’

‘I think she’s just restless, has to have something happening all the time. She creates drama for the sake of it.’

‘If you decide to stray, I don’t want to know.’

‘No risk of that. It all seems so messy.’

‘So complicated and tedious. Yuck, no, not my thing. And in any case, you smell too good.’

‘Well, there you go, a quality as good as any other. I’ll have to update my CV.’

‘Oof, there’s this new guy in sales,’ Anna continued, with a shiver. ‘And his breath smells like a dog. Pure ammonia. And he always invades your personal space when he talks to you. Touching noses, almost, I swear. And he’s so happy and nice. All you can do really is smile and keep your distance.’

‘You should say something.’

They took the new road past Viken and didn’t have to slow down until they came to Höganäs, where they passed the old publishing house. The business had been bought out many years ago and the new owner soon realised that you couldn’t get the best people to relocate here, so he moved the whole operation to Malmö. Anna wondered whether it still existed.

Anna gave him a blank look and he shrugged.

‘This one’s driven over eight thousand kilometres. It’ll start needing repairs soon. I just think it might be wise.’

‘And the roof?’ Anna asked.

Magnus moved in his seat.

‘We patched it up. And it hasn’t rained since then.’

‘Our car is the oldest one on the street,’ he said, and sent her an accusing look.

Anna looked at him with raised eyebrows.

‘Saying what? That you think we should forget about the roof so we don’t need to be ashamed of a car that’s only four years old?’

‘I just said there wasn’t any rush. The roof is okay.’

‘We repaired it last summer,’ Magnus reminded her. ‘It’s not likely to leak again.’

Anna filled her lungs and closed her eyes.

‘— absolutely no reason to get a new one just to keep up with the neighbours. I’m so sick and tired of all that nonsense.’

Magnus didn’t say anything. Anna prayed that he wouldn’t, that he’d understand it wasn’t worth pushing it. She was hoping for too much.

‘It’s still working fine because it’s relatively new,’ he objected. ‘And that’s why we can still get a good price for it, if we trade it in. If we wait, it will lose value. So we’re losing money by keeping it.’

‘What do you mean, how come? That’s the way it works. If you want to get anything for anything you trade in. It can’t be too old, that’s all.’

‘Would you just listen to yourself?’

‘You don’t get it,’ Magnus said, and changed gear with force. ‘You think it makes financial sense to fix and save. But sometimes it doesn’t. Sometimes you actually have to…’

‘The car is running fine. So please explain to me how we can save money by buying a new one, go on. Convince me that it’s smarter to trade in a car that works than to repair the roof over our heads, which, by the way, is over twenty years old.’

‘You’re not listening,’ he snapped.

‘Magnus, I am listening. But I’m not going to let you…’

They sat in silence.

‘So, how’s Trude then?’ Magnus tried, as they passed the Krapperup Estate.

‘She has to be the second most beautiful woman in the world.’

Anna looked at her husband. Never mind that they argued sometimes, it didn’t take long before they made it up again.

‘Sweetie,’ she said, and put her hand between his legs.
The second most beautiful.

‘Darling, not while I’m driving.’

She studied him, amused.

‘Thought you liked it when I touched you.’

‘Yes, but there’s a time and a place for teenage groping. Now, if I was turn off and stop…’

She looked out of the window to the side.

‘It’s strange with Trude, you know,’ she mused. ‘So beautiful and so smart, and yet she doesn’t believe it. I guess it’s like they say.’

‘The wrong people doubt their own abilities. The arrogant rule the world.’

They sat in silence the rest of the way.

‘Nearly half an hour,’ Anna confirmed, looking at her watch, when Magnus pulled up outside the hotel.

‘Have fun then, darling.’

She leaned forwards and kissed him on the lips.

‘You too. Speak to you this evening.’

Perilous Travels (The Southern Continent Series Book 2) by Jeffrey Quyle
The Black Dress by Pamela Freeman
Jolene 1 by Sarina Adem
To Tempt A Viking by Michelle Willingham
The Story of Britain: From the Romans to the Present by Rebecca Fraser
B00724AICC EBOK by Gallant, A. J.
No Enemy but Time by Michael Bishop
A Right To Die by Stout, Rex
Slow Burn (Book 2): Infected by Bobby Adair
Head of the River by Pip Harry