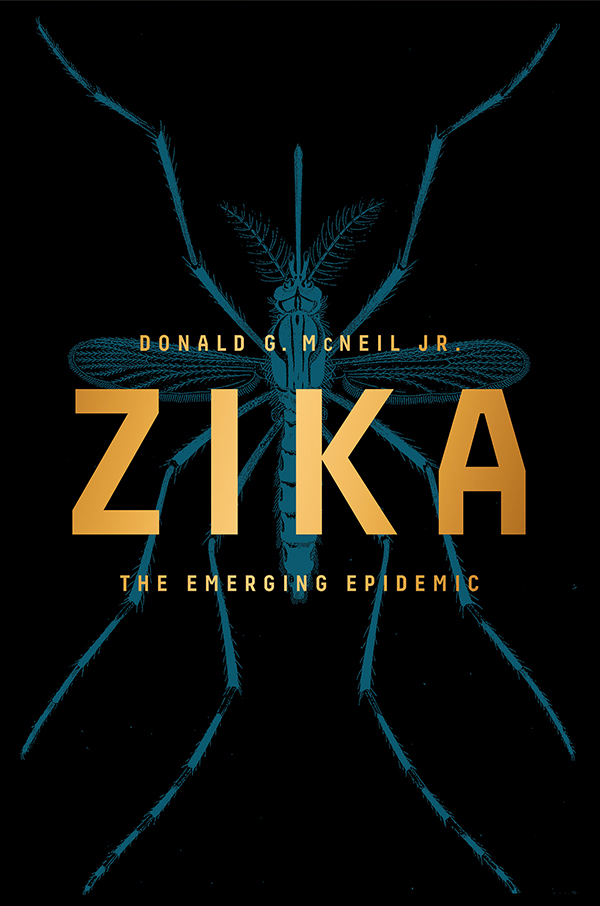 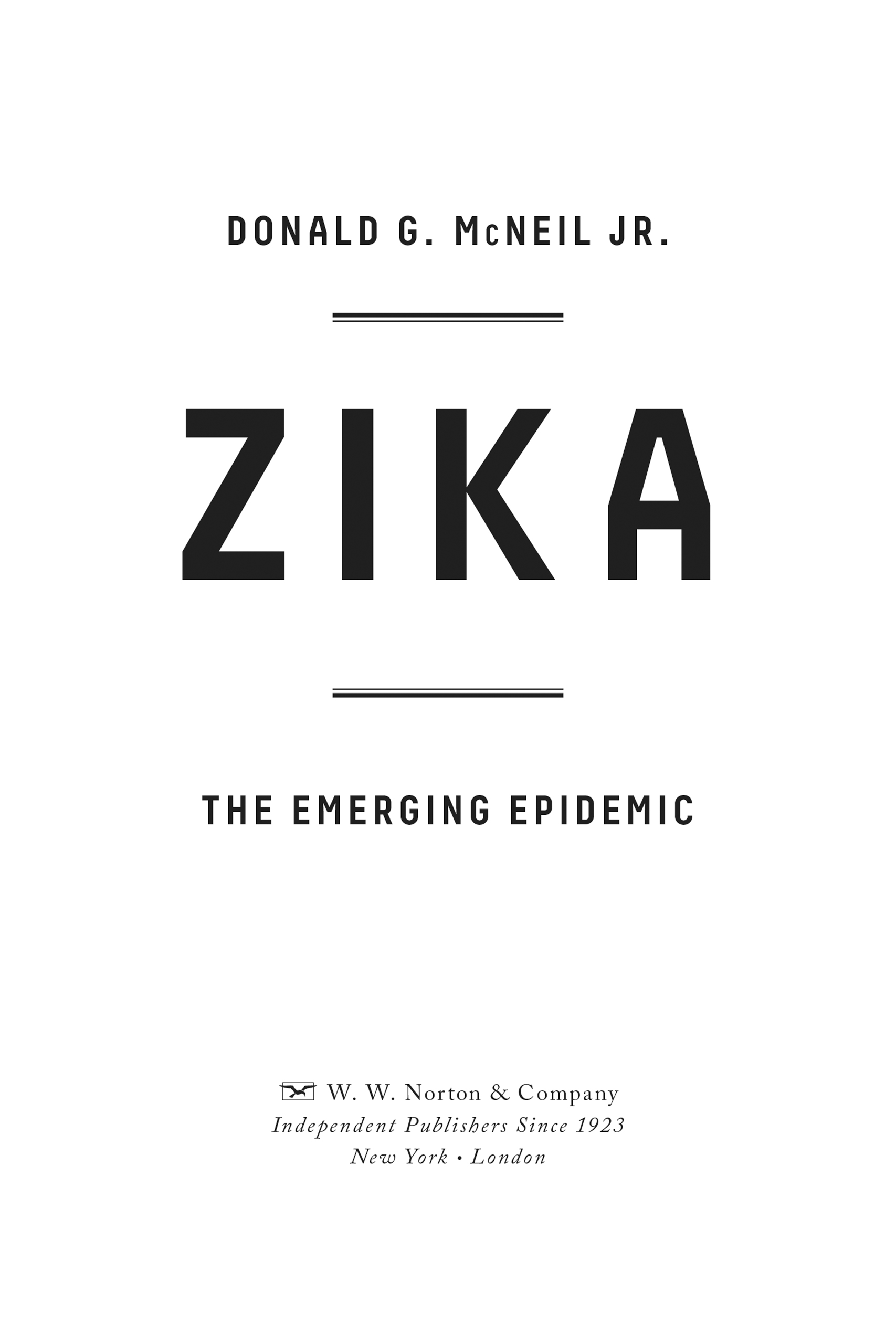 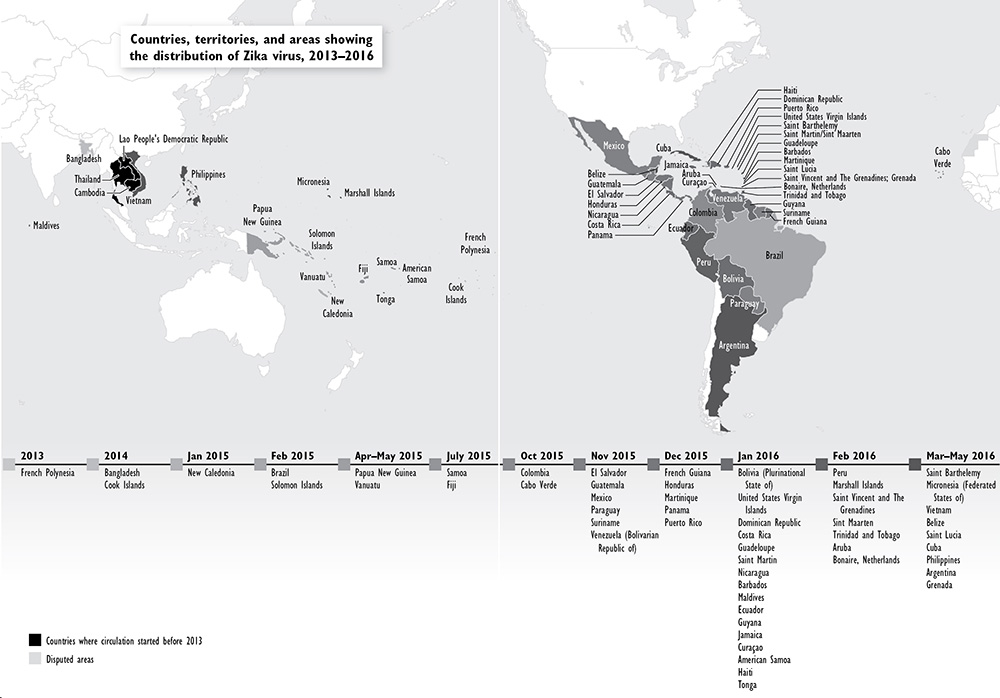 Estimated range of
Aedes albopictus
and
Aedes aegypti
in the United States, 2016. Redrawn from a map from the Centers for Disease Control and Prevention. 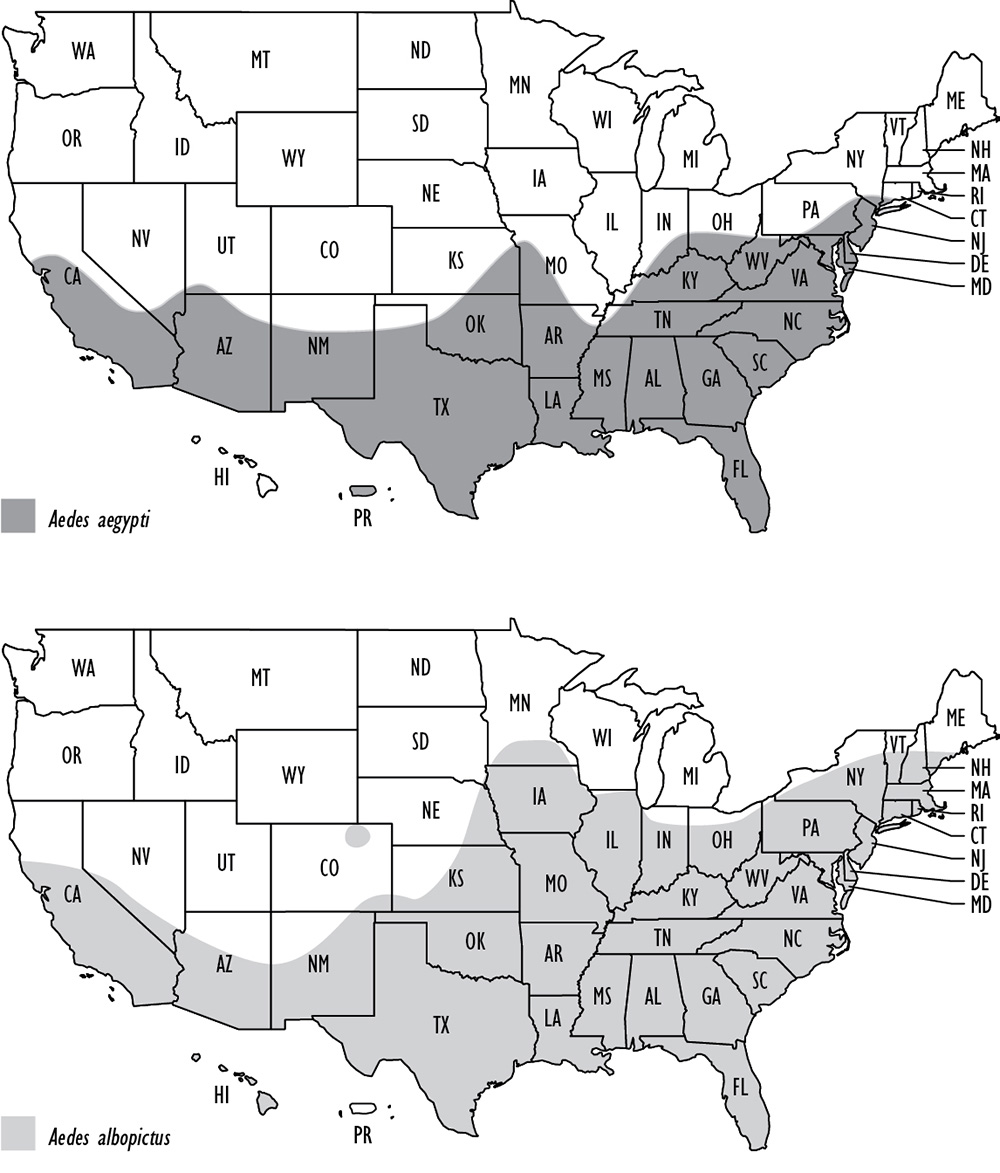 I
N
A
UGUST 2015,
something strange began happening in the maternity wards of Recife, a seaside city perched on the northeastern tip of Brazil where it juts out into the Atlantic.

“Children with normal faces up to the eyebrows, and then you have no foreheads,” she continued. “The doctors were saying, âWell, I saw four today,' and âOh, that's strange, because I saw two.'”

Some of the children seemed to breastfeed well and did not seem to be ill, she said.

Others cried and cried, in a weird, high-pitched wail, as if they were in constant pain and could not be comforted.

Some had seizures, one after the other, their tiny bodies wracked by spasms. If the seizures lasted long enough, they could disrupt the babies' breathing and heartbeat. Those babies often died after a few days.

Others seemed unable to flex their arms and legs, or their eyes jumped around erratically, not seeming to focus, perhaps not seeing anything.

Others did not react to noises and appeared to be deaf.

Others could not swallow. If they did not get intensive care and feeding through nose tubes, they, too, soon died.

As the horrified doctors compared notes, one thing stood out: many of the mothers mentioned that, months earlier, they had had the
doenÃ§a misteriosa
âPortuguese for the “mystery disease”âthat had first appeared nine months earlier in Recife, Salvador, Natal, and Fortaleza, the cities of Brazil's arid northeast.

Back then, the disease had not seemed a big deal. Everyone appeared to have the symptoms: an itchy pink rash; fever and chills; bloodshot eyes; headaches and joint pains.

Nonetheless, many people had gone to local clinics or emergency rooms because they were worried. The symptoms looked like the beginning of a few diseases known to kill people. They looked like early malaria or yellow fever. They looked most like the first symptoms of dengue, a disease Brazilians feared because of its unique power to deliver the double tap: The first time you got dengue, you were miserable. It was called “break-bone fever” because it felt as if someone had taken a sledgehammer to your arms, legs, and neck. Still, you usually recovered. It was the second bout that could kill you. A second infectionâwith a different one of dengue's four strainsâwas worse, and had a chance of turning into dengue hemorrhagic fever. As with Ebola, you bled from your nose and your mouth, under your skin, and from your organs. If you got hemorrhagic fever, you usually died.

And the number of cases was soaring. It was a powerful El NiÃ±o year, with both temperatures and rainfall much higher than normal. The mosquitoes were intense. Brazil had 1.6 million cases of dengue in 2015, nearly triple the 2014 caseload. Everyone knew someone who had had it, and nearly 1,000 would go on to die of it.

But the
doenÃ§a misteriosa
had not been dengue. The rash and fever and headaches were unpleasant, but they did not get worse. No one died of itâunless the person was already seriously ill with something else. Almost no one was hospitalized. People went home from the hospital and told their families, “The doctors say it's not serious. They gave me pills for the headache, and there's no cure. But they say I'll get better in a few days. And, even if the kids get it, they'll be OK.”

It was often misdiagnosed. Rumors attributed it to something in the water. Doctors thought it was an allergy, a parvovirus, or rubeola, or fifth disease, whose classic sign is called “slapped cheek” because it gives children bright red cheeks.

In May 2015, when the Cruz Foundation finally said it was an obscure African virus called Zika, the health minister in Brasilia sighed in relief.
“Zika doesn't worry us,” Dr. Arthur Chioro told reporters. “It's a benign disease.”

There was no way to avoid the mosquitoes, so everyone got it. They groused, they joked, they empathized with each other, but it was just part of life. Things could be worse.

And then the disease seemed to start fading. Everyone had had itâand no one seemed to get it again. So probably everyone was immune.

In fact, the doctors said that. As far as they knew, Zika was like smallpox, chicken pox, or measles: once you'd had it, you never got it again. It hadn't been studied long enough for anyone to be sure it conferred lifelong immunity, but the protection seemed to be quite strong and long-lasting. It was not like dengue, which was worse if you got it again. It was not like malaria, which you could get year after year.

But by then the disease was on the move. From its epicenter in northeast Brazil, it was moving west, into Colombia, Venezuela, and Suriname, and south, toward the megacities of SÃ£o Paolo and Rio de Janeiro, which was struggling to get ready to host the 2016 Olympics. No alarms were raised. Mosquito control efforts, such as they were, continued apace. Compared with the other mosquito diseases aroundâmalaria, yellow fever, dengue, chikungunyaâthis one was mild.

And then, about nine months after the disease had overrun the northeast, the babies began appearing. The babies with the tiny heads.

They gave the first notice that the
doenÃ§a misteriosa
was by no means harmless.

The Origins of the Virus

Z
IKA VIRUS WAS
discovered in 1947, in the Zika Forest of Uganda, in a monkey.

There are hundreds of obscure viruses in the worldâlittle curlicues of RNA with names like Spondweni, simian foamy, and o'nyong-nyong. A nasty one from the Four Corners area of the American Southwest was repeatedly renamed because the locals kept objecting to each moniker. It was first the Four Corners virus, then Muerto Canyon virus, then Convict Creek virus. It is now officially the Sin Nombre virusâSpanish for “no name.”

Dreamers and Deceivers by Glenn Beck
Suitable for Framing by Edna Buchanan
The Pepper In The Gumbo: A Cane River Romance by Hathaway, Mary Jane
Gamble on Engagement by Rachel Astor
Not Dead Enough by Warren C Easley
Dragon's King Palace by Laura Joh Rowland
The Suburban Strange by Nathan Kotecki
Dangerous Inheritance by Barbara Warren
The Lion's Game by Nelson DeMille
The Four-Chambered Heart by Anais Nin