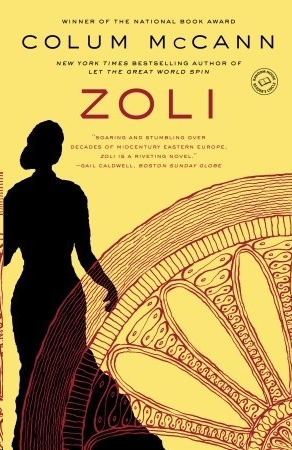 “Soaring and stumbling over decades of midcentury Eastern Europe, Zoli is a riveting novel. … [It has] an inner reality so authentic it could only have come from the matrix of the novelist's imagination…. Colum McCann is blessed with an unlikely mix of an adventurer's spirit and an introvert's compassionate eye. His fiction reflects this sweet incongruity, roaming among life's dispossessed with heartfelt ease…. [Zoli] gives us a tapestry of an entire culture, one shrouded and then marginalized into near extinction.”

“Beautifully written … Beautifully conceived, wonderfully told, the story is proof of an indomitable spirit. The elusive character of Zoli, the brilliant artist, is unforgettable.”

“McCann affirms with Zoli, his fourth novel, that he is a writer with a method and a mission…. The Roma hardships under the Nazis, their hopes and cruel disillusion under Communism, are grittily conveyed in scenes well researched and often grip ping.”

“As Zoli sets off across Europe on foot, stripped of not only the potency of her Romany heritage but the promise of a Utopian future, each new encounter is charged with both futility and wonder.”

“As assured as anything McCann has ever written, rich in vivid detail but wise, too, about the cruelty of the world … McCann allows us to enter a world few of us know anything about…. his prose is just plain gorgeous.”

“Astonishing … a carefully crafted and subtle portrait of one woman's rich and troubled relationship with her people, and with her own Gypsy heart… With a subtle and nuanced appreciation of a culture far different from his own, McCann offers us a place at the Gypsies’ campfire and gives us compelling reasons to stick around and warm up.”

“With a poet's language, McCann creates a haunting story about the pain of exile.”

“McCann vividly animates an insular culture different from our own. Full of dense descriptions of everything from the intri cately carved caravans to the Gypsy women whose hair is sewn with gold coins, [he] tells a very convincing and very powerful story about the strength of community and the bur den of exile.”

“Fascinating and tragic. As in all of his books, McCann nails the hopes and quiet sadness of characters who've been displaced.”

“A great book and a marvelously crafted story. I loved the different angles, the images and the depiction of the Roma. This is life without being sentimental or defensive.”

“If a writer's highest calling is to imagine what it is to be ‘other,’ then Colum McCann is a giant amonst us—fearless, huge-hearted, a poet with every living breath.”

“I review a great many Roma-themed manuscripts for publishers, but none has ever moved me as profoundly as the haunting story of Zoli. With its stark imagery, it takes one deep into the heart of World War II Europe, and for many readers it will be their first introduction to the bleak reality of Romani life. Colum McCann has another winner.”

—I AN HANCOCK,director of the Romani Archives and Documentation Center at the University of Texas at Austin

“Zoli is an assiduously crafted and beautifully haunting story of Europe from one of Ireland's very best novelists. Every book from Colum McCann extends his range and excavates new territories. He is an audacious and wonderfully skilled writer.”

THIS SIDE OF BRIGHTNESS

EVERYTHING IN THIS COUNTRY MUST

Much of this novel was written and esearched while I was a fellow at the orothy and Lewis B. Cullman Center for Scholars and Writers at the New York Public Library. It is dedicated to all of those at the library and to librarians everywhere: thank you.

If you keep quiet, you die. If you speak, you die. So speak and die.

But in our century, when only evil and indifference are limitless, we cannot afford unnecessary questions; rather, we need to defend ourselves with whatever there is to hand of certainty. I know that you remember….

—John BergerAND OUR FACES, MY HEART, BRIEF AS PHOTOS

To get back before dark is the art of going.

H
E DRIVES ALONGSIDE
the small streambed, and the terrible shitscape looms up by increments—upturned buckets by the bend in the river, a broken baby carriage in the weeds, a petrol drum leaking out a dried tongue of rust, the carcass of a fridge in the brambles.

A dog, all bones and scars, noses out in front of the car, and within moments the dog has brought children, crowding up against the car windows. He tries nonchalance as he snaps down the locks with his elbow. One boy is agile enough to jump onto the hood with hardly a noise—he grabs the windshield wipers and spreads himself out. A cheer goes up as two other kids take hold of the bumper and skate behind on the bare soles of their feet. Teenage girls jog alongside in their low-slung jeans. One of them points and laughs, but then stops, still, silent. The boy slides off the hood and the skating kids let go of the bumper, and suddenly the river is in front of him, swirling, fast, brown, unexpected. He yanks the steering wheel hard. Brambles scrape the windows. Tall grass crunches under the wheels. The car swerves back towards the mudtrack, and the children run alongside again in uproar.

On the far bank two old women stand up from where they're washing bedsheets using riverrock and lye. They shake their heads, half-smile, and stoop once more to their work.

He steers around another tight corner, towards a blind line of trees, past the remains of a shattered lettuce crate in the long
grass, and there, across a rickety little joke of a bridge, is the gray Gypsy settlement, marooned on an island in the middle of the river, as if the water itself has changed its mind and flowed either side. Shanty houses. Windowless huts. Jagged pipes and mismatched wood. Thin scarves of smoke rising up from the chimneys. Each roof pockmarked with a satellite dish and patched with scraps of corrugated iron. Far off in the distance a single blue coat flaps in the branches of a tree.

He guides the car into the long weeds, stops, pulls the handbrake, takes a second to pretend that he's looking for something in the glovebox, searches deep, though there's nothing there, not a thing, just a chance to get a small respite. The children crowd the windows. He pushes open the car door, and all he can hear from the settlement across the water is a dozen radios blaring all at once, songs Slovakian and American and Czech.

Instantly the children thumb his sleeve, knuckle his ribcage, pat his jacket pockets. It's as if he has become a dozen hands all at once. “Quit!” he shouts, swatting them away. One boy hops on the front bumper so that the whole car bows to the rhythm. “Okay,” he shouts, “enough!” The older teenagers in dark leather jackets shrug. The girls in unbuttoned blouses step back and giggle. How immaculate their teeth. How quick the silver of their pupils. The tallest of the boys steps forward in a muscle-shirt. “Robo,” the boy says, puffing out his chest. They shake hands and he pulls the boy aside, has a word, face close to his ear. He tries to block the deep smell of the boy, wet wool and raw smoke, and within seconds a deal is struck—fifty krowns— to bring him to the elders and to keep the car safe.

Robo shouts out a warning to the others, backhands the
child who is tiptoe on the rear bumper. They make their way towards the bridge. More children arrive from along the river, some naked, some in diapers, one in a torn pink dress and flip-flops, and the same girl seems to appear from all angles, but in different shoes each time; beautiful, coal-eyed, hair uncombed.

He watches the kids cross the bridge like a strange line of herons, one foot heavy on the solid planks, high-toed and light on the rest. The metal sheets vibrate under their weight. He totters a moment on a piece of plyboard, sways, reaches for a hold, but there is none. The children put their hands to their mouths and snigger—he is, he thinks, every idiot who has ever walked this way. He feels the weight of what he carries: two bottles, notepad, pencil, cigarettes, camera, and tiny recorder, all hidden away deep in his clothes. He pulls the jacket tight and leaps the final hole in the bridge, lands in the soft mud on the far side, just twenty yards from the shanties. He looks up, takes a deep breath, but it's as if a thousand chords have been struck all at once, his ribcage is thumping, he shouldn't have come here alone, a Slovakian journalist, forty-four years old, comfortably fat, a husband, a father, about to step into the heart of a Gypsy camp. He takes a step forward through a puddle, thinking how stupid it was to wear soft leather shoes for this trip, not even good for a quick retreat.

At the edge of the shacks he becomes aware of the brooding men leaning against woodpole doorways. Women stand with hands folded across their stomachs. He tries to catch their gaze, but they look beyond him and away with thousand-yard stares. Strange, he thinks, that they do not question him; maybe they've mistaken him for a policeman or a social worker or a parole officer or some other government fuckwad here on an official visit.

He feels briefly powerful as Robo leads him deeper into the warren of mudroutes.

Doorframes used as tables. Sackcloth for curtains. Empty cucu bottles strung up as windchimes. At his feet, bits of wood and porridge containers, lollipop sticks and shattered glass, the ground-down bones of some dead animal. He catches glimpses of babies hammocked from ceilings, flies buzzing around them as they sleep. He reaches for his camera but is pushed on in the swell of children. Open doorways are quickly closed. Bare bulbs switched off. He notices carpets on the walls, and pictures of Christ, and pictures of Lenin, and pictures of Mary Magdalene, and pictures of Saint Jude lit by small red candles high above empty shelves. From everywhere comes the swell of music, no accordions, no harps, no violins, but every shack with a TV or a radio on full volume, an endless thump.