Read Zombie Ever After Online 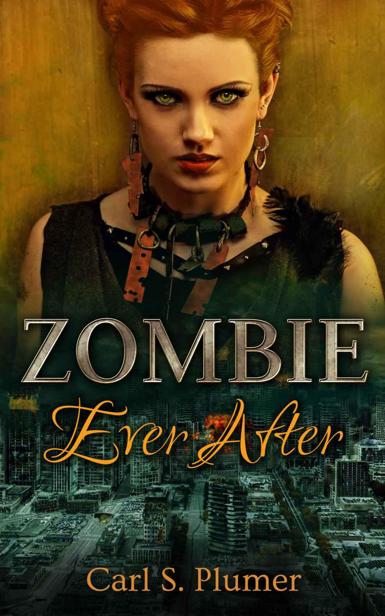 No part of this book may be reproduced in any form or by any electronic or mechanical means, including information storage and retrieval systems — except in the case of brief quotations embodied in critical articles or reviews — without permission in writing from the author at [email protected]

This book is a work of fiction. The characters, events, and places portrayed in this book are products of the author’s imagination and are either fictitious or are used fictitiously. Any similarity to real persons, living or dead, is purely coincidental and not intended by the author. For more information on the author and his works, please visit
www.carlplumer.com

If you liked these stories, why not let others know? Tell your friends. Chat about your favorite scene from this novel on Facebook. Mention the book on Twitter. Perhaps even leave a brief review where you bought the book online. Word-of-mouth is crucial for any author to succeed. Thank you for your support!

Donovan Codell’s eyes snapped open as if, even while in deep sleep, he had sensed danger. Yet, the room was quiet, calm, dark. Well, he was awake now. He sat up and scratched his head as the gray morning sun clawed its way through the living room blinds. Then he forced himself off the couch and stretched.

Yawning, he grabbed his lower back and gave his muscles an absentminded massage. He stood dead on his feet, his whole body aching. He hadn’t slept well on that old couch. The heavy drinking the night before hadn’t helped either. Wearing only his boxers, he shuffled off down the hall to the rear of the apartment.

At his bedroom, Donovan stopped and leaned against the jamb of the open doorway. He crossed his arms and studied the woman still asleep in his bed: Cathren Whitney, a petite, strawberry blonde with gentle features. She had small hands, feet, and breasts. She was in her mid-twenties like Donovan. She still wore makeup. Subtler than last night, however, but noticeable. Like the “morning after” in movies. Or in those mattress ads on TV.

A soft sigh escaped her lips. She turned, opened her eyes, and looked up at him.

They smiled at each other.

Donovan’s stomach stirred at the sound of her raspy, just-woken-up voice. He cleared his throat.

Cathren sat up in bed. “Did you mean it, though? You think I’m pretty?” She ran her fingers through her long hair.

Cathren stretched lazily and the way she slid out of bed was enough to get his imagination going. She walked over to Donovan and, raising herself on her toes, gave him a quick kiss. “I’m going to take a shower.”

“Okay,” Donovan said, his hard expectations shrinking away. She swept past him to the bathroom. The noise of the shower reached him and he soon heard her humming and washing herself. Sighing, he turned around and made his way distractedly down the hall toward the kitchen.

He switched on the coffeemaker and filled the reservoir with bottled water. Then he wandered into the front room and hit the remote. The television awoke, blasting cable news. Ah, the beauty of background noise in the morning. It helped him wake up, keeping him from focusing on his own problems. The events around the world—killings, horrors, disasters—comforted him in a strange way. His difficulties no longer seemed all that weighty. Nothing but your average relationship issues, job stuff, the usual.

Back in the kitchen, he tuned in to the topic under discussion in the front room in a vague way. They were chatting about contaminated water or something. Chemicals in the aquifer (whatever an aquifer was). He poured himself a cup of coffee and scratched his privates as unashamedly as a puppy.

Donovan was sitting at the kitchen table, staring into space, when Cathren crept in. Her hair was wet and wrapped in a towel, and she was carrying a tan cosmetics bag. She sported the same jeans she had on the night before, but with one of his tee shirts on and tied at the hip.

This was the first time in all these years that he’d ever seen her without at least some makeup on. God. She looked incredible.

“There’s coffee,” he said, coming out of his trance.

“Great.” She walked over, poured herself a cup, and gazed out the window as she sipped her coffee.

“Surprising,” Donovan said, breaking the silence. “I never thought I’d see you again, you know? Let alone, we’d be back together.”

Cathren’s gaze snapped to him. “Who says we’re back together?”

Donavan’s throat constricted; he swallowed hard, but kept his gaze steady on her.

Cathren shook her head and let out a weary sigh. “I’m sorry I snapped at you, Don. I shouldn’t have done that. But we need to talk about last night.”

“Let’s leave it alone. Give it time.”

“I’m not sure we’ve got time,” she said, stiffening.

Donovan ran his hands through his hair, his elbows propped on the small kitchen table. He stared into his coffee.

“I don’t understand.” He slumped in the wooden chair, his shoulders sagging. “Our paths crossed last night, so what? We had a few drinks, maybe a few too many, and ended up back here at my place. As it turned out, we didn’t even sleep together.” Thunder growled in the distance. He looked up at her and frowned. “Oh, sorry, I don’t mean to be—”

“What? An ass?” she said, not looking at him. Instead, she studied the nothing that was happening outside. “What a shitty day. What’s happened to the sun lately?” She turned away from the window and back to Donovan. “Look, I know this sounds crazy,” she continued, “but I don’t want to screw this up again.”

Cathren stepped away from the counter and sat down at the table with Donovan. She unzipped her makeup bag and pulled a few small things out, including a lipstick and a compact mirror, then brushed some mascara over her lashes.

Donovan hesitated. “Screw what up?” They’d tried this a few times in the past, but it never worked out, and they always ended up breaking up after a few weeks. Yet, there always was this attraction that never seemed to go away.

“Whatever we want to call this,” she said, waving her finger back and forth between them, “you need to deal with it. Sorry, it’s relationship shit. Not your favorite, I know.” She took a pincher mechanism out of her bag and squeezed her eyelashes as she talked.

They’d screwed this up before, that was true. Breaking up and getting back together more times than Donovan could count.

“Anyway, this isn’t about ‘death do us part’ or anything, so relax,” Cathren said. “I’m just wondering whether we have a real connection or if we’ll just end up killing each other.”

The sky outside filled with murky clouds. Donovan looked around for an opportunity to change the subject. Catching sight of one of his books, he lifted it from the counter and held it up.

“So, um, I have a lesson today,” he said, half mumbling. “This afternoon.”

“A lesson? Impressive. There’s hope yet. What are you taking?”

“God, are you still doing that?”

Donovan laid the book back down on the counter and sighed. “Well, what do you suggest I do instead?”

Oh, no. They weren’t going down this road again.

“Maybe you should try it sometime,” he said. “I could teach you. I’m a good instructor, or so I’m told.”

Cathren switched the device to her other eye before answering. “No, I don’t think so. I don’t like scary things.”

“Come with me today, anyway,” Donovan said, tapping the table like a snare drum. “We could go up after my two o’clock.”

“Okay, fine.” Donovan busied himself by going through the pile of mail while she finished her makeup. “So, you want to get breakfast?”

“At least we have something in common.” Donovan smiled and then, reluctantly, so did Cathren.

Perhaps this can work. She could be right about that connection thing.

Outside, mud-colored clouds rolled through the sky, spitting rain against the kitchen window.

Tonight, we take a look at the strange world of cryogenics, or cryonics as it’s sometimes called. We pull back the curtain on the mysterious man behind ATELIC Industries, the leading organization in the world today in the so-called cryogenics field.

ATELIC, as some of you may not know, stands for—now let me see if I can get this right—Advanced Technologies for Enabling Lifespans to Infinity via Cryogenics.

The company, whose slogan is “We’re Heading Into The Future,” offers the somewhat controversial practice of soaking the pampered heads of the famous, the brilliant, and the wealthy in chemical baths until some future time when humankind may have the technology to literally raise the dead. Unfreeze the heads. Create new bodies. The dead would walk again! However, problems have arisen before that can happen.

Stay tuned. We’ll be right back after this break.

The radio in the car droned on with the same contaminated aquifer story from back at the apartment. Something about people shouldn’t drink the water,
blah-blah-blah
. And more on ATELIC Industries, Inc., whoever they were. Donovan hit the AUX switch, and music from his iPod pumped through the speakers. Dead Kennedys.