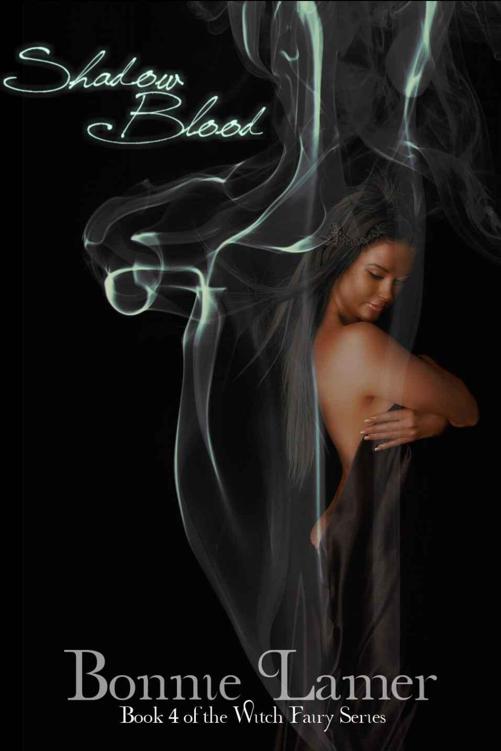 This book is a work of fiction.  Names, characters, places, dialogue and incidents either are the product of the author’s imagination or are used fictitiously, and any resemblance to actual events, locales, or persons, living or dead, is entirely coincidental.

No part of this text may be reproduced, transmitted, down-loaded, decompiled, reverse engineered, scanned or distributed in any printed or electronic form without the express written permission of copyright holder.

Other Titles by Bonnie Lamer

Is there ever any good news anymore?  I remember when life was easy.  I’d get up, trudge to my homeschool classroom, have dinner with the family, and go to bed wishing my life was more exciting.  That was a mistake.  It’s exciting alright.  Now it’s all Witches, Fairies, Shadows and end of the world as I know it doom and gloom.

Okay, maybe it’s not that bad, but it would be nice to have a little break between crises.  My plan for the day had been to go swimming in the warm ocean with Kallen before heading back to my realm and the cold of the Colorado mountains.  I’m betting I won’t be swimming today.  Or tomorrow.  “How do I get them back?”

Isla sighs.  “It will be difficult.”  Of course it will.  “You will need to travel to the Shadow realm and lead your aunt and brother back to their bodies without the Shadows taking yours.”

“My what?”  Yes, I know it seems obvious what she means here, but I’ve learned that with magical people, I need to ask about every little detail.  Less chance of them keeping important little tidbits to themselves like ‘We’re all supposed to blow up tonight, which is why I had you build a giant spider web to protect us,’ or ‘If the protection spell you created is hit by a car, it will feel like
you’ve
been hit by a car.’  That last one really hurt.

“Your body.”  Yeah, that’s what I thought.  But, it still seems like she’s hiding something behind that blank expression she’s wearing.

“Grandmother, from the little I know of the Shadow realm, that would be impossible.  How is Xandra supposed to enter the realm without immediately being killed so her body can be used as a vessel?”  My boyfriend Kallen, he’s always looking on the bright side of things.

“It has never been done before.  I am not sure.”

That’s concerning.  “What do you mean, it’s never been done before?”

Isla sighs.  “No one has ever
wanted
to travel to the Shadow realm before.”

“Is it really that bad?”

I don’t like monosyllabic answers.  That’s never a good omen for me.  “Why is it so bad?”

Isla doesn’t look like she wants to answer me, so Tabitha does.  “The Shadows are pure evil scraped from the souls of the dead.”

Ouch.  “What do you mean, scraped from the souls of the dead?”  Another in a long line of questions I don’t really want answered.  But, it is, anyway.

Tabitha’s mouth is in a grim line.  She hesitates a moment before saying, “When a body dies, the Angels of Death cleanse the soul of all of its darkness.  For some, it is a very small amount.  For others, a good deal of their soul is taken.  The darkness is then sent to the Shadow realm.”

“What happens to the soul?”

Sounds like Buddha got a few things right.  “You mean, if I have a lot of darkness on my soul, I could come back as a dog or something?”  Hmm, now that I’ve said it out loud, it doesn’t sound half bad.  My life would certainly be less stressful as a cocker spaniel.

“Or a toad,” Kallen says barely hiding his smirk.  I narrow my eyes in his direction, but I refrain from commenting.  “Ow!”  Tabitha smacked him in the back of the head. I love her.  I grin at him while he rubs his head.

“That is correct,” Tabitha nods.

“So, these pieces of souls with darkness on them, they can still think and move around and stuff?”  I’m beginning to understand why no one wants to go to the Shadow realm.

“They combine their energies and grow into fearsome entities of pure evil,” Isla says.

“So, the Shadow realm is basically hell.”

“I have to go to hell to get my brother and aunt back with no plan, no knowledge of what the realm is like, and not knowing how to get back?”  Piece of cake.  Nothing could possibly go wrong with this scenario, right?  I’m going to take the resounding silence in the room as a yes to all of the above.

Wow, this is seriously my life?  Really?  I guess I have to learn to accept that things really aren’t going to be ‘normal’ for me ever again.  Would it be wrong to bang my head on the counter as I try to force this fact into my head?  Because I really, really want to.  I think I have to at least once.  Ouch, that hurt.

“Xandra?” Kallen says when I don’t lift my head back up.  “What are you doing?”

“And you have to bang your head on the table to do that?”

“Okay.  Do you think you will be joining us again anytime soon?”

With a resigned sigh, I sit up straight on my stool again.  “What do I do first?”

“Xandra…” Kallen begins with a look in his eye that tells me he’s going to argue, but I don’t let him finish.

He chuckles.  “I know you are.  I was simply going to say that you are not going without me.”

“Alright, I will lounge back here soaking up rays on the beach while you go off alone to fight evil in the depths of hell.”  Smack.  Rubbing the back of his head again, he says to Tabitha, “I was teasing her.”  If she keeps this up, Kallen’s going to end up with a concussion soon.

“This is no time for teasing,” Tabitha tells him but I think she’s trying to hide a smile.

“The first thing we need to do is contact your parents and then figure out a way to get them, and the bodies of your aunt and brother, through to this realm.”

I cast a spell preventing anyone but myself from travelling between realms.  Sort of.  “Um, that won’t be a problem.  I kind of only took the ability to travel from realm to realm away from Fairies.  Except Kallen.”

Now I have two sets of vibrant green eyes narrowed in my direction and another pair that looks amused.  I suspect this is an instance where Kallen’s not going to have my back.  He didn’t have to move his stool back away from the island counter, though.

“That is quite the little detail you forgot to mention,” Isla says evenly.  I can’t tell if she’s showing so many teeth because she’s smiling, or because she’s going to tear me apart with them.  I think I’m pretty safe in assuming it’s not a smile.

“What are you all doing up?” Kegan asks from the kitchen doorway, saving me at least for the moment from Isla’s wrath.  “I thought you went to bed a couple of hours ago.”

Kegan looks from me, to Isla, and back to me.  Instead of sitting on the stool next to me, he picks it up and moves it next to Kallen, who is now about four feet away from the counter because he keeps inching backwards.  Sitting down, he asks Kallen, “Does she know that the more teeth you can see, the madder Grandmother is?  What did she do?”  And then he starts laughing.  “Do not tell me you already have to move from being left hand-fasted to right hand-fasted.”

“I wish,” Kallen mumbles under his breath and smirks.

Glaring at both of them now, I pull magic.  Kallen senses it, but he’s not quick enough to react.  Both of their stools shoot out from under them, and they tumble to the powder blue, ceramic tiled floor.  Now, it’s Kallen’s turn to glare.  “Was that necessary?”

Isla clears her throat, bringing our attention back to her.  “Getting back to the topic at hand…”  I can see about twenty teeth.  That can’t be a good thing.  “Since it is possible for Witches and Cowans to transverse realms, perhaps we should proceed with contacting your parents.”

Kegan sits back on the stool he just put upright.  “Witches and Cowans?  I thought Xandra…”

“We all did,” Isla practically growls.  Kegan moves his stool even farther back from the counter.

“I’m sorry I didn’t tell you.  I just wanted my family to be able to come here if they wanted.  You know, in case there’s ever a reason…”  I don’t finish the sentence but my cheeks turn bright red as I bite my bottom lip.

Isla’s eyebrows travel up her forehead and she looks at me expectantly.  She’s not going to let me off the hook on this one.  “Fine, in case Kallen and I do ever get right hand-fasted.”  He and I are left hand-fasted so that we can get away with being as close as we want to be. But, if we ever have sex, a magical compulsion spell with force us to become right hand-fasted.  Which, by Fae law, is literally until death do you part.  I’m not ready for that commitment, so Kallen and I are trying really, really hard to be good.

“Aw, that is so disgustingly sweet,” Kegan says.  Kallen punches him hard in the arm in response.  There’s a lot more hitting in this realm than I’m used to.  But, that doesn’t mean that I disagree with it.

“Xandra,” Isla says, standing up from her stool.  I think she’s trying not to sound as mad as she is.  If that’s the case and this is her nice voice, I think her level of anger must be somewhere around ground zero of a nuclear explosion.  She gestures towards the main living room, which is a huge room filled with cozy furniture arranged in varying patterns for both intimate conversation and idle chatting.  It opens onto a stone terrace and then the beach.  “After you.”

Hmm, do I really want to walk ahead of her in her current state of mind?  Then again, this is Isla.  If she was planning to do something to me, she’d make sure I saw it coming.  She wouldn’t attack me from the back.  That thought firmly in my mind, I walk quickly to the terrace steps and the sandy shore.  Tabitha, Kallen and Kegan are right on our heels.

“Is she really going to open a gateway?” Kegan asks and there’s more than a little awe in his voice.  At least someone’s impressed with me right now.

“Yes, with the sole purpose being to send you through it,” Kallen smirks.  He almost moves in time to avoid the punch in the arm.  He’s too slow.  Ouch.  That one looked like it hurt.  Maybe Kegan’s a little worried there may be some truth in what Kallen said.  He did hit on me the other night making both Kallen and me angry.

“Boys, you behave or I will shove you both through and let you stew there for a few years,” Tabitha says sternly.  I’d believe her if it wasn’t for the amused twinkle in her eyes.

Love in the Mist (MacKay's) by Roddy, S.R.
In the Shadow of the American Dream by David Wojnarowicz
Second Chances by Clare Atling
Within This Frame by Zart, Lindy
A Match Made in Mystery by JB Lynn
The Many Deaths of Joe Buckley by Assorted Baen authors, Barflies
Falling for the Wingman (The Kelly Brothers, Book 3) by McHugh, Crista
A New Dawn Over Devon by Michael Phillips
Daniel Taylor Between Two Worlds by Monica Davis
Feathers in the Fire by Catherine Cookson