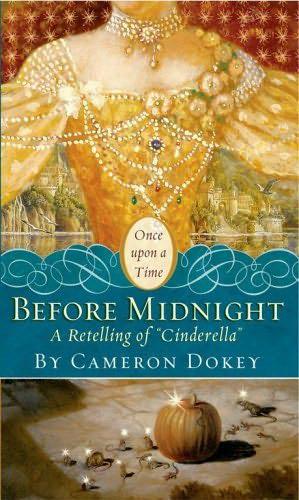 “
Married!” I exclaimed. I put a hand out, as the world
began to whirl and felt Niccolo’s hand grasp mine.
“
My father is married? When did this happen?”

“
J
ust last week,” Niccolo said, “Chantal de Saint-Andre is your stepmother’s name. She is a wealthy widow, and a ward of the crown. None may marry her but by the kings command.”

“And now the king has married her to my father?” I said. I knew I sounded stupid, but I could not seem to get my brain to function. “But why?”

“That,” Niccolo said succinctly, “is the question to which all the court would like an answer. Your new stepmother and stepsisters most of all.”

“Stepsisters!” I cried. “I have stepsisters?”

“Two,” Niccolo answered, “Their names are Amelie and Anastasia.”

“I think,” I said faintly, “that I would like to sit down,” In fury and desperation, I had wished for a mother and two sisters. And now my father was married, and his wife and two stepdaughters were on their way to my door.

“O
NCE UPON A
T
IME”
IS TIMELESS WITH THESE RETOLD TALES:

The text of this book was set in Adobe Jenson.

What do you know about yourself? What are your stories? The ones you tell yourself, and the ones told by others. All of us begin somewhere. Though I suppose the truth is that we begin more than once; we begin many times. Over and over, we start our own tales, compose our own stories, whether our lives are short or long. Until at last all our beginnings come down to just one end, and the tale of who we are is done.

This is the first story I ever heard about myself: that I came into this world before my time. And that my coming was so sudden, hot, and swift, it carried everything before it away, including my mother’s life.

Full of confusion was the day of my birth, of portents, and of omens. Just at daybreak, a flock of white birds flew across the face of the sun. Its rising light stained their wings bloodred. This was an omen of life taking flight.

At full noon, every single tree in every single orchard on my father’s estate burst into bloom at once, in spite of the fact that it was October. This was an omen of life’s arrival.

At dusk, a great storm arose, catching everyone
by surprise. My mother was in her garden, the one she planted and tended with her own two hands, when two claps of thunder, one from the east and the other from the west, met above her head in a great collision of sound. The earth shook beneath her feet. Crying out, my mother tumbled to the ground. What this portended nobody ever did decide, because it was at precisely this moment that I declared my intention to be born.

Fortunately for my mother, she was not alone. The healer, Old Mathilde, was with her, as she often was when my father was away from home. Just how old Old Mathilde is, no one really knows. But no matter what her years, she was strong and hale enough to lift my mother up and carry her indoors—through the gate in the garden wall and around the side of the house, up the steps to the front door, and across the great hall. Then, finally, up a wide set of stairs from the great hall to the second floor. By the time Old Mathilde reached my mother’s chamber, it was storming in earnest, and she, herself, was breathing hard. The wind wailed like a banshee. Hailstones clattered against the roof with a sound like military drums.

Old Mathilde set my mother gently on the bed, paused to catch her breath. Then she summoned Susanne, who worked in the kitchen, instructing her to bring hot water and soft towels. But when Mathilde went to stir up the fire, the wind got there first, screaming down the chimney, putting out the fire. Not content to do this in my mother’s room
alone, the wind then extinguished every other fire throughout my father’s great stone house by the sea, until not so much as a candle remained lit. All the servants quaked in fear. The women buried their heads beneath their aprons, and the men behind their arms, for nobody could remember such an event ever occurring before.

And so it was first in shadow, and then in darkness, that Old Mathilde and my mother strove to bring me into the world. Just before midnight, I arrived. At my coming, the storm ceased as suddenly as it had begun. A great silence filled the great stone house. Into it came the loud voice of the sea, and then my mother’s quiet voice, asking Old Mathilde to place me in her waiting arms. She asked this just as the clocks throughout the house began to strike midnight: the only hour in all the world that begins in one day and ends in another. This was the moment I knew my mother’s touch for the first and only time.

And this is the story Old Mathilde has told me each and every time I asked her to: that, with my green eyes, I gazed up, and with her green eyes, my mother gazed back down. She ran one hand across my head, her fingers lingering on my bright red hair, for this, too, was the exact same shade as her own. Then she bent her head and pressed a kiss upon my brow. I carry the mark of it to this day, the faintest smudge of rose just at my hairline.

“Mathilde,” my mother said then, and with the sounding of her own name, Old Mathilde understood
what my coming into the world before my time would cost. For she recognized the sound my mother’s voice made—a sound that was both less and more than it had ever been before.

Billionaires Meet Millionaire (A Steamy Romance) by Jason Vasha
On The Prowl by Cynthia Eden
Enchanted Ever After (Mystic Circle) by Owens, Robin D.
Hot Pursuit by Lynn Raye Harris
The Last Nightingale by Anthony Flacco
The Love Knot by Sheppard, Maya
Have Mercy by Caitlyn Willows
Mortal Danger by Eileen Wilks
Nightbird by Alice Hoffman
Two Under Par by Kevin Henkes