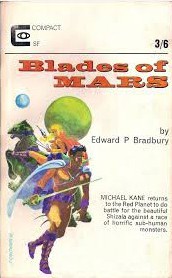 (Lord of the Spiders)

For Henry Morrison
and Robert Silverberg

‘We must not fail!' I looked up sharply. The
speaker was a handsome giant of a man with burning, diamond-blue eyes. He was
bending over one of the strangest devices I had ever seen. About the size of a
telephone box, it was covered with dials and switches. A large coil suspended
above it pulsed with power and on the right, in a dark comer, a dynamo of
unusual design fed it with energy.

The tall man sat in a kind of cradle affair
that was also suspended from the roof of the makeshift laboratory -really the
cellars of my
Belgravia
house. I stood beneath the cradle, reading
out to him the information given on the dials.

We had been at work on the machine for many
weeks -or rather he had been at work. I had merely put up the money for the
equipment he needed, and followed his instructions in doing the simple tasks he
permitted me to do.

We had met fairly recently in
France
, where he had told me a strange and wild
story about his adventures in - of all places - the planet Mars! There he had
fallen in love with a beautiful princess of a city called Vamal of the Green
Mists. He had fou^t against gigantic blue men called the Argzoon, finally succeeding
in saving half a continent from their savage domination.

Put as baldly as this, the whole thing sounds
like the paranoiac ravings of a madman or the lurid lies of a smooth-tongued
tale-teller. Yet I believed it - and still do.

I have already recounted this first meeting
and what became of it - of how Michael Kane, the man who now 139 worked in the
cradle suspended above my head, had been a physicist in Chicago doing special
research on something he called a 'matter transmitter'; of how the early
experiment had gone wrong and he had been transmitted not to another part of
the lab, but to Mars.

It was a Mars, we believed, eons in the past,
a Mars that thrived before Man ever walked this planet, a Mars of strange
contrasts, customs, scenery - and beasts.
A Mars of warring
nations possessing the remnants of a once mighty technical civilisation - a
Mars where Kane had come into his own.
An expert swordsman, he had been
a match for the master swordsmen of the Red Planet; a romantic despising his own
dull environment, he had rejoiced at the luck which fate brought him.

But fate - in the guise of his fellow
scientists - had also brought him back to Earth - back to here-and-now, just as
he was about to marry his Martian sweetheart! The other scientists in
Chicago
had adjusted the fault in the transmitter
and managed to recall Kane. One moment he had been sleeping in a Martian bed -
the next he was back in the laboratory looking into the smiling faces of his
fellow researchers! They thought they had done him a favour!

No one had believed his story. This brilliant
scientist had been discredited when he had tried to convince the others that he
had really been to Mars - a Mars that existed millions of years ago! He was not
allowed near his own invention and he was given indefinite 'leave of absence.'
Weighed down with despair of ever seeing his beloved Mars again, Kane had taken
to wandering the world, aimlessly, thinking always of Vashu - the native name
for Mars.

Then we had met by accident in a small caf6
overlooking the French Mediterranean. He had told me the whole story. At the
end of it I had agreed to help him build privately a transmitter similar to the
one in
Chicago
so that, with luck, he would be able to
return.

And now his device was almost ready!

'We must not fail!’ He repeated the phrase,
speaking half to himself as he worked with frowning concentration.

He would be taking his life in his hands if
the experiment went wrong. He could have been flung through time and space at
random the first time - he had only the flimsiest evidence to support his
theory of spacio-temporal warp 140 being affected by a special tuning of the
transmitter, tuning which had existed during the first experiment. I had
reminded him of this - that even if the transmitter worked there was scant
likelihood of it sending him to Mars again. Even if it did send him to Mars,
what chance was there of it being the same Mars of the time he had left?

But he held to his theory - a theory based, I
felt, more upon what he wished than what actually was - and he placed all his
faith on it working - if he picked the right time of year and day, and the
right geographical position.

Apparently a spot near the city of
Salisbury
would be ideal - and tomorrow at eleven-thirty
p.m. would be an excellent time. That was why we worked with such frantic
haste.

So far as the actual equipment was concerned,
I was sure it was all right I did not pretend to understand his calculations
but I trusted his character and his reputation as a physicist

At last Kane looked away from the cone he*d
been tinkering with and fixed me with that melancholy yet burning gaze with
which I had become so familiar.

"That's it,' he said. ‘There's nothing
else we can do except ship it to our location. Is the power-wagon ready?’

‘It is,’ I replied, referring to the
transportable dynamo we would use to power Ms
device
.
'Shall I phone the agency?’

He pursed his lips, frowning. He swung himself
out of the cradle and dropped to the floor. He looked up at his brain-child and
then his face relaxed. He seemed satisfied.

'Yes. Better phone them tonight rather than
the morning.' He nodded.

I went upstairs and put through a call to the
employment agency, who were hiring us the 'muscle-power' we needed to get our
equipment to its ultimate destination on Salisbury Plain. The men would be at
my front door in the morning, the agency assured me.

When I returned I found Kane slumped in a
chair, half asleep.

'Come along, old man,* I said. 'You'd better
rest now or you'll be unable to do your best tomorrow.'

He nodded mutely and I helped him upstairs to
bed. Then I retired myself.

Next morning the men arrived with a large van.
Under Kane's somewhat nervous supervision the matter-transmitter 141 was taken
out and secured inside the van.

Then we set off for
Salisbury
with me driving behind the larger vehicle
in what Kane had chosen to call our power-wagon.

We had selected a spot not far from the famous
Circle of Stones,
Stonehenge
. The great primitive pillars - thought by
many to be one of the earliest astronomical observatories - stood out boldly in
the sharp light of early morning.

We had brought a large tent to protect our
equipment both from the weather and from prying eyes. We erected this with the
help of the men, who then drove off with our instructions to return with their
van in the morning.

I was a restless day and the wind beat at the
canvas of the tent as Kane and I worked to set up the equipment and give it a
few tests to make sure it was working efficiently. This took us the best part
of the day, and night was falling as I went to the van to switch on the dynamo
in order to test the transmitter.

As the hours slipped by.
Kane's face set more and more grimly. He was tense and kept reminding me of
what I had to do when the time came. I knew it by heart - a simple business of
checking certain instruments and pressing certain switches.

Shortly before eleven-thirty I went outside.
The moon was high, the night wild and stormy. Great banks of black cloud
scudded across the sky. A night of portent!

I stood there smoking for a few
minutes,
huddled in my overcoat My mind was half numb from
the concentration of the previous weeks. Now that the experiment was about to
take place I was almost afraid - afraid for Kane. He stood to lose if not his
life, at least his hopes if we failed.
And with the loss of
hope.
I felt. Kane would cease to be the man I admired.

He called to me from inside the tent.

When I went back I could see that his normal
calmness was still not so apparent, partly due to his near-exhaustion, partly
to evident realisation of the same things I had been dunking.

I stamped out my cigarette and looked at the
weird machine. The matter transmitter was alive now, humming J42 with power.
The scanner-cone at the top
glowed
a ruby red, giving
the interior of the tent a bizarre appearance. Reflected in this glow, Kane's
handsome face looked like that of some noble but unearthly demigod.

‘Wish me luck.' He smiled with an attempt at
Tightness. We shook hands.

He entered the transmitter and I closed the
panel behind him, sealing it shut. I glanced at my watch. One minute to go. I
dared not think - dared not consider, now, what I was about to do!

As the seconds ticked by I carefully recalled
all his instructions, studied the instruments as needles quivered and dials
glowed. I reached out my hand and depressed a button, flicked a switch. Simple
actions, but actions which could either kill a man or consign him to limbo,
either physical or mental.

There came a sudden, shrill note from above
and the needles flickered frenetically. I knew what it meant. Kane was on his
way!

But where?
When?
Perhaps I would never know! But now it was done. I walked slowly from the tent.
I lit another cigarette and smoked it. I thought about Kane, about his tales of
high adventure and romance on an ancient planet. I wondered, as I had done
before, if I had been right to believe him and help him. I wondered if I had
been wrong.

Also I felt a loss - as if something strong
and important had been removed from my life. I had lost a friend. Then,
suddenly, I heard a voice from within the tent! With a shock I recognised
Kane's voice - though now it had a different note to it.

So we had failed. Perhaps he had not gone
anywhere. Perhaps his calculations had been wrong. Half in relief and half in
trepidation, I stumbled back into the tent - to receive another shock! The man
who stood there was almost naked. It was Kane - but not the Kane with whom I
had shaken hands only minutes before.

I stared in astonishment at this apparition.
It was clad in a leather harness of some sort, and it was decorated with
strange, glowing gems which I could not recognise as any I knew. Across the
broad, muscular shoulders was draped a light cloak of a wonderful blue colour.
At its left hip the figure wore a long sword with a basket hilt - a sword
suspended from a wide loop of thick leather but naked, unscabbarded. On his
feet were heavy sandals laced up the calves to just below the knee. His hair, I
now noticed, was longer, too. Upon his body were scars, some old and some
fresh. He smiled strangely at me, as if greeting an old acquaintance from whom
he had been separated for some time.