Read 2 States The Story Of My Marriage Online

2 States The Story Of My Marriage 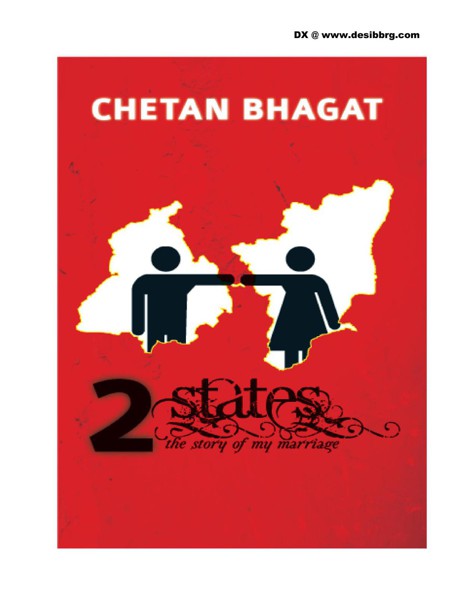 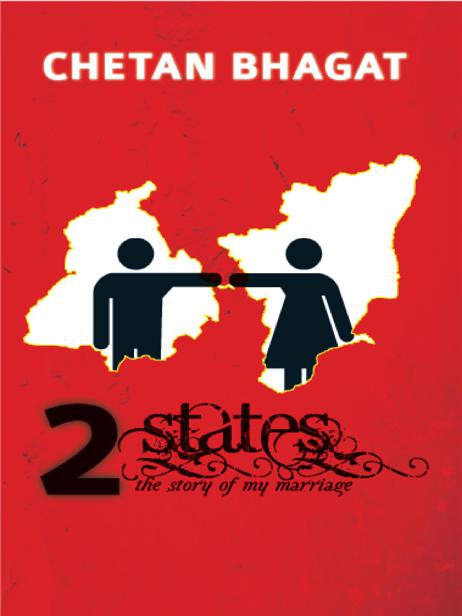 This eBook is exclusively made by

THE STORY OF MY MARRIAGE

Love marriages around the world are simple:

In India, there are a few more steps:

Girl and Boy still love each other. They get married.

Welcome to 2 States, a story about Krish and Ananya. They are from

two different states of India, deeply in love and want to get married. Of

course, their parents don’t agree. To convert their love story into a

love marriage, the couple have a tough battle in front of them. For it is

easy to fight and rebel, but it is much harder to convince. Will they

make it? From the author of blockbusters Five Point Someone, One

Night @ the Call Center and The 3 Mistakes of My Life, comes another

This may be the first time in the history of books, but here goes:

Dedicated to my in-laws*

*which does not mean I am henpecked, under her thumb or not man

She didn’t react. Just gestured that I remove my shoes and take the couch.

She had an office like any other doctor’s, minus the smells and cold, dangerous

She waited for me to talk more. I hesitated and spoke again.

dump their boyfriends everyday. Hardly the reason to see a shrink, right? What

“No, I am the psycho. Psychotherapist to be precise. If you don’t mind, I prefer

that to shrink,” she said.

“It’s OK,” she said and reclined on her chair. No more than thirty, she seemed

young for a shrink, sorry, psychotherapist. Certificates from top US universities

adorned the walls like tiger heads in a hunter’s home. Yes, another South Indian

“I charge five hundred rupees per hour,” she said. “Stare at the walls or talk.

I had spent twelve minutes, or a hundred bucks, without getting anywhere. I

wondered if she would accept a partial payment and let me leave.

“OK, Neeta, I don’t think my problem warrants this. I don’t know why Dr.

She picked my file from her desk. “Let’s see. This is Dr. Ram’s brief to me –

patient has sleep deprivation, has cut off human contact for a week, refuses to

eat, has Google-searched on best ways to commit suicide.” She paused and

looked at me with raised eyebrows.

“The report says the mere mention of her name, her neighbourhood or any

association, like her favourite dish, brings out unpredictable emotions ranging

from tears to rage to frustration.”

“I had a break-up. What do you expect?” I was irritated.

“Sure, with Ananya who stays in Mylapore. What’s her favourite dish? Curd

I sat up straight. “Don’t,” I said weakly and felt a lump in my throat. I fought

“Fuck minor. It’s killing me.” I stood agitatedly. “Do you South Indians even

know what emotions are all about?”

“I’ll ignore the racist comment. You can stand and talk, but if it is a long story,

take the couch. I want it all,” she said.

I broke into tears. “Why did this happen to me?” I sobbed.

She passed me a tissue.

“Where do I begin?” I said and sat gingerly on the couch.

“Where all love stories begin. From when you met her the first time,” she said.

She drew the curtains and switched on the air-conditioner. I began to talk and

get my money’s worth.

She stood two places ahead of me in the lunch line at the IIMA mess. I checked

her out from the corner of my eye, wondering what the big fuss about this South

Her waist-length hair rippled as she tapped the steel plate with her fingers like
a famished refugee. I noticed three black threads on the back of her fair neck.

'Ananya Swaminathan---best girl in the fresher batch,'
seniors has already anointed
her on the dorm board. We had only twenty girls in a batch of two hundred. Good-looking ones were rare; girls don't get selected to IIM for their looks. They get in
because they can solve mathematical problems faster than 99.99% of India's

population and crack the CAT. Most IIM girls are above shallow things like make-

up, fitting clothes, contact lenses, removal of facial hair, body odour and feminine
charm. Girls like Ananya, if and when they arrive by freak chance, become instant

than she had in her entire life. Thus, I assumed she'd be obnoxious and decided

care if they were serving prisoners or future CEOs. They tossed one ladle of

yellow stuff after another into plates. Of course, Ms Best Girl needed the

'That's not rasam. Whatever it is, it's definitely not rasam. And what's that, the
dark yellow stuff?'

'Eew, looks disgusting! How did you make it?' she asked.

'You want or not?' the mess worker said, more interested in wrapping up lunch

While our lady decided, the two boys between us banged their plates on the

counter. They took the food without editorials about it and left. I came up right

behind her. I stole a sideways glance - definitely above average. Actually, well above
average. In fact, outlier by IIMA standards
.
She had perfect features, with eyes,
nose, lips and ears the right size and in the right places. That is all it takes to

She looked like Sridevi's smarter cousin, if there is such a possibility.

The mess worker dumped a yellow lump on my plate.

'Excuse me, I'm before him,' she said to the mess worker, pinning him down

with her large, confident eyes.

'What you want?' the mess worker said in a heavy South Indian accent. 'You

calling rasam not rasam. You make face when you see my sambhar. I feed

hundred people. They no complain.'

'And that is why you don't improve. Maybe they should complain,' she said.

hands. 'You want complain? Go to mess manager and complain....see what

student coming to these days,' the mess worker turned to me seeking sympathy.

I took a spoonful of sambhar. Warm and salty, not gourmet stuff, but edible in

a no-choice kind of way. I could eat it for lunch; I had stayed in a hostel for four
years.

However, I saw her face, now prettier with a hint of pink. I compared her to the
fifty-year old mess worker. He wore a lungi and had visible grey hair on his chest.

When in doubt, the pretty girl is always right.

'See,' she said with childlike glee.

The mess worker glared at me.

'But I can develop a taste for it,' I added in a lame attempt to soothe him.

The mess worker grunted and tossed a mound of rice on my plate.

campus had stared at her in the past few days. I had to appear different.

'Give me the rasgullas,' she pointed to the dessert.

'That is after you finish meal,' the mess worker said.

'Who are you? My Mother? I am finished. Give me two rasgullas,' she insisted.

'Only one per student,' he said as he placed a katori with one sweet on her

'Oh, come on, there are no limits on this disgusting sambhar but only one of

what is edible,' she said. The line grew behind us. The boys in line didn't mind.

They had a chance to legitimately stare at the best-looking girl of the batch.

'Give mine to her,' I said and regretted it immediately.
She'll never date you, it

is a rasgulla down the drain,
I scolded myself.

'I give to you,' the mess worker said virtuously as he placed the dessert on my
DX @ www.desibbrg.com

I passed my katori to her. She took the two rasgullas and moved out of the

OK buddy, pretty girl goes her way, rasgulla-less loser goes another. Find a corner to
sit, I said to myself.

She turned to me. She didn't ask me to sit with her, but she looked like she

wouldn't mind if I did. She pointed to a table with a little finger where we sat down
opposite each other. The entire mess stared at us, wondering what I had done to

merit sitting with her. I have made a huge sacrifice - my dessert - I wanted to tell
them.

'I'm Krish,' I said, doodling in the sambhar with my spoon.

'I'm Ananya. Yuk isn't it?' she said as I grimaced at the food's taste.

The Second Time Around by Mary Higgins Clark
Wild Fyre by Ike Hamill
Microsoft Word - Jacks-Marcy-Hunted-and-on-the-Run.doc by Owner
Crazy Horse by Larry McMurtry
Peace in an Age of Metal and Men by Anthony Eichenlaub
Home to Eden by Margaret Way
At the Queen's Command by Michael A. Stackpole
Finding Zach by Rowan Speedwell
Scavengers by Steven F. Havill
Russell Wiley Is Out to Lunch by Hine, Richard