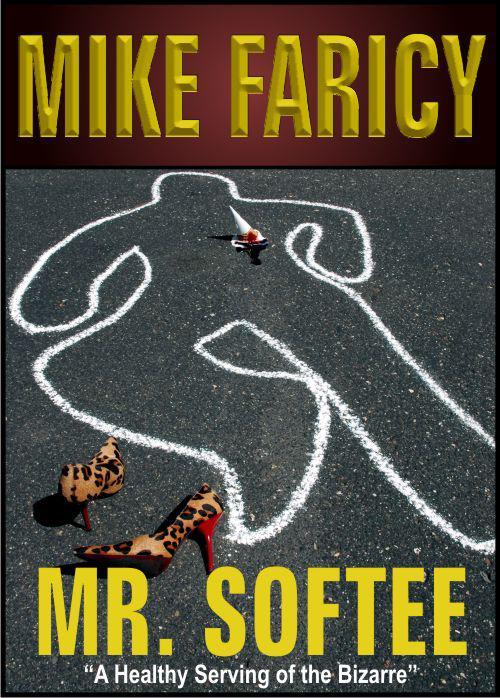 All rights reserved. No part of this publication may be reproduced, stored in a retrieval system, or transmitted, in any form or by any means, electronic, mechanical, photocopyin
g, recording or otherwise, without the prior and express permission of the copyright owner.

All characters in this book are fictitious, and any resemblance to actual persons, living or dead, is purely coincidental.

“The pretty girl took the soldier’s hand, and for the first time, in a very, very long time, he felt safe.”

“What did they do?”
Mr. Softee screamed, his bald head immediately going from beet red to dark purple. “You idiot. Did you hear anything I said? They tried to kill me for god’s sake.”

His real name was Weldon Sofmann
. Although he insisted I call him Mr. Softee he was anything but. Screaming made him even more red-faced than normal. His crimson face propped up on the pile of starched white hospital pillows looked even more outlandish. Blips on the monitor screens arraigned alongside his bed jumped accordingly with every outburst.

“I’m tell
ing ya they wanted to murder me. Only those brats showing up on their bikes stopped things from getting any worse.”

“What did the
police say?” I asked.

“The cops
! You think I trust them? They were probably in on the deal, the bastards,” he screamed.

“Oh, these god
damned things,” he reached up to yank the cord out of the monitor.

The young woman
introduced to me as Lola sat up just a little straighter in the vinyl visitor’s chair near the end of his bed. Using my acquired skills as a private investigator I deduced she was Mr. Softee’s daughter. She adjusted her blouse with both hands, pinched the cream-colored silk between thumb and forefinger, just above her belt line then tugged.

Each one of her elegant
, long red nails sported a delicate little gold design, and she seemed to function effortlessly despite the long-nail handicap. The tug exposed another inch or two of deep cleavage. She was beautiful, in a sort of peroxide way.

For the first time in twenty minutes she spoke, cautioning
Mr. Softee in an exceptionally high, squeaky, little-girl voice,

“That quack
? He should just stick to his job, which is getting me the hell out of here. Damn it, Haskins, they tried to kill me.”

Mr. Softee glared at me for a couple of long seconds.

“What in the hell am I paying you for? That’s what I want you to find out. You’re supposed to tell me just who in the hell did this.” With a wave of his hands Mr. Softee indicated the bandages wrapped around his left leg propped up on a series of pillows.

“Actually
, sir, no offense, but you aren’t paying me, at least you haven’t yet. The first I heard of this was the message from your daugh… from Lola last night.” I nodded at the smiling Barbie doll sitting up straight in the vinyl chair.

She winked back slowly
and licked her lower lip.

“S
o anyway, you haven’t paid me. Not that that’s the point. What makes you think this was intentional? I mean your car was….”

“They start at about one twenty. Damn it, grounds right there to shoot the bastards.”

“But what makes you so sure it wasn’t some idiot involved in a simple hit and run?” I asked.

“Simple! Does this look simple to you? I got a damn business to run. Think I can do that while I’m stuck in this nut house? Simple, he says, Jesus I ought to…”

“Thank you,
Mister Haskell, we’ll be in touch,” Lola squeaked in her cartoon voice then slinked to her feet. With the six-inch stiletto heels she stood about five foot eight. Her skirt was just a little longer than the black belt and rhinestone buckle wrapped around her slim waist. She extended her right hand. When I took it she rubbed the back of my hand with her left, then raised an eyebrow and flashed a lustful smirk.

Or was I just imagining
that?

Mr. Sof
tee looked out the window, unaware. His monitors had returned to a normal pattern.

“Let me see about clearing my calendar
, and I’ll get back to you tomorrow.”

“W
e look forward to it,” Lola smiled, still rubbing the back of my hand, in no apparent hurry to let go. She suddenly tickled the palm of my hand with her finger.

“Just find out who in the hell
did this?” Mr. Softee grumbled from his bed, then turned back to the window, clenching and unclenching his jaw.

I didn’t really have
a calendar, let alone one to clear. I popped by The Spot bar, just to see if anyone was looking for me. No one was.

Mr. Softee rule
d an empire of ice-cream trucks. A fleet of pink-and-blue trucks every parent in the seven-county metro area had come to despise. The trucks crawled through neighborhood streets playing a chimed version of “Oh where, oh where has my little dog gone?” until you wanted to scream.

Children ran back into their homes begging for two or three dolla
rs for one of Mr. Softee’s overpriced ice-cream treats. Frankly, there was a part of me that was more than a little amazed some crazed father hadn’t tried to kill Mr. Softee long before now. I decided to do some checking.

“Economic development,” the voice cooed into the phone.

“Who may I say is calling, please?
” You could almost hear the frost forming on the words. I knew it wasn’t going to work, but I foolishly tried anyway.

“I’m calling on behalf of Haskell Investigations,” I said
.

“And your
name?” she asked, a chilling accusation in her voice.

“Devlin Haskell,” I said grimacing, waiting for
the expected blast. I wasn’t disappointed.

“Oh, I didn’t recognize your voice
at first, just a cold? Hopefully.”

“Is this
Sandy?” I asked, hoping to charm my way past the minefield.

“Who, exactly, did you expect to be answering the phone?”

“I, I wasn’t sure. I thought it might be you, Sandy, but I really didn’t recognize your voice. It’s been awhile, you know?”

“Mmm-mmm
. Let me see if she can take your call. Hold please.”

I knew the
drill, I’d be on hold for three to five minutes, and Connie Ortiz would be unable to take my call. The truth was Sandy wouldn’t even try. Still upset about a minor fender bender I had driving her car a couple years ago.

We had been heading to my place
. Sandy way too over served to drive, so I thought I’d help. Under the circumstances, it had seemed like a good idea at the time to just walk away from the accident scene. At three in the morning we quietly staggered away from what was left of the parked car and Sandy’s damaged Toyota. No good deed goes unpunished.

“I’m sorry
, she must have stepped out. May I take a message and have her return your call?”

W
hy bother? It’s the same every time I call. I knew Sandy never tried to reach Connie Ortiz. If I leave a message, Sandy won’t deliver it. It served me right for calling Sandy’s PMS hotline I thought, then said,

“Okay, thanks for trying
Sandy. If you could have her call me? She’s got my number. Great to talk…”

Sandy
abruptly hung up. I’d have to reach Connie at home later tonight.

“You w
ant another one, Dev?” Jimmy, bartender extraordinaire, nodded toward my empty Leinenkugel’s glass.

“Thanks Jimmy, but I better not
. I’ve got a pretty busy day,” I lied.

“Really
? You got some business?” Jimmy sounded genuinely surprised.

“Yeah, checking a few things out for
Mister Softee, it shouldn’t take…”

“I could have killed that prick a half dozen different times when the kids were little. It never failed, one of his damn trucks always showed up just before dinner. Damn kids screaming for ten bucks worth of ice cream. Ten bucks, hell, we didn’t have a dollar to our name back then. And that song, still makes my blood boil, that dog song, you know, they got that chime thing going with the damn bells. Son of a bitch always seemed to park right in front of our house. God, I don’t miss those days,” he said shaking his head.

I made
a mental note not to mention Mr. Softee again.

“You know who works for
him, or did awhile back, Bernie?” Jimmy said.

“Bernie
? You mean the burnout?”

“Yeah,
you got him, Bernie Sneen. You know him, right?”

“Not really, except that he’s sort of missing a few cards from his deck.”

Well, yeah, anyway, he was driving one of those trucks last I heard. Might explain the drug use, listening to that damn dog song chiming away, it’d drive anyone nuts.”

“Bernie
? They let that guy near kids?”

I found Bernie Sneen
in a different bar. There were at least four places he was a daily regular. He was in the third place I checked, Dizzies.

You could say Dizzies was a bit low on ambience
, but then that would suggest there might be some. Dizzies was all business, and the business was drinking. The bar itself was no more than twelve feet wide from the back of the bar to the opposite wall. If you were looking for food, casual conversation, a fun night out, or pleasant company, this wasn’t the place.

It was dim, unfriendly
, and smelled like the men’s room at a bus station. Bernie Sneen sat three stools in from the front door, bathed in the light of the overhead television displaying a soundless episode of “Skating with the Stars.” He seemed to be muttering to himself as I climbed on the worn vinyl stool next to him.

He looked over at me and nodded, his lips moving but involved in some other
inner conversation. He put a hand up signaling me to wait a moment.

“What can I get you?”
the bartender asked a moment later.

“I’ll have a Leinen
kugel’s, give Bernie whatever he’s drinking.”

“Ouzo and Heineken’s,”
the bartender replied by way of explanation.

Bernie’s lips continued to move for another minute, until the drinks were delivered
. He raised his glass of ouzo, nodded, then took a sip.

“You’re that goofy P.I.,
right?” he asked after setting his shot glass down.

“Dev Haskell, we
’ve talked a couple of times, I think in The Spot,” I said trying to steer things in a little more positive direction.

Bernie nodded, then just stared at his beer.

“That bastard,” he said shaking his head.

“Yeah, Mister Softee. You still driving for him?”

“Nah, bastard
laid me off. Didn’t like me drinking while I was driving, I guess. Jesus, what was I supposed to do, crawling along them streets about two miles an hour.”