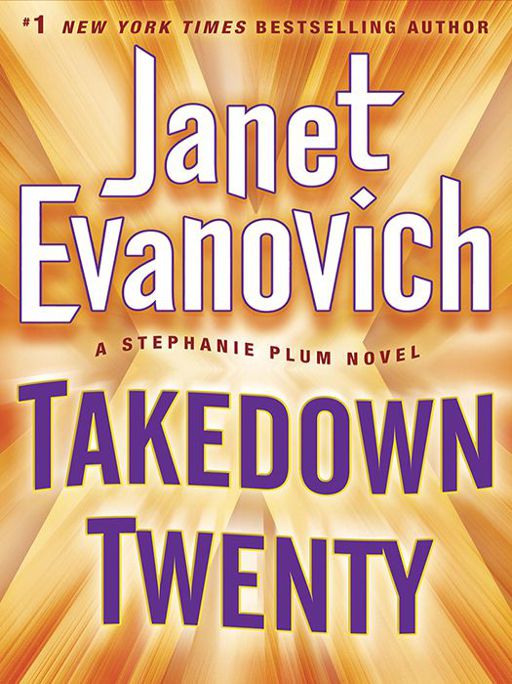 Takedown Twenty
is a work of fiction. Names, characters, places, and incidents are the products of the author’s imagination or are used fictitiously. Any resemblance to actual events, locales, or persons, living or dead, is entirely coincidental.

Published in the United States by Bantam Books, an imprint of The Random House Publishing Group, a division of Random House LLC, a Penguin Random House Company, New York.

B
ANTAM
B
OOKS
and the H
OUSE
colophon are registered trademarks of Random House LLC.

Excerpt from
The Heist

IT WAS LATE at night and Lula and I had been staking out Salvatore Sunucchi, better known as Uncle Sunny, when Lula spotted Jimmy Spit. Spit had his prehistoric Cadillac Eldorado parked on the fringe of the Trenton public housing projects, half a block from Sunucchi’s apartment, and he had the trunk lid up.

“Hold on here,” Lula said. “Jimmy’s open for business, and it looks to me like he got a trunk full of handbags. I might need one of them. A girl can never have too many handbags.”

Minutes later, Lula was examining a purple Brahmin bag studded with what Spit claimed were Swarovski crystals. “Are you sure this is a authentic Brahmin bag?” Lula asked Spit. “I don’t want no cheap-ass imitation.”

“I have it on good authority these are the real deal,” Spit
said. “And just for you I’m only charging ten bucks. How could you go wrong?”

Lula slung the bag over her shoulder to take it for a test drive, and a giraffe loped past us. It continued on down the road, turning at Sixteenth Street and disappearing into the darkness.

“I didn’t see that neither,” Spit said. “You want to buy this handbag or what?”

“That was a giraffe,” I said. “It turned the corner at Sixteenth Street.”

A black Cadillac Escalade with tinted windows and a satellite dish attached to the roof sped past us and hooked a left at Sixteenth. There was the sound of tires screeching to a stop, then gunfire and an ungodly shriek.

“Not only didn’t I see that giraffe,” Spit said, “but I also didn’t see that car or hear that shit happening.”

He grabbed the ten dollars from Lula, slammed the trunk lid shut, and took off.

“They better not have hurt that giraffe,” Lula said. “I don’t go with that stuff.”

I looked over at her. “I thought you didn’t see the giraffe.”

“I was afraid it might have been the ’shrooms on my pizza last night what was making me see things. I mean it’s not every day you see a giraffe running down the street.”

My name is Stephanie Plum, and I work as a bond enforcement officer for Vincent Plum Bail Bonds. Lula is the office file
clerk, but more often than not she’s my wheelman. Lula is a couple inches shorter than I am, a bunch of pounds bigger, and her skin is a lot darker. She’s a former streetwalker who gave up her corner but kept her wardrobe. She favors neon colors and animal prints, and she fearlessly tests the limits of spandex. Today her brown hair was streaked with shocking pink to match a tank top that barely contained the bounty God had bestowed on her. The tank top stopped a couple inches above her skintight, stretchy black skirt, and the skirt ended a couple inches below her ass. I’d look like an idiot if I dressed like Lula, but the whole neon pink and spandex thing worked for her.

“I gotta go see if the giraffe’s okay,” Lula said. “Those guys in the Escalade might have been big game poachers.”

“This is Trenton, New Jersey!”

Lula was hands on hips. “So was that a giraffe, or what? You don’t think it’s big game?”

Since Lula was driving we pretty much went where Lula wanted to go, so we jumped into her red Firebird and followed the giraffe.

There was no Escalade or giraffe in sight when we turned the corner at Sixteenth, but a guy was lying facedown in the middle of the road, and he wasn’t moving.

“That don’t look good,” Lula said, “but at least it’s not the giraffe.”

Lula stopped just short of the guy in the road, and we got out and took a look.

“Yeah, or maybe that thing implanted in his butt is a tranquilizer dart.”

“I didn’t see that at first, but you’re right. That thing’s big enough to take down a elephant.” Lula toed the guy, but he still didn’t move. “What do you suppose we should do with him?”

I punched 911 into my phone and told them about the guy in the road. They suggested I drag him to the curb so he didn’t get run over, adding that they’d send someone out to scoop him up.

While we waited for the EMS to show, I rifled the guy’s pockets and learned that his name was Ralph Rogers. He had a Hamilton Township address, and he was fifty-four years old. He had a MasterCard and seven dollars.

The EMS truck slid in without a lot of fanfare. Two guys got out and looked at Ralph, who was still on his stomach with the dart stuck in him.

“That’s not something you see every day,” the taller of the two guys said.

“The dart might have been meant for the giraffe,” Lula told them. “Or maybe he’s one of them shape-shifters, and he used to
be
the giraffe.”

The two men went silent for a beat, probably trying to decide if they should get the butterfly net out for Lula.

“It’s a full moon,” the shorter one finally said.

The other guy nodded, and they loaded Ralph into the truck and drove off.

“Now what?” Lula asked me. “We going to look some more
for Uncle Sunny, or we going to have a different activity, like getting a pizza at Pino’s?”

Truth is, I was going home to a bottle of champagne I had chilling in my fridge. It had been left on my kitchen counter a couple days before as partial payment for a job I’d done for my friend and sometime employer Ranger. The champagne had come with a note suggesting that Ranger needed a date. Okay, so Ranger is hot, and luscious, and magic in bed, but that didn’t totally compensate for the fact that the last time I’d been Ranger’s date I’d been poisoned. I’d been saving the champagne for a special occasion, and it seemed like seeing a giraffe running down the street qualified.

Lula drove me back to the bonds office, I picked up my car, and twenty minutes later I was in my apartment, leaning against the kitchen counter, guzzling champagne. I was watching my hamster, Rex, run on his wheel when Ranger walked in.

Ranger doesn’t bother with trivial matters like knocking, and he isn’t slowed down by a locked door. He owns an elite security firm that operates out of a seven-story stealth office building located in the center of Trenton. His body is perfect, his moral code is unique, his thoughts aren’t usually shared. He’s in his early thirties, like me, but his life experience adds up to way beyond his years. He’s of Latino heritage. He’s former Special Forces. He’s sexy, smart, sometimes scary, and frequently overprotective of me. He was currently armed and
wearing black fatigues with the Rangeman logo on his sleeve. That meant he was on patrol duty, most likely filling in for one of his men.

“Working tonight?” I asked him.

“Taking the night shift for Hal.” He looked at my glass. “Are you drinking champagne out of a beer mug?”

“I don’t have any champagne glasses.”

“Babe” covers a lot of ground for Ranger. It can be the prelude to getting naked. It can be total exasperation. It can be a simple greeting. Or, as in this case, it can just mean I’ve amused him.

Ranger smiled ever so slightly and took a step closer to me.

His brown eyes locked onto me. “I didn’t ask a question.”

“You were going to.”

“Well, don’t even think about it, because I’m not going to do it.”

“I could change your mind,” he said.

Okay, truth is Ranger
could
change my mind. Ranger can be very persuasive.

Ranger’s cellphone buzzed, he checked the text message and moved to the door. “I have to go. Give me a call if you change your mind.”

“Okay, wait a minute. I want to know the question.”

“No time to explain it,” Ranger said. “I’ll pick you up tomorrow at seven o’clock. A little black dress would be good. Something moderately sexy.”

And he was gone.

I DRAGGED MYSELF out of bed as the morning sun poured through the opening in my bedroom curtains. I showered, blasted my shoulder-length curly brown hair with the blow dryer, and pulled the whole mess back into a ponytail. I brushed my teeth, swiped some mascara onto my lashes, and went with cherry lip gloss.

Hunting down felons for my cousin Vinnie isn’t a great-paying job, but I make my own hours and I wear what’s comfy. A girly T-shirt, jeans, sneakers, handcuffs, and pepper spray, and I’m good to go.

I gave Rex fresh water and a Ritz cracker, grabbed the messenger bag I use as a purse, and took off for the office. I live in a second-floor one-bedroom, one-bath, no-frills apartment on the outskirts of Trenton. It’s not a slum, but it’s not high
rent either. Mostly my apartment building is filled with seniors who take advantage of the early-bird special at the nearby diner and live for the moment they’ll qualify for a handicap sticker on their car. They’re all heavily armed, so the property is relatively safe, if you don’t count shootings that are the result of mistaken identity due to cataracts and macular degeneration. My apartment overlooks the parking lot, which is fine by me because I can peek out once in a while to see if anyone’s stolen my car.

It was a glorious Tuesday morning in the middle of summer, and traffic was light thanks to the absence of school buses. I parked in the small lot behind Vincent Plum Bail Bonds. There were four spaces, and three were already filled. My cousin Vinnie’s Cadillac was there. Connie the office manager’s Toyota was there. And Lula had her red Firebird there. I added my rusted-out mostly white Ford Taurus to the group and went inside.

“That look like you didn’t get any last night.”

I went straight to the coffee machine. “I almost never get any. I’m used to it. Morelli is playing catch-up with his caseload.”

Joe Morelli is a Trenton plainclothes cop working crimes-against-persons. I grew up with Morelli, lost my virginity to him, ran over him with my father’s Buick in a fit of justifiable rage, and now years later he’s my boyfriend. Go figure. He’s a good cop. He’s a terrific lover. And he’s got a dog. He’s six feet
of hot Italian libido, with wavy black hair, a hard-toned body, and brown eyes that could set my pants on fire. He’s been sidelined with a gunshot wound, but now he’s back on the job, popping pain pills.