Read Enemy on the Euphrates Online

Enemy on the Euphrates 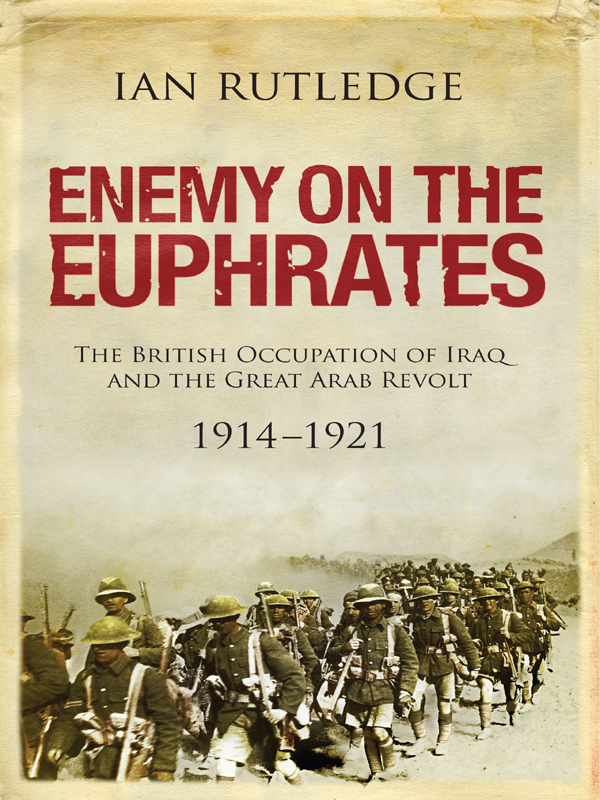 ENEMY ON THE EUPHRATES

Ian Rutledge has asserted his right under the Copyright, Designs and Patents Act, 1988, to be identified as the author of this work.

Every effort has been made to obtain necessary permission with reference to copyright material. The publishers apologise if inadvertently any sources remain unacknowledged and will be happy to correct this in any future editions.

First published 2014 in Great Britain by

A full
CIP
record for this book is available from the British Library.

Printed and bound by Bookwell in Finland

For Diana, as always.

And for my beloved children,
Joanna, Daniel, Zoe and Emilie

What we want is some kind of modicum of Arab institutions which we can safely leave while pulling the strings ourselves, something which won’t cost very much … but in which our influence and political and economic interests will be secure.

Whereas most westerners have no knowledge of the 1920 uprising, generations of Iraqi schoolchildren have grown up learning how nationalist heroes stood up against foreign armies and imperialism in towns like Falluja, Baquba and Najaf – the Iraqi equivalents of Lexington and Concord.

Eugene Rogan,
The Arabs: A History

PART ONE: INVASION, JIHAD AND OCCUPATION

4    Arab Mobilisation on the Euphrates

7    Imperial Objectives in the East

8    The Menace of Jihad and How to Deal with It

9    The Lieutenant from Mosul

10  The Peculiar Origins of an Infamous Agreement

18  The Independence Movement in Baghdad

20  Trouble on the Frontiers

21  The Drift to Violence

26  The Destruction of the Manchester Column

28  The Structures of Insurgent Power

29  Trouble on the Home Front

32  A Death on the Baghdad Road

Churchill as First Lord of the Admiralty, 1912

A Rolls Royce armoured car, used in Iraq in the 1920s

Iraq, within Its Postwar Mandate Borders, and Neighbouring Regions of Syria, Turkey and Persia

The Middle Euphrates Region, Epicentre of the 1920 Revolution

The Scene of the Manchester Column Disaster, July 1920: the Camp on the Rustumiyya Canal

This has been kept as simple as possible. The symbol ‘has been used for the letter ‘ayn and ’ for the glottal stop hamza. The feminine ending
taa marbuta
has simply been rendered as a final a (not ‘ah’ or ‘at’). No subscript or superscript marks have been used. When an Arabic word or name which has entered the English lexicon appears, its customary English spelling has been retained (e.g. sheikh, not
shaykh
).