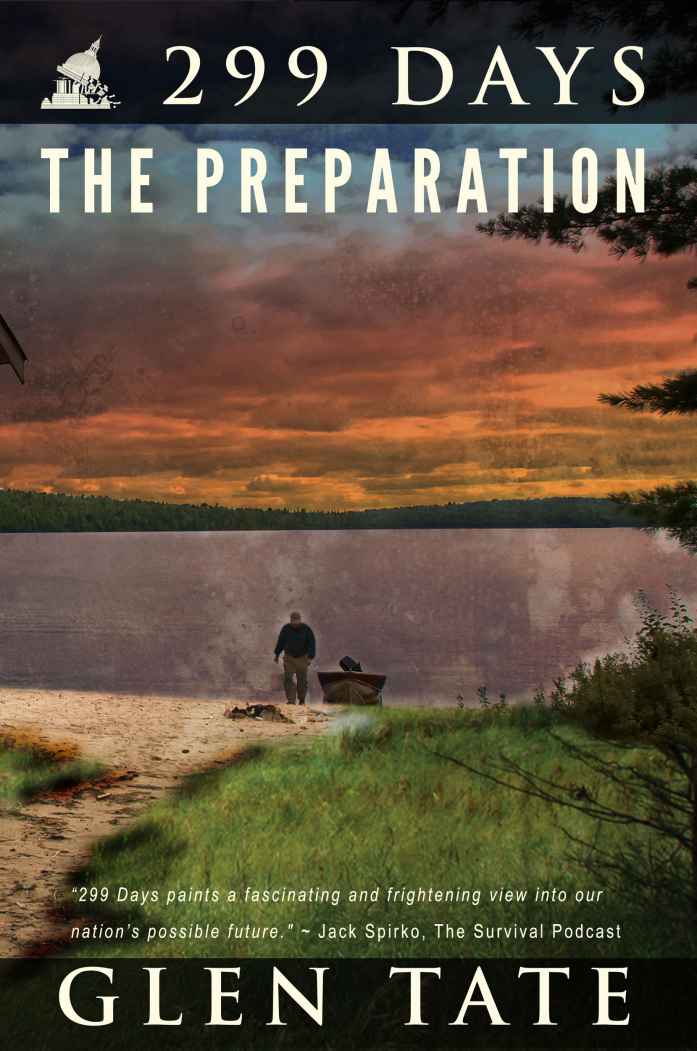 Prepper Press is a division of Northern House Media, LLC

What a Beret Can Do for a Loser

“You Gonna Eat That Pickle?”

A Country Boy Can Survive

You are the man. Do something.

A Hillbilly with a Law License

I Will Wear the Pants I Want to Wear.

That’s Our Money. We Need It.

Spiders in the Shed

It’s Going to Get Ugly.

People Get What They Deserve

The Waitin’ is the Hardest Part

We Have a Fight on Our Hands

From Chapter One to Chapter 299, this 10-book series follows Grant Matson and others as they navigate through a partial collapse of society. Set in Washington State, this series depicts the conflicting worlds of preppers, those who don't understand them, and those who fear and resent them.

Book One, THE PREPARATION, introduces Grant as a young boy and describes the life events that shaped him into becoming the average suburban man who can no longer ignore the voice telling him to get prepared for what is to come. This first book in the 299 Days series provides a front row seat to what happens to people who are mentally and physically prepared for a collapse, and what happens to those who are not.

For more about this series, free chapters, and to be notified about future releases, please visit
www.299days.com.

Glen Tate has a front row seat to the corruption in government and writes the
299 Days
series from his first-hand observations of why a collapse is coming and predictions on how it will unfold. Much like the main character in the series, Grant Matson, the author grew up in a rural and remote part of Washington State. He is now a forty- something resident of Olympia, Washington, and is a very active prepper. “Glen” keeps his real identity a secret so he won’t lose his job because, in his line of work, being a prepper and questioning the motives of the government is not appreciated.

His pants were falling down. Damn it. Stay up.

Grant Matson hated wearing a suit, and he hated a tuxedo even more. A tuxedo that was too big was even worse. His pants were several inches too big and his shirt was baggy and had about two inches too much collar. His bowtie looked silly cinched up in an attempt to hide the fact that the collar was too big. Oh well. Almost everyone else was in the same boat.

No one had clothes that fit anymore. It was a mixed blessing. Everyone lost some weight they probably didn’t need. The old way of living, like having plenty of food to make those clothes fit, was a thing of the past. But, things were getting back to a new kind of normal and there was enough to eat now. Things were getting better. Much better than they had been 299 days ago.

Two hundred ninety-nine days. His son, who loved to count days and could tell anyone how many were between any two given dates like he was a computer, told him earlier today that it had been 299 days since May 1. That was the day it all started. And now, just 299 days later, it was wrapping up, as symbolized by the event he was attending tonight. Thank God it hadn’t lasted longer.

There he was in their new house. “New house” used to be a happy term as in “we just bought a new house and it’s great.” It used to mean the fun of moving up and getting something better. That was the old America.

This new house, a “guesthouse”, wasn’t like that. It was a fine house; in fact, it was a little nicer than his old one. But it wasn’t his. It wasn’t the house his kids spent most of their childhood in. His wife didn’t like it. She missed the old house, but understood why they had the new one. Tonight, she was dropping the kids off at her parents’ who would be babysitting while they were out. He was all alone. He chuckled at how lucky he had been throughout this whole thing. He had almost been alone forever. In fact, twice he had almost been alone forever.

Tonight, Grant wasn’t alone. There were some plainclothes soldiers outside the guesthouse in inconspicuous places, guarding him. But no one was inside the house. Just him. It was so quiet. He felt alone.

In the downstairs bathroom of the guesthouse, Grant looked in the mirror to adjust his bowtie. He was the same guy in his mid-forties with brown hair. But wow. Look at that. His face looked so much thinner than just a few months ago. Grant barely recognized himself because he had finally shaved. He hardly recognized himself without that military “contractor” beard.

Grant had aged quite a bit in the past 299 days. His face was toughened, and he looked confident. Deadly confident; the kind of confidence that it takes to stand up to bullies and help people. His eyes were different than before the Collapse. There was a hint of loss in them. Not a cry-at-the-drop-of-a-hat kind of loss. His eyes showed that there was less of him now, that something had been lost. Taken from him.

Staring at the new him in the mirror, Grant got lost in memories. That was happening a lot lately. He would just lose his train of thought and drift into heavy thoughts, usually triggered by remembering someone or some event. Extremely vivid memories like waking from a realistic dream, in that first moment when the dream is so vivid it feels real, despite it being a crazy and unrealistic dream. The memories he was having were real, however. That’s why they were so vivid. And, in this case, reality had been crazy and unrealistic.

Grant looked again in the mirror and examined his tuxedo. It was symbolic of so much going on that night. He bought it about five years ago when he was climbing the ladder of law and politics in Olympia, the capitol of Washington State, and occasionally had to attend formal events. He would have fit in it just fine 299 days ago.

On this night, Grant was wearing a tuxedo to an event that warranted a tuxedo. It was the kind of night that only happens once in a lifetime, and never happens at all in the lifetimes of most people. Dinner tonight was a victory celebration. It was a victory in the biggest thing in his life or the lives of almost any American. He would be remembered throughout state history, at least as a small figure. He would have a school or something named after him. He should be happy, shouldn’t he?

This victory came at an enormous price. “Bittersweet” is a cliché, but it was true in this instance. Bitter because a lot of people died and suffered. Not billions of people like in some over-the-top apocalypse movie, but plenty of people. People Grant knew, some of them very well. Everyone knew many people who were killed, widowed, maimed, went crazy, were ruined, or had their families broken up. Grant thought about sweet Kellie. All she had ever wanted was a good man. He died in the war.

Almost everyone had been hungry and afraid. Grant didn’t lose his wife, but they weren’t nearly as close as before the Collapse and it would probably stay that way for the rest of their lives. His daughter was no longer the bubbly outgoing teenage girl she had been; now she was quiet and deadly serious most of the time. She had seen and done things that no teenage girl, or anyone for that matter, should have to experience. His son had faired okay as far as Grant knew.

His old home was trashed so he was borrowing this new one, the “guesthouse,” from someone who was now in jail. Grant would rebuild his real home but it would take a while. Things like police protection, farming, and rebuilding roads were a higher priority than remodeling. His old home was a symbol of what everyone was going through. It would take years of hard work to rebuild his town, state, and his country. Actually, the countries.

The “sweet” part of bittersweet was that some very bad things ended. Some wrongs were made right, and some guilty people paid for what they did. They couldn’t hurt people anymore. Some people who thought they were losers found out they were heroes. People came together and really lived for the first time in their lives. Lifelong friendships were formed between people who just 299 days ago wouldn’t have talked to each other. And, Grant felt guilty for thinking about himself, he was absolutely certain that he’d made the most out of his life. He saw dozens of “coincidences” in his life that were planted years ago and then sprang up at just the right time so some absolutely amazing things could be accomplished. He was being used to do great things. Grant was just a guy with no particular skills who didn’t exactly lead the perfect life.

All Grant did right was have a little faith and listen to the outside thoughts, even when they said things that seemed crazy at the time. There was no denying that, for nearly forty years, the “coincidences” had been pointing him in the direction of helping people and fixing a bunch of really terrible things that needed to be fixed. He was here for a reason.

Snapping out of the vivid memories and back into getting dressed for the big event, Grant realized that all the bad things that had been fixed were what he needed to focus on tonight. Measures would be put in place to prevent the bad things from happening again, he hoped. That was his new job and the reason for the dinner tonight. I have to get this right, Grant thought. I can’t screw this up. Please help me, he thought. Actually, he prayed that.

Grant looked at the invitation on the sink in the bathroom of the guesthouse. The invitation was beautiful, made of parchment paper and written in calligraphy. That was a rare sight nowadays, something ornate like that. He picked it up and soaked it all in. He was holding an invitation to dinner with the Interim Governor before the Inaugural Ball. It was a very select group; just a handful of the Governor’s oldest friends and closest advisors. It was a dinner to chart out the future of New Washington State. The inauguration was for “Governor Benjamin Trenton.” Ben’s name looked so funny like that. More of those vivid memories were coming back.

The Phantom Killer: Unlocking the Mystery of the Texarkana Serial Murders: The Story of a Town in Terror by James Presley
How to Heal a Broken Heart by Kels Barnholdt
Taboo Kisses by Helena Harker
The Two Devils by David B. Riley
Doctor Who: The Leisure Hive by David Fisher
Final Curtain: An Edna Ferber Mystery (Edna Ferber Mysteries) by Ed Ifkovic
Forbidden, Tempted Series (Book 1) by Selene Charles
For His Pleasure (Dominated By The Billionaire) by Adriana Hunter
Lion of Caledonia: International Billionaires VII: The Scots by Caro LaFever
September Starlings by Ruth Hamilton