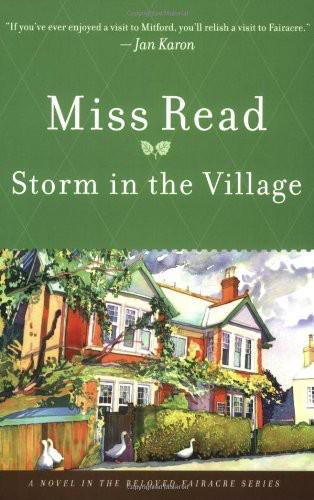 Trouble brews in the tiny country village of Fairacre when it is discovered that Farmer Miller’s Hundred Acre Field is slated for real estate development. Alarming rumors are circulating, among them the fear that the village school may close. The endearing schoolmistress Miss Read brings her inimitable blend of affection and clear-sighted candor to this report, in which a young girl finds her first love, an older woman accepts a new role in life, and the impassioned battle to save the village from being engulfed is at the forefront of every villager’s mind.

Storm in the Village 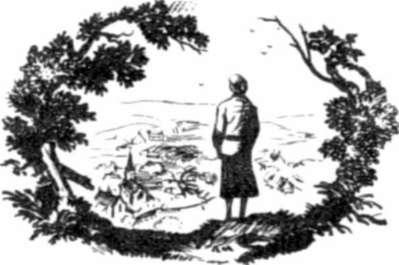 Straws in the Wind

Straws in the Wind 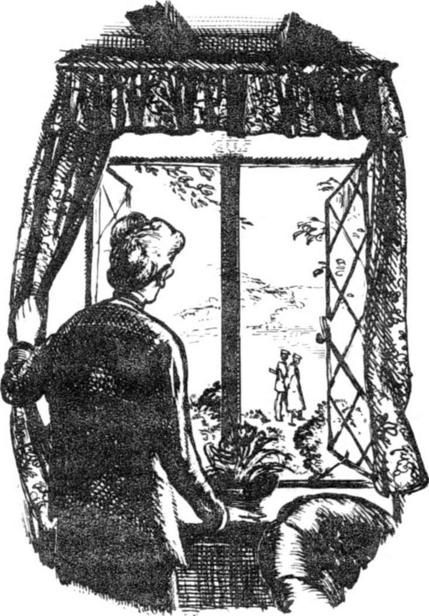 M
ISS CLARE'S
thatched cottage lay comfortably behind a mixed hedge of hawthorn, privet and honeysuckle, on the outskirts of Beech Green. The village was a scattered one, unlike its neighbour Fairacre, where Miss Clare had been the infants' teacher for over forty years, only relinquishing her post when ill-health and the three-mile bicycle journey proved too much for even her indomitable courage.

The cottage had been Miss Clare's home for almost sixty years. Her father had been a thatcher by trade, and the criss-cross decorations on the roof still testified to his skill, for they had been braving the weather for over twenty years, and stood out as clearly now, on the greying thatched roof, as they had on the first day of their golden glory. It was true that here and there, particularly round the squat red-brick chimney, the roof was getting a little shabby. Miss Clare often looked at it ruefully, when she went into the back garden to empty her tea-pot or to cut a cabbage, but as long as it remained weather-proof she had decided that it must stay as it was. It would cost at least two hundred pounds, she had been told, to rethatch her home; and that was out of the question.

One breezy March morning, when the rooks were tumbling about the blue and white sky, high above the cottage, Miss Clare was upstairs, making her lodger's bed. A shaft of sunlight fell across the room, as Miss Clare's thin, old hands smoothed the pillow and covered it squarely with the white honeycomb quilt which had once covered her mother's bed.

No one would call Miss Jackson tidy, thought Miss Clare, as she returned books from the floor to the book-shelf, and retrieved shoes from under the bed. It was one of the few things that grieved her about her young lodger. Otherwise she was thoughtful, and very, very clever with the children.

Miss Clare imagined her now, as she tidied the girl's clothes, standing in front of her class of young children, as she too had done for so many years, at Fairacre School. Prayers would be over, and as it was so fine, no doubt they would be getting ready to go out into the playground for physical training. Often, during the day, Miss Clare would look at the clock and think of the children at Fairacre School. The habits of a lifetime die hard, and to have the present infants' teacher as her lodger, to hear the school news, and the gossip from the village which, secretly, meant more to her than the one in which she lived, was a source of great comfort to her.

She picked a small auburn feather from the floor. A Rhode Island Red's feather, noted Miss Clare's country eye, which must have worked its way from the plump feather bed.

Outside, the birds were clamorous busy with their nest building, and reconnoitring for likely places in the loose parts of the thatched roof. Miss Clare crossed to the window and let the feather float from it to the little lawn below. Before it had had time to settle, three excited sparrows threw themselves upon it, squabbling and struggling. Miss Clare, sunning herself on the window-sill, smiled benevolently upon them, and watched her feather borne off in triumph to some half-made nest nearby.

It was then that she noticed the men.

There were two of diem, pacing slowly, side by side, along the edge of Hundred Acre Field which lay on the other side of Miss Clare's garden hedge.

It was one of several unusually large fields which formed part of old Mr Miller's farm. Harold Miller had lived at the farmhouse at Springbourne all his life, and had farmed the same land as his father before him. Now, at eighty, he was as spry as ever, and nothing escaped his bright, birdlike eye. His two sons, much to his sorrow, had shown no desire to carry on the farming traditions of the family, but had sought their fortunes, with fair success, elsewhere, one as an engineer and the other as an architect.

Hundred Acre Field and its spacious neighbours were among the more fruitful parts of Mr Miller's farm. Many of his acres were on the bare chalk downs which sheltered his home from the northerly winds. Here he kept a sizeable flock of sheep, rightly renowned for many miles around. At the foot of the downs the plough soon turned up chalk, and on a dry day, the white, light dust would blow in clouds from these lower fields. But those which lay furthest from his farm, near Miss Clare's cottage, had at least two feet of fertile top soil, and here old Mr Miller grew the oats and wheat which Miss Clare watched with an eye as keen and as appreciative as their owner's.

At the moment, Hundred Acre Field was brushed with a tender green, the tiny spears of wheat showing two or three inches above the soil. Beyond this field had lain a large expanse of kale, on which Mr Miller had been feeding his flock during the hardest months of the winter.

The two men walked slowly towards the kale stumps, stopping every now and again, to bend down and examine the soil among the wheat rows. Miss Clare's long-sighted eyes noted their good thick tweeds approvingly. The wind was still keen, despite the bright sunlight, and she liked to see people sensibly clad. But their shoes grieved her. They were stout enough, to be sure; but far more suited to the pavements of Caxley than the sticky mud of a Beech Green field. And so beautifully polished! Such a pity to mess them up, thought Miss Clare; and what a lot of mud they would take back into that neat little car that stood on the green verge of the lane, quite near her own front gate!

What could they be doing? she wondered. There they stood, with their backs to her, gazing across the grand sweep of the fields to the gentle outline of the hazy downs beyond. One had drawn a paper from his pocket and was studying it minutely.

'What a busybody I'm getting!' said Miss Clare aloud, pulling herself together.

She took a last look round Miss Jackson's room, then crossed the little landing to her own at the front of the cottage.

She had just finished setting it to rights, and was shaking her duster from the window, when she saw the two men again. They were standing now by the car and, Miss Clare was glad to see, they were doing their best to wipe the mud from their shoes on the grass.

'Though why they don't pick a little stick from the hedge and dig it all away from their insteps, I really don't know,' said Miss Clare to herself. 'They
will
make a mess in that nice little car!'

She watched them climb in, turn it adroitly, and move off in the direction of Fairacre.

'Curiouser and curiouser!' quoted Miss Clare to the cat, who had arrived upstairs to see which bed had a pool of sunlight on it, and would be best suited to his morning siesta. But his luck was out, for his mistress headed him firmly to the stairs, and followed him into the kitchen.

'Ministry of Agriculture, I should think,' continued Miss Clare, lifting the cat on to his accustomed chair near the stove, from which, needless to say, the outraged animal jumped down at once, just to assert his independence.

His mistress was gazing, somewhat uneasily, out of the kitchen window. She was still preoccupied with the arrival of the two strangers.

Veronica by Mary Gaitskill
Forests of the Heart by Charles de Lint
Silent Night by Rowena Sudbury
Beyond the Power of Your Subconscious Mind by Jensen, C. James
The Hairball of Horror! by Michael Broad
Tempted in the Night by Robin T. Popp
As a Favor by Susan Dunlap
What He Didn't Say by Carol Stephenson
When Perfection Fails by Tyora Moody
Somewhere on Maui (an Accidental Matchmaker Novel) by Neal, Toby