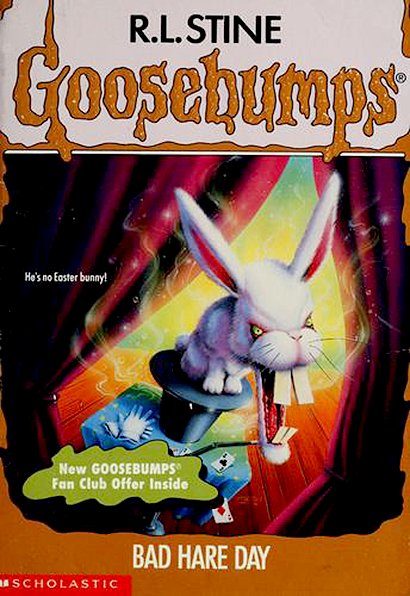 “Pick a card, any card.” I spread out the deck of cards in front of Sue
Mailer, facedown. She giggled and picked one.

“Don’t show it to me,” I warned her. She glanced at the card, keeping it
hidden from me.

A small crowd of kids gathered on the school steps to watch. School was out
for the day. Sue showed them her card.

I love doing magic tricks—especially in front of an audience. My dream is
to be a great magician like my idol, Amaz-O.

I’ve been playing around with stage names. My real name is Tim Swanson—but
that’s way too boring for a professional magician. I’ve been thinking of calling
myself Swanz-O. My best friend, Foz, thinks Swanz-O sounds like a laundry
detergent.

“Now, Sue,” I said in a louder voice, so everybody could hear me. “Put the
card back in the deck.”

Sue slipped the card in with the others. I shuffled the deck and tapped it
three times. “I will now make your card rise to the top of the deck,” I
announced.

Tap, tap, tap. I picked up the top card and showed it to Sue. “Was this your
card?” I asked her.

Her eyebrows shot up in amazement. “The three of clubs!” she cried. “That was
my card!”

“How’d you do that?” Jesse Brown asked.

“Magicians never reveal their secrets,” I said, bowing. “And now, for my next
trick—”

“I know how he did it.” My little sister, Ginny, suddenly popped up in the
crowd. The sound of her scratchy voice made my hair stand on end. She loves to
spoil my magic shows.

But a true magician doesn’t let anything throw him. I grinned my biggest,
fakest grin at the little brat.

Some of the kids laughed. I pretended to laugh, too. “Ha, ha. Isn’t she a
riot?”

Everybody says Ginny looks like an angel. She has long, wavy blond hair, rosy
cheeks, big blue eyes. People always ooh and aah over her.

No one ever oohs and aahs over me. I’ve got curly light-brown hair and hazel
eyes. I’m twelve, which Mom says isn’t a “cute age”.

My nose is long and curves up at the end like a hot dog. Ginny likes to flick
the end of my nose with her finger and say, “Boi-oi-oing.”

Her nose is small and perfect, of course.

I tried to continue my show, Ginny or no Ginny. I slipped the deck of cards
into my pocket and yanked out my magic scarf. “Now, be amazed as I—”

Ginny reached into my pocket and snatched out the cards. “Look, everybody!”
she cried, showing them the cards. “
All
the cards are the three of
clubs!”

Ginny started passing the cards around so everyone could see.

“Hey! Give those back!” I protested. I grabbed the cards away. It was true.
Every single card in the deck was the three of clubs. But no one was supposed to
know that.

I whipped out my magic rings—two large silver hoops hooked together. The
kids quieted down a little.

“These silver rings are locked together,” I declared. “They’re completely
solid—linked together forever!” I tugged on them to show that they wouldn’t
come apart.

Then I handed them to Jesse. “Try to pull the rings apart,” I told him. He
pulled hard. He pulled lightly. He pulled hard again. He jangled them around.
The rings stayed hooked together.

I took them back. “The rings will never come apart,” I said. “Unless I say
the magic words.” I waved one hand over the rings. “Hocus pocus!” I gently
pulled the rings apart. A couple of kids clapped.

“You’re not going to fall for
that
old trick, are you?” Ginny mocked.
“You want to know how he does it?” She grabbed the rings away and began to
demonstrate. “They’re trick rings—”

“I will now make my lovely assistant disappear!” I cried, shoving Ginny
aside. “Beat it!”

She karate-kicked me in the stomach.

“Oof!” I doubled over. Everybody laughed and clapped.

I clutched my stomach. Some trick.

Stupid Ginny and her karate kicks. Why did Mom have to take her to that
martial-arts school? My life has been miserable ever since. She’s only ten, and
she fights way better than I do. I’ve got the bruises to show it.

“Kick him again!” somebody yelled.

“Try it, and I’ll tell Mom where that dent in the refrigerator door came
from,” I warned her.

She backed off. She knew Mom would kill her for karate-chopping the fridge
just because we were out of ice cream.

The kids drifted away.

“See you tomorrow, Tim,” Sue said. Everybody began to head for home.

“Thanks for wrecking everything, Ginny,” I snapped.

She flicked my nose. “Boi-oi-oing.”

“Stop it!” I swatted her away. “You’re definitely going to get it. I’m
telling Mom about the fridge for sure.”

“Go ahead,” she taunted. “But if you do, I’ll give you the freezer chop.” She
waved her arms through the air, making those weird karate noises.
“Wah wah wee—ah!
Right to the neck. You’ll never walk again!”

She trotted away. “See you at home, Swanz-O!”

This is what I have to deal with every day of my life. A little sister who
could kill me if she wanted to. What can I do? I’m helpless against her.

That’s one reason I want to be a magician. Maybe Ginny can karate-chop my
arms off—but not if I make her disappear first!

I sighed and buttoned up my denim jacket. It was almost four o’clock and getting chilly. The wind had picked up, too. When
is it going to get warm? I wondered. It’s the end of March—it’s supposed to be
spring already.

Foz’s real name is Foster Martin. But he doesn’t look like a Foster. He’s a
Foz. He’s chubby, with a brown buzz cut. His shirt is always untucked.

“Mrs. Pratt made me stay after school,” he replied, making a disgusted face.

Foz has to stay after school almost every day. He always says it’s for no
reason.

I picked up my magic kit and started down the school steps. Foz followed. We
left the school grounds and walked toward town.

“What were
you
doing at school so late?” he asked.

“I was trying out a few magic tricks. Ginny told everybody how they work. It
was a disaster.”

“You need better tricks,” Foz said. “Lots of kids have the same magic kit as
yours.”

“You’re right,” I agreed, rattling my kit. “This is amateur stuff. I’m ready
for some
real
magic tricks. Professional ones.”

“Like a hat you can pull a rabbit out of.”

“Or that spinning box Amaz-O has,” I added.

Amaz-O was my hero—the greatest magician ever. “Did you see him on TV last
week? His assistant stepped into a big black box. Amaz-O spun it around three
times, and she disappeared!”

“I know. I wish I could go. But the tickets cost twenty-five dollars.”

We turned onto Bank Street and headed toward the center of town. It wasn’t on
the way home, but Foz knew what I was doing. Malik’s Magic Shoppe was on Bank
Street. I stopped in there at least once a week, just to drool over the cool
tricks they had.

“Malik’s has a bunch of new tricks,” I told Foz. “Designed by Amaz-O
himself.”

“They are.” I reached into my pocket to see how much money I had. Five bucks.

I stuffed the bill back into my pocket. “You’ve got to see this stuff,
anyway. There’s a table—you put a plate or something on it—it can be
anything you want. The plate will rise up over the table and float!”

“How does it work?” Foz asked.

“I don’t know. Mr. Malik wouldn’t tell me. He said you have to buy the trick
to find out.”

“How much does it cost?”

Foz rolled his eyes. “I guess you’ll have to stick with card tricks.”

A little bell rang as we opened the door to Malik’s. I breathed in the musty
smell of the shop. It was jam-packed with old tricks, new tricks, magic books,
and costumes. There were even cages in the back for rabbits and doves. Mr. Malik
sold everything.

I called out, “Hi, Mr. Malik.” He stood behind the cash register. He was a
short, bald old man with a fat stomach.

I waited for Mr. Malik to say, “What’s new, Magoo?” in his gravelly voice.
That’s how he greets all his regular customers.

I called out, “Hi!” again, but he didn’t answer. He just stood there and
grunted.

“Mr. Malik?” Foz and I crept closer to the counter.

Something was sticking out of his stomach. A sword!

He clutched the handle of the sword and moaned in pain.

Someone had stabbed him!

Foz and I froze in fear. I let out a gasp—but I was too frightened to move.
Foz’s whole body trembled.

Mr. Malik uttered another groan. Then his expression changed. He pulled out
the sword—and he tossed it to me.

Mr. Malik laughed. He rubbed his round stomach, which hadn’t been stabbed at
all. “What’s new, Magoo?” he chuckled. “Get a load of that trick sword. Just got
it in today.”

I tested the sword against my own stomach. It had a sliding blade. I pushed
the blade into the handle, then let go. It popped out again. Very cool.

Foz fingered the blade. “Think of the tricks you could play on Ginny with a
sword like this!”

He hung the sword on the wall behind him. “All right. Take your time and look
around. But would it kill you to actually
buy
something once in a while?”

Mr. Malik always said that, too.

I wandered to the back of the shop. I checked out a rack of magician’s
jackets. I pulled a sparkly blue tuxedo jacket off the rack and tried it on. It
had a trick sleeve for hiding things.

I stared at myself in the mirror. I pretended to announce myself. “The
Amazing Swanz-O!”

Foz shook his head in disgust. “That name is so lame.”

“Yeah, you’re right.” I thought of another name. “How about ‘Swanson the
Magnificent’?”

He tried on a top hat and added, “You need something cooler, like ‘Tim the
Destroyer’.”

“Hey, boys.” Mr. Malik shuffled toward us. He held out two tickets.

“Take these, if you want them,” he said. “Two free passes to Amaz-O’s magic
show tomorrow night.”

An Evening of Magic

“Thanks Mr. Malik! I can’t believe we’ll get to see Amaz-O in person!” I
gushed. “Tomorrow night!”

“Tomorrow night?” Foz frowned at his ticket. “I can’t go. My aunt and uncle
are coming over. It’s my mother’s birthday.”

“So? This is a once-in-a-lifetime chance! Your mother has a birthday every
year.”

Foz stuffed the ticket into my palm, shaking his head. “I know my mom—and
she won’t see it that way. Anyway, tomorrow night is a school night.”

I’d forgotten about that. I hoped my mom would let
me
go. Ten o’clock
was pretty late to go out on a school night.

She has to let me go, I decided. She just
has
to. What kind of
horrible mother would keep her son from seeing his hero in person? Only a really
mean, monstery mother.

My mother is a grump, but she’s not a monster.

I took off the blue jacket and hung it back up on the rack. A large wooden
box caught my eye. It was the size of a coffin, brightly painted with red and
yellow stars. I lifted the lid.

The box was empty, lined with blue velvet on the inside. “What’s the box do,
Mr. Malik?” I asked.